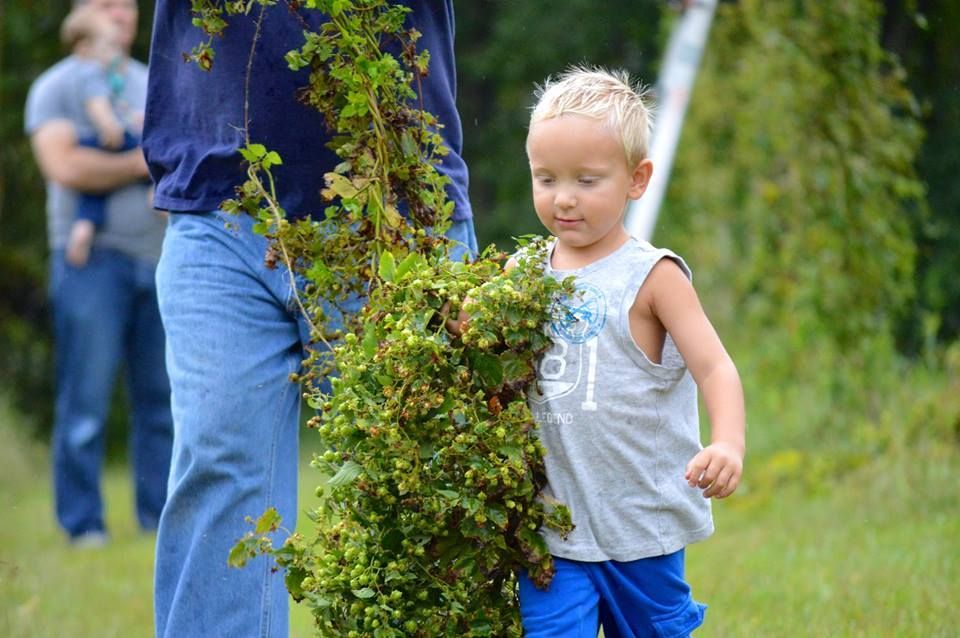 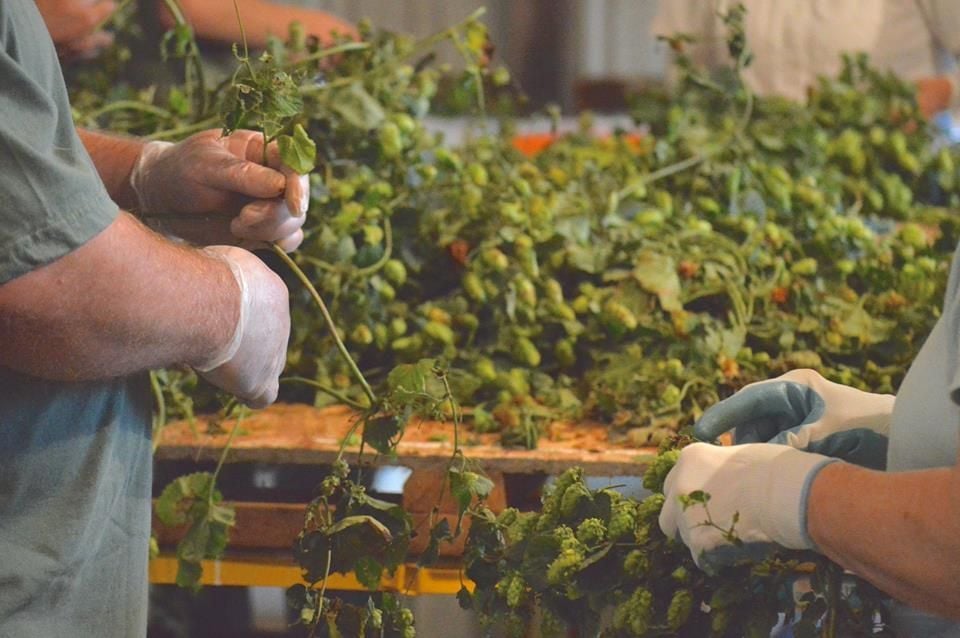 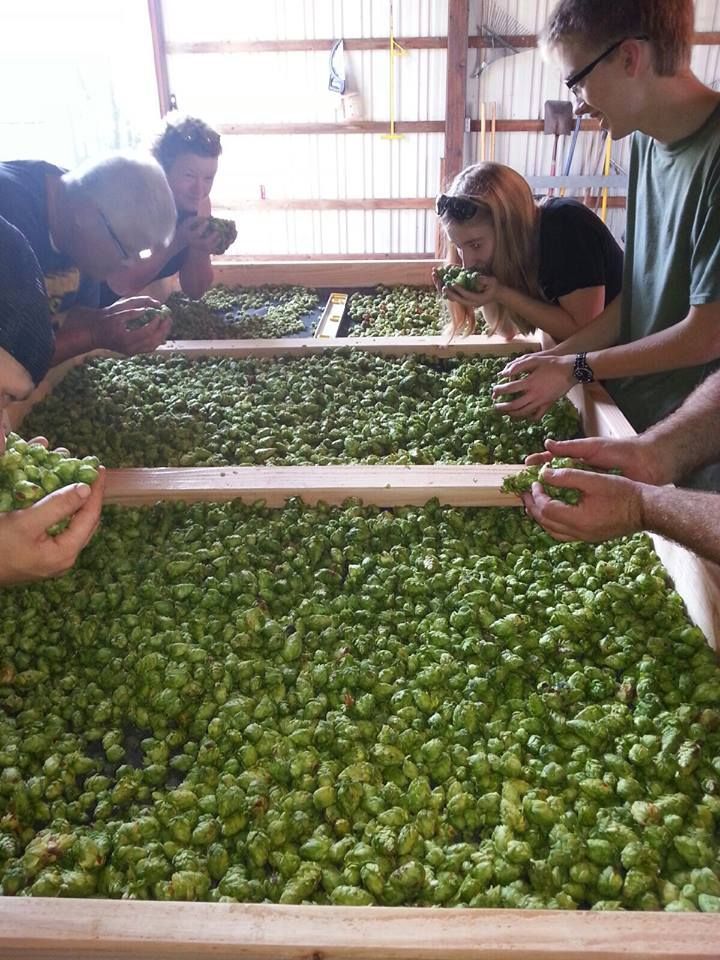 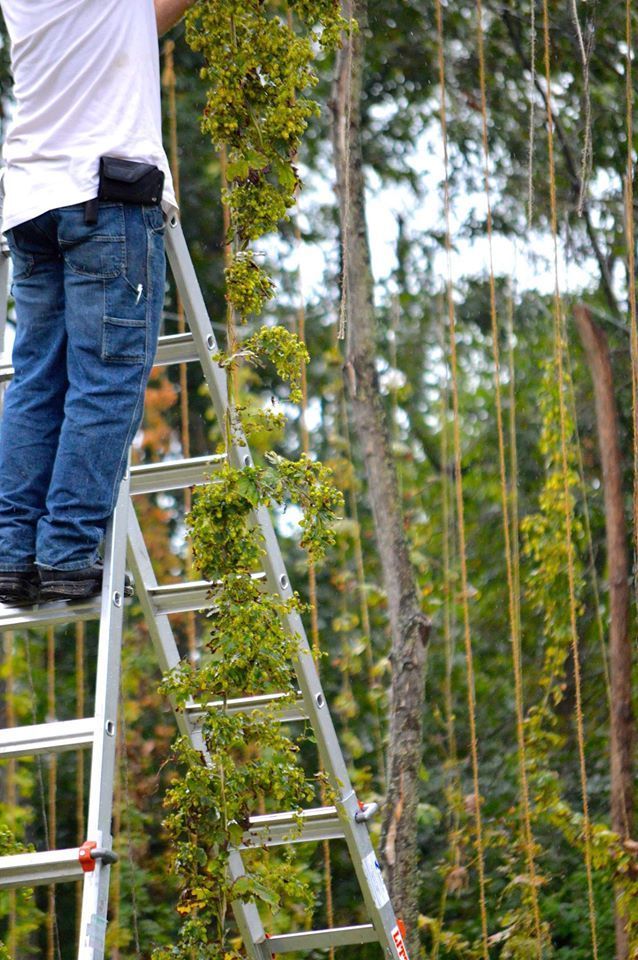 Howe Farms, in Winfield, and Cone Keepers Hop Yard, in DeMotte, are among about a half dozen farms statewide that are now growing hops, the flowers that give craft beers – especially India Pale Ales – aromatics and bitter, citrusy and lemony flavors.

Hops were once grown mainly in the Pacific Northwest, but the craft beer industry has boomed nationally to where it now produces 24.5 million barrels a year, generates $22.3 billion in sales and holds 21 percent of the market share. More local hops farms have sprung up across the country to serve craft breweries, which often champion a "buy local" ethos.

Sugar Creek Hops, a large hop farm in Thornton in central Indiana, estimates the 90 or so craft breweries in Indiana produce 121,000 barrels of beer a year, and therefore consume an estimated 145,200 pounds of hops.

Howe Farms started in Lake County in late 2013 and Cone Keepers Hop Yard launched in Jasper County in early 2014, but both are still ramping up. Hops plants, budding vines which twirl around tall trellises, need up to four years to mature and produce full yields.

Steve Howe started a trial with 150 plants, originally focusing on the Cascade, Centennial, Chinook and Nugget varieties. He's since doubled the size of the farm to two-and-a-half acres, and added Cashmere, Tahoma and Sorachi Ace hops.

"We're as large as I'd like to get," he said. "We're a small local farm, and we've got to have room for some other things."

Howe for instance is interested in growing pumpkins brewers could use for seasonal beers, peaches that could be put into ales and cucumbers that could add more flavor to kolschs. He's also raising herbs and vegetables that could be served at local restaurants.

"We are doing tomatoes, peppers, radishes, carrots, basil, cilantro, dill, a lot of different things like that," he said.

Howe is currently supplying Four Fathers Brewing in Valparaiso and Route 2 Brews in Lowell with hops from the farm that his family started tilling in 1951. He has also supplies Crown Brewing with maple syrup from its trees. He's looking to supply more local breweries as the crop matures, and said the challenge will be to prove that local farms can provide a consistent supply.

"It allows us to be commercial, yet we're still in that boutique market where we're providing a handful of breweries with hops," he said. "As a business we'll sell to anyone, but we'd like to focus on Northwest Indiana. As I kid I grew up in the Region, and want to keep this community-based and as close to home as possible."

They also can be used as wet hops where they're picked off the vine for harvest ales, said Justin Arthur, a longtime home brewer who cut his teeth on Sierra Nevada and started Cone Keepers Hop Yard in Demotte. He's growing 15 different varieties of hops, including an acre of Sorachi Ace.

"It's gaining in popularity because it's a unique hop with sophisticated lemongrass, citrusy and drill flavors," he said. "It's good in a saison or an ale or a single IPA to showcase the flavor."

Cone Keepers has supplied Pokro Brewing Co. in Griffith, the Guardian Brewing Co. in Muncie, Ironwood Brewing in Valparaiso and Route 2 in Lowell. The farm should be able to produce up to 2,000 to 3,000 pounds of hops a year when the hop flowers mature.

Northwest Indiana isn't perfect for hops growing because of humidity and pathogens, but it is nevertheless well-suited for it because it's in the same latitude range as the Pacific Northwest and the length of days is similar, Arthur said. Purdue University has been providing hops growers with technical assistance to get the industry rooted here.

"We have a friendship and help each other out," Arthur said.

Arthur sees more local breweries buying locally grown hops because of a preference for fresh and local ingredients that has even started to extend to the barley used in beer.

"It has to be that way," he said. "It's better for the taste, and in line with the craft movement. We want to give breweries the best taste and freshness."

The Purdue University board of trustees honored James B. Dworkin, a longtime member of the Purdue community and chancellor of the North Centra…

And The Big Sell winners are ...

MERRILLVILLE — For the first time in the six-year history of The Big Sell, audience members’ votes resulted in a tie Saturday that propelled 1…

CROWN POINT — The Region has seen an explosion of craft brewers over the past few years, and the popularity of the industry was evident Saturd…

Hop farms not taking off in Illinois despite craft beer boom

CHICAGO — The hop farming craze has yet to fully take root in Illinois even though Chicago's craft beer scene is rich and growing.

Brown’s Chicken may taste better, but it’s no longer available anywhere in Indiana.

Ironwood Brewing Company is celebrating its sixth anniversary in Valparaiso.

It's been a big year for craft brewing in Northwest Indiana. Here are some of the biggest stories to hit the Region.

50 craft beers of the South Shore

This series, 50 Craft Beers of the South Shore, highlights an interesting brew from Region breweries. Here's a look at what we sampled. Cheers!