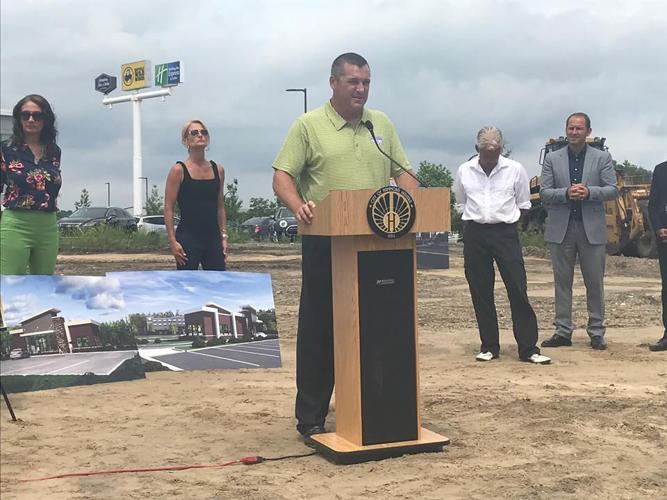 Hammond Mayor Thomas McDermott Jr. touts the investment that has come to Oxbow Landing in Hammond. 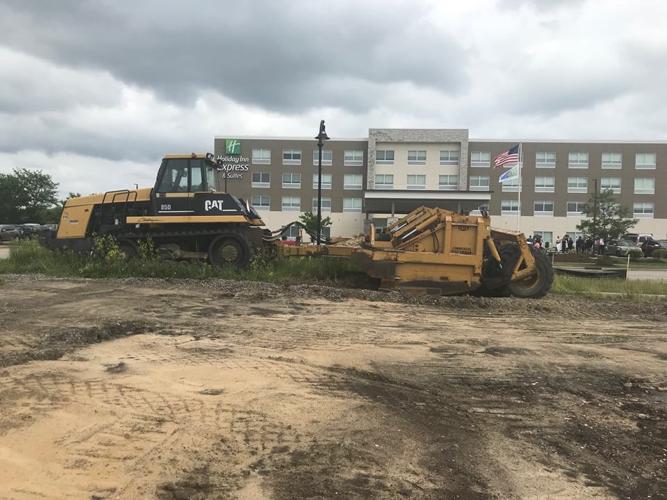 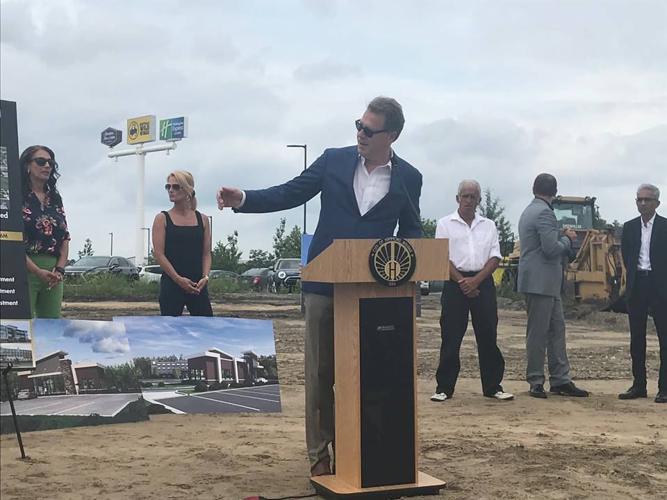 Hammond's decision to buy and tear down the notorious River Park Apartments on the banks of the Calumet River more than a decade ago continues to pay dividends.

The city spent $20 million to acquire and raze the crime-ridden apartment complex in 2004 and has since lured more than $46 million in private investment to the site, including offices, hotels, a craft brewery and a Buffalo Wild Wings.

On Tuesday, Hammond welcomed a new $8.2 million Holiday Inn Express and broke ground on a $14 million project at Oxbow Landing at Kennedy Street and the Borman Expressway that will include an office building and four outlots that will become restaurants or retail stores. The various businesses at Oxbow Landing employ nearly 300 people and could employ up to 500 once the latest round of development is finished.

"I don't know if the city has ever done a groundbreaking and ribbon-cutting at the same time before," Hammond Director of Economic Development Anne Anderson said. "Oxbow Landing is about the synergy of all these developments. It's what's made this area so successful."

Oxbow Landing is currently home to the BW3, a Hampton Inn, the acclaimed Byway Brewing and the 37,000-square-foot 2929 Carlson Drive class A office building that's 100 percent occupied after opening a year ago.

That success led ATG Real Estate Development Principal Eric Gastevich to look to build a sister 37,000-square-foot office building at 2901 Carlson Drive that will cost an estimated $7 million and open next year. The project will include four outlots for businesses interested in catering to the heavy traffic on the nearby Borman Expressway.

"There's strong interest from restaurants," Gastevich said. "And we look forward to having first-class tenants to occupy this first-class office building."

Northwest Indiana Forum President and Executive Director Heather Ennis said such office developments were needed to create more white-collar jobs in the Region, particularly with the planned demolition of the Twin Towers in Merrillville.

"Manufacturing is our backbone, but this helps diversify our economy," she said.

Hammond Mayor Thomas McDermott Jr. said it was a huge benefit that the Oxbow Landing development was bringing new law firms and other professional workplaces to the city.

"When I was campaigning I listened to people saying we had to do something about the River Park Apartments," he said. "One little speck was taking up a lot of city resources, from police and fire to code enforcement and animal control."

"This was a problem area 15 years ago, and now it's thriving," he said. "It's brought in millions in investment and created jobs. It's given people hope in our city and turned a negative into a positive. This is what it's all about. It takes money, guts and support, but if you do it the right way you can stand here and be proud. The people of Hammond may be grateful for this development for generations to come."

From Northwest Indiana's urban core to the suburban communities, visible, tangible improvement can be found around nearly every corner in the Region.

Indiana's manufacturing sector has been undergoing the longest expansion of employment in state history, adding jobs for nine straight years, …

A safe manufacturer plans to open a fulfillment and call center at a former book warehouse in Hammond, where it will hire 28 workers.

Several major Region employers scored highly on the Best Places to Work for Disability Inclusion, an annual ranking by the Disability Equality…

UPDATE: Bodybuilder overpowers, pins down would-be carjacker in Dyer: 'It was crazy'

An extremely muscular self-described athlete overpowered, slammed to the ground and pinned down a would-be carjacker who allegedly flipped a s…

Munster-based NorthWest Indiana Bancorp, the parent company of Peoples Bank, has declared a dividend of 30 cents per share.

Off Square Brewing recognized for one of state's best burgers

A Region burger was named among the state’s 10 best.

HAMMOND| A slew of new restaurants have recently opened in Hammond, including the sit-down Stuffed Pepper Greek restaurant and Chicago's legen…

A new co-working space is bringing business people together in one of Northwest Indiana's newest Class A office buildings.

It's the fifth acquisition in the history of the Munster-based bank, which was founded in East Chicago in 1910. All the acquisitions have taken place since 2013, and Peoples Bank will have tripled the size of its balance sheet since then.

Why you should start repaying your loans early

Why you should start repaying your loans early

Gas prices back on the rise in the United States

Gas prices back on the rise in the United States

Hammond Mayor Thomas McDermott Jr. touts the investment that has come to Oxbow Landing in Hammond.