A group of representatives of Northwest Indiana businesses, non-profit and academic organizations and local governments traveled to Pittsburgh during the fall as part of a One Region trip to learn about that city's success in attracting new residents. 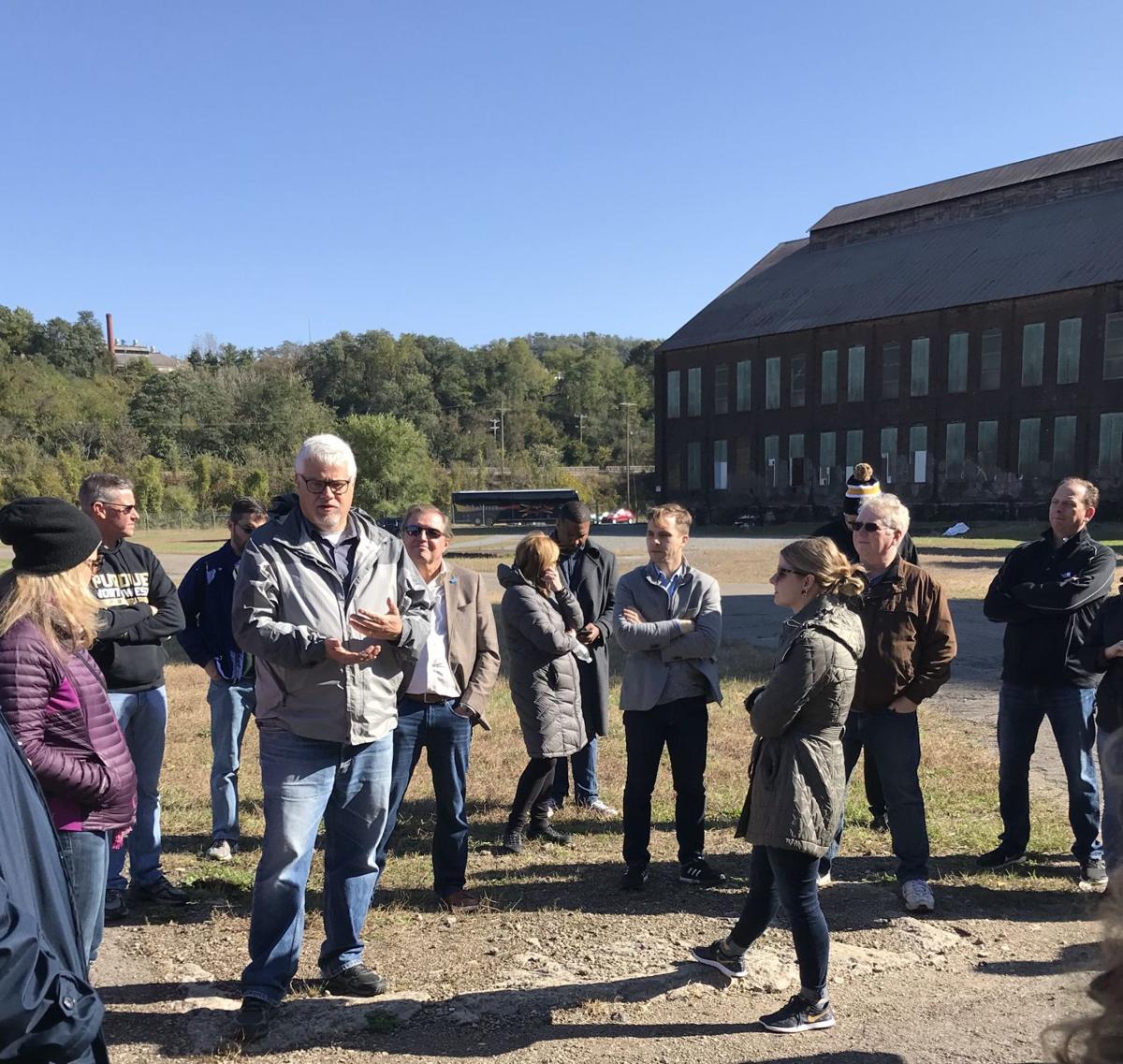 A One Region-sponsored trip to Pittsburgh included a visit to the old Carrie blast furnace, now an industrial museum and home to the arts.

An autumn trip to Pittsburgh has some Region public officials, businesspeople and non-profit leaders thinking about how Pennsylvania's steel city can provide inspiration for Northwest Indiana.

The three-day trip was organized by One Region to examine first-hand how Pittsburgh reversed decades of declining population to emerge in recent years as a magnet for new businesses and residents.

"Recognizing that Pittsburgh's story is not identical to our story, there were many lessons and best practices to learn from Pittsburgh's success to improve our future," One Region President and CEO Leah Konrady said.

The 40 people visiting Pittsburgh stayed in a neighborhood where public-private partnerships have spurred growth, visited a technology-based business incubator, and saw how an industrial heritage can be incorporated into a diversified future.

"We wanted to learn how the city transformed itself from severe population loss to attracting young professionals," Konrady said.

The One Region group stayed in an Ace Hotel in the East Liberty neighborhood, which grew as a diverse residential and commercial section of Pittsburgh through the mid-20th century but fell into decline in the 1960s and 1970s. Its redevelopment in recent decades has been spurred by public and private investment and the nonprofit corporation East Liberty Development.

The notion that public-private projects can provide the impetus for growth -- an "if you build it, they will come" approach -- was the theme of a tour led by Nate Cunningham of East End Development Partners, part of the team that turned the neighborhood's old YMCA into the Ace Hotel.

Konrady said the work in East Liberty has parallels to the work on transit development districts associated with the South Shore Line's commuter rail expansion projects.

"Overall, the lesson was to talk with the community to understand their needs, make a start, and focus on a small area before branching out," Konrady said.

Africa Tarver, executive director of planning and development for the city of Hammond, said a deep knowledge of a neighborhood and its history is crucial.

East Liberty has seen a resurgance in commercial and residential development in recent decades. Nearby, Bakery Square is home to a $350 million redevelopment centered on an old Nabisco factory. The "lifestyle center" is now home to Google offices and other research-and-development facilities, as well as residences and retail. The area includes a significant University of Pittsburgh presence, with Carnegie Mellon University nearby.

While the new economy has made a foothold in Pittsburgh, its old economy hasn't been forgotten.

Rivers of Steel and local heritage

"Heritage areas can be conceptually ambiguous or vague, and experiencing Rivers of Steel through their programming helped our delegation think through how a heritage area could play a role in Northwest Indiana," Konrady said.

The Calumet Collaborative, a nonprofit engaged in forming partnerships among governments, businesses and other organizations in the bi-state Calumet area, is one of the organizations working on creating a heritage area. Its executive director, Sarah Coulter, said the Pittsburgh visit helped enlighten the One Region group as to what a heritage area can contribute.

Rivers of Steel representatives gave the One Region group a river-based tour of the city after their arrival. Pittsburgh's three rivers -- the Allegheny, Monongahela and Ohio -- were important in development of the city's steel industry, just as Lake Michigan was in Northwest Indiana's, and in recent decades Pittsburgh and other groups have been successful in reclaiming industrial space for public or other repurposed use.

"I think the best thing was to see their faces light up in recognition of what we have in the Region," Coulter said.

The One Region group spent time at the old Carrie Blast Furnaces, the last of the famous Homestead Works furnaces that now hosts music and art and is "basically one giant steel artifact," Coulter said.

Coulter said their local tour guides "were very proud Pittsburghers" and the Rivers of Steel heritage area helped provide the basis for that pride.

"Our experience with Rivers of Steel opened our eyes as to what we could do in Northwest Indiana with some of our assets that we once thought of as eyesores," Konrady said.

A feasibility plan for a Calumet National Heritage Area has been approved by the National Park Service, which oversees the program but does not directly administer heritage areas. Coulter said supporters hope to have legislation introduced in the U.S. Congress in January that would officially designate the Calumet area, though approval is not expected in the near future.

One Region's Pittsburgh trip was the second of a planned three to cities seen as benchmarks for Northwest Indiana. Last year, One Region visited Newark, Jersey City and other New Jersey communities near New York. A trip to Denver is planned for next year.

The city of Denver and its suburbs offered 40 Region public officials and businesspeople lessons in revitalizing underperforming assets, lever…

Former Pittsburgh mayor to One Region: Partnerships and vision critical in remaking a community

Professionals to Watch: Leah Konrady's focus is growing the Region

The talent war is a hot topic as places are becoming more competitive in how to attract people. Talent attraction is a critical factor in grow…

A group of representatives of Northwest Indiana businesses, non-profit and academic organizations and local governments traveled to Pittsburgh during the fall as part of a One Region trip to learn about that city's success in attracting new residents.

A One Region-sponsored trip to Pittsburgh included a visit to the old Carrie blast furnace, now an industrial museum and home to the arts.