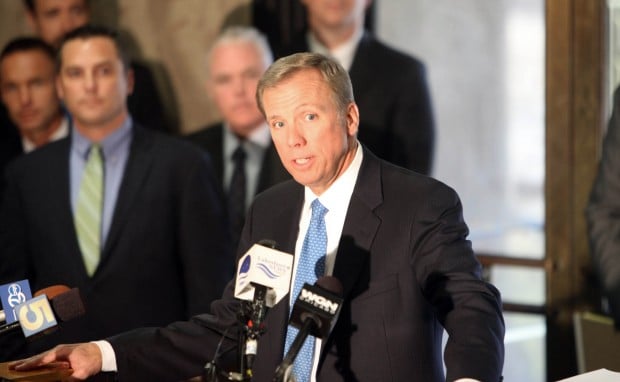 Robert Felgenhauer, vice president of transportation and distribution for Potash Corp., speaks Tuesday morning during a news conference at Hammond City Hall to announce the intent to build a new 136,000-square-foot storage facility in the city's Gibson Yard. Hammond Mayor Thomas McDermott Jr., far left, also was on hand for the announcement. 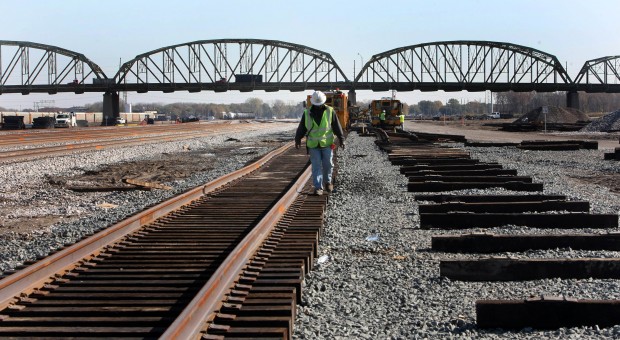 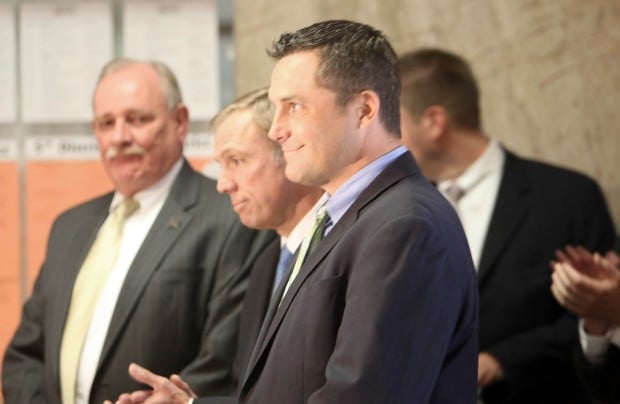 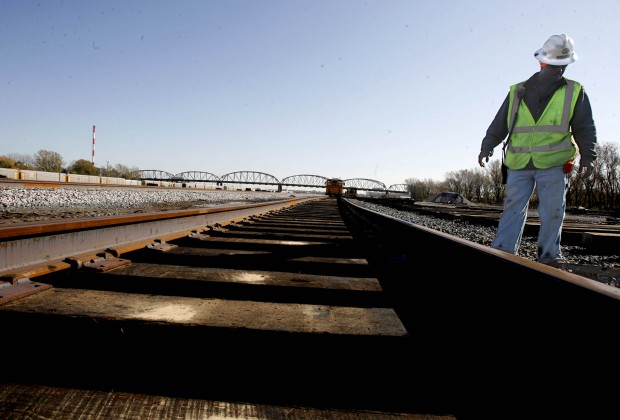 HAMMOND | Northwest Indiana landed the most recent in a string of rail development projects Tuesday, with Potash Corp. announcing it will locate a major rail transfer facility at Gibson Yard.

"After an extensive search, we decided on Hammond, Ind., because of its location, its railroads and its skilled labor force," Potash Vice President for Transportation and Distribution Robert Felgenhauer said in front of a crowd of smiling city and railroad officials at City Hall.

Potash will spend $64 million on a new 136,000-square-foot transfer facility, with Indiana Harbor Belt Railway investing $9 million there and the city of Hammond spending $5 million in federal and other funds for demolition and other work.

"A lot of people are fighting for jobs like those that are coming to Hammond, Ind., right now," said Mayor Thomas McDermott Jr., just one week away from Election Day, when he will make his third bid for the office.

It will take 225 construction workers to build the Potash facility and 60 more for the railroad construction, said Phil Taillon, Hammond director of planning and development. Once the facility is up and running, 25 permanent employees will be needed for the Potash warehouse and on the railroad.

McDermott emphasized the construction jobs will be filled by union workers under local hiring ordinances.

"Some people in Indianapolis have said companies will not locate here because of what they call labor 'aggression' in Northwest Indiana," said Randy Palmeteer, business manager for the Northwestern Indiana Building and Construction Trades Council. "And looked what happened."

Palmeteer was parodying a passage in Gov. Mitch Daniels new book, "Keeping the Republic: Saving America by Trusting Americans," where the governor refers to union "aggression" as a barrier to state's effort to land new jobs for Northwest Indiana.

Potash Corp., of Saskatoon, Canada, is the world's largest fertilizer producer. The company is in the midst of a $7.5 billion expansion of its North American mining operations, Felgenhauer said. The company searched throughout the Midwest for a suitable place to locate a rail transfer facility so it could get product to Eastern markets more efficiently, he said.

After finishing their announcement at the podium, McDermott and Felgenhauer signed the agreement cementing the deal to cheers from city employees, council members and others gathered for the event.

Region officials long have said they want to ink more deals like the Potash one to capture value from the torrent of freight trains that pass through Northwest Indiana every day.

In August, Canadian National Railway Co. announced it would locate a locomotive repair shop and expand its classification yard at Gary's Kirk Yard. The railroad said it planned to invest $165 million in the project and add 250 jobs there.

The railroad already has spent $11 million this year expanding its auto transfer yard, which is the largest in the nation, Roots said.

In addition, Hammond's Taillon said the Potash move and expansion of a tax increment financing district there will pave the way for an estimated $130 million more in anticipated development. The city has talked to several interested companies, but Taillon and other officials would not name them.

Infrastructure improvements along the Summer Street corridor will be financed by $16 million in property taxes collected from Potash over the next 20 years, which will be used to pay off tax increment finance bonds, Taillon said. In addition, the Potash project will generate an estimated $3.2 million in tax collections for state and city coffers during the construction phase, he said.

City officials want to demolish the former Glidden Paint factory at Hump Road as part of the project. A Dec. 1 order to repair hearing for its owners may result in the city taking ownership of it, Taillon said.

Officials and companies are saying these rail projects will bring jobs and tax revenues to Northwest Indiana, allowing the region to capitalize on the torrent of freight trains that pass through every day.

Nov. 1: Potash Corp. and Indiana Harbor Belt Railway announce they will invest a combined $73 million in a transfer facility at Hammond's Gibson Yard; 285 construction jobs and 25 permanent jobs will be created.

Aug. 2, 2011: Canadian National Railway Co. announces it will spend $165 million at Gary's Kirk Yard. The railroad plans to move a locomotive repair shop there as well as expand the existing classification yard, increasing employment at the yard by 250 people.

June 21, 2011: The LaPorte County Board of Commissioners approve $12 million in financing to extend a rail line into the Kingsbury Industrial Park while developer Halfwassen Group seeks to round up tenants.

Feb. 6, 2011: Norfolk Southern Railroad inks a deal with Port of Indiana at Burns Harbor to provide all switching services at the port, in a move the port and railroads say will increase business opportunities there.

Feb. 20, 2010: The Federal Railroad Administration announces approval for a $71.4 million project to reconfigure Porter Junction in order to speed Amtrak passenger and freight trains in and out of Chicago. Transportation officials are hopeful agreements with railroads can be reached as associated projects in Illinois and Michigan are under way. INDOT estimated the project will create 703 construction jobs.

"Our staff is vaccinated, but I am concerned some folks will return to avoiding indoor dining," said Brent Brashier, co-owner and chief barbecue officer of Doc's Smokehouse and Craft Bar.

Public meetings will give people the opportunity to learn about, comment on possible traffic mitigation strategies.

Shipments rose by 52% at the Port of Indiana-Burns Harbor in June and are up significantly this year.

Ford is recalling 774,696 Explorer Sport Utility Vehicles made at the Chicago Assembly Plant over a seized cross-axis ball joint issue.

A maker of handcrafted whiskey could become even more of a destination for residents of Northwest Indiana and the Chicago area.

Truck drivers went on strike over a proposal to increase their health insurance premiums.

Union truck drivers, route drivers, merchandisers, and other delivery personnel working at the Pepsi bottling plant in Munster are going on strike Monday after rejecting the company's final contract offer.

Robert Felgenhauer, vice president of transportation and distribution for Potash Corp., speaks Tuesday morning during a news conference at Hammond City Hall to announce the intent to build a new 136,000-square-foot storage facility in the city's Gibson Yard. Hammond Mayor Thomas McDermott Jr., far left, also was on hand for the announcement.