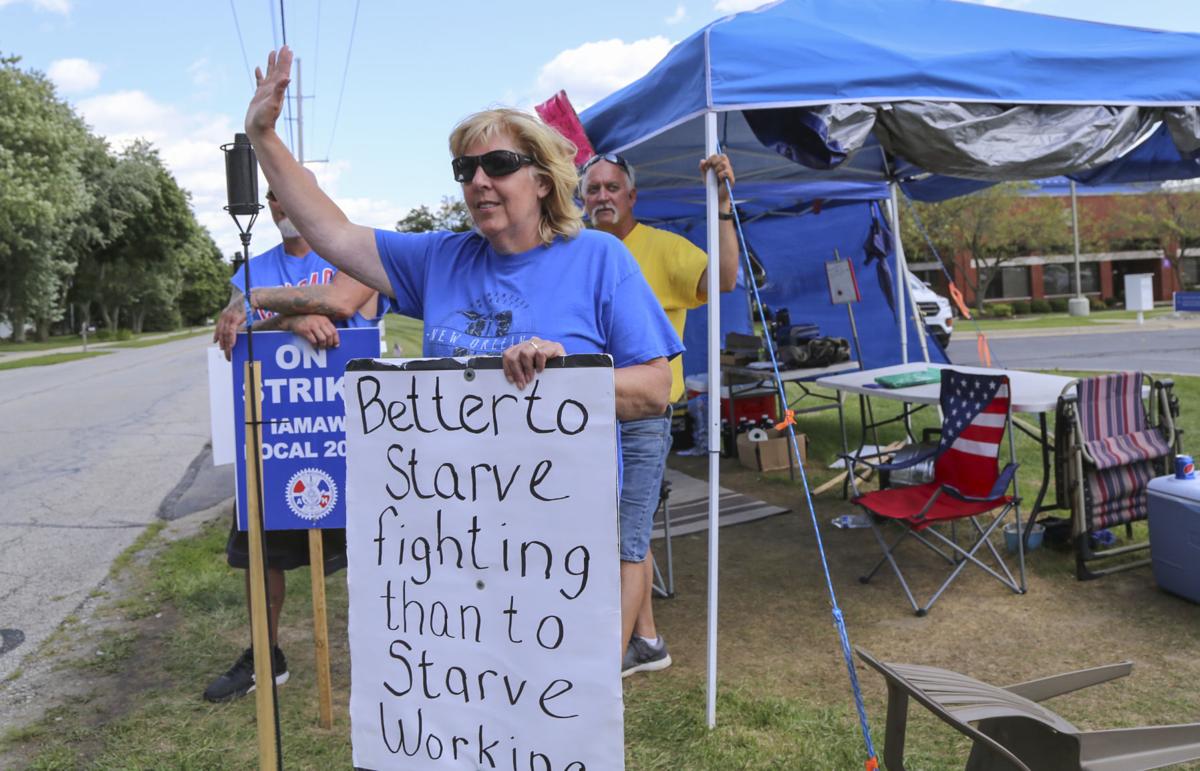 Workers wave to passing motorists along Evans Avenue while picketing in August outside the Regal Beloit plant in Valparaiso. 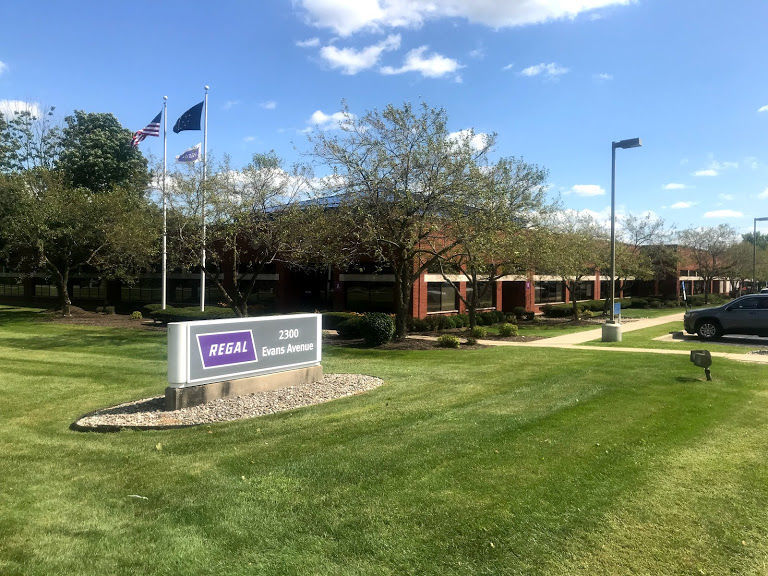 Regal Beloit reached an agreement with the International Association of Machinists Local 2018 on the closing of its Valparaiso plant. 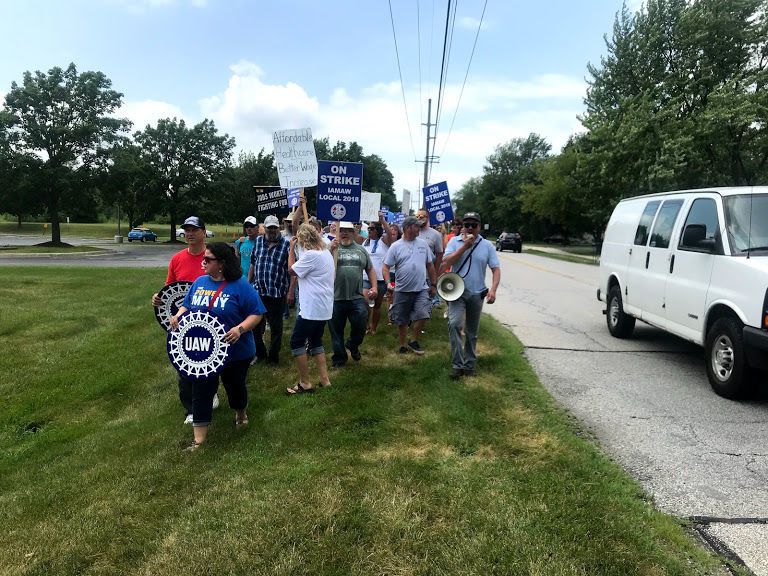 Regal Beloit reached an agreement with the International Association of Machinists Local 2018 on the closing of its Valparaiso plant, where workers had been striking.

Regal Beloit and a union local reached an agreement about the closing of a helicopter bearing factory that will cost about 160 to 170 workers their jobs.

The Wisconsin-based company decided to shutter the plant at 2300 Evans Ave. in Valparaiso that's part of a 109-year-old manufacturing operation after workers there went on strike for two months over low wages and high out-of-pocket health care expenses. Regal Beloit has not yet determined when the factory will close.

"No closure date has been set, as Regal is working to fulfill its obligations to customers and other stakeholders," Regal Beloit Business Development & Investor Relations Vice President Robert Cherry said. "The associates are encouraged to apply at any time for open positions at our Monticello, Indiana, or any other Regal operation."

Workers went on strike at the former McGill Manufacturing plant June 30 and then decided to end the strike in late August after Regal said it would close the plant so the two sides could resume negotiations in the hope of saving the factory. But the only agreement that was reached was on the terms of the closing.

"Regal is, unfortunately, still moving forward with closing the plant," International Association of Machinists & Aerospace Workers spokeswoman LaToya Egwuekwe-Smith said. "However, they have not yet said when. An effects agreement covering severance and benefits was reached with the company and approved by the membership."

Neither the company nor the union disclosed the terms of the agreement.

The bearings manufacturing operation was founded by James McGill as the Crescent Co. in 1905 and later rebranded as the McGill Manufacturing Co. It made many different products over the years, including golf clubs, Levolier pull chain switches, wire guards for lamps, socket components, coloring fluid for incandescent light bulbs, and bearings for U.S. Army tanks during World War II.

McGill Manufacturing was once one of Porter County's largest employers with 1,500 workers. It went on to build additional plans in Taiwan, El Paso, Texas, and Malden, Culver and Monticello in Indiana. It was acquired by Emerson in 1990 and made the headquarters of Emerson Power Transmission Division.

In recent years, McGill's former Valparaiso factory has served the aerospace industry, providing bearings to companies like Sikorsky Aircraft and Bell Helicopter that make civilian and military helicopters, including Apaches for the U.S. Army. It was acquired by the multinational electric motors manufacturer Regal Beloit five years ago.

Workers at the Evans Avenue plant voted 99-5 to go on strike this summer, expressing concerns with wages as low as $15 and out-of-pocket health care expenses as high as $20,000 a year for a family. They picketed and held several rallies outside the facility for two months, and even marched outside the company's corporate headquarters in Beloit, Wisconsin.

VALPARAISO — Robert Christopher, a Valparaiso resident who worked on a punch press making helicopter bearings for McGill Manufacturing for eig…

After two months, striking Regal Beloit workers have agreed to return to work so the International Association of Machinists and Aerospace Wor…

UPDATE: Regal Beloit to shut down Valparaiso plant; at least 160-170 will lose their jobs

Let there be learning.

The Indiana Manufacturers Association and Conexus Indiana are partnering on workforce development initiatives to prepare more Hoosiers to work in the field of advanced manufacturing.

The state fined Family Express $11,625 for safety violations at its bakery in Valparaiso.

Next May, Regal Beloit America plans to permanently close a helicopter bearing factory that's been a major employer in Valparaiso for more than a century after workers went on strike last summer.

The new 4,200-square-foot restaurant in St. John has 55 employees and five drive-thru lanes for quicker service.

Regal Beloit, which has operations with Valparaiso, is merging with the power transmission manufacturing arm of Rexnord Corp. in a deal valued at $3.69 billion.

Workers have been filling orders remaining orders for bearings for Black Hawk helicopters and winding down operations at a factory long run by McGill Manufacturing, which was founded in Valparaiso 116 years ago and has been an institution ever since.

Regal Beloit factory lays off more workers as it winds down

Regal Beloit continues to lay off workers at the aerospace bearings plant long run by McGill Manufacturing that it's in the process of shutting down.

Laid-off Regal Beloit workers qualify for federal trade adjustment benefits that include job training, health insurance and financial assistance as they transition in the workforce.

Workers wave to passing motorists along Evans Avenue while picketing in August outside the Regal Beloit plant in Valparaiso.

Regal Beloit reached an agreement with the International Association of Machinists Local 2018 on the closing of its Valparaiso plant.

Regal Beloit reached an agreement with the International Association of Machinists Local 2018 on the closing of its Valparaiso plant, where workers had been striking.