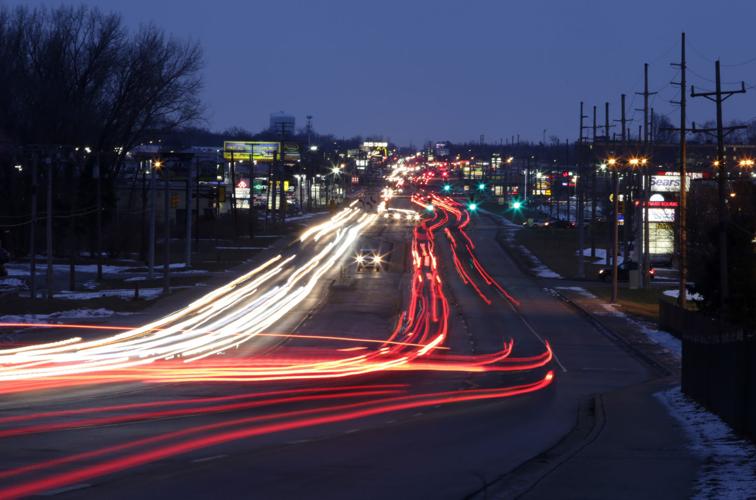 Traffic travels at night along U.S. 41 north of U.S. 30 in Schererville. Though beautiful in this photo, heavy traffic on major shopping corridors combined with poor planning in the past makes these place a nightmare for pedestrians. New lifestyle shopping centers are being designed to be more pedestrian friendly with access by bicycle or foot now possible at some. 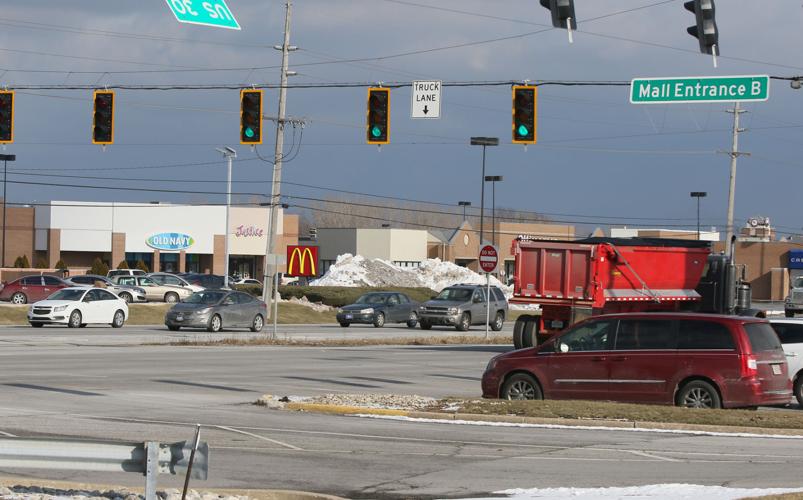 This intersection on U.S. 30 by Southlake Mall has been cited by region planners as one of the worst-devised areas for pedestrians in the entire region. They now hope better solutions can be devised for new shopping meccas coming to the region such as the planned Galleria in Crown Point. 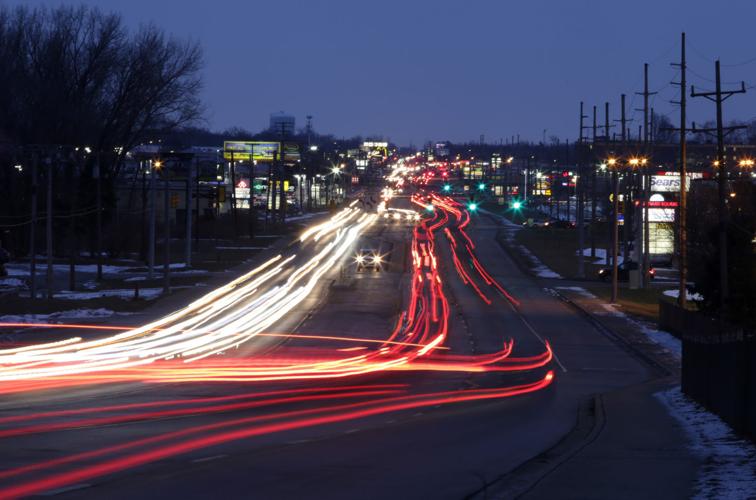 Traffic travels at night along U.S. 41 north of U.S. 30 in Schererville.

The planning problems are legion.

A shortage of north/south connections between the Interstate 80/94 (Borman Expressway) and U.S. 30. Roads that end and reappear again a mile or so later. Traffic-clogged commercial thoroughfares exacerbated by multiple curb cuts that create the potential for vehicle conflicts. The lack of sidewalks and other pedestrian amenities to reduce the need for motorized travel.

Five years ago, the Northwestern Indiana Regional Planning Commission and its 41 member municipalities came up with what they hoped was the solution when they passed their 2040 Comprehensive Regional Plan, according to NIRPC Executive Director Tyson Warner.

"We are doing our best to try to improve the way the Region grows into the future," he said.

Amended in 2015, the plan tries to address solutions for many of the Region's problems. Prepared through a grass-roots public outreach, it is a long-term vision calling for more compact development, a focus on the urban environment, an increase in transit options, connections for the trail network and preservation of natural areas.

The goal was to create a vision that everyone could use to move the Region forward together, Warner said.

"Without it, we will never get there. Everything that receives federal funding goes through NIRPC, and we take seriously the goal of aligning those investments with the plan."

NIRPC developed the Creating Livable Communities program as part of the implementation of the 2040 Comprehensive Regional Plan. That program provides grants for communities to develop plans that help to solve many of the problems that are the result of a lack of planning in the past, Warner said.

"We are conscious of the fact municipalities are in charge of their own decisions, but the more you help them understand the importance of regional collaboration and plugging into that regional vision, the more those local decisions will take that bigger picture into account," Warner said.

There is some evidence the new way of thinking is taking root.

A $100 million shopping center in Crown Point won't be built until improvements are made to 109th Avenue, which has become a car-strangled artery since the opening of the interchange at Interstate 65.

Plans for a new subdivision in St. John with 400-plus homes have been delayed at least briefly by public insistence on improvements to relieve traffic congestion on 93rd Avenue.

Warner said NIRPC will be providing more training for the people doing the planning in local communities to help them understand things like growth trends and population demographics and provide them with the expertise of the NIRPC staff in their planning.

NIRPC Transportation Planning Manager Mitch Barloga said the planning agency has had a policy for the past six years of making sure projects receiving federal funds comply with the "complete streets" policy of including things like sidewalks, bike lanes and safe pedestrian crossings.

"One of the most egregious planning errors was the U.S. 30/I-65 interchange," Barloga said. "You couldn't plan any worse of an interchange for pedestrian movement, especially in this modern age when we are supposed to be enlightened. People take their life in their hands to cross the street. Almost anywhere along U.S. 30 is horrible."

Barloga said Hobart is looking at improvements like a pedestrian bridge for the Southlake Mall area, but U.S. 41 is a similar pedestrian nightmare in addition to being a driving challenge.

U.S. 41 is the host to some of Northwest Indiana's hottest retail and commercial developments, including the $112 million Shops on Main development in Schererville and older ones like the Highland Grove Shopping Center next door.

Warner said traffic signal improvements and other changes are being brainstormed for those major corridors along with ways to fill in the web of roads, especially to provide more north/south connections between U.S. 30 and I-80/94.

"The only way to achieve our goal is with strong collaboration throughout the Region. It is happening," he said. "I've been at NIRPC three years and I get asked often how I keep 53 commissioners all moving forward. I've been pleasantly surprised at how well aligned they are, and I'm not sure that message gets communicated strongly enough.

"The perception of a balkanized region is quickly being overcome, but the public perception is not keeping up with the reality," Warner said. "If you talk to community leaders, they all would agree the region is becoming more united than it's ever been. We also have strong partnerships with the Northwest Indiana Forum and the Regional Development Authority, and all of us are closely aligned in these goals."

That cooperation is stretching across state lines. Warner said bi-state cooperation with Illinois has increased in recent years, which could enhance the potential success of things like the Calumet Heritage Corridor project, which is proposed for the area between the Dunes National Lakeshore and the Pullman Neighborhood.

"At this point we are trying to define what it is and who we need to push it forward, but it's gained quite a bit of traction lately because there has been so much acknowledgement of the region's interdependence with the Chicago area," Warner said.

He said funding is a big part of the solution to the poor planning of the past, but added, "We are trying to use the available funding the best way we can to carry out the goals of the plan. There are bumps along the way that will have to be worked through, but there is general agreement in things like the Westlake Corridor (extension of the South Shore commuter rail)."

"This region is ripe for these kinds of things to finally come together," Warner said.

PORTAGE — The heavily traveled area surrounding the intersection of U.S. 30 and Interstate 65 is an example of "broken urbanism" that regional…

SCHERERVILLE – Three new businesses will open soon in a new strip mall at the Crossroads of America, the intersection of Indianapolis Boulevar…

The women’s boutique Francesca’s has opened at Southlake Mall in Hobart.

You can hop on a train this coming weekend to learn a little more about what makes the Calumet Region so unique.

'If you build it, they will walk'

PORTAGE | Sidewalks that connect. Bike lanes on every road. Kids walking to school.

What student loan forgiveness means for you

What student loan forgiveness means for you

Traffic travels at night along U.S. 41 north of U.S. 30 in Schererville. Though beautiful in this photo, heavy traffic on major shopping corridors combined with poor planning in the past makes these place a nightmare for pedestrians. New lifestyle shopping centers are being designed to be more pedestrian friendly with access by bicycle or foot now possible at some.

This intersection on U.S. 30 by Southlake Mall has been cited by region planners as one of the worst-devised areas for pedestrians in the entire region. They now hope better solutions can be devised for new shopping meccas coming to the region such as the planned Galleria in Crown Point.

Traffic travels at night along U.S. 41 north of U.S. 30 in Schererville.