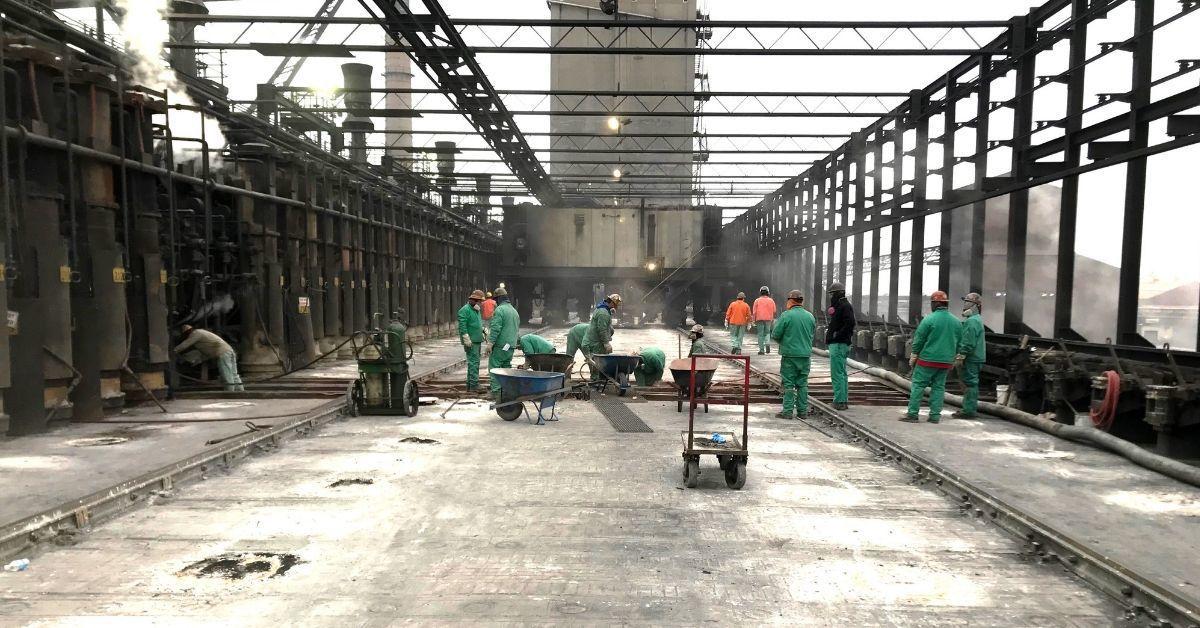 Workers repair the roof of the No. 2 coke battery at ArcelorMittal Burns Harbor in Porter County recently. They are among the more than 395,000 people currently employed in Northwest Indiana. 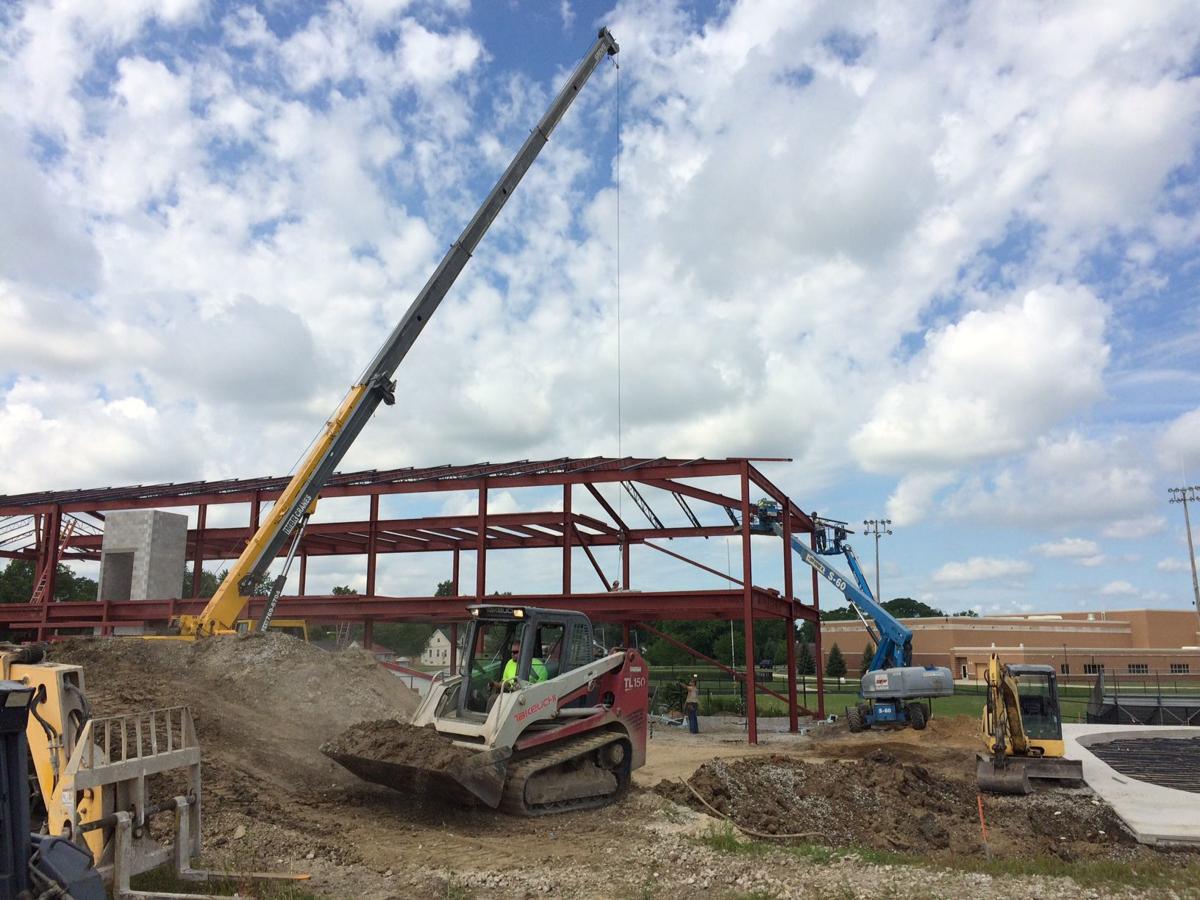 Look at all the towering blast furnaces, the soaring flare stacks, the rumbling rail cars, and the semi-trailer trucks hauling steel coils that weigh more than a car.

The Region was built on hard work.

Northwest Indiana has long been home to steelworkers, oil workers, auto workers and other tough factory workers who aren't averse to breaking a sweat and who shower after work, not before. In the Region, people put in a long day's work — including during graveyard shifts because the blast furnaces that burn along the lakefront cannot just be switched off, and some assembly lines run around the clock to keep up with demand. It's a place where people don hard hats and work boots, and can point to what they did at the end of a shift.

In July, Northwest Indiana's workforce consisted of an estimated 414,325 people, including 395,414 people who were employed and 18,911 people who were actively seeking work, according to the Valparaiso-based Center for Workforce Innovations. The Region's workforce grew by 1,657 people as compared to June.

Employment stood at 4.6% in the Gary metropolitan area, down significantly from a high of around 12% during the Great Recession a decade ago.

"The availability of jobs and pay has continued to improve in Northwest Indiana," Indiana University Northwest Assistant Professor of Economics Micah Pollak said. "In 2018, there were 288,988 workers employed in Lake, LaPorte and Porter counties, the highest level of employment in almost a decade. In 2018, the unemployment rate also declined to 4.6%, the lowest rate since the year 2000. Average annual wages for the Region also increased to $46,450 per year in 2018, up 3.5% from 2017 compared with 2.8% and 0.5% growth during the previous two years."

The highly industrial Region had been suffering from a shrinking workforce in recent years. Northwest Indiana has lost nearly 3% of its population over the past decade along with the greater Chicago metropolitan area amid a nationwide population shift from the Midwest to the coasts, the Sun Belt, and southern states with more sunshine and better weather.

But things have finally started moving back in the right direction, Pollak said.

"For the first time in almost a decade, Northwest Indiana has started to reverse the outflow of our population, a sign of a strengthening labor force," he said. "Since 2010, the three-county region of Lake, LaPorte and Porter has lost a net of 24,000 people due to domestic migration, with 2,000 to 5,000 more people moving out than into the region each year. However, in 2018, we had slightly positive net domestic migration, gaining 88 more people than we lost. This positive net migration helped contribute to an increase in population during 2018, the largest since 2010."

The workforce has been adjusting to a changing world, said Linda Woloshansky, president and CEO of Center of Workforce Innovations.

"The workforce in Northwest Indiana continues to evolve and the workers are resilient as they seek out places to work that keep them employed," Woloshansky said. "Workers are taking into account the need for boosting their skills and this is evidenced by early indications of increased enrollment at our community colleges and other post-secondary institutions and training providers. Many continue to take on two part-time jobs in order to provide for their family."

But good-paying jobs remain available for those with the skills to land them, Woloshansky said.

"As businesses and many industries struggle with finding the right workers, we are seeing Region employers finding value and focusing on retraining and upskilling their current workforce for retention and advancement," she said. "Many jobs are being created that require education and training beyond high school that don’t specifically require a four-year degree, but rather a combination of skill certifications and work experiences. In addition, and as a result of the new high school graduation pathways, region employers will be able to work directly with high schools in providing options for students to launch successful careers with their companies through work-based learning opportunities."

"We are facing a silver tsunami with a wave of retirees," she said. "But we have great programs at the high school level through the university level to train skilled workers. We have a very talented workforce and need to grow those skills for the next generation of manufacturing and innovations, like the internet of things. The workers of the future will need to adapt quickly. But in Northwest Indiana, our workers have long been strong and resilient. We have great folks who have made things work for generations."

Today's workers need to be lifelong learners to keep up with advancements in technology and evolving workplaces, Ennis said. Her Portage-based, privately funded economic development agency is working to diversify the Northwest Indiana economy by bringing in more firms in the agricultural value chain, heavy industry, tourism, intermodal and business services sectors, a top priority in the Ignite the Region plan.

It's also working to promote Northwest Indiana and develop more amenities that will attract more human talent to the area, to meet the needs of employers.

"There's a great feeling we have about the Region," she said. "Our labor force has the dedication to get up and go to work every day. Our workforce is determined, hardworking, tough, strong and impressive. That's critically important because that's what companies are looking for."

MICHIGAN CITY — A longtime manufacturer in Michigan City is undertaking a close to $30 million expansion.

Indiana's unemployment rate dropped for the second straight month, falling to 3.4% in July.

Unemployment shot up in most of Northwest Indiana in July, rising for the second straight month and increasing by as much as a 0.9 percentage …

Unemployment rose across most of Northwest Indiana in June, rising by as much as 1.3% in East Chicago.

Indiana's unemployment rate dropped to 3.5% in June after being stuck at 3.6% for three straight months.

Northwest Indiana's unemployment rate fell to 3.8% in May, hitting its lowest point since May 2017 after dropping by half a percent, but the l…

Indiana unemployment claims fall to yearly low in May

The number of unemployment claims in Indiana hit a new low for 2019 in May, as seasonal hiring started to pick up.

BLOOMINGTON, Ind. — Indiana University says its overall enrollment has dropped slightly at its seven campuses around the state.

A new president has been named at Gary-based Chemcoaters, which bills itself as "leader in steel surfacing products and services."

You can get in some retail therapy while shopping for locally made artisan goods and sipping craft beer this weekend in Michigan City.

After surging in July, steel import permit applications in the United States plummeted by 40.8% year over year to 2.1 million tons in August.

International shipping down 3.5% on the Great Lakes

International shipments through the St. Lawrence Seaway to Great Lakes ports like the Port of Indiana-Burns Harbor have fallen by 3.5% so far …

Unemployment falls to lowest level since Feb. 2018 in Indiana, lowest ever in Illinois

Unemployment fell to 3.3% in Indiana and 4% in Illinois in August.

Acclaimed essayist Hanif Abdurraqib, the author of "They Can’t Kill Us Until They Kill Us," will appear at Indiana University Northwest in Gar…

Unemployment dropped across Northwest Indiana in August, falling by as much as 0.7% in East Chicago, Gary and Merrillville.

Steel imports plunge by 34% in August

Steel imports plummeted by 34% in August, according to preliminary U.S. Census Bureau data.

Median income in Indiana ticked up slightly last year by $522 to $55,746 a year, an increase of less than 1%, according to recently released U…

NIPSCO is forecasting lower heating bills this winter as compared to last year.

NIPSCO is looking to make what once industry observer described as potentially one of the biggest solar energy procurements "in America, if no…

Steel demand expected to grow only slightly next year

Steel demand is expected to grow only slightly next year, both worldwide and in North America.

Unemployment dropped across Northwest Indiana in September, falling by as much as 0.6 of a percentage point in Gary.

Learn about how NIPSCO is going green at an upcoming Lakeshore Chamber of Commerce luncheon in Hammond.

Heavily industrialized Northwest Indiana may remain a relatively dangerous place to work, with injuries at steel mills and fatalities includin…

Year in Review: Mixed picture for heavy industry in 2019 despite more than $2 billion in investment

Indiana's unemployment rate stayed steady at 3.2% in October, remaining at its lowest point since December 2000.

Unemployment rate falls slightly across most of Northwest Indiana

Unemployment dropped across most — but not all — of Northwest Indiana in October, dipping slightly as compared to the previous month.

Sullair in Michigan City won the prestigious Hitachi Inspiration of the Year Global Award for its Compressed Air Academy, which aims to train students to work in the industry.

The Center of Workforce Innovations President and CEO Linda Woloshansky is retiring after 20 years at the helm of the Valparaiso-based organization.

In wake of coronavirus pandemic, state of workforce in NWI is 'not great'

More than one out of every five Northwest Indiana residents lost their jobs during the coronavirus pandemic.

Sullair names second CEO in a year after a promotion

One of Michigan City's largest industrial employers has named its second CEO in a year after current Sullair President and CEO Charlie Takeuchi was promoted by parent company Hitachi.

Sullair, a Michigan City-based manufacturer of air compressors since 1965, started a Compressed Air Academy at Michigan City High School to ensure a pipeline of qualified workers in the future.

Workers repair the roof of the No. 2 coke battery at ArcelorMittal Burns Harbor in Porter County recently. They are among the more than 395,000 people currently employed in Northwest Indiana.