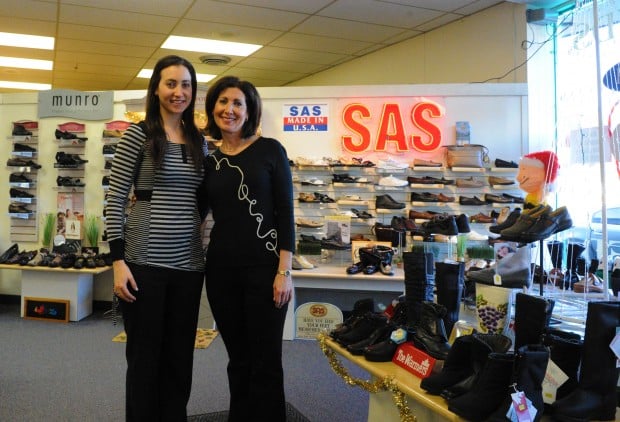 Natasha Dobrin, left, stands with her mother, Beverly Sandler, in Sandler's Shoes. Founded by a Holocaust survivor, the Lansing business celebrates its 50th anniversary this year. 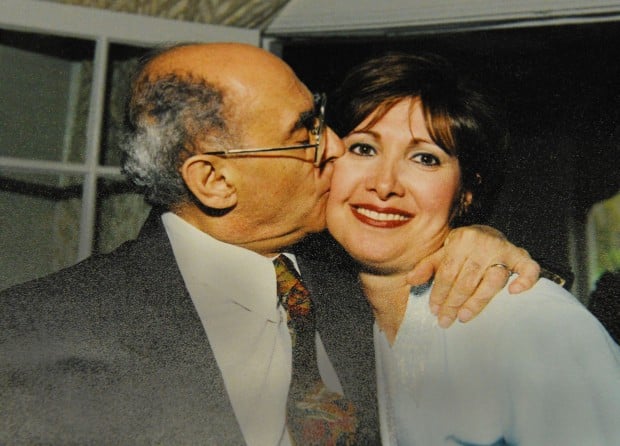 Founded by a Holocaust survivor, Sandler's Shoes celebrates its 50th anniversary this year.

Abraham Sandler grew up in a Lithuanian town that was liquidated by the Nazis in World War II. Nearly all of Sandler's family was killed and many young men were rounded up in the middle of town and shot down, including his brother. Others, like Sandler, were threatened with same outcome if they didn't obey the rules. Jewish families were placed in ghettos, which were forced labor camps. They were forced to do hard labor and were given rationed food. If they weren't able–bodied, they were sent to concentration camps.

After the war Sandler was waiting for a transport to Palestine when he discovered his father was still alive. They were both in separate refugee camps in Italy. After being reunited, Sandler's father insisted on going to New York where his sister lived.

Sandler began working the minute he arrived. He was a busboy before moving with his father to Ohio to work in a paint factory owned by distant cousins. After discovering an allergic reaction to paint, Sandler began to sell shoes.

And he loved it.

"He was magical when it came to working with customers," Beverly Sandler said. Sandler eventually met his wife, who was from Chicago and encouraged him to start a business there.

In February 1962, despite having little money, Sandler rented a tiny storefront in downtown Hammond. Sandler's Shoes debuted with $400 worth of inventory.

"It was truly a brick–by–brick process," Beverly Sandler said.

Sandler began specializing in extra–wide widths of shoes because a lot of his customers worked in the mills and were in need of them.

"At that time you didn't have Walmart and these other stores carrying wide sizes," Beverly Sandler said. "He brought in work boots in wide sizes and bent over backward to fit these people. And if he didn't have it on hand he would find it for them. He always believed in fitting people properly.

"He developed very loyal customers and built a business in the process. And he passed it on to me."

Beverly Sandler grew up in the store, dusting shoes when she was only 6. She took over at the young age of 19 and has been running it since.

"I was fascinated in being there," she said. "I got to listen to all his stories from the war. The store was symbolic of a new life he started for his family."

Sandler's Shoes moved from Hammond to its current downtown Lansing location in 1997. Abraham Sandler passed away in 2005.

"I feel really grateful to be a part of this business," Beverly Sandler said. "I feel there is a place for this business in this community. Customers have been coming here for 50 years."

What sets the business apart from other shoe stores is the care that goes into what people wear, Beverly Sandler said. A lot of people spend all day on their feet with shoes that don't fit properly.

"You can't fool the feet," she said. "People aren't getting their feet measured. They're spending good money on the wrong shoes – buying them on the Internet or the big box stores that have no expertise."

Beverly Sandler said that could lead to foot problems and a trip to the doctor.

"Most of that is completely preventable with the right foot wear," she said. "Stores don't take into account what the industry used to be with the old–time shoe fitters."

Beverly Sandler's daughter, Natasha Dobrin, 25, is currently helping out in the store.

"I really feel grateful to be a part of the business," she said. "I feel there is a place for this business in the community."

*Editor's Note: This story has been corrected from an earlier version. A previous version of this article had incorrect information as to store hours. The correct hours for Sandler's Shoes, 3313 Ridge Road, Lansing, are 9:30 a.m. to 6 p.m. Mondays through Wednesdays; 9:30 a.m. to 8 p.m. Thursdays and Fridays; 9 a.m. to 5 p.m. Saturdays; and closed on Sundays. The Times regrets the errors.

U.S. Steel to blow up long-abandoned stacks at Gary Works

Baseball Card Exchange in Schererville authenticated the case as being real and untampered with but then internet sleuths and Pokémon card experts started to question the authenticity online.

A longtime worker's compensation attorney, whose clients included the city of Hammond, is being mourned is what's being described as a "big loss for the legal community."

Old World Market has brought world to Valparaiso for decades

"This is extra money we've taken from the taxpayers. So our job is to give it back if we don't need it," said state Rep. Tim Brown, R-Crawfordsville, the sponsor of the measure.

Morgan Li is investing $2 million in upgrades and may add as many as 40 jobs there by year's end.

U.S. steel mills shipped 7.89 million tons of steel in November, the most recent month for which data is available, according to Washington D.C.-based trade association the American Iron and Steel Institute.

Indiana-American Water, a privately owned utility that supplies water to many communities in Northwest Indiana, is offering grants for watershed protection and other environmental projects.

Natasha Dobrin, left, stands with her mother, Beverly Sandler, in Sandler's Shoes. Founded by a Holocaust survivor, the Lansing business celebrates its 50th anniversary this year.