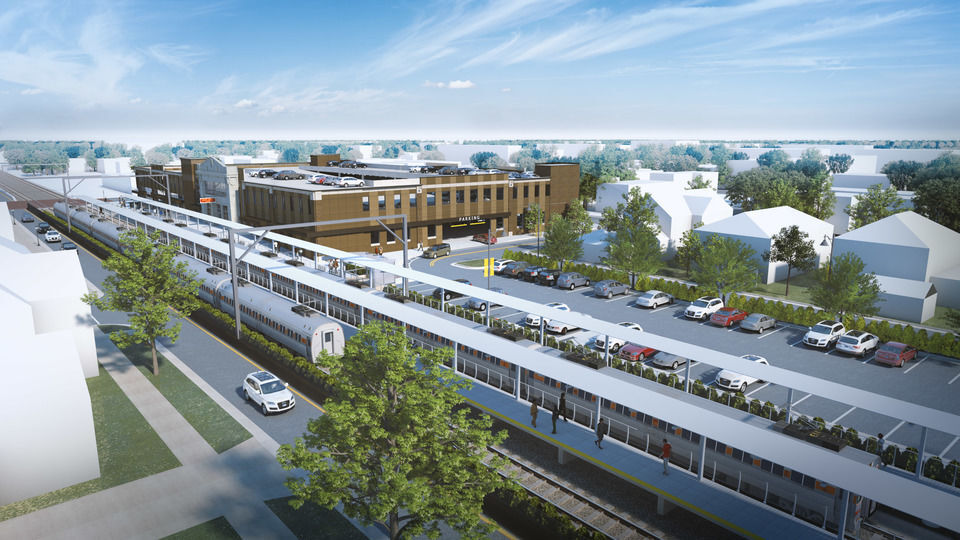 An artist's rendering shows the possible design of a new South Shore Line station and parking garage at 11th Street in Michigan City. 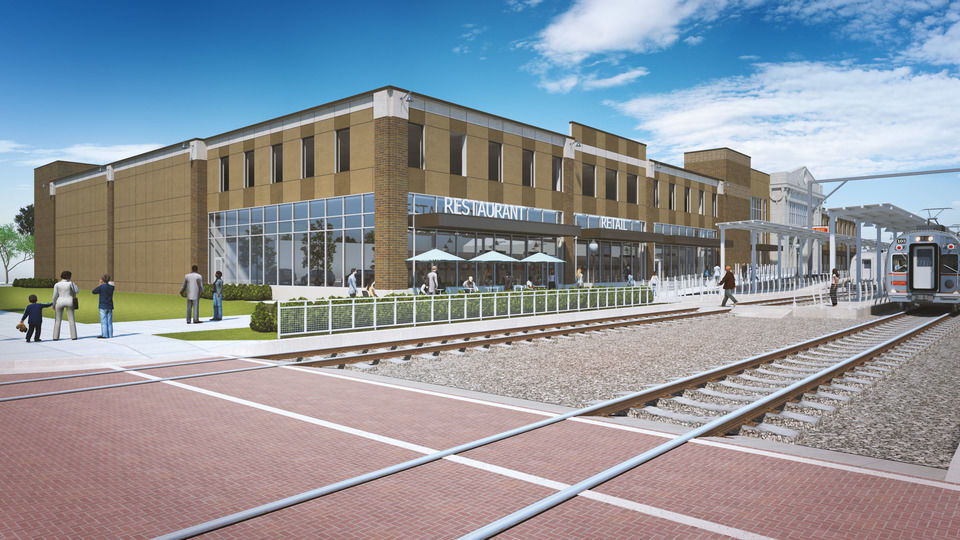 An artist's rendering presents an idea for development at a new 11th Street South Shore station in Michigan City. 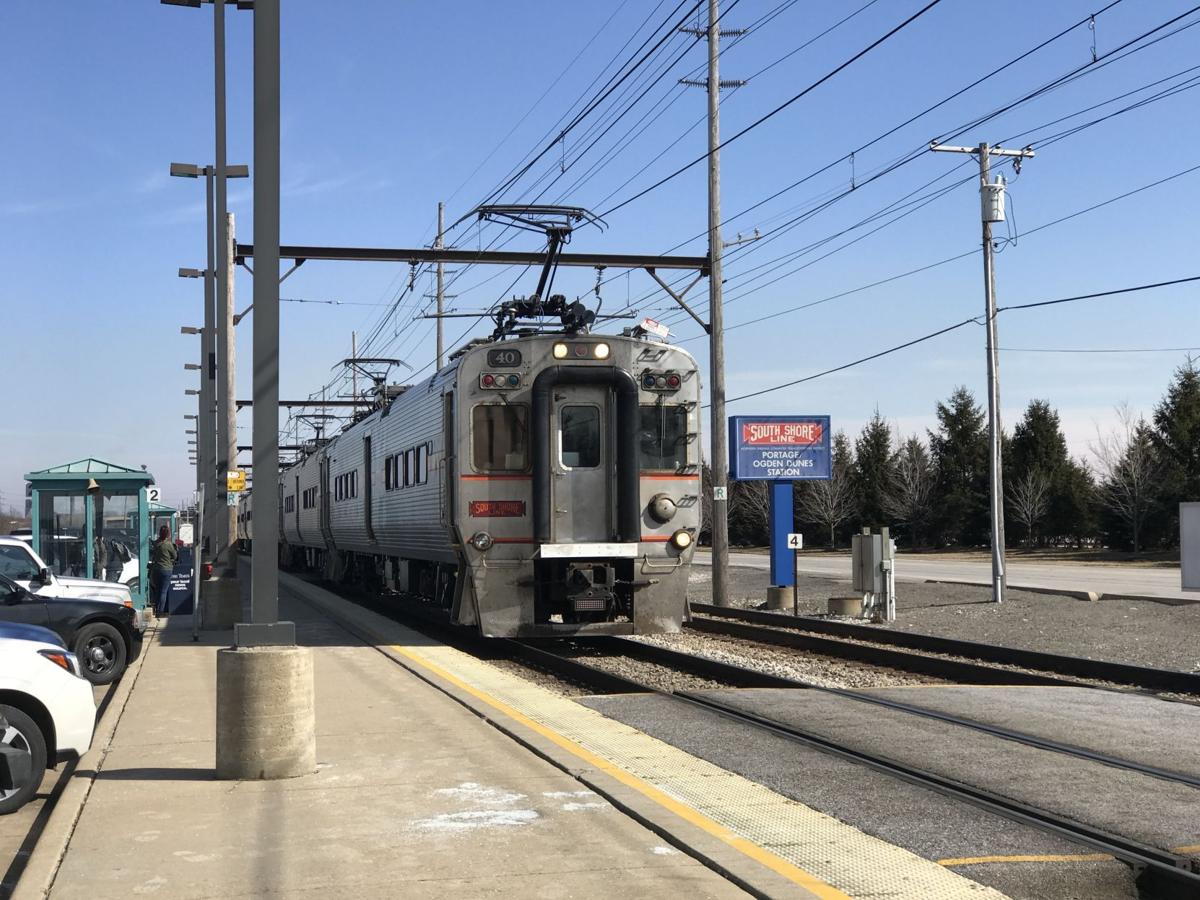 A South Shore train arrives in Portage. The station, and others along the route, will see significant upgrades as part of the Double Track Northwest Indiana project.

The federal New Starts grant will help fund a project that will add a second set of tracks along approximately 17 miles of single-track railroad between Gary and Michigan City, and include bridge replacements and station upgrades along the route.

Completion of a full-funding grant agreement for the grant was announced by Gov. Eric Holcomb's office, as well as the FTA and NICTD.

“By improving commuter rail through the Region, the project is a game changer for northwest Indiana and the entire state,” Holcomb said.

The agreement comes less than three months after a similar agreement for federal funding for the Northern Indiana Commuter Transportation District's West Lake Corridor project, which will extend commuter rail from Hammond south to Dyer.

“Combined with our recent announcement on the West Lake Corridor project, double tracking the South Shore line will connect Hoosiers, attract talent and business, and increase quality of life in our great Indiana communities,” Holcomb said.

The Double Track project, which spans 26 miles from Gary to Michigan City, includes expansion of parking lots for over 1,300 new parking spaces and construction of nine new station platforms, in addition to the rail and bridge improvements. Michigan City will see significant change, with the new rail line separated from the roadway and the closing of 21 at-grade crossings.

Secretary of Transportation Elaine Chao, in one of her last acts leading the U.S. Department of Transportation, said the project would provide better access to "jobs, education and essential services." Chao on Thursday announced her resignation, effective Monday, in response to the previous day's events at the U.S. Capitol, saying she "cannot set aside" the pro-Trump insurrection, which she said was preventable.

Double Track and the West Lake Corridor projects together are projected to attract approximately $2.3 billion in private investment to Northwest Indiana, and result in over 6,000 new jobs and $3 billion in economic impact by 2048. Construction is planned to begin this year and be completed in 2024.

“Reduced travel time and more frequent service options have been top priorities for those who rely on South Shore Line service," NICTD President Michael Noland said. "They, along with important safety enhancements, are vital to the long-term success of commuter rail operations from South Bend to Chicago. Today’s award of a full-funding grant agreement from the Federal Transit Administration, clearly establishes that our partners at the FTA fully share in our region’s priorities and economic future."

RDA President and CEO Bill Hanna called Double Track and West Lake together “the largest and most comprehensive economic development project in Indiana."

Noland and Hanna thanked state and federal elected officials for their support of the project.

"This is the kind of success, positive momentum and strong leadership that creates confidence in our market," Hanna said. "This is also a clear recognition of the value of Indiana’s gateway to Chicago and its future.”

“This has been a game-changing infrastructure priority for Indiana for many years, so naturally I am thrilled that our efforts have helped secure the full amount of federal funding required to complete the South Shore Line Double Track project," U.S. Sen. Todd Young said. He recalled his 2017 invitation to incoming Department of Transportation Secretary Chao to visit Indiana to discuss the project, which culminated in a meeting at South Bend International Airport.

"Now, with its expected economic impact of $3 billion by 2048 and the creation of more than 6,000 new jobs, the completion of this and other Northwest Indiana infrastructure projects will benefit Hoosiers for years to come. I applaud everyone at the state and federal level who played a role in helping us reach this pivotal moment,” Young said.

“The South Shore Double Track Northwest Indiana project is a win for Indiana and a big step forward for our public transportation system in the northwestern region, and I’m proud I could play a role in securing federal funds from the Federal Transit Administration needed to complete this important economic development project," U.S. Sen. Mike Braun said. "Thanks to bipartisan work from every level of government by Gov. Holcomb, Sen. Young, Rep. (Jackie) Walorski, now-retired Rep. (Pete) Visclosky and our state legislators and local leaders in our northwestern counties, the South Shore Double Track project will bring new investment, jobs and growth to the region."

“The full-funding grant agreement brings this vital project another step closer to reality. I’m thrilled to join my Hoosier colleagues, Gov. Eric Holcomb, and other local, state, and federal officials in marking this momentous occasion. Our region’s economic future depends on innovative solutions like this, and I look forward to continuing our work together to strengthen northern Indiana."

The South Shore projects were initially spurred by Visclosky, who retired at the end of 2020 and was succeeded by U.S. Rep. Frank Mrvan.

“I congratulate all of the individuals and entities involved with this project for their steadfast dedication to investing in the positive economic future of our region," Visclosky said. "Specifically, I want to thank Gov. Holcomb, Sens. Young and Braun, our state legislators, local leaders, and everyone at the RDA and NICTD for their perseverance to make this investment a reality."

Visclosky urged officials to "use this opportunity, coupled with the West Lake expansion of the South Shore, to urgently seek out the next transformational investments for our region. We must move quickly and decisively to maximize these investments to create good-paying jobs and enhance our quality of place. We must also ensure they inure to the benefit of every citizen of Northwest Indiana."

“Today's announcement highlights what Gov. Holcomb and all of our dedicated leaders can accomplish on behalf of our region when we work together," Mrvan said. "This significant investment in our transportation infrastructure will create new good-paying jobs and positive, collective economic impact throughout our entire region. Let us continue to look for opportunities to create partnerships between federal, state and local government entities and stakeholders to build an economy that works for everyone."

WSP will be paid nearly $17.1 million, according to a contract approved Monday.

Percy Daniels, who just retired from the Gary Public Transportation Corp. after more than 50 years, died after a short struggle with his health.

Steel imports fell 21.2% in 2020, with finished imports grabbing about 18% of the market share in the United States.

As Congressman Pete Visclosky often did before him, Congressman Frank Mrvan appeared before the International Trade Commission to testify on behalf of local steel mills against the import of seamless line and pressure pipe steel products.

Congressman Frank Mrvan again testified before the International Trade Commission against imports of mattresses that hurt the domestic steel industry.

The U.S. Department of Transportation announced Monday that NICTD would receive about $24.6 million for the Double Track project, and just under $44 million for the West Lake project.

Masks still are required on the South Shore Line regardless of coronavirus vaccination status.

Since 2017, the Midwest Rail Rangers have been giving free public talks about Chicago trivia, the Region's steel mills, the scenic Indiana Dunes and the agriculture in LaPorte and St. Joseph counties.

An artist's rendering shows the possible design of a new South Shore Line station and parking garage at 11th Street in Michigan City.

An artist's rendering presents an idea for development at a new 11th Street South Shore station in Michigan City.

A South Shore train arrives in Portage. The station, and others along the route, will see significant upgrades as part of the Double Track Northwest Indiana project.