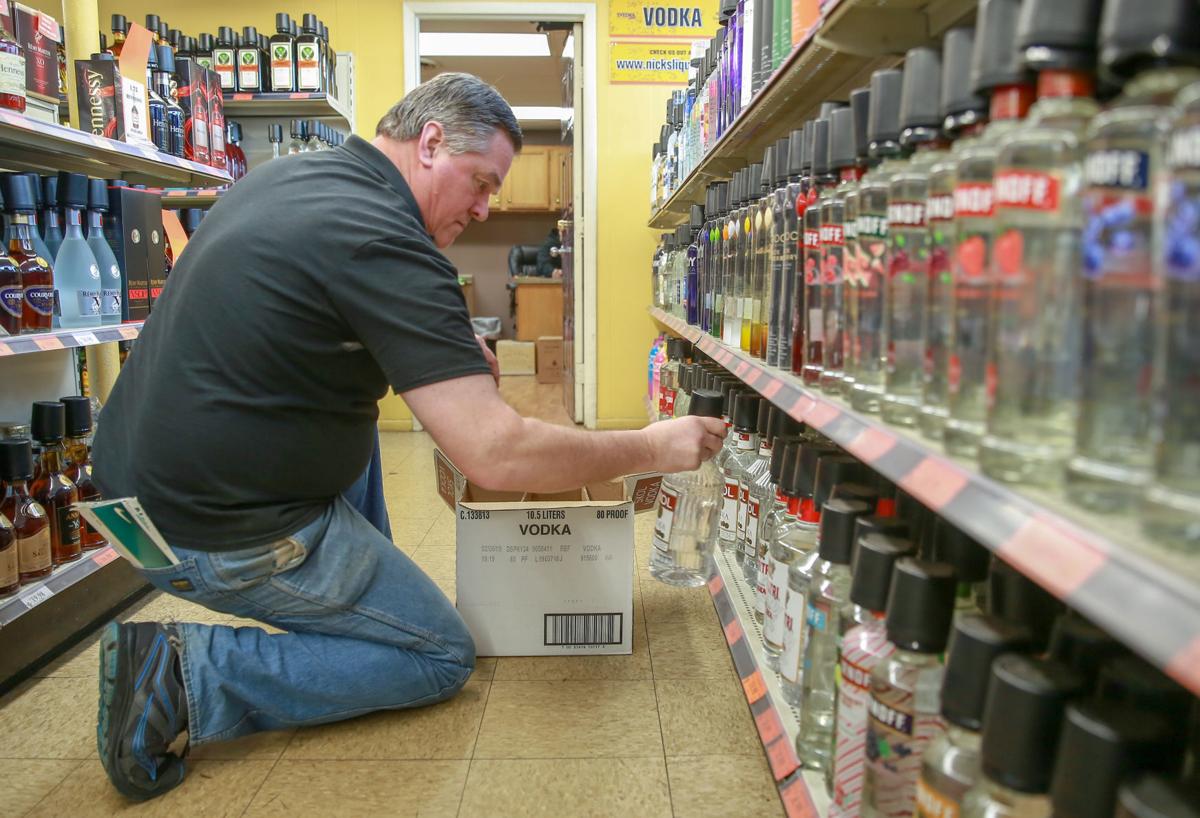 Frankie Cox stocks Skol Vodka at Nick's Liquors in Hammond. The store has remained closed on Sundays, one year after the state legalized sales on that day. 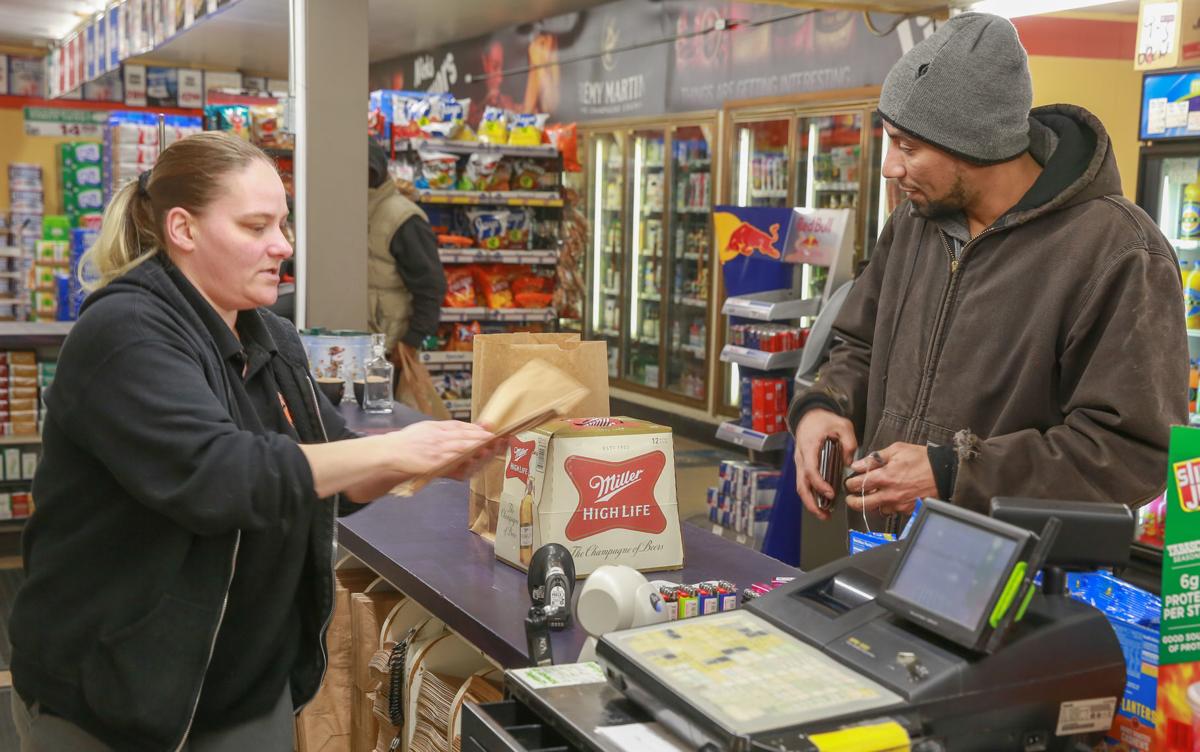 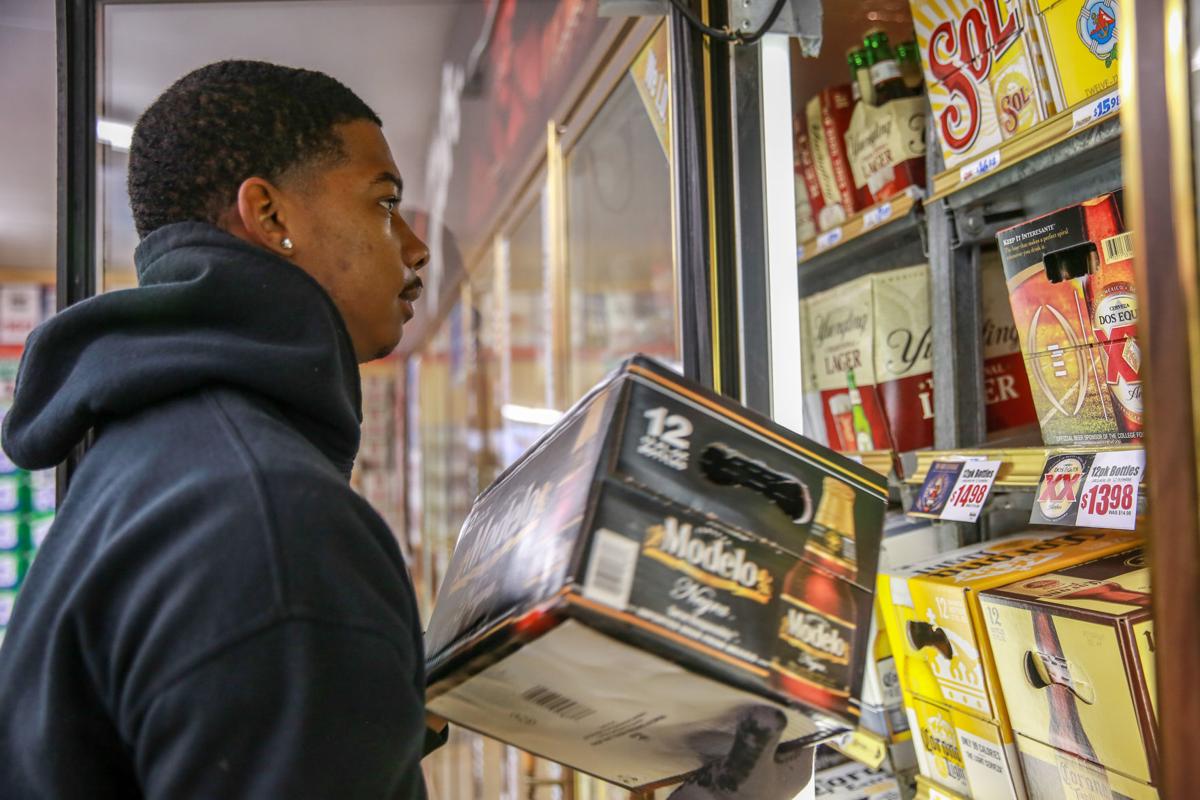 Jonathan Crawford stocks the cooler at Nick's Liquors in Hammond. The store has remained closed on Sundays, one year after the state legalized sales on that day. 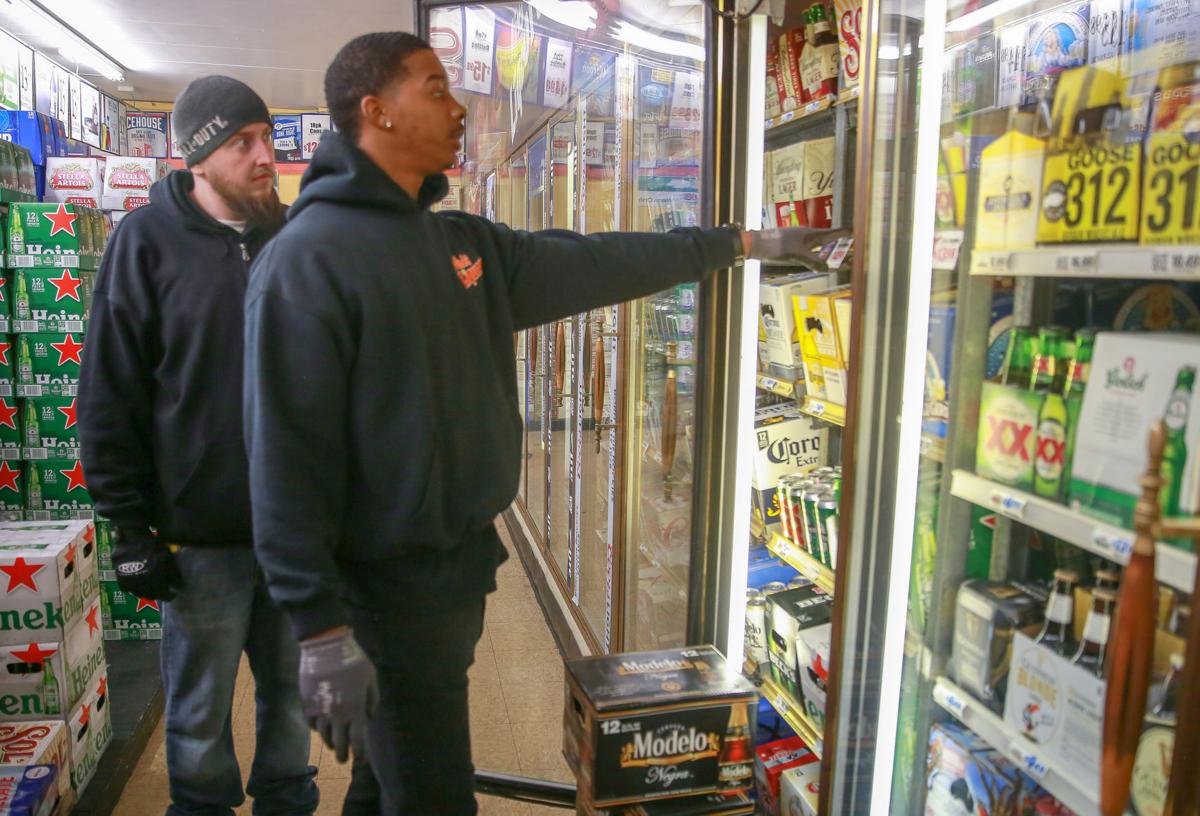 Ryan Anderson, left, and Jonathan Crawford stock the cooler at Nick's Liquors in Hammond. The store has remained closed on Sundays, one year after the state legalized sales on that day.

Hoosiers marked the historic legalization of Sunday alcohol sales in Indiana on March 4 last year by buying six-packs of beer or bottles of wine, and posting selfies with the receipts on social media.

Many local liquor stores celebrated Indiana becoming the last state in the union to scrap a 19th-century blue law prohibiting the sale of booze on the Sabbath with cookouts and other festivities. The Liquor Bucket at 409 W. 80th Place in Merrillville grilled hot dogs and burgers in the parking lot, sparking a dumpster fire when someone accidentally tossed still-burning embers.

But Sunday sales have gone much more smoothly since then at Liquor Bucket.

"It's helping business, especially during football season," manager Raul Santos said. "We'll have a dozen cars waiting in the parking lot on noon on football Sundays. Super Bowl Sunday was crazy right up until kickoff. Without going into too much detail, we're making over $5,000 on Sundays, so it pays for the extra overhead."

Some Northwest Indiana retailers said they've seen a boost in business since Sunday sales started a year ago. Others reported that they haven't seen much overall lift in alcohol sales, and some liquor stores remain closed on Sundays, with no plans to open anytime soon.

While Illinois' ongoing population decline may have contributed to the drop in liquor tax revenue last year, Northwest Indiana residents had been notorious for crossing the state line to border communities like Lansing, Lynwood, Sauk Village, Chicago, and Calumet City to buy booze on Sundays.

"I certainly spend much less money at Santori's on Sundays," Griffith resident Gabriel Mauch said, referring to the liquor store in Lansing whose parking lot was often filled with Indiana plates on Sunday.

Liquor Bucket customers have been thrilled they don't have to drive to Illinois or Michigan to buy alcohol, but sometimes get upset that the store has to close by 8 p.m. under state law, which restricts sales to noon to 8 p.m. on Sundays, Santos said.

"People get mad and don't know why it's not like any other day," he said. "But overall, it's just generally good for business."

"The only impact that we have been experiencing is that we no longer have customer complaints for not being able to sell alcoholic beverages on Sunday," Olympidis said. "We still experience some friction because of the limited selling hours on Sunday, which makes absolutely no sense to consumers. It would be desirable if the Indiana Legislature fixes this remaining anomaly."

Olympidis said it was too early to gauge the overall impact on business, but it was beneficial to have another day of sales.

"People like the idea of not having to go to Illinois," employee Chris Osler said. "It's only eight hours, but it's really good for eight hours. It's great during the summer because everybody wants to go to the beach and they don't have time to drive over to Illinois."

Limousine chauffeur Robert Pastore said he often used to have to dash across the state line to get his clients champagne and beer before the law changed.

"One memorable Sunday afternoon wedding in Schererville, the groom had me drive to a liquor store 10 minutes away in Sauk Village, Illinois, to replenish his refreshments for his wedding guests," he said.

The only other option for buying alcohol to consume at home on a Sunday before the law changed a year ago was to visit craft breweries, which could sell beer brewed on-site to go.

"Before the legalization, I used to stop into the local breweries to get growlers filled," Merrillville resident Adam Hazlett said. "Crown Brewing even did a discount on growler refills on Sundays. Now I just grab whatever I need from the store."

But many Region craft breweries also bottle and distribute beer to local retailers.

"Sunday sales seem to have changed our business for the better," New Oberpfalz Brewing owner Dan Lehnerer said. "Because we are only distributed to stores in Northwest Indiana, our customers essentially have 15 percent more time to sell our products every week, so allowing them to be open on Sundays has contributed to our overall growth."

Lehnerer said it was difficult to say how much of the growth could be attributed to Sunday sales, but that business was good and growler sales on Sunday had not been impacted. New Oberpfalz's grocery and liquor store customers also seemed to be agreeable to the change in the law.

"I believe Indiana residents and visitors appreciate the fact that they don’t have to make special plans to grab some beer or a bottle of wine on the way to Sunday dinner somewhere, or have to run to Cal City during halftime because their football party is better attended than they thought," he said. "I look forward to Indiana liquor laws continuing to evolve in response to the modern world, opposed to early in the last century, when many of the state’s dram laws were initially ratified by legislators. And I don’t think anyone in Indiana is upset about sales tax and excise tax dollars not going to Illinois, Michigan, Ohio and Kentucky every Sunday."

"I moved to Indiana from Illinois about 20 years ago and I never got used to it," he said. "I could never understand how you could go to a bar on Sunday get drunk and drive home but you couldn't buy beer at a store and take it home to drink."

Mostly a redistribution of sales

An extra day of alcohol sales does not appear to have caused any significant increase in drinking in Indiana.

Jeff Strack, president and CEO of the Strack & Van Til chain of supermarkets, said Sunday sales have had a marginal impact on overall beer and wine sales after a year.

"It’s been mostly a redistribution of sales from other days of the week," he said.

Nick's Liquors, one of the largest liquor store chains in Northwest Indiana with eight locations, remains closed on Sundays.

"We have chosen to stay closed mostly of the belief that we should give our employees a day off," general manager Nick Kikalos said. "If you're a churchgoer or Christian, it gives you the Sabbath."

Nick's customers have been used to buying liquor on the other six days of the week.

"People are creatures of habit," Kikalos said. "Since Prohibition, no one in Indiana had been allowed to sell alcohol and people are used to stocking up on Saturday."

Kikalos said it could drive more business to the grocery stores because Sunday is the biggest shopping day of the week but said liquor stores have a big advantage because supermarkets can't sell cold beer in Indiana and people don't like to wait hours for their beer to get cold.

For the time being, Nick's Liquors sees no business necessity for opening on Sunday.

"Business was very much alive and doing good in 2018," Kikalos said. "We've always said if the day comes when we need to open on Sundays, we'll talk about it. But as of right now, we like to let our employees spend time with their families. It's too early to tell what kind of impact it's having, and our business continues to climb even though we're closed on Sundays."

Thornton Quarry, one of the largest aggregate quarries in the world and the "Midwest's Grand Canyon," rocks, according to its peers in the industry.

Crown Point's Hot Dog Guy to retire, but new owners swoop in to save food carts

Strack & Van Til, the Region's largest grocery chain, has seen a substantial increase of more than 50 percent in online shopping over the …

Valparaiso's Four Fathers Brewing is on a roll.

Some liquor stores remain closed on Sundays. 'Too soon to tell' overall impact of sales on the Sabbath

When Indiana legalized Sunday alcohol sales for the first time in its history on March 4, Hoosiers celebrated with barbecues outside liquor st…

Vierk's Liquor Store on Ridge Road in Lansing, less than a half-mile from the state line, can get so packed on Sundays that people often have …

The That's So Region panel discusses the story of the stolen $700 napkin dispenser at a Schererville White Castle (1:12), the Griffith student…

Family Express CEO and founder Gus Olympidis was honored for his distinguished 44-year career in the convenience store business.

Frankie Cox stocks Skol Vodka at Nick's Liquors in Hammond. The store has remained closed on Sundays, one year after the state legalized sales on that day.

Jonathan Crawford stocks the cooler at Nick's Liquors in Hammond. The store has remained closed on Sundays, one year after the state legalized sales on that day.

Ryan Anderson, left, and Jonathan Crawford stock the cooler at Nick's Liquors in Hammond. The store has remained closed on Sundays, one year after the state legalized sales on that day.