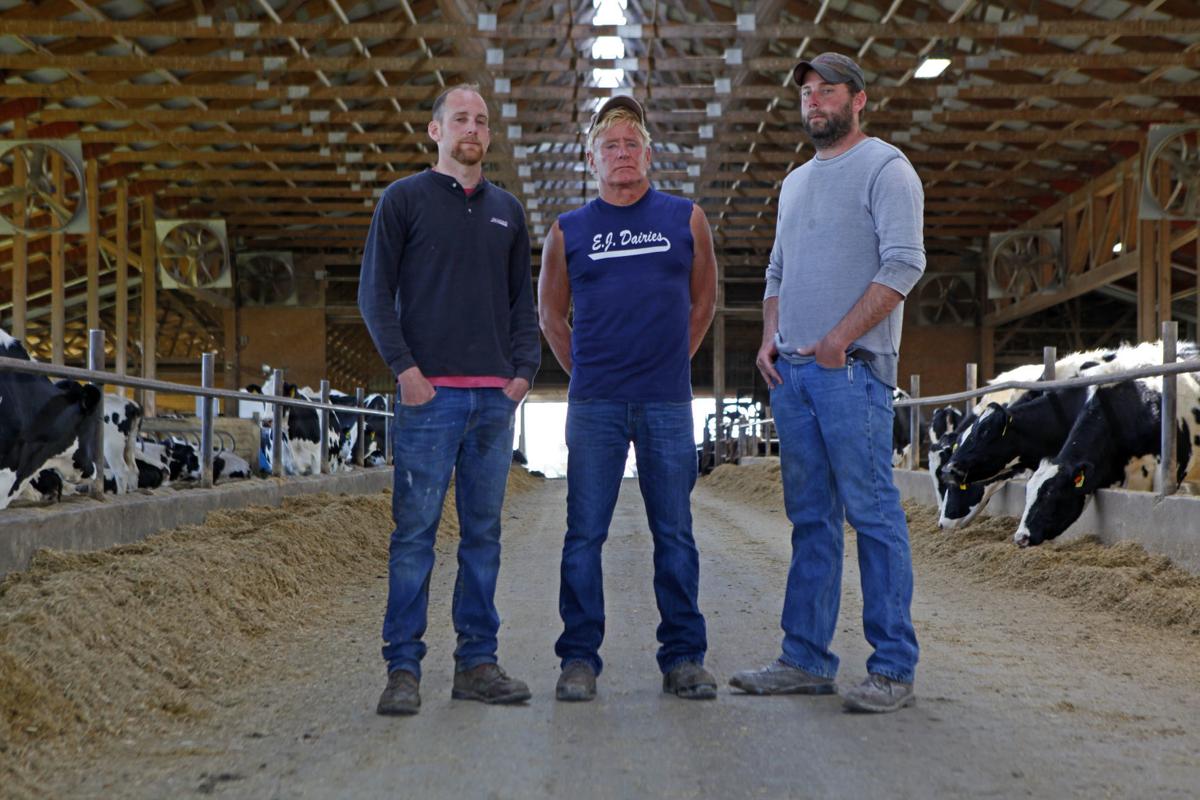 EJ Hein, center, poses for a photo with his sons, Stephen, left, and Mike at EJ Dairies in Center Township. Trade disputes have damaged business at the Hein family's farm, which includes 5,000 acres of crops and a 1,000-acre dairy farm. 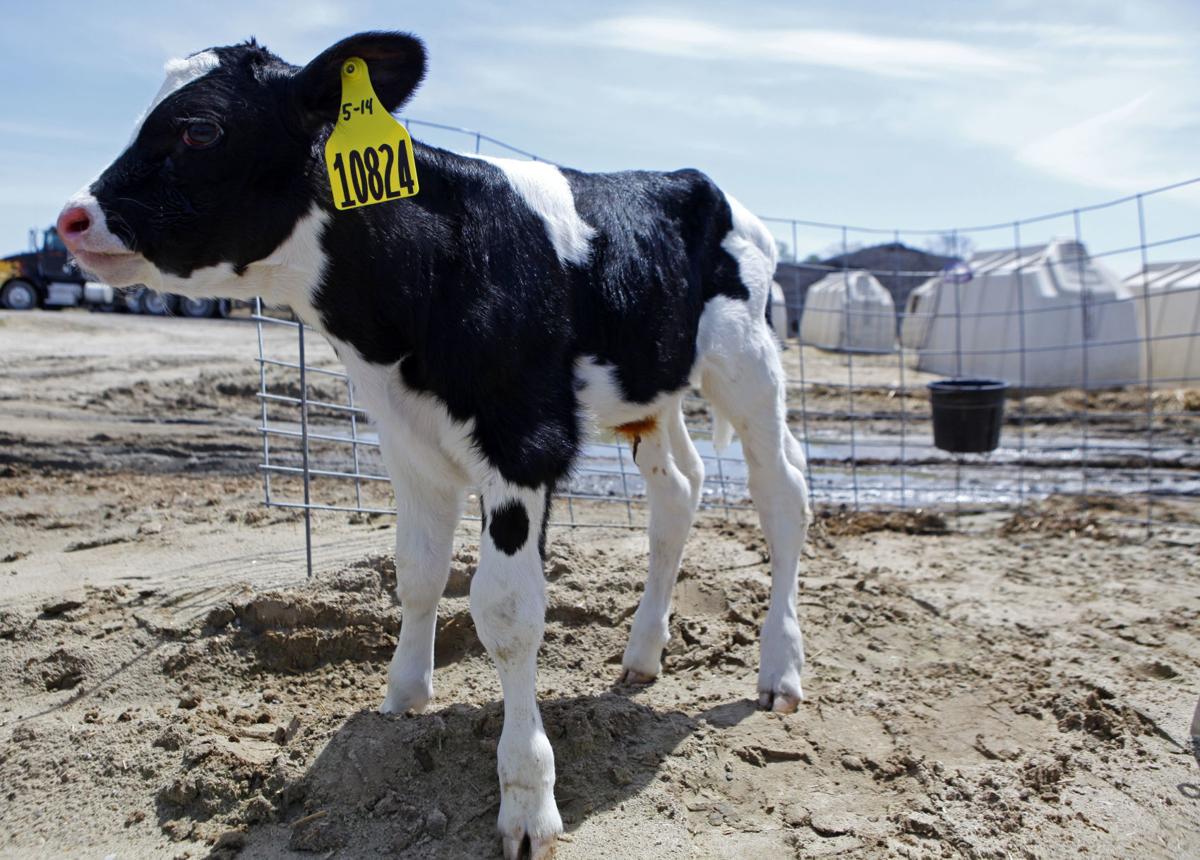 A newborn calf is shown inside EJ Dairies in Center Township. Edward "E.J." Hein took over the family farming business in 1980 at age 23 from his father. Hein, a third-generation farmer, has expanded the operation and now oversees the planting of some 5,000 acres and the milking of some 1,000 cows. 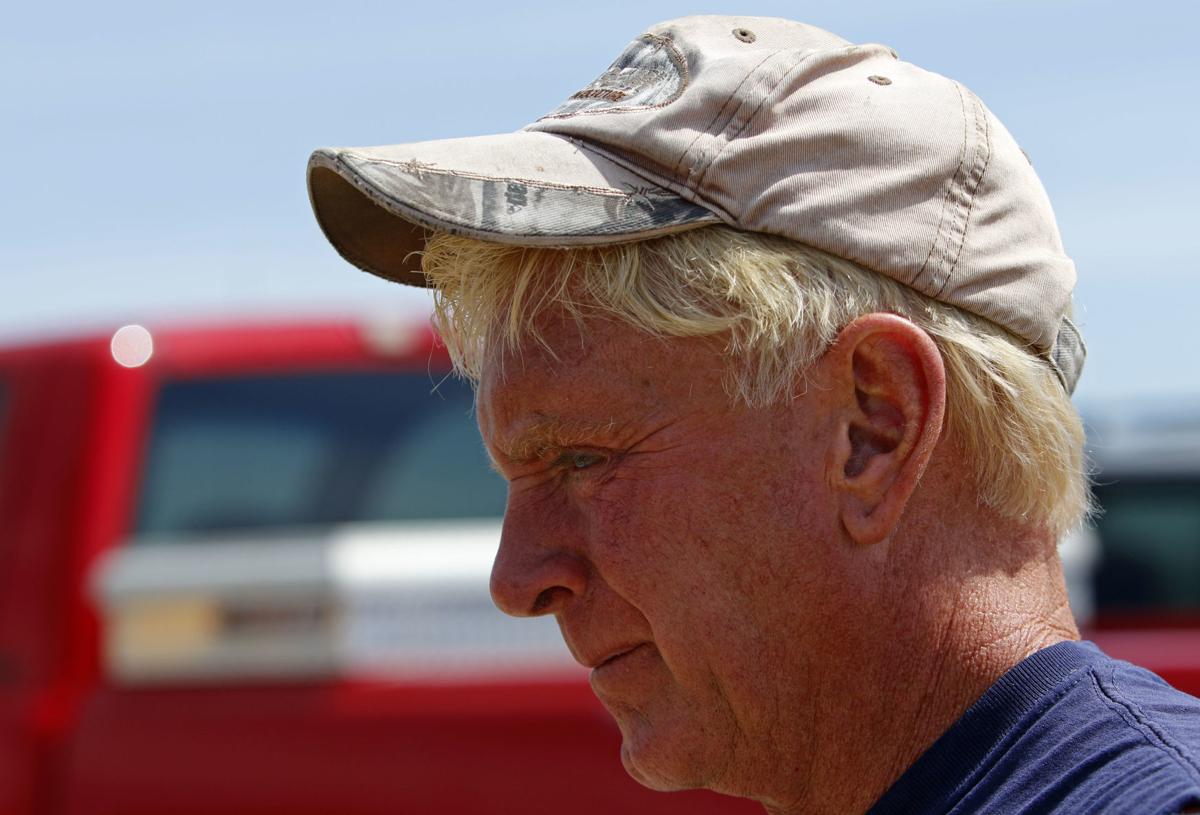 Edwards "EJ" Hein, owner of EJ Dairies in Center Township, talks about the impact the tariffs and weather have had on his business this spring. 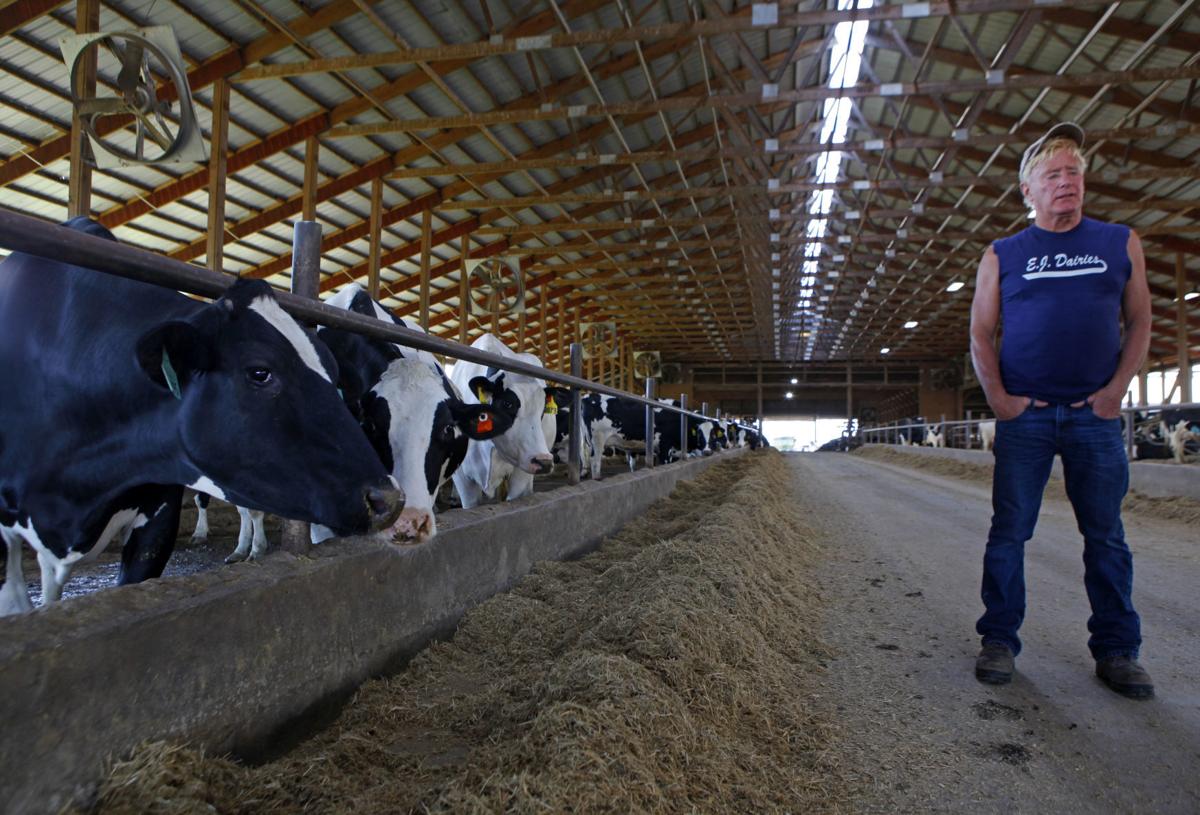 EJ Hein is the owner of EJ Dairies in Center Township.

Soybean prices plunged to a 10-year low last week after China announced a new round of tariffs in an escalating trade war, and the depressed prices have been taking a toll on Northwest Indiana's farmers.

"One area in which Northwest Indiana farmers, and the agricultural sector in general, is being severely affected by the trade war and tariffs is the soybean market," Indiana University Northwest assistant professor of economics Micah Pollak said. "Farmers have chosen to store as much of last year's soybean crop as possible, but this will only buy so much time. With no end to the trade war in immediate sight, farmers will likely be forced to sell much of last year’s crop at much lower than typical prices."

Some farmers could face bankruptcy, and the United States runs the risk of losing the Chinese soybean market to competitors like Brazil, Pollak said.

China is by far the biggest importer of U.S. soybeans in the world, and has been since about 2011, Purdue University Agricultural Economic Professor Wallace Tyner said. The United States exports about half its soybeans internationally, such as through the Cargill operations at the Port of Indiana-Burns Harbor, and China consumes about 62% of U.S. soybeans.

"They use it for oil and cooking and animal feed," Tyner said. "They only have so much land to grow crops, so they made the strategic decision to grow rice and corn and wheat. They import soybeans, which is mainly used as animal feed. They decided you can live without meat but you can't live without food."

The possibility of a country like Brazil moving aggressively into the market poses a long-term threat.

"If they make those investments, those markets are lost forever," Tyner said. "They have lower labor costs."

And the drop in prices might make it difficult for farmers in Indiana to secure loans from banks, for big-ticket purchases like tractors and for operating expenses, Tyner said.

"The margins are so thin bankers might start scrutinizing those loans," he said. "There are several dangers the longer this goes on."

Some farmers can switch acreage to corn, but they typically like to rotate the fields to ensure the soil gets enough nutrients, Tyner said. And the rainy weather this year has delayed the start of the planting season, which could force many farmers to grow soybeans if it becomes too late to put corn in the ground.

The countries of China, Japan, Canada and Mexico are the four biggest buyers of agricultural products, and there are disagreements with all of them.

"Farmers were led to believe this would be settled by March, and it's not been settled, and there is uncertainty about what comes next," said Hurt, an educator in Purdue's agricultural extension program.

'A passion for agriculture'

Optimism is something that is ingrained in the psyche of most farmers, Center Township farmer Edward "E.J." Hein believes.

That optimism about farming's economic future has been deeply shaken in Hein and other area farmers in light of the U.S. trade dispute with China.

"Agriculture has taken the brunt of this. We're talking billions of dollars in lost exports," Hein said.

E.J. Hein took over the family farming business in 1980 at age 23 from his father, Edward Hein, who was killed in a farm accident.

Hein, a third-generation farmer, has expanded the operation and now oversees the planting of some 5,000 acres and the milking of some 1,000 cows. He runs the farm with his two sons and one daughter.

The diversification has helped in the past, Hein said. If grain farming was bad, then that made milking cows the more profitable, and vice versa.

"The last three years that's all out the window," Hein said. "Agriculture has never been in the predicament it's been in for the last three to four years. This cycle should have been over in one to two years."

Porter County Farmer Tim Stoner said he understands why the Trump administration has confronted China over trade, such as to protect U.S. intellectual property. But he's been dealing with depressed soybean prices for about a year.

"I would say prices have been coming down significantly, to the lowest level in many years," he said. "Beet prices have probably dropped a dollar in the last month, and that's a lot."

Third-generation farmer Joe Tuholski said his family got out of the dairy business in 2000 because it wasn't profitable.

"We weren't making any money so we said, 'Let's get out of it,'" Tuholski said.

His family plants some 6,000 acres in soybeans and corn in LaPorte County and has made changes in management in response to the trade situation.

"We're trying to maximize our yields. If we get more yields, then if the prices are lower we have more crop to sell," Tuholski said.

Tuholski has two teenage sons to whom he hopes to pass down his family's farming business, something he loves.

This spring's cold and wet weather has proven to be a one-two punch to local farmers like Michael Hein and his father, Edward "E.J." Hein.

The word LaPorte is French for the door.

More people are working in Indiana or actively looking for work than ever before.

Purdue University Northwest is rolling out a banking concentration for finance majors in a first-of-its-kind offering in Indiana.

Jasper County farmer Mark Kingma has been tilling the soil for more than four decades and has never seen a spring as wet as this one.

For the first time, a U.S. Navy vessel will be commissioned in the largely landlocked state of Indiana.

NorthPoint Development and Dollar General have invested $40 million in the Midwest Trade Center, the former SpartanNash warehouse they have re…

After one of the most rain-soaked planting seasons in recent memory, farmers in Northwest Indiana qualify for natural disaster assistance.

The Food Bank of Northwest Indiana, the largest hunger relief operation in the Region, has named Victor Garcia its new executive director.

EJ Hein, center, poses for a photo with his sons, Stephen, left, and Mike at EJ Dairies in Center Township. Trade disputes have damaged business at the Hein family's farm, which includes 5,000 acres of crops and a 1,000-acre dairy farm.

A newborn calf is shown inside EJ Dairies in Center Township. Edward "E.J." Hein took over the family farming business in 1980 at age 23 from his father. Hein, a third-generation farmer, has expanded the operation and now oversees the planting of some 5,000 acres and the milking of some 1,000 cows.

Edwards "EJ" Hein, owner of EJ Dairies in Center Township, talks about the impact the tariffs and weather have had on his business this spring.

EJ Hein is the owner of EJ Dairies in Center Township.