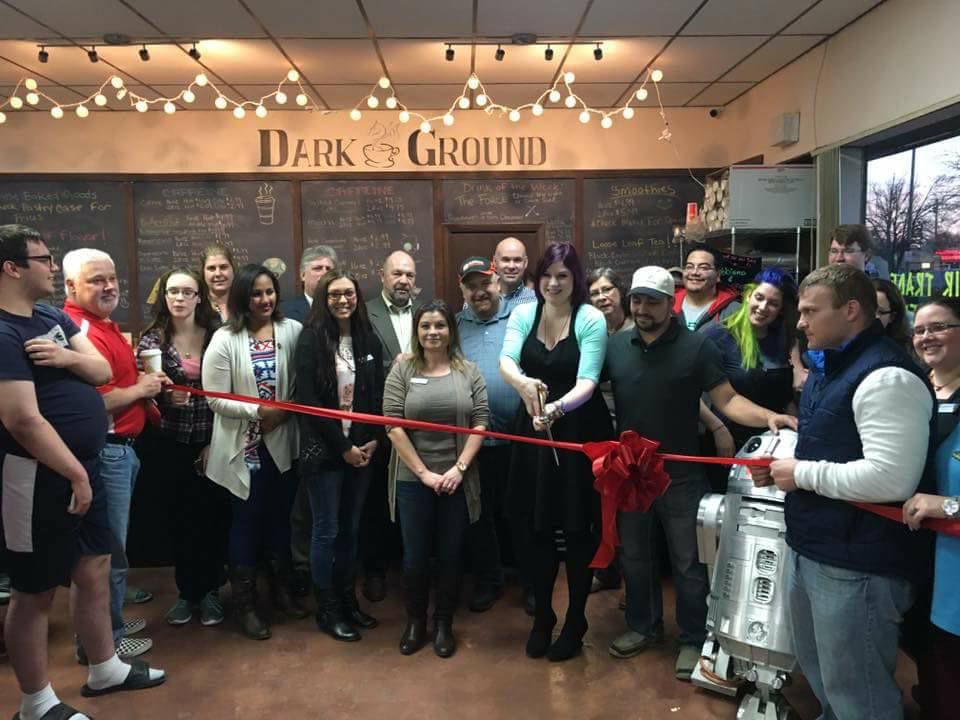 The Hobart Chamber of Commerce stages a ribbon-cutting for the Dark Ground Cafe, which Games Inn recently opened in downtown Hobart. 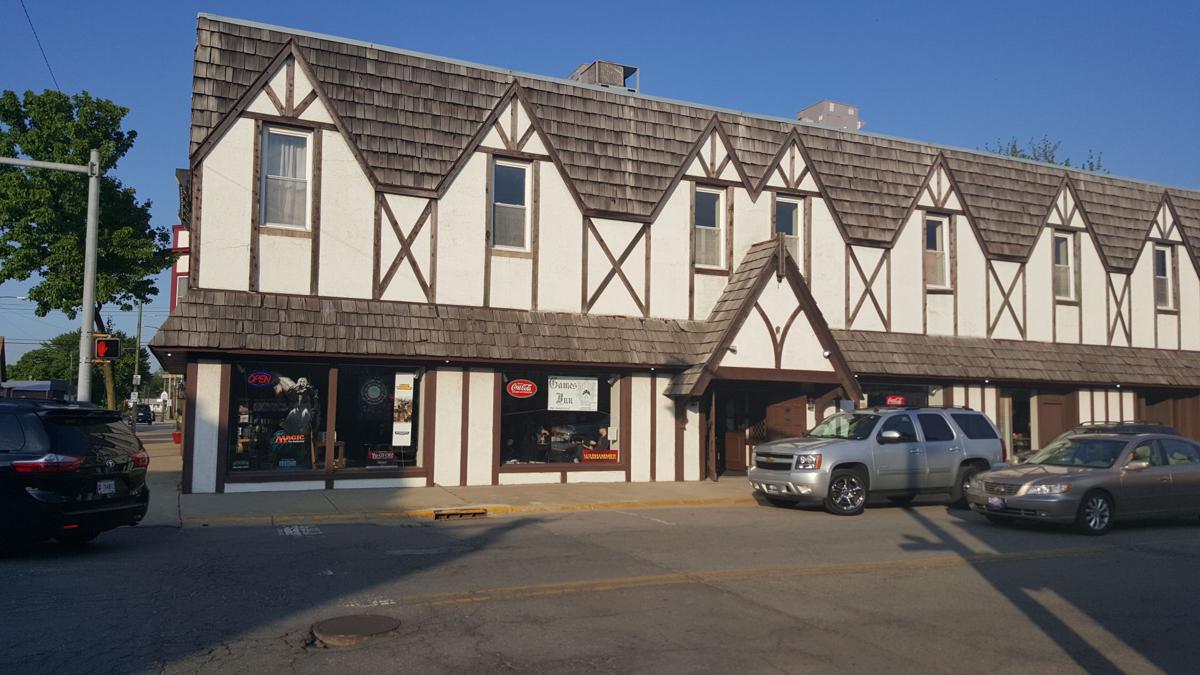 Hundreds visit the Games Inn in Hobart on busy nights. The board game shop recently opened the Dark Ground Cafe.

Games Inn in Hobart opened the Dark Ground Cafe, a new dining option downtown that will soon start serving ramen noodle dishes that have become trendy in Chicago and other big cities.

The popular board game store at 301 Center Street, which attracts as many as 300 people on busy nights, wanted to give patrons who can camp out there for a few hours something to eat. The cafe, which can seat as many as 100, is now serving coffee, smoothies, soups, sandwiches, pizzas and calzones that are baked in-house.

"We don't do any deep-frying. We want it to be a healthy option," said Nicki Jackson who owns the store along with her husband David. "It's comfort food. Our most popular items are roast beef, grilled cheese and turkey avocado Swiss."

Games Inn, which opened four years ago and now occupies a 107-year-old building that has been a car dealership, furniture store and a gym, grew its staff from two to nine employees with the addition. The store also expanded by adding a comic book section with more than 100 titles, including indie work by local artists like Dan Dougherty.

David Jackson's parents had a board game shop previously. Jackson and his wife decided to open Games Inn because when they wanted to locate a separate online business downtown, city officials wanted some sort of retail component. It was originally called Mr. Sweets Games & Candy, but they changed the name when they moved into their current spot, a 4,500-square-foot space on the first floor of a two-story building that looks like an Old World European inn and that was most recently home to Jim McGee's Health Club.

"We want to emphasize it was a games store where people could play Dungeons and Dragons and hang out," Nicki Jackson said.

The core business is selling board games and collectibles, as well as drinks and candy on game nights whose participants range in age between 2 and 70 years old, but who are mostly young adults. Games Inn has a library of more than 450 board games that anyone can come in and play without charge.

"It's a happy, friendly environment for families," Nicki Jackson said. "If you've got three or four kids, you have to spend at least $50 to do something together. Here you can come in and just buy a few fountain drinks and not spent a fortune."

The new Dark Ground Cafe is adding a new range of creative drink options, such as a Bulletproof, a coffee drink with coconut oil, grassfed butter and whipping cream as an appetite suppressant and to sustain mental acuity during long gaming sessions.

They also have drinks of the week, such as a nutty chocolate hazelnut latte that tastes like Nutella. There's even a Star Wars-themed "Light Side of the Force/Dark Side of the Force" peppermint mocha that is made with either white or regular chocolate, depending on whether the customer identifies more with Luke Skywalker or Darth Vader.

The cafe plans to deliver food throughout the downtown area and add a breakfast menu and ramen bowls soon.

A few new shops have come to downtown Whiting, which continues to gain retail momentum.

Warped Sportz has skated from its longtime home in Schererville to a new location in Crown Point.

A new coffee shop has replaced the Blue Room Cafe, a coffee shop that closed in downtown Hammond after 10 years and that had been a popular ha…

A new cafe is caffeinating Lansing.

The "Window to the Soul: Selections from the Joseph Kleemann Collection" opens Friday at the SideCar Gallery at 411 Huehn in Hammond.

No reason to be bored: There's a new game in town

In 2011, Merrillville resident Scott Hankins sent a request through the BoardGameGeek application that he was seeking someone to join in playi…

Hobart's Games Inn up for sale

Wizards and wargamers, take note that one of Northwest Indiana's largest game shops in on the market.

LiqGo! buys out two liquor stores in Griffith, one in Lake Station

Lexus of Merrillville honored as elite

The Lexus of Merrillville was one of only 168 Lexus dealerships nationwide to be honored as the Elite of Lexus.

Harbor Buick GMC closing in Portage after sale of property

After more than 20 years, Harbor Buick GMC is closing its Portage location at 6100 U.S. 6 after selling the property and consolidating its bus…

BNutty has found so much success selling its Irresistible Pretzel, Joyful Cranberry and other gourmet peanut butters at retailers like Strack …

TEDx Talks are coming back to bring big ideas to the Region for the third time.

Region residents should soon have an easier time getting their caffeine fix, since Gloria Jean’s Coffee is looking to open two to five more lo…

The Hobart Art Theatre, known for its splashy art deco architecture and late-night screenings of "The Rocky Horror Picture Show," has been sho…

After a number of calls inquiring about available event space, the South Shore Convention and Visitors Authority is shifting the focus of the …

MC Sports filed for bankruptcy Friday and announced plans to close 66 stores, including locations in Michigan City and Joliet, Ill.

"The Biggest Loser" season 14 winner Danni Allen will appear at the grand opening of a new Planet Fitness gym in Hobart.

Anytime Fitness, a fast-growing 24-hour gym chain, is planning a major expansion in the Calumet Region, where it's looking to open nine new lo…

Wet Seal is closing its stores in Hobart and Calumet City as part of a national shutdown of more than 170 stores.

Ramen competition will pit Region's top chefs against each other

A Ramen competition at Zorn Brewing Company will put Region's top chefs against each other on March 14.

The Hobart Chamber of Commerce stages a ribbon-cutting for the Dark Ground Cafe, which Games Inn recently opened in downtown Hobart.

Hundreds visit the Games Inn in Hobart on busy nights. The board game shop recently opened the Dark Ground Cafe.