The first building at the Digital Crossroads data center at the former State Line Generating Plant on Lake Michigan in Hammond should be operational early next year. 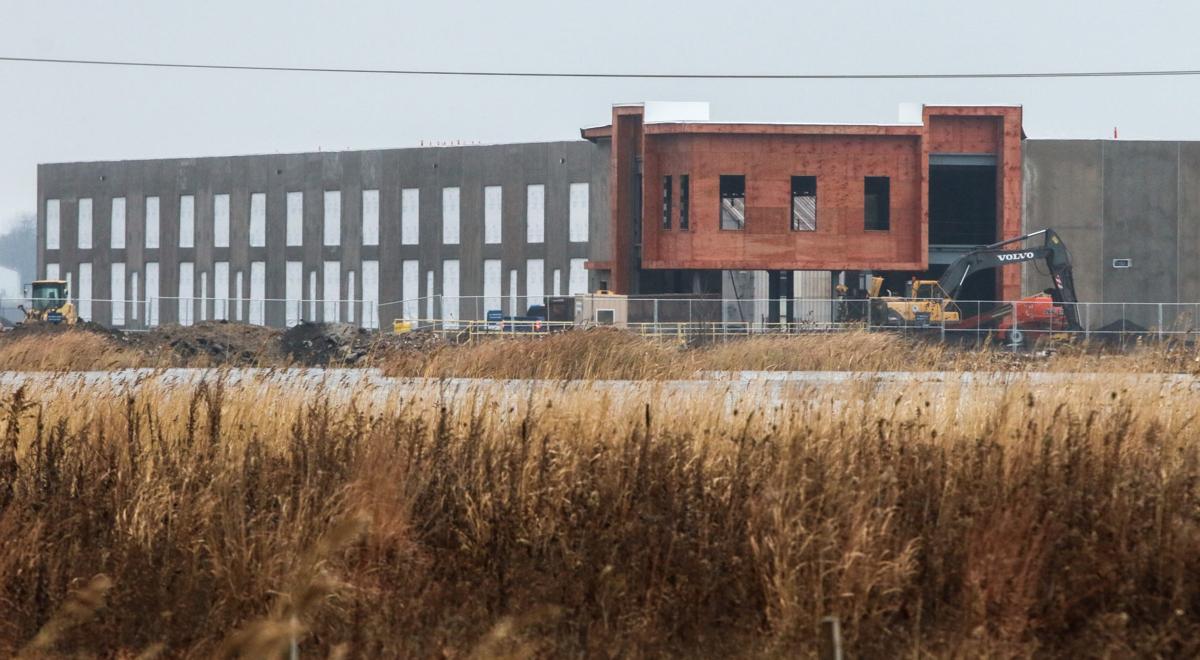 The shell of the first building at the Digital Crossroads data center at the former State Line Generating Plant on Lake Michigan in Hammond in largely complete. 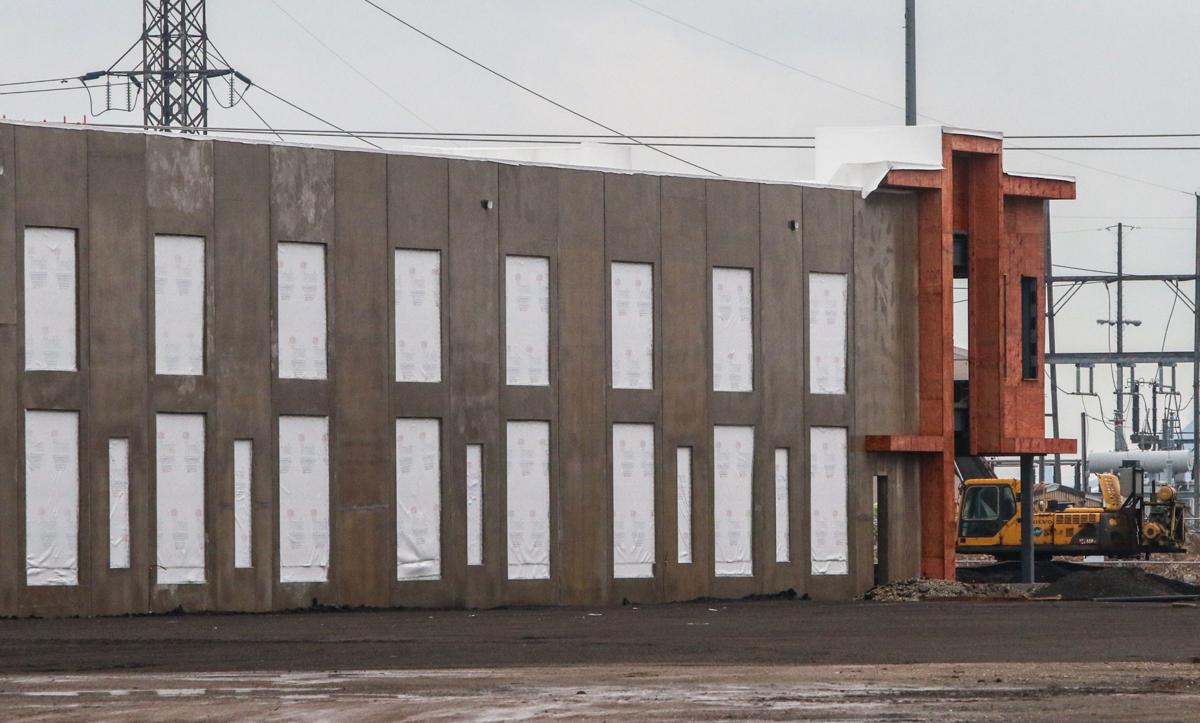 Work continues on the Digital Crossroads data center at the former State Line Generating Plant on Lake Michigan in Hammond, which could lease computer server space to as many as 20 companies.

HAMMOND — Construction has been completed on the shell of a $40 million building that will replace a former coal-fired power plant on Lake Michigan with a state-of-the-art data center that will help power websites, email and e-commerce.

Indianapolis attorney Tom Dakich said the first 105,000-square-foot Digital Crossroads data center building he and developer Peter Feldman are constructing at the site of the former State Line Generating Plant should be operational as soon as the end of the first quarter of 2020. It's the first phase of what could grow into a $200 million project that potentially could store data for large national companies like streaming services, health care systems and e-commerce sites.

"It's an enormous deal," Lakeshore Chamber of Commerce President Dave Ryan said. "It's replacing the coal-fired State Line Generating Plant and bringing $200 million back into Hammond."

Dakich said NIPSCO's recent decision to retire its own coal-fired power plants and cutting carbon emissions by 90% by 2030 in favor of wind farms and other energy sources would be big for business since many major Silicon Valley firms are conscious of their carbon emissions.

"It helps draw customers," he said. "The Facebooks and Amazons require huge amounts of energy but don't want to be involved in coal-burning. NIPSCO's been an amazing partner."

Local officials, including Hammond Mayor Thomas McDermott Jr., have touted the data center project as potentially transformative for the Region, as the digital infrastructure could help attract or foster more high-tech companies that could modernize and diversify the workforce.

More than 300 construction workers have been building the first structure at Hammond's border with Chicago.

"We have walls up," Dakich said. "We are moving ahead very quickly with all the fiber aspects. We're hoping to continue to get good weather."

Regardless of temperatures, construction crews should be able to continue to make progress through the winter months since the building is under roof. Workers now are installing the floor and hooking up fiber infrastructure that will transmit mass quantities of data to and from the site.

"We're putting in fiber conduit and getting it connected," he said. "We're getting the routes put together. People at NIPSCO and (the Northern Indiana Commuter Transportation District) have been great. They've been very helpful. We've been getting Northwest Indiana connected to the superhub in downtown Chicago."

Digital Crossroads operator DX Hammond OpCo named telecommunications and data center industry veteran David Hood, former president and CEO of Backplane Integrated Networks Corp., as its managing director of operations, and its leadership team has been seeking customers for the past two months.

"We've had meetings with 20 different companies throughout the country," Dakich said. "It's been going very well."

The data center will be filled with rows and rows of computer servers that will be cooled with water and lake breezes from Lake Michigan. The cluster of computing power, which will employ a skeleton staff of technicians and security personnel, can be used for cloud storage, to support instant messaging and enable online video games, among a number of other internet activities.

"Our customers will put in the servers," Dakich said.

Demand for data centers has been exploding nationwide as Americans spent more time on their phones and social media, as well as on online activities like streaming, shopping and gaming. The rise of the Internet of Things — as more and more cars, appliances, speaker systems, lights, thermostats, security systems and devises become wired — is expected to propel the U.S. data center market to revenues of more than $69 billion nationwide by 2024, according to a study recently released by ResearchAndMarkets.com.

The first building could have as few as four customers and as many as 20. Dakich, the brother of former Indiana University basketball standout and sports radio personality Dan Dakich, estimates it likely will end up serving about a dozen companies.

Once the first building of the Digital Crossroads data center is entirely leased out, construction should begin on the next phase. It could ultimately have 400,000 square foot and 40 megawatts of power.

"We're right on schedule," Dakich said. "I have to give a shout-out to the labor force. Randy Palmateer and Dewey Pearman have an unbelievable labor force here."

The Lakeshore Chamber of Commerce will host Hammond Mayor Thomas McDermott Jr. at a Jan. 31 event where the mayor will address recent successe…

Unemployment has been falling more or less steadily across the state and nation since the depths of the Great Recession a decade ago, and now …

IU could be among the next universities to go "test optional", ditching SAT and ACT requirements from college admissions

IU is taking its next steps toward becoming a "test-optional" university — meaning students may no longer need to provide their SAT or ACT scores to apply for classes on IU campuses. More on what that means for prospective students here

The Indiana Workforce Recovery initiative has provided education to about 3,000 business leaders and distributed more than 40,000 prescription…

Advanced Engineering Services opened a new office just north of the Borman Expressway in Hammond, from which it will help with construction an…

Nearly 40% of people have had e-commerce packages stolen

A study by Security.org found that package theft is becoming increasingly common as e-commerce grows.

NIPSCO agreed to pay a fine of $1 million after Department of Labor found it discriminated against more than 1,500 female and black job candidates.

The Lakeshore Chamber of Commerce will host Hammond Mayor Thomas McDermott Jr. for his annual State of the City address next month.

Dr. Aaron Ruter, a foot and ankle surgeon at Lakeshore Bone & Joint Institute in Crown Point and Schererville, earned a teaching position with The Association of Extremity Nerve Surgeons.

The Indiana Chamber of Commerce is asking for nominations for the 2020 Ogletree Deakins Human Resources Professional of the Year Award.

NIPSCO is now using drones to inspect power lines and other electric infrastructure.

Region steel mills stockpile iron ore and other raw materials all year to get ready for the seasonal end to Great Lakes shipping.

A new Indiana Workforce Recovery initiaitive will help employers across the state craft recovery programs for employees who abuse opioids or other drugs.

NIPSCO will award nonprofits up to $5,000 for environmental education or restoration projects.

Hammond Horseshoe Casino, Centier Bank and other Region employers were named among best places to work in the Hoosier state.

A BMW driver who went 105 mph on the Borman Expressway Saturday was busted for an OWI and drugs, according to police.

Storm may bury Region under more than 6 inches of snow, flood lakeshore

A winter storm Tuesday may bury Region under more than six inches of snow, according to the National Weather Service.

The new Digital Crossroads data center is now open for business at the border of Hammond and Chicago on Lake Michigan. Construction was completed on the $40 million 105,000-square-foot building where national companies will store their data. Indianapolis attorney Tom Dakich and developer Peter Feldman built out the first phase of what could grow into a $200 million project.

The Lakeshore Chamber of Commerce is getting back together in person again.

3-million-square-foot industrial center could bring up to 4,000 jobs to polluted site in East Chicago

A 3-million-square-foot industrial center could bring up to 4,000 jobs and 200 million in investment to a polluted site in East Chicago.

NIPSCO announced it could retire its coal-fired Michigan City Generating Station on the Lake Michigan lakefront up to two years earlier.

The first building at the Digital Crossroads data center at the former State Line Generating Plant on Lake Michigan in Hammond should be operational early next year.

The shell of the first building at the Digital Crossroads data center at the former State Line Generating Plant on Lake Michigan in Hammond in largely complete.

Work continues on the Digital Crossroads data center at the former State Line Generating Plant on Lake Michigan in Hammond, which could lease computer server space to as many as 20 companies.