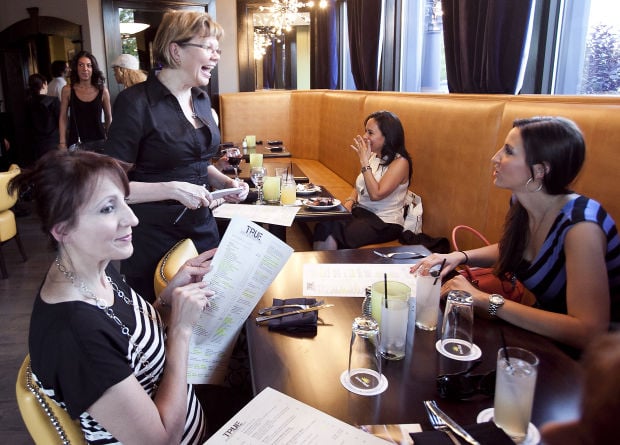 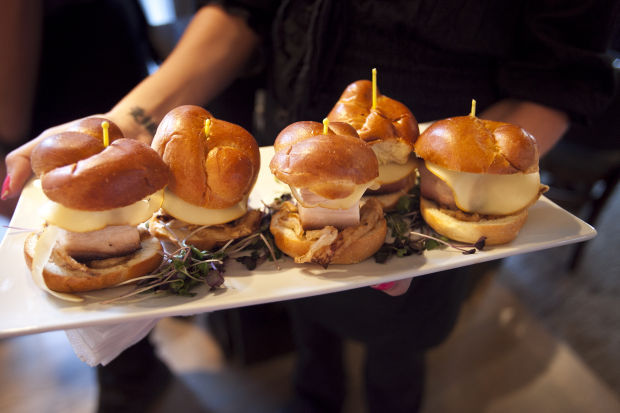 A tray of pork belly sandwiches is shown at True BBQ and Whiskey Bar on Tuesday night.

“True BBQ will definitely be filling a desired niche in the Northwest Indiana market,” said Progressive Dining marketing director Joshua Patrick. “The next closest market to offer a modern BBQ experience is Chicago, so the owners felt that it made sense to bring that experience to the region.”

The restaurant’s menu boasts a mix of traditional barbeque meats like ribs and briskets along with both vegan and gluten-free options to cater to a wide range of diners’ tastes. All of the restaurant’s sauces and rubs are homemade, and the meats are smoked using aged cherry and hickory wood.

The whiskey bar side of the establishment offers a variety of drinks including crafted cocktails and premium whiskeys. Patrick said the restaurant’s goal is to be able to cater to both the educated bar patron while also helping the more common patron become more knowledgeable.

“On both sides, the BBQ and the Whiskey Bar, our staff has been extensively trained by our chefs, managers and reps to provide a truly memorable experience,” he said.

Loring Banks Designs developed the interior design of the restaurant aiming to deliver “a Chicago modern twist on the traditional BBQ themes of the 20th century,” Patrick said. The restaurant features a number of elegant chandeliers and a handful of television monitors common in barbeque restaurant designs.

In addition to dine in, True BBQ and Whiskey Bar will also offer customers home delivery for the surrounding area.

Customers looking to eat at True BBQ and Whiskey Bar on site can dine in at the restaurant from 11 a.m. to late night hours still being determined.

With the opening coming after months of developing the idea, management hopes the restaurant will become a staple in area dining.

“Three things will capture both short-term and long-term success,” Patrick said. “Our experienced chefs and kitchen staff, our knowledgeable service staff and our unique concept and approach to providing modern BBQ.”

"If you want to get hired here, now's the time."

Baseball Card Exchange in Schererville authenticated the case as being real and untampered with but then internet sleuths and Pokémon card experts started to question the authenticity online.

The Lansing Walmart will remain temporarily closed for the foreseeable future someone set fires there this weekend.

Shelves bare amid another surge in pandemic-related shortages

At least a few shelves have been empty or picked nearly clean at supermarkets and pharmacies across Northwest Indiana in the latest surge in pandemic shortages.

Daniel Vicari was appointed executive director of the airport Wednesday.

U.S. Steel to invest $3 billion to build 'most advanced steelmaking facility in North America' in Arkansas

U.S. Steel will continue to invest in mini-mills in the South after electing to build "the most advanced steelmaking facility in North America" in Arkansas.

The average gas price in Indiana jumped 17 cents per gallon to $3.21 per gallon in one of the country's largest increases.

More people moving to Indiana than moving away, largely because of family or jobs

About 50.1% of state-to-state moves involving Indiana were inbound, while about 49.9% were outbound, according to the United Van Lines' 45th annual National Movers Study.

A tray of pork belly sandwiches is shown at True BBQ and Whiskey Bar on Tuesday night.