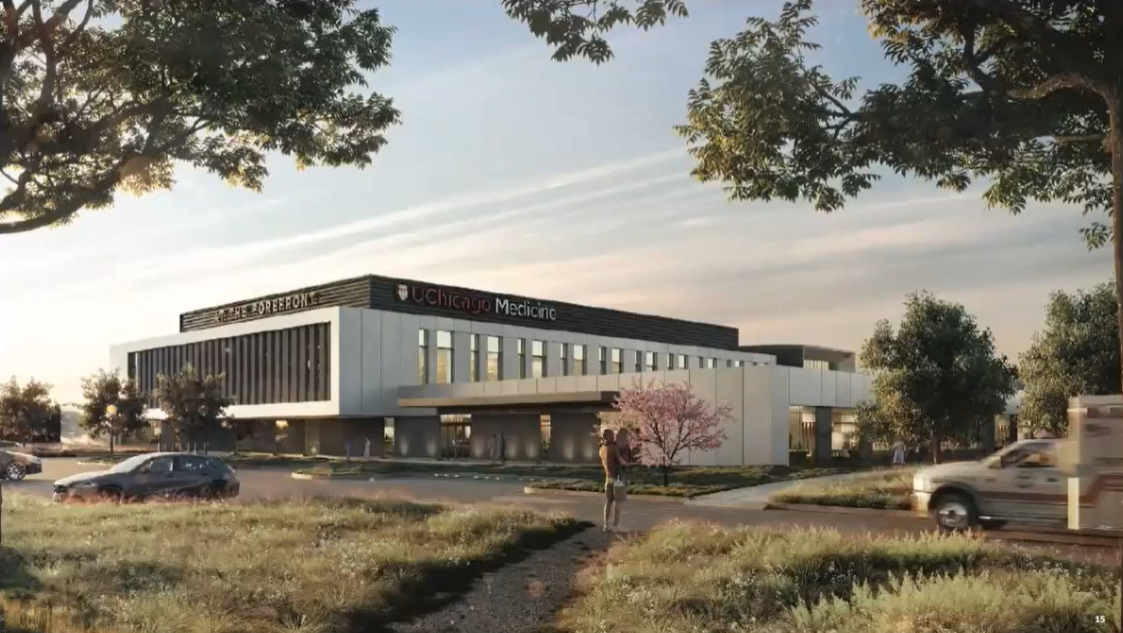 University of Chicago Medicine is seeking approval to build the specialty care center shown in this rendering in Crown Point. 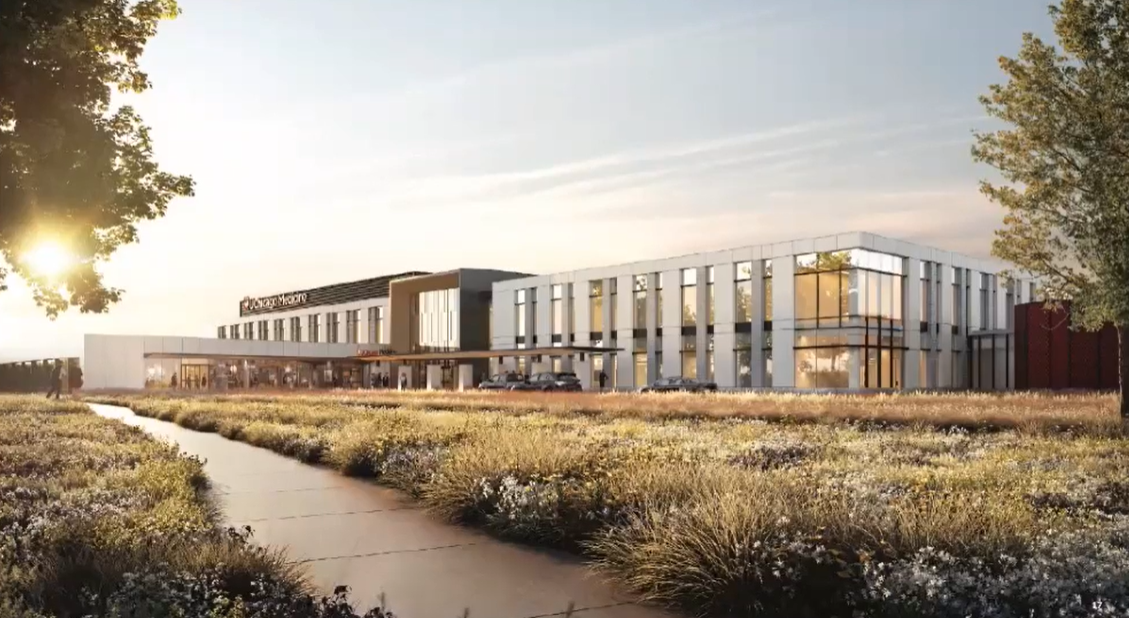 University of Chicago Medicine is seeking approval to build this specialty care center in Crown Point. 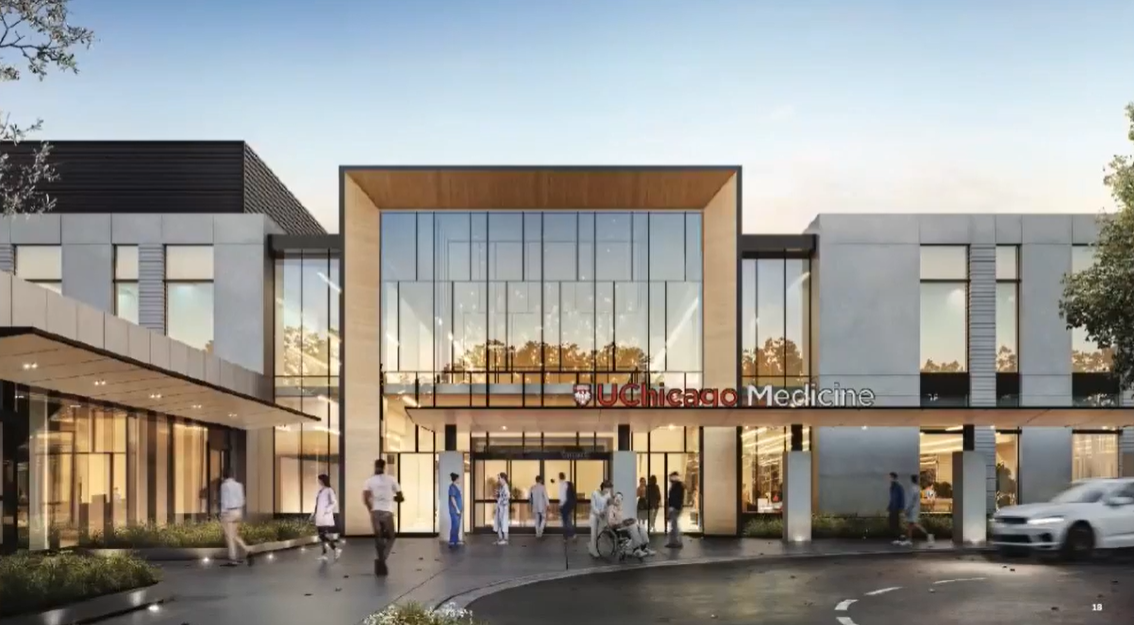 This rendering shows the view from 109th Avenue of a proposed University of Chicago Medicine facility in Crown Point. 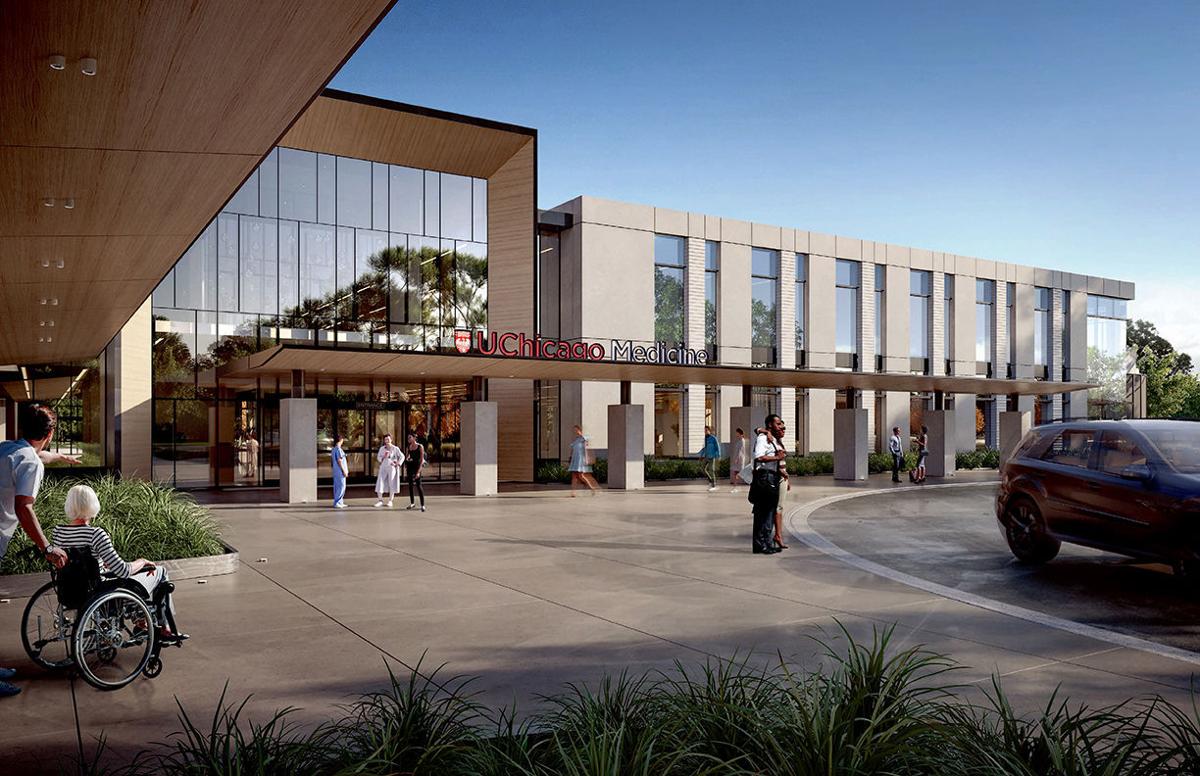 Project details were made public at a Board of Zoning Appeals meeting during which the city board gave a favorable recommendation for a special use variance to allow operation of a hospital at the site in the Beacon Hill development. That variance must be approved by the City Council, which next meets Nov. 1. The BZA also approved variances to allow the building and its signage to exceed normal standards.

"This project has been years in the making," Jake Rohe, a principal at the medical property developer PMB, told the board. The University of Chicago center will take up about one-third of a 46-acre campus. It will sit near the I-65 interchange at 109th Avenue, and is expected to create about 150 jobs and see 110,000 patient visits annually.

"This is a very important market for us," Audre Bagnall, an executive vice president at UChicago Medicine, told the board. She noted that 15% of Northwest Indiana residents currently seek medical care outside of the area, and 21% of them go to the University of Chicago.

Board members questioned the project's managers about its competitive impact on current health care providers. Bagnall said the motivation was instead to fill specialized needs the University of Chicago could provide expertise in, particularly serving Region residents who already go to academic hospitals in Illinois.

She also said the new facility would lead to some consolidation of the network's own services, including by moving pediatric and oncology services currently provided in Merrillville and Schererville to Crown Point.

“UChicago Medicine’s reputation for providing high-quality care and for bringing research to the bedside is built around the concept that a multidisciplinary approach — specialists and subspecialists working together with community physicians and health systems — is best for patient care and for treating complex diseases and conditions,” said Dr. Kenneth Polonsky, dean and executive vice president for medical affairs at the University of Chicago. “The proposed facility would allow our physicians to collaborate with community providers to deliver an integrated and seamless experience for patients who need convenient access to advanced care, clinical trials and the latest diagnostic and treatment options.”

The only hesitancy among BZA members regarded a request for monument signs exceeding the city's size standards. The board ultimately approved the variances, citing the need for greater visibility for a medical center.

"It's so nice to know that Illinois has figured out there are people here," board member Dan Rohaley said of the commitment to Northwest Indiana and Crown Point.

• a micro-hospital, with an emergency department and short-stay inpatient unit

Access to the site would be from a new Virginia Street off, which would connect to 109th Avenue on the west side of the new facility.

“The Northwest Indiana community is important to us, particularly since so many of our patients and employees call this region home,” said Tom Jackiewicz, president of the University of Chicago Medical Center and chief operating officer of the UChicago Medicine health system, in the news release following Monday's meeting. “Many of our patients spend time traveling from Northwest Indiana to reach our facilities to get the care they need. Our proposed facility would make the lives of our patients a little easier.”

Crown Point Mayor David Uran said the project will enhance the city's profile as home to a variety of general and specialized health care providers.

The record price was achieved Nov. 9 during an auction featuring more than 50 bidders.

Northwoods restaurant and music venue to return: 'We're going to get life flowing through these logs again'

Northwoods is returning as Northwoods Falls. Styled after a woodsy Wisconsin lodge, the outdoors-themed eatery and nightlife spot was a popular place dance, drink Leinenkugel and hear live local music.

Valparaiso-based AVRO Development is poised to move forward with a development it says "will have a significant economic impact on the City of Valparaiso, Porter County and the Chicago metropolitan area."

CVS plans to shutter 900 stores nationwide as it pivots to offering more primary care and minute clinic services, as well as prescription delivery.

Burn ‘Em Brewing, the acclaimed craft brewery known for its unorthodox beers in Michigan City, is planning a major expansion that will relocate it to a more prominent and visible spot on Dunes Highway closer to downtown.

The Devil's Trumpet Brewing Company is closing and selling its taproom though it will continue production and distribution of popular beers like Make It a Cheeseburger, My Ghetto and Night Goat.

Cleveland-Cliffs finalized a $775 million deal that allows it to enter the scrap business and make more recycled steel.

The Northern Indiana Commuter Transportation District Board of Trustees approved a $304.8 million construction contract with the Walsh/Herzog joint venture Monday.

University of Chicago Medicine is seeking approval to build the specialty care center shown in this rendering in Crown Point.

University of Chicago Medicine is seeking approval to build this specialty care center in Crown Point.

This rendering shows the view from 109th Avenue of a proposed University of Chicago Medicine facility in Crown Point.