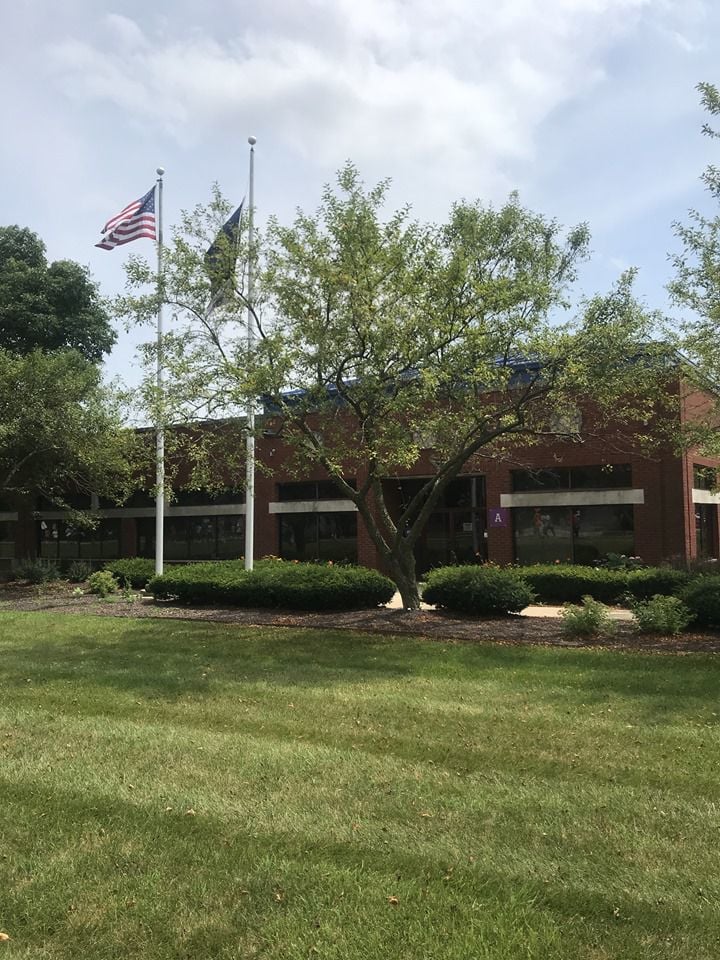 Regal Beloit plans to shut down its Valparaiso bearings plant where workers have been striking since June 30th. 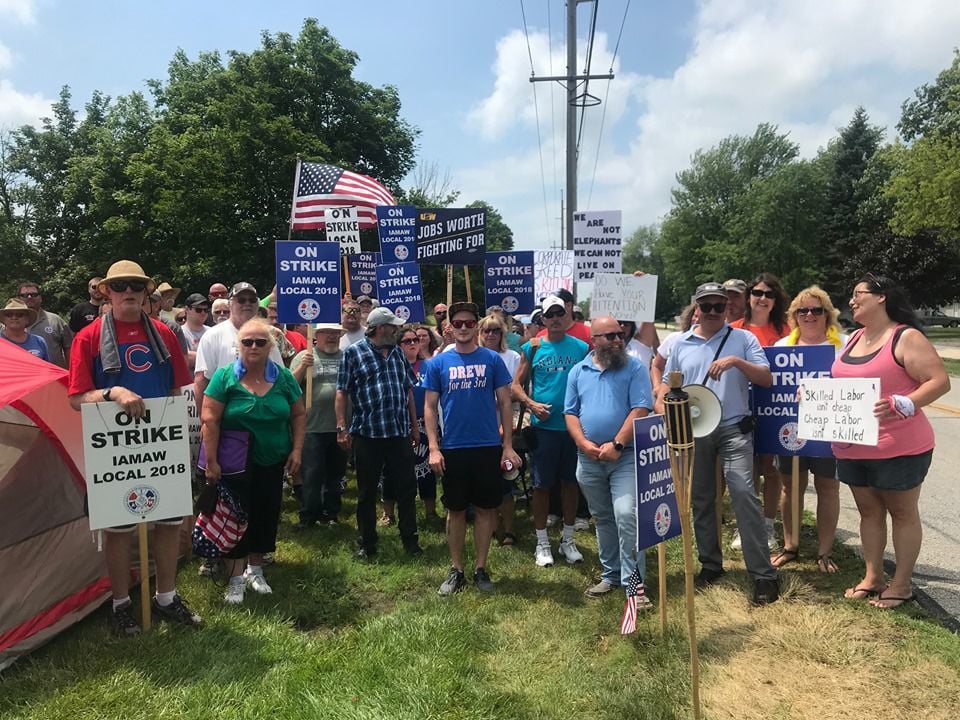 Regal Beloit plans to shut down its Valparaiso bearings plant, where workers have been striking since June 30. Workers are shown picketing earlier this summer.

Regal Beloit plans to shut down its Valparaiso plant where workers have been striking since June 30 for better wages and more affordable health care. At least 160-170 workers will lose their jobs unless the company and union can salvage some type of agreement from an impasse that has lasted nearly two months.

The Wisconsin-based company told the International Association of Machinists Local 2018 that it intends to close the plant at 2300 Evans Ave. in Valparaiso, part of a 109-year-old manufacturing operation that makes bearings for helicopters and planes, including Apaches and Air Force One.

"On Aug. 27, 2019 representatives from Regal Beloit met with IAMAW Local 2018 and a federal mediator to continue our collective bargaining negotiations," Regal Beloit Vice President-Business Development and Investor Relations Robert Cherry said. "During this session, we informed Local 2018 that after further review of the current operations in Valparaiso, we intend to discontinue our operations at this facility, exit certain products and move the remaining work to our Monticello, Indiana, plant. This was not a decision that we made lightly, and a number of factors were considered including customer orders, inventory levels and overall plant efficiency. We are committed to further discussions with the union within the collective bargaining process. We will continue to rely on our contingency plan in order to provide our customers with the highest quality products and service.”

Workers voted 99-5 to strike because of frustration with wages as low as $15 an hour and health insurance out-of-pocket maximums of up to $20,000 for a family. Lead negotiator David Gault has said the company rejected the union's proposal for 75-cent per hour raises and an out-of-pocket maximum of $15,000 for health care coverage, saying it already had made its final offer.

About 130 union workers since have been picketing outside the plant, which is located in a largely residential neighborhood on Valparaiso's north side.

The bearings manufacturing operation has a long history in Valparaiso and is even older than U.S. Steel's Gary Works. Regal Beloit, a multinational electric motors manufacturer, has only owned the former McGill Manufacturing Co. for five years.

"The city was informed today that Regal Beloit intends to relocate its Valparaiso operations on Evans Avenue to other Regal facilities. No impact is anticipated at Regal’s Lafayette Street facility," Mayor Jon Costas said. "This decision would impact approximately 110 union workers and another 50-60 nonunion management positions. As a community, we are disappointed that Regal is considering shutting down this productive facility and urge them to reconsider this unfortunate option. It is the city’s understanding that no timetable for the relocation has been established and discussions with union representatives are ongoing. We urge both sides to work earnestly toward a compromise so that work can continue without any jobs being lost. The city has been in contact with both IAM and company representatives and offered to assist, as needed."

"Another example of corporate greed, this time from @RegalBeloitCorp," he tweeted. "This strike has gone on for over a month. Enough is enough. I stand in solidarity with these @MachinistsUnion workers in their fight for dignity and justice in the workplace."

The Valparaiso factory was formerly known as McGill Manufacturing, which once was one of Porter County's largest employers with 1,500 employees and annual sales of $50 million. It made bearings for U.S. Army tanks during World War II.

The ball and roller bearings factory was founded by James H. McGill as the Crescent Company in 1905, but it was rebranded as the McGill Manufacturing Co. five years later. It has produced bearings for an array of products such as Levolier pull chain switches, pull husks, pull sockets, switches, conduit boxes, porcelain brackets, blowtorches and lamp guards.

Emerson Electric Co. acquired McGill in 1989 and made it part of its Power Transmission Solutions group before selling it to Regal Beloit in 2014.

Congressman Pete Visclosky, D-Gary, had tried to persuade Regal Beloit to reach an agreement with the striking workers and joined them on the picket line last month.

“It has been brought to my attention that present discussions are at a standstill, and I am disheartened that contract disagreements have led members of Local Lodge 2018 to strike," he wrote in a letter to the company in July. "This situation has already left a negative impact on our local union members and their families, as well as the management of Regal Beloit. Both parties should recognize that Regal Beloit and all their employees are an important part of our Northwest Indiana community and play a crucial role in our economy. I encourage the Regal Beloit management to join the members of Local Lodge 2018 and reconvene to collectively bargain in good faith.”

Drawing from his years in the family business, Jim McGill had the opportunity to carry on the legacy and lessons fostered during his family’s …

VALPARAISO — Robert Christopher, a Valparaiso resident who worked on a punch press making helicopter bearings for McGill Manufacturing for eig…

After two months, striking Regal Beloit workers have agreed to return to work so the International Association of Machinists and Aerospace Wor…

After surging in July, steel import permit applications in the United States plummeted by 40.8% year over year to 2.1 million tons in August.

Steel imports plunge by 34% in August

Steel imports plummeted by 34% in August, according to preliminary U.S. Census Bureau data.

Median income in Indiana ticked up slightly last year by $522 to $55,746 a year, an increase of less than 1%, according to recently released U…

The Indiana Manufacturers Association and Conexus Indiana are partnering on workforce development initiatives to prepare more Hoosiers to work in the field of advanced manufacturing.

U.S. Steel says a switch to natural gas at two boilers at Gary Works would result in a decline of 142.64 tons a year in carbon dioxide emissions there.

Next May, Regal Beloit America plans to permanently close a helicopter bearing factory that's been a major employer in Valparaiso for more than a century after workers went on strike last summer.

Region's manufacturing sector grapples with COVID-19 and its repercussions

Thousands of Region factory workers were laid off, at least temporarily, as the coronavirus pandemic roiled the Region's manufacturing sector in 2020.

Regal Beloit plans to shut down its Valparaiso bearings plant where workers have been striking since June 30th.

Regal Beloit plans to shut down its Valparaiso bearings plant, where workers have been striking since June 30. Workers are shown picketing earlier this summer.