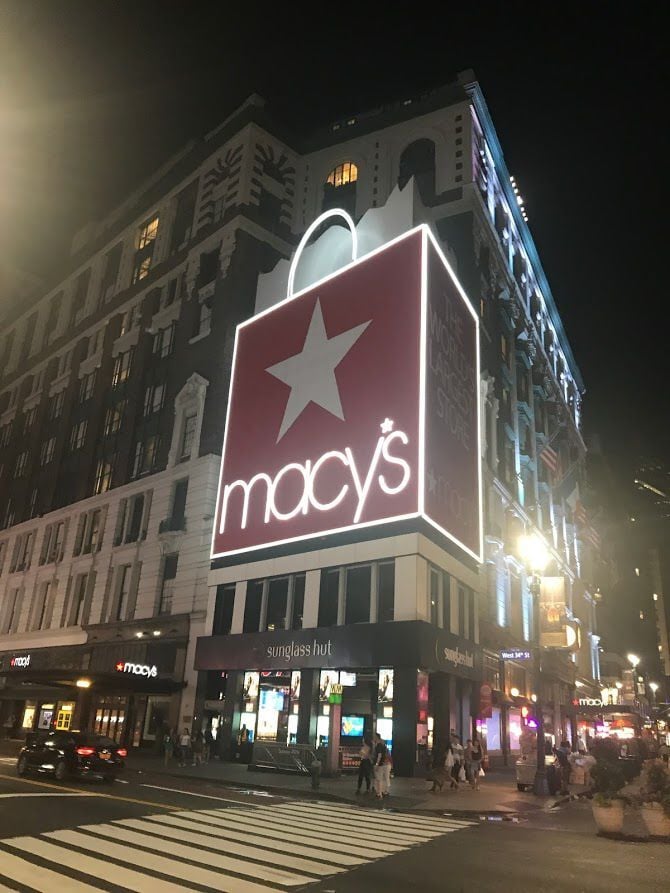 A Macy's store in New York City is shown. 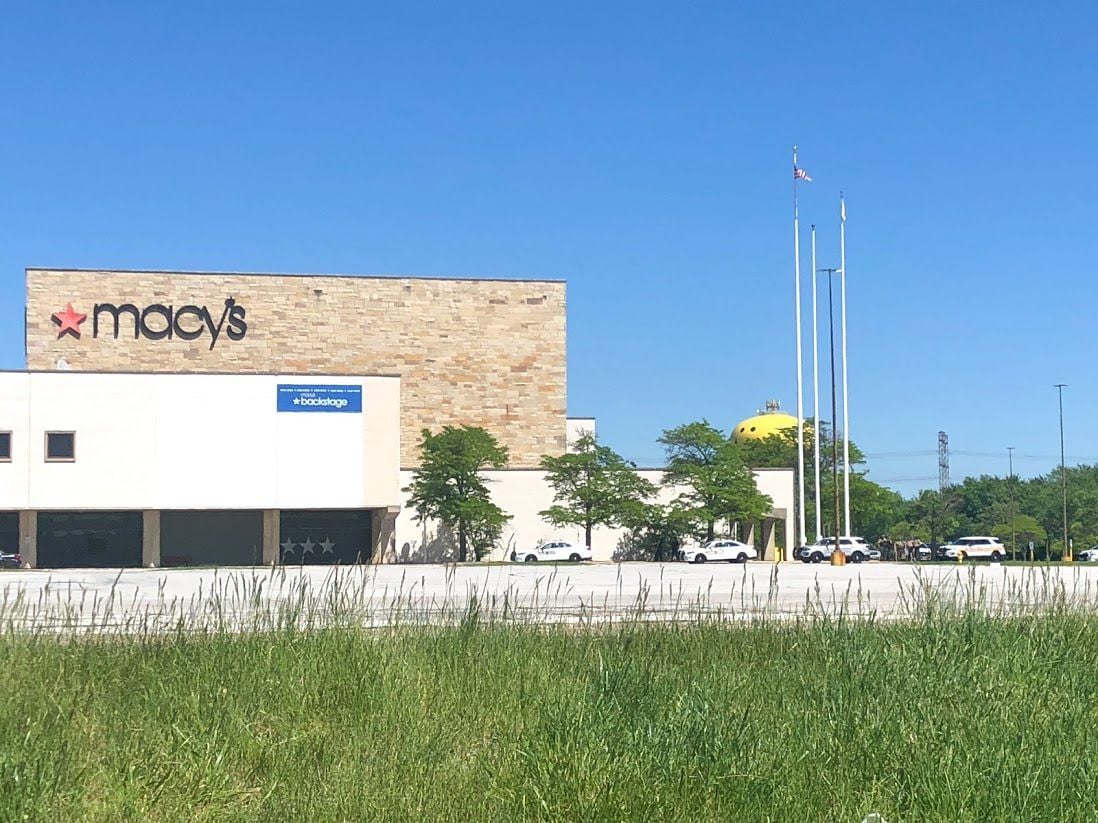 The Macy's at River Oaks in Calumet City is shown.

Macy's announced it is closing 45 more department stores nationally in 2021, including at Water Tower Place in Chicago and College Mall in Bloomington, as part of a previously announced cost-cutting measure.

But the New York City-based retailer's local stores at Southlake Mall in Hobart and River Oaks Center in Calumet City appear to have survived the latest round of closings.

"We have no announcements to make regarding Macy’s Southlake Mall, Macy’s River Oaks Center or our other Macy’s locations within the states of Illinois and Indiana," spokeswoman Julianne Olivo said.

Macy's, which has been the largest department store chain left standing in the country since 2015, did confirm it was closing its Water Tower Place store on the Magnificent Mile in downtown Chicago and its store in Bloomington.

"Macy’s Water Tower Place has been honored to serve its customers on the Magnificent Mile for 45 years," Olivo said. "Macy’s is committed to the greater Chicago community. We will continue to serve our customers at Macy’s on State Street as well as in a number of suburban locations, online at macys.com and the Macy’s app."

Macy's, which has struggled because of increased competition from ecommerce and the effects of the coronavirus pandemic, also will shut down the store it's run in Bloomington near Indiana University's main campus for the last 38 years.

"After careful consideration, Macy’s has decided to close our College Mall location in Bloomington. This closure is part of the company’s strategy announced in early 2020," Olivo said.

She said news of the closures was shared with employees at impacted stores.

"Regular, non-seasonal colleagues who we are unable to place at a nearby Macy’s store will be eligible for severance, including outplacement resources," she said.

Clearance sales will begin this month and run for eight to 12 weeks.

The department store chain, which sells women's and men's clothing as well as home goods and furnishings, still operates more than 540 stores nationwide.

The brick-and-mortar retail sector has been struggling because of competition with e-commerce giants like Amazon, eBay, Wayfair, Chewy and Zappos. But 2020 presented unprecedented challenges because of COVID-19 and the resulting lockdowns and restrictions. Here's a look at stores in the Region that closed, announced they would close, filed for bankruptcy or were saved from closure in 2020:

Pier 1 to close stores in Hobart and Valparaiso

Pier 1 is closing its stores in Hobart and Valparaiso, but the Schererville location will remain open.

Art Van Furniture to close all stores, including in Hobart and Portage

Art Van Furniture to close all stores, including in Hobart and Portage.

Family Video, the Glenview, Illinois-based company that's now the largest video store chain left in the United States, is closing 200 locations across the country this month, including in Dyer and Valparaiso.

Bed Bath & Beyond to close stores in Hobart, Orland Park

Bed Bath & Beyond plans to close its locations in Hobart and Orland Park before the end of the year.

Helzberg Diamonds has shuttered its location by the Southlake Mall in Hobart.

Carson's, the iconic Midwestern department store chain that has been run out of Merrillville as an e-commerce site since it collapsed into bankruptcy in 2018, closed its only remaining brick-and-mortar store in Evergreen Park, Illinois.

The bankruptcy could deliver a big blow to the Southlake Mall and Lighthouse Place Premium Outlets.

The California-based retailer plans to keep open its stores, including its Hobart location at 2108 E 80th Ave. The musical superstore across from the Southlake Mall has long been a destination for musicians from across Northwest Indiana.

JC Penney, which already had filed for bankruptcy and announced it was shuttering 230 stores nationwide, said it would close its Calumet City department store at 200 River Oaks Drive. The troubled retailer is shuttering 154 stores this summer and plans to announce another wave of closures in the next few weeks.

The J.C. Penney at River Oaks Center has been spared from a previously announced closure as the troubled retailer works through a Chapter 11 bankruptcy.

A longtime customer is buying the Brumm's Bloomin' Barn florist and gift shop in Highland, which will become Bloomin' Barn next year.

Piper Boutiques is closing after 37 years in Valpo, while businesses across Northwest Indiana are limping on and looking for the public's support while still offering freebies for health care workers and first responders.

Macy's won't say whether its stores at the Southlake Mall and River Oaks Center will make the cut.

Pier 1 files for bankruptcy, will close Valpo store next week

Pier 1 Imports filed for bankruptcy as it holds liquidation sales at its stores in Hobart and Valparaiso.

The era of e-commerce has been a challenging one for the Region's retailers, leaving many storefronts both big and small empty in recent years.

The Goodman Theatre is giving the public a free audio version that will go live at 7 p.m. Tuesday. The Christmas classic can be streamed online throughout December.

The Walnut Room in Macy's Department Store on State Street in downtown Chicago, a longtime Christmas tradition, is restricting itself to reservations and takeouts during the coronavirus pandemic that's killed more than 215,000 Americans thus far.

The Walnut Room in Macy's Department Store on State Street in downtown Chicago, a longtime Christmas tradition, is restricting itself to reservations and takeouts during the coronavirus pandemic that's killed more than 215,000 Americans thus far.

The J.C. Penney at River Oaks Center has been spared from a previously announced closure as the troubled retailer works through a Chapter 11 bankruptcy.

Stock + Field, formerly known as Big R, filed for bankruptcy and is closing all its stores, including its Michigan City location.

The South Bend Chocolate Company closed down The Chocolate Cafe in downtown Valparaiso as a result of the financial effects of the coronavirus pandemic. It had been a popular spot for sweets, confections and coffee for two decades.

Big changes could be in store for the Southlake Mall if Pacific Retail Capital Partners remains in control.

"It is possible that over the summer traditional bring-and-mortar retail could gain a sense of novelty that it hasn’t had since the original rise of the department store."

Macy's at the Southlake Mall set up a cowboy experience for six-year-old Bryce Lakin, who suffers from congenital heart disease.

A Macy's store in New York City is shown.

The Macy's at River Oaks in Calumet City is shown.