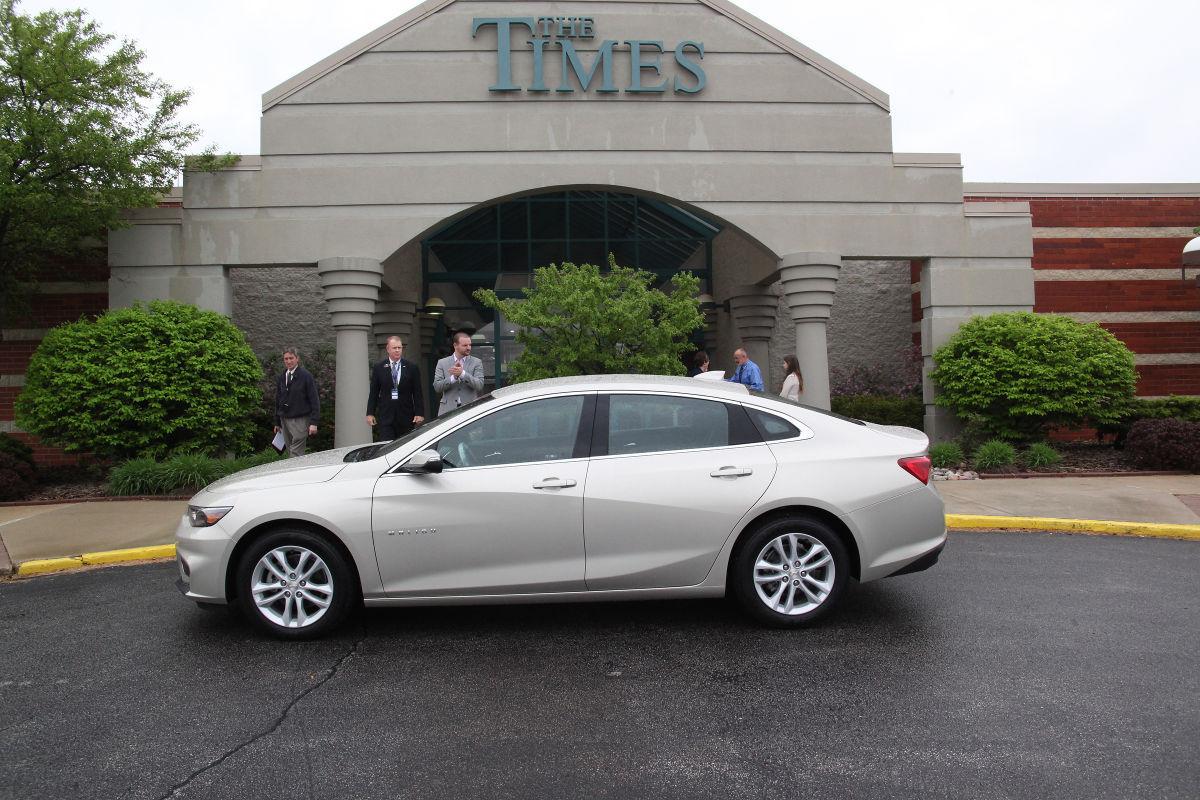 Shown is the Chevy Malibu given away in the 2016 Win a Chevy Malibu Sweepstakes put on by The Times Media Co. and Northwest Indiana Chevrolet Dealers. 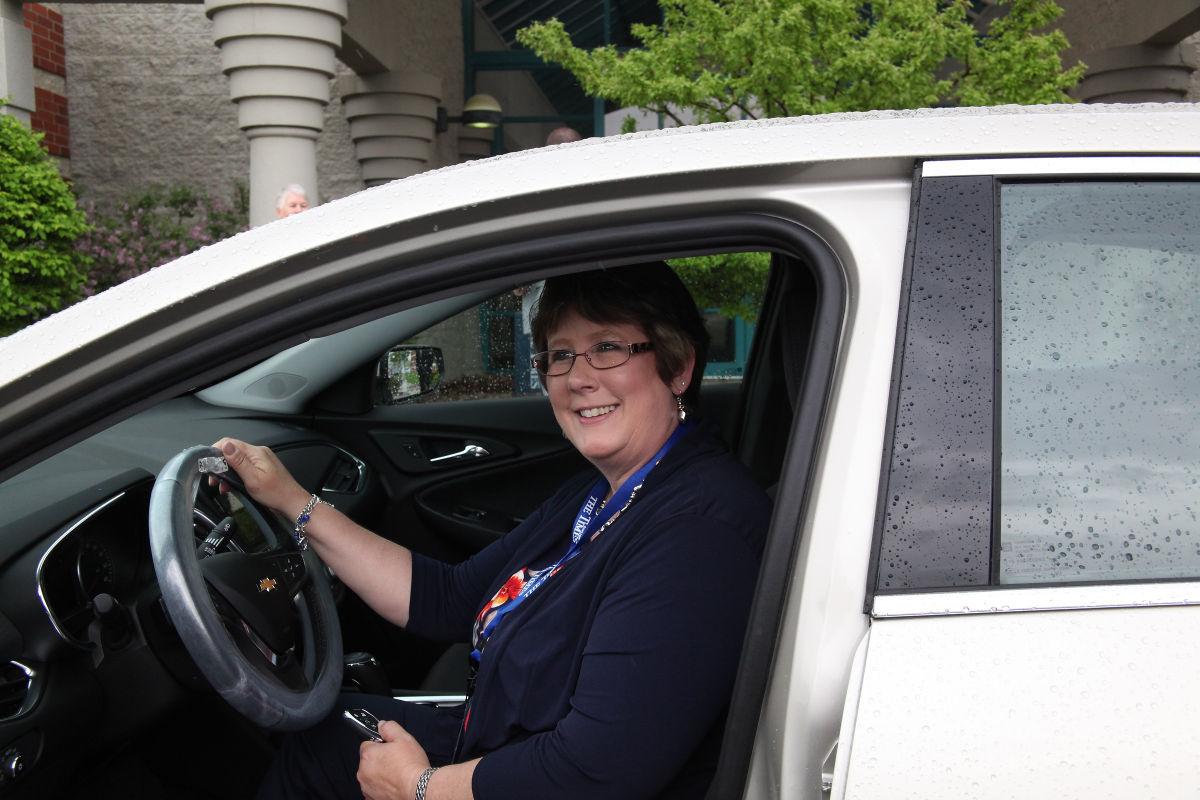 You could be driving a brand new 2017 Chevrolet Malibu — for free.

All you have to do is fill out this short entry form.

The Times Media Co. and Northwest Indiana Chevrolet Dealers are partnering to bring back the annual car giveaway for the eighth year. The Win a 2017 Malibu contest starts Sunday and goes through May 6. Entrants could win the popular mid-sized family sedan or one of eight sets of Chicago Blackhawks tickets.

“We are extremely excited to partner with the Northwest Indiana Chevrolet Dealers to give one lucky Times or nwi.com reader an all-new 2017 Chevrolet Malibu," Times Media Co. Vice President of Sales and Marketing Joe Battistoni said. "As we continue to see huge growth in mobile, social and video audience we are looking forward to more entries than ever before. "

"There are no strings to enter," she said. "You can enter electronically or clip out the form in the paper, fill it out and take it to whichever Chevy dealership you want."

Chevy has been the top-selling brand in Northwest Indiana and greater Chicagoland for six straight years, and it's revving for a seventh, Roper said.

"I think it's really popular because it's a perfect blend of functionary and good-looking vehicles that are eye-catching and have pizzazz while being quite affordable," she said.

The Malibu is one of Chevy's most popular sedans. The midsized family car gets up to 27 miles per gallon in the city and 36 mpg on the highway, and has a turbocharged four-cylinder engine that has up to 250 horsepower.

"Obviously last year, the Malibu has a redesign," Roper said. "It's bright, fresh and eye-catching. It's got LED lamps, wifi, Bluetooth. It's the perfect vehicle for everybody at every stage of life, whether you have a family, are retired, or are just starting out in your job."

More contest entry information is available in an ad in today's Times or online at nwi.com/malibu.

Auto mechanics across the Chicago area, including many just across the border in the south suburbs, have returned to work after a nearly seven…

Lexus of Merrillville honored as elite

The Lexus of Merrillville was one of only 168 Lexus dealerships nationwide to be honored as the Elite of Lexus.

Harbor Buick GMC closing in Portage after sale of property

After more than 20 years, Harbor Buick GMC is closing its Portage location at 6100 U.S. 6 after selling the property and consolidating its bus…

MUNSTER — In sweltering heat, Lolita Whitehead and her daughter rode their bikes Wednesday from their Gary home to The Times of Northwest Indi…

Is your dog the best? Prove it

Everybody believes their dog is the best — after all, he's such a good doggy, such a good boy.

You could be one of the first people in Northwest Indiana to drive a new 2015 Chevrolet Trax compact sport utility vehicle.

For nearly 100 years, Smith Chevrolet Hammond has been offering quality vehicles and excellent customer service to its customers.

Malibu winner has Chevy in her blood

Nancy Riley was standing in the middle of a home improvement store when her cellphone rang and she got the news she had won a 2016 Chevy Malibu.

Tanya Farley of Valparaiso was getting her oil changed at Team Chevrolet in Valparaiso when she entered the 2016 Win a Chevy Malibu Sweepstakes.

Employees of Wiers Chevrolet DeMotte believe giving back to the community isimportant. They have sponsored youth teams and are sponsors of Kan…

When Jon Johnson of Cedar Lake walked into the Christenson Chevrolet dealership in Highland recently, he only wanted to browse the selection of cars.

Valparaiso resident Tom Sarafin has purchased so many vehicles from Smith Chevrolet in Lowell, he has lost count.

Pastor Tim Wanless knows after 22 years of marriage that there are some things a wife doesn't tell her husband.

Adam Gutjahr has been a fan of the Chicago Blackhawks for two decades, but had never been to see a game until he won a pair of tickets from th…

Mary Gnat of Chesterton is a fan of Chicago sports, and was happy to win Chicago Blackhawks tickets from the Harbor Chevrolet dealership recently.

Shown is the Chevy Malibu given away in the 2016 Win a Chevy Malibu Sweepstakes put on by The Times Media Co. and Northwest Indiana Chevrolet Dealers.