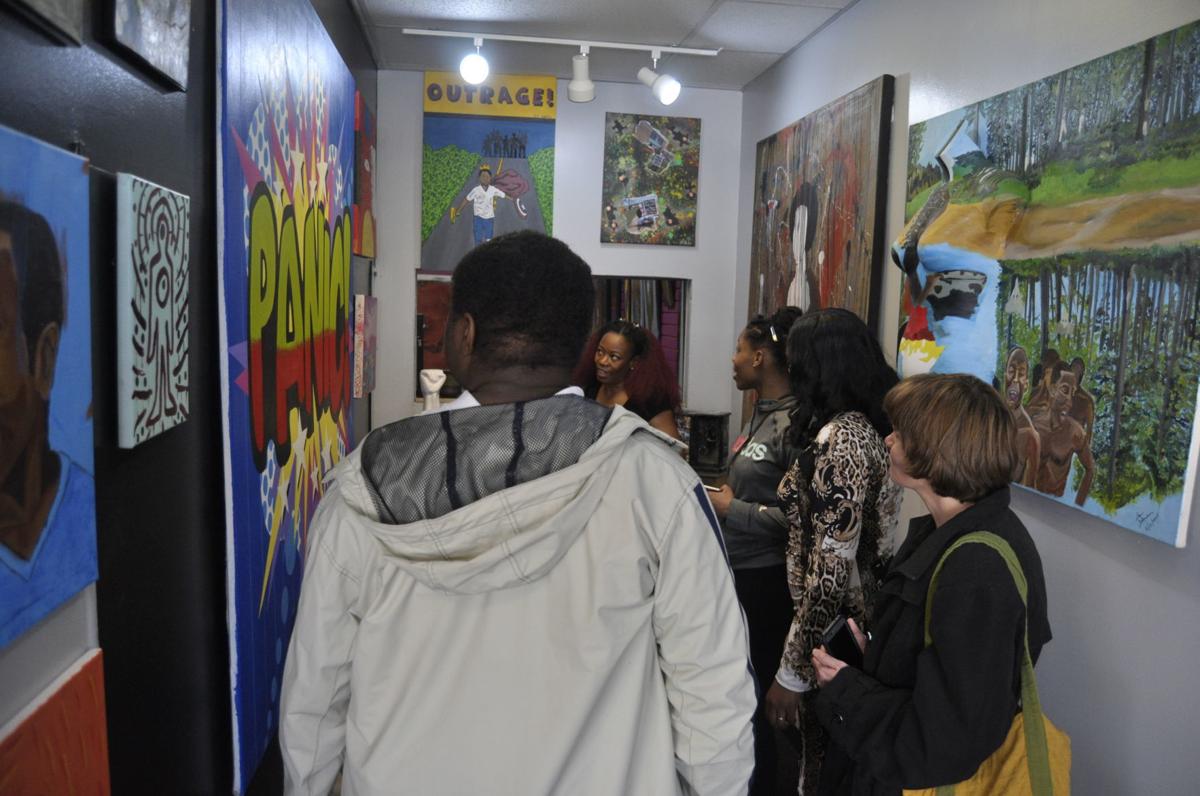 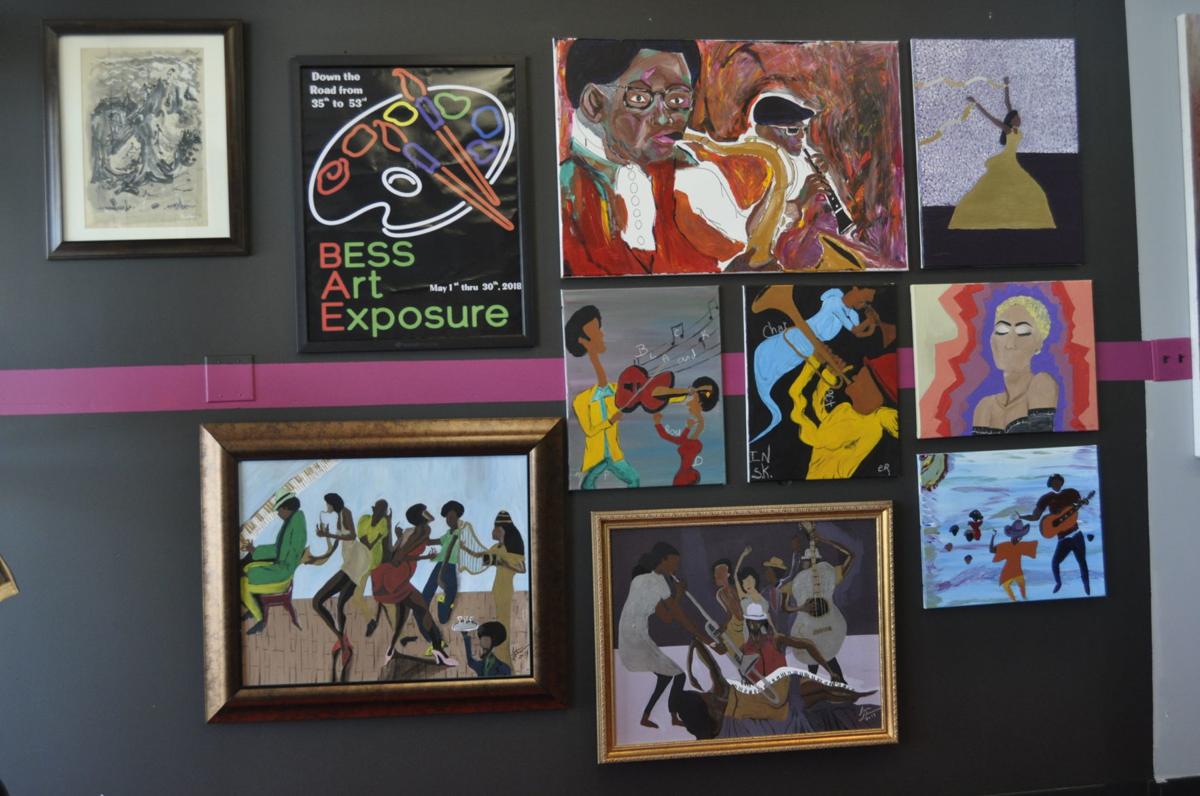 A local artist has opened a new gallery in a Merrillville strip mall just south of the border with Gary's Glen Park neighborhood.

More than 100 works ranging from $50 to more than $20,000 are being sold out of a former Boost Mobile store at 5386 Broadway. Owner Jesse Johnson started BESS Art Exposure in the hope of giving fellow local artists more exposure.

The former radio and television newsman, a Chicago native who studied fine arts at Indiana University Northwest, is an Ivy Tech professor, pastor at a Gary church and an artist himself.

"I've been doing art all my life, since I was 7," he said. "I do sculpture, oil paintings, including humongous works, photography. I write poetry, produce music, engage in the culinary arts. I do it all."

He's displayed his work — which often deals with issues of racial injustice and his Chicago upbringing — at a number of galleries, including the Live Arts Studio in Gary, the Fox Gallery in New Chicago and the Uri-Eichen Gallery in Chicago's Pilsen neighborhood.

"I've been working on a gallery to bring art to the local community," he said. "We want to be able to create a platform for artists to get them as much exposure as we can."

The gallery sells paintings, sculptures, ceramics and other multi-media works, and will regularly host live performance art and poetry.

The first exhibit is "Down the Road from 35th to 53rd," which features many artists from Indiana University Northwest about 18 blocks north on Broadway. Group and solo exhibitions will frequently rotate through the space so there's always new art to see or purchase.

The gallery strives to represent people from different backgrounds and cultures, Johnson said.

Georgia Fox Hatfield, who owns the Fox Gallery, said the addition of BESS Art Exposure will mean more diversity and inclusion in the Northwest Indiana art scene, which includes local galleries like including Lake Street Gallery and Painted Board Studio in Gary, SideCar and Paul Henry's Art Gallery and the CHESS Gallery in Hammond, Promise You Art House and One Best Life at Tinker's Attic in Highland, and the newly opened Ula Art Gallery in Crown Point.

"It's a positive feature for our Region," she said.

BESS Art Exposure is open from 11 a.m. to 7 p.m. Monday through Saturday.

For more information, call 219-318-3816, visit bessartexposure.com or find the gallery on Facebook.

12 things to do in Northwest Indiana this week

Spring Into the Arts

Mother's Day Painting in the Garden

Cartographers of the human mind will unveil their psychological mapmaking in an upcoming exhibit at Paul Henry’s Art Gallery in downtown Hammond.

The new BESS Art Exposure gallery in Merrillville is going big with its new "Go Big or Go Home" exhibit.

BESS Art Exposure is planning a number of new exhibits featuring local artists this summer, and you'll only have a short two-week window to se…

A stock car soars up a ramp into a trailer and explodes into a giant fireball. A fire hydrant is sprayed into someone's face while a group of …

Local artist Jesse Johnson will showcase his work at his BESS Art Exposure gallery at 5386 Broadway in Merrillville through Friday.

Are robots coming for your job?

Paul Henry's Art Gallery in downtown Hammond is exhibiting "The Crowd," a collection of portraits and caricatures by veteran commercial artist…

Ivy Tech Community College will host its first career fair for students and the general public on Nov. 9.

A longtime painter and artist from Matteson, Illinois who did street portraiture in one of New Orleans' busiest tourist districts is exhibitin…

Artist to give talk at SideCar Gallery in Hammond

Northwest Indiana-based artist Ben Murray will discuss his work Saturday at the SideCar Gallery at 411 Huehn in Hammond.

Hammond's SideCar Gallery, which promises "contemporary art @ 78 mph," plans to screen a series of short films in conjunction with the closing…

Promise You Art House in downtown Highland is displaying the work of Jack Piening in "Flowers and Bombs: An Honest American Retrospective"

The BESS Art Exposure gallery in Merrillville will close after about a year, at least for now, after a final book signing event Saturday.

Valparaiso University’s Brauer Museum of Art will put the work of students and professors on display this spring.

The pattern has played out time and time again in cities across the country: Artists start moving into a distressed, rundown neighborhood, ope…

8585 Broadway in Merrillville, the tallest multitenant office tower in Northwest Indiana, has opened an art gallery in its lobby as part of a …

Sidecar Gallery in Hammond teamed up with Slow Gallery in Chicago to stage the new group exhibit.

A new coordinator has taken over Purdue University Northwest's CHESS Gallery, which relocated from Hessville to 7011 Indianapolis Blvd. in Hammond.