Local government taxing districts that include Southlake Mall likely will have to pay millions of dollars in refunds to the mall's owners after a long-running property tax assessment dispute was resolved Wednesday in the mall's favor.

The exact amount of the refunds to be paid by Lake County, Hobart, and the other taxing units due to the overassessment is not yet known.

But a former attorney for the Lake County Commissioners previously estimated the county alone may be on the hook to return as much as $12 million in property taxes paid by the mall during those years.

According to court records, mall owner Southlake Indiana LLC objected to the Ross Township assessor more than doubling the assessed value of the mall property at U.S. 30 and Mississippi Street that contains some 1.3 million square feet of retail space, a 12-screen AMC movie theater, and several restaurants.

The case eventually landed at the Indiana Board of Tax Review. Records show the board was unable to say whether the mall appraisal provided by the assessor or the valuation offered by the mall's appraiser was correct.

To resolve the issue, the Board of Tax Review created its own valuation for the mall for the four tax years at issue that was closer to what the assessor said the mall was worth than what mall officials believed the property was worth.

The appellate-level Indiana Tax Court affirmed the board's valuation of the mall, except for two minor issues, in December.

The Supreme Court, however, said both the tax review board and the tax court overstepped their bounds by independently devising and affirming a value for the mall, according to the ruling written by Justice Geoffrey Slaughter, a Crown Point native.

Slaughter said Indiana statutes clearly require the tax board, when a challenged valuation is 5% greater than the previous valuation, to accept as correct either the assessor's appraisal of a property or the property owner's appraisal — otherwise the valuation must revert to the previous assessment.

He said there's no statutory authority for the tax board to create its own assessment, as it did in this case, if it finds deficiencies in each of the provided appraisals.

Likewise, the tax court should not have affirmed the board's actions, Slaughter said.

"We apply the statute as written and do not second guess the Legislature's decision to limit the state board's flexibility when assessed values increase by more than the 5% percent threshold," Slaughter said.

"By failing to apply the reversionary clause, the tax court erred as a matter of law."

"The assessor provided substantial evidence of the value of the property — an appraisal and a sale — which we believed supported the assessments issued by the Ross Township assessor," Cusimano said.

He pointed out the court-ordered reversion to the 2010 valuation reduces the value of the property to below even what the mall's appraiser calculated the mall was worth for the 2013 and 2014 tax years.

"In the coming months, we hope the Indiana Legislature will revisit the provisions of the statute so it is no longer applied in this way," Cusimano said.

"The court's ruling vindicates the taxpayer protections wisely enacted by the General Assembly to prevent assessors from doing exactly what the assessor did in this case: substantially increasing Southlake's assessment without being able to prove that the increase was correct," Suess said.

"Our client looks forward to working with Lake County to promptly resolve all remaining assessment disputes."

Records show Southlake Mall recently was foreclosed on in Israel after its former owner, Starwood, refinanced its mall portfolio in 2018 and then defaulted last year due to the COVID-19 pandemic. 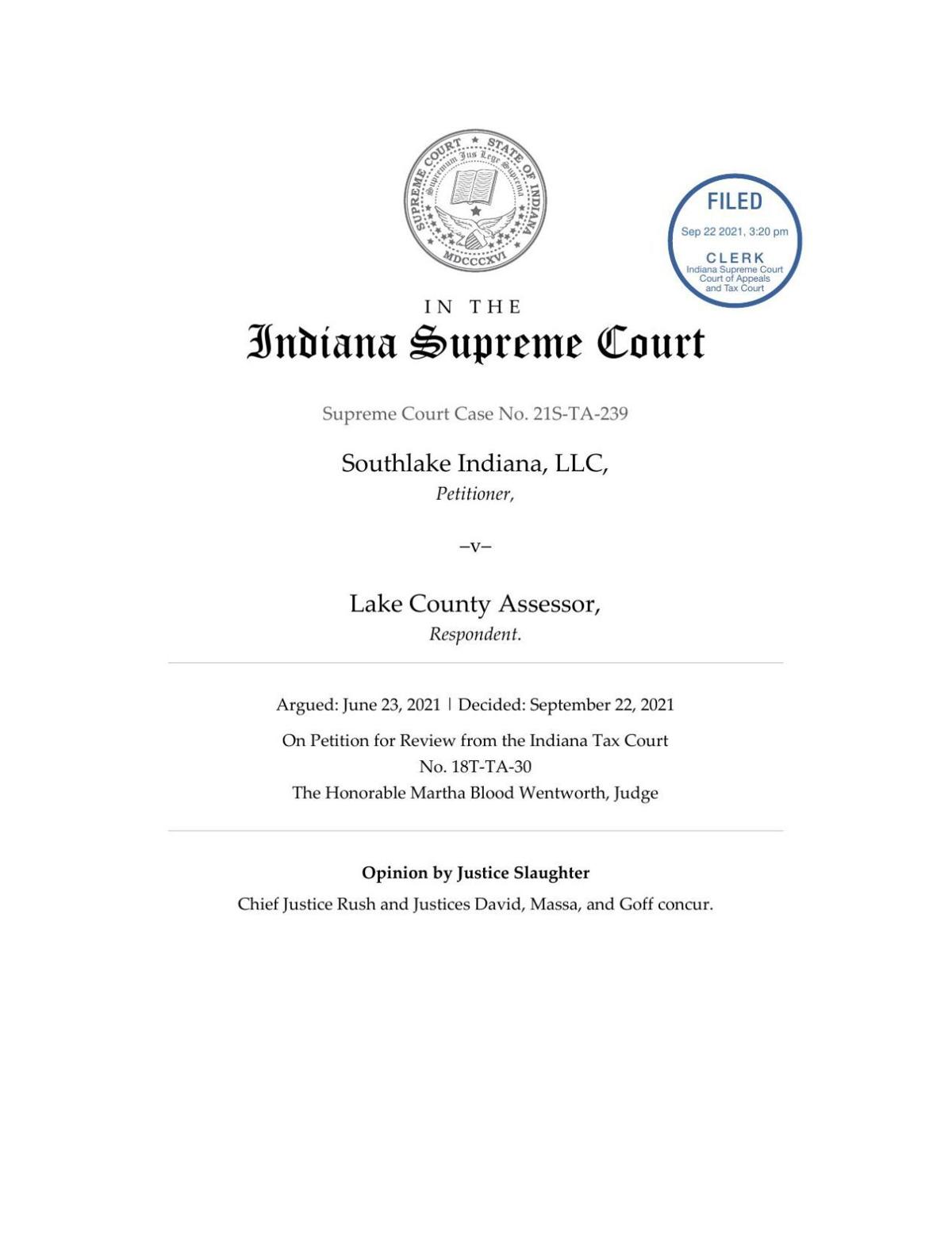 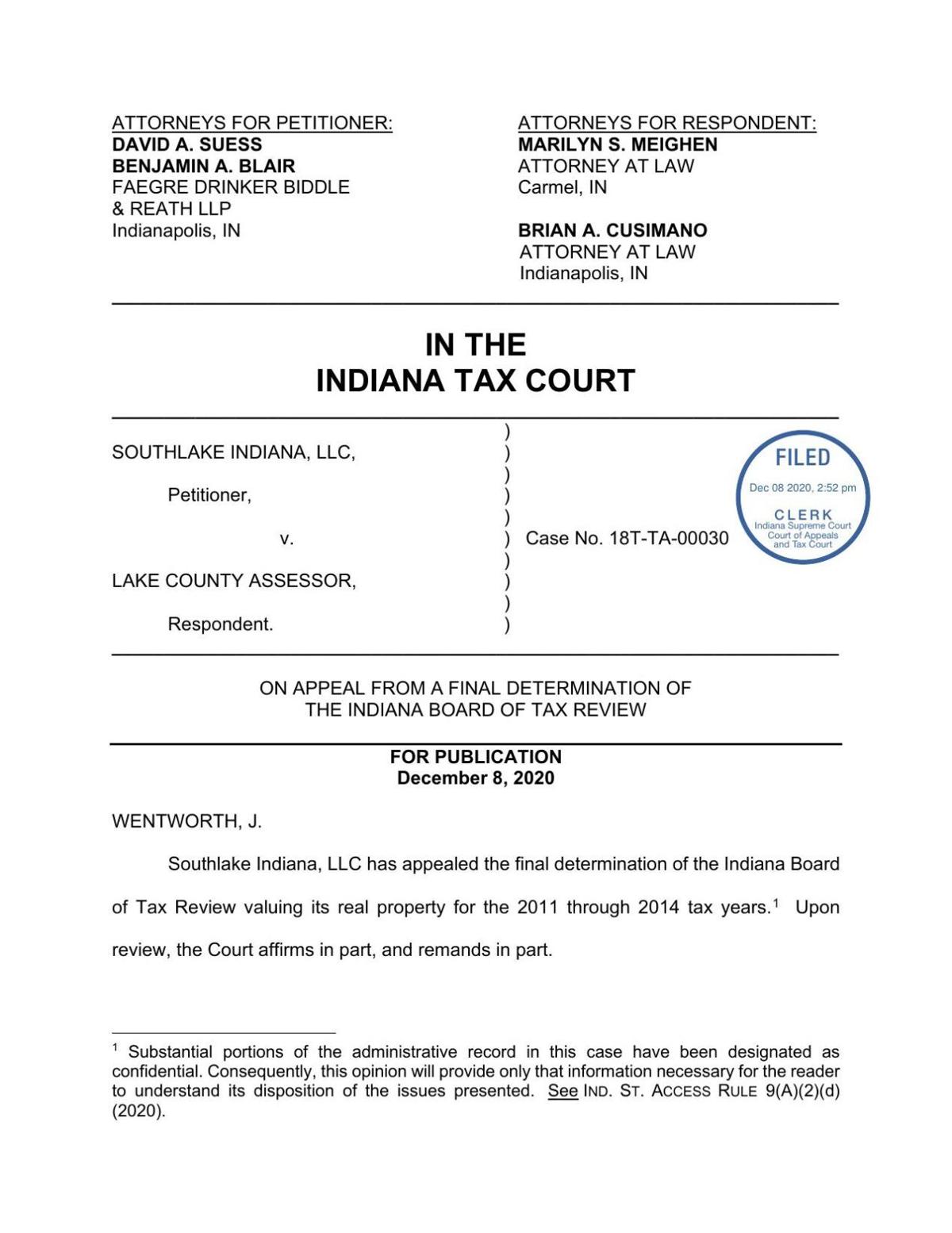 The Indiana Supreme Court heard oral arguments Wednesday in a long-running dispute over the assessed value of Southlake Mall.

Hobart and Lake County may be on the hook for more than $12 million in refunds depending on how the Indiana Supreme Court resolves a long-running dispute over the assessed value of Southlake Mall.

A judge has upheld the Indiana tax board's calculated assessed value for the 2011-14 period, which was closer to the value set by the Lake County Assessor than the value sought by the mall.

The Indiana Tax Court has ordered the assessed value of the Kohl's store adjacent to Southlake Mall be recalculated.