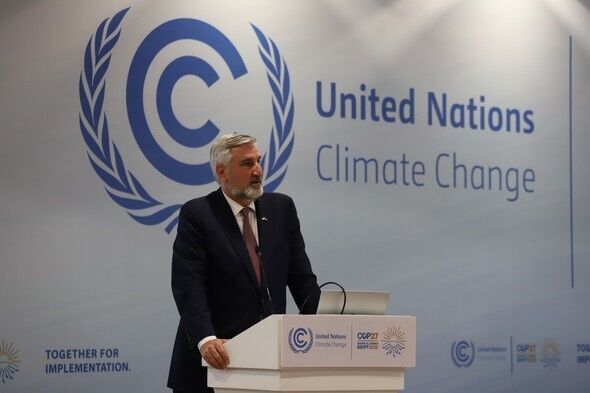 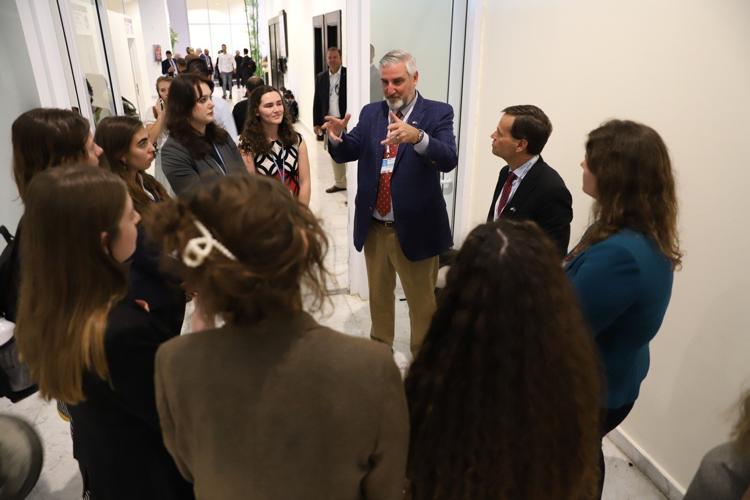 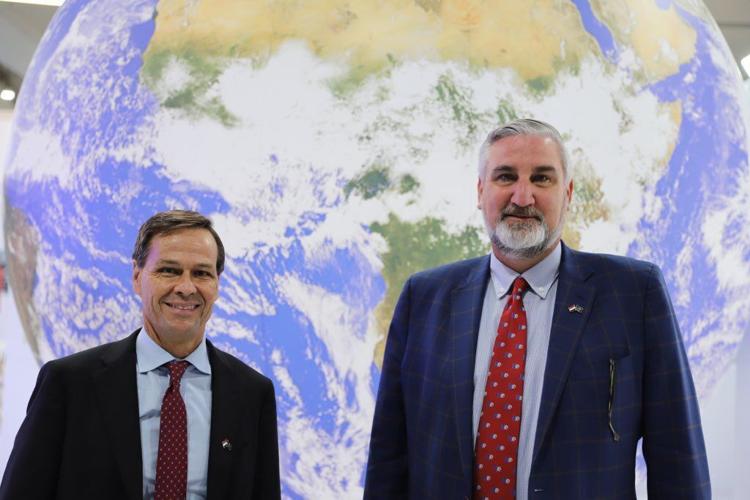 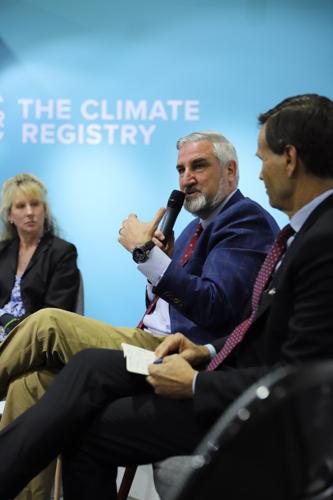 Indiana isn't giving up on the industries that make it a top worldwide producer of steel, fuels, manufactured goods and agricultural products.

Instead, Indiana is committed to applying innovation to ensure its industries, and the state as a whole, continue growing in a sustainable manner.

"My vision, Indiana's vision, is a world where things continue to grow," Holcomb said. "My vision is a world where no nation is held hostage to the whims of one (energy) source, or one man, or supply chain pain disruptions, where options prevail and empower and can be dialed up or down accordingly."

The governor acknowledged Indiana has a lot at stake as more businesses prioritize emissions reduction because much of what Indiana makes uses a lot of energy and generates a lot of pollution, ranging from Northwest Indiana's steel mills to race cars speeding around the Indianapolis Motor Speedway at more than 200 miles per hour.

At the same time, Holcomb pointed out the world needs what Indiana makes now more than ever. So it's incumbent upon Indiana to adapt to the market and to work with producers to adjust to a world where net zero emissions are a widely embraced goal — and that work already is underway, he said.

"You cannot build new, or rebuild old, crumbling roads or bridges, or massive buildings for that matter in rich or poor counties, you can't build most electric vehicles, or wind turbines, or solar arrays without that steel that we produce in Indiana. But we're now producing that steel in Indiana more and more sustainably," Holcomb said.

The governor noted that Cleveland-Cliffs, which operates Region steel mills in East Chicago and Burns Harbor, is transitioning its primary fuel to natural gas from pulverized coal and "making its blast furnaces the most efficient in the world by producing its steel with 70% lower carbon emissions than imported steel."

"They're not giving up on steel. Instead, they're producing steel more sustainably than ever before," Holcomb said.

Similarly, Holcomb said BP is working toward developing a hydrogen energy hub at its Whiting oil refinery, and Fulcrum BioEnergy is developing a plant in Gary to turn municipal solid waste into aviation fuel.

"We don't want to just be part of this great energy transition, we want to lead it. And we find ourselves in a very unique patch of property in the world to be credible in doing just that, to lead," Holcomb said.

For example, Holcomb said Indiana utilities have reduced the role of coal in the state's energy mix from 83% in 2010 to under 50%, due in part to the availability of cheaper natural gas and other alternative energy sources, such as solar and wind.

Holcomb said Indiana now ranks fourth in the country, behind much larger states like California and Texas, for clean energy capacity under construction, including Doral Renewables' 1.3 gigawatts Mammoth Solar Farm under construction across 13,000 acres in Starke and Pulaski counties in rural Northwest Indiana.

He explained Indiana businesses also are investing in hydrogen fuel cells and small modular nuclear reactors that could play a role in meeting the state's future energy needs.

"We can deliver, and are delivering, cleaner energy with lower emissions, and therefore much less impact on our shared environment," Holcomb said.

"Indeed, Indiana may be a subnational player in the parlance of global conferences, but I will stack our record up against anyone in the world in the clean energy transition space that has a similar agriculture and manufacturing footprint," he added.

To that end, he said the state is working to maximize resources provided by the federal government and partnering with industry to support research and development initiatives, worker skills training and infrastructure investments.

"We're not walking away from manufacturing and agriculture to somehow change the focus of our economy. Far from giving up on those necessities, we're determined to deliver more steel and other essential components, more advanced manufactured goods, and certainly more protein and healthy calories for the people throughout the world who are in desperate need of them," Holcomb said.

"We don't need to constrain humanity to save it. Just the opposite. We need to unleash our collaboration, our creativity and our invention. You have my pledge until my last day in office to do exactly that in Indiana," he said.

That message was heartily applauded by participants attending the climate change conference in Egypt. Back home in Indiana, Republican former Congressman and 2000 gubernatorial nominee David McIntosh, president of the conservative Club for Growth political action committee, condemned it.

Writing in the Indianapolis Star, McIntosh warned: "The woke programs coming out of the UN’s COP27 will have oversized and long-term devastating impact on Indiana."

"While their supposedly conservative governor jets off to join the liberal elite in their efforts to further destroy the American economy, at a conference designed to squeeze them even harder at the pump, in their homes and on their farms, Hoosiers are left to deal with record high and rapidly rising gas prices," McIntosh said.

Similar sentiments have been expressed by some Republican members of the Indiana General Assembly who considered approving legislation in February that would have prohibited the state from contracting with any company seeking to reduce its fossil fuel use, or any business that does business with those companies.

“These woke big businesses are collaborating with their leftist allies to subvert the will of the people, including by investing Hoosiers’ hard-earned money in ways that work against the best interests of Indiana families,” Rokita said.

In response, Ball State University economics professor Michael Hicks on Friday described the attacks on Holcomb's commitment to innovation as means of reducing emissions as "somewhere between churlish and childish."

"It is impossible to ignore the growing concern about climate change, even if you think it overwrought and subject of scientific misconduct. The plain fact is that shareholders and governments around the globe are pushing for changes to policy and business decisions," Hicks said.

"You can ignore them, and stand outside the tent and yell at those folks. That is the approach of the Club For Growth. It might well be a fine tactic for them, that's well outside my expertise. But that would be an absolutely moronic approach for a governor," he added.

Hicks said Indiana historically has produced a small amount of energy through coal and used enormous amounts of energy for manufacturing.

He said embracing alternative energy through wind, solar and whatever else comes along offers huge benefits to the state, such as better use of dormant agricultural areas and reducing the inefficiency of concentrated production, with minimal impact on Indiana's tiny coal mining industry.

"All new economic activity of scale, in any industry, will seek energy from renewable sources. States that have an abundance of that will be better able to attract and retain those businesses. In the long run, renewables will cut everyone's energy costs," Hicks said.

Gallery: Get to know the state symbols of Indiana

State Song: "On the Banks of the Wabash, Far Away"

WATCH NOW: Riding shotgun with Hobart PD - "This is my daily office"

“Wow, man. What a scene. You can’t make up what we see out here on any given day,” Hobart patrol officer Tommie Tatum said.

The Republican chief executive is in northeast Africa this week to speak on Indiana's efforts to transition to clean-energy infrastructure.

"The state has a valid and compelling interest in protecting unborn children who are, at the very least, from the moment of conception a living being and potential human life," Rokita said.

"I look forward to presenting a long list of practical and pragmatic steps that have occurred in the state of Indiana in terms of increasing alternative energy supply," Gov. Holcomb said.

A little bit of Hohman, also known as Hammond, was on display at the Governor's Residence for Halloween this year.

Hoosiers will pay a total of 74.5 cents in taxes, including 56.1 cents in state taxes, for every gallon of gasoline they purchase in November — the fourth-highest rate in Indiana history.

Abortion will remain available in Indiana as if the near-total abortion ban was not enacted at least until the Supreme Court issues its final decision sometime in 2023.

"Hoosier seniors and veterans are especially on my mind when it comes to the reclassification of cannabis," said Democratic U.S. Senate nominee Thomas McDermott Jr.

"There are 16 other regions in our state that are sleeping with one eye open because of what you're accomplishing here," said Gov. Eric Holcomb.

A Merrillville man severely injured in an Oct. 24 crash on Interstate 80/94 in Hammond, and hospitalized ever since, has died.

Hoosiers who think they know someone perfect to serve in the Indiana National Guard can receive $1,000 for referring a successful enlistee.