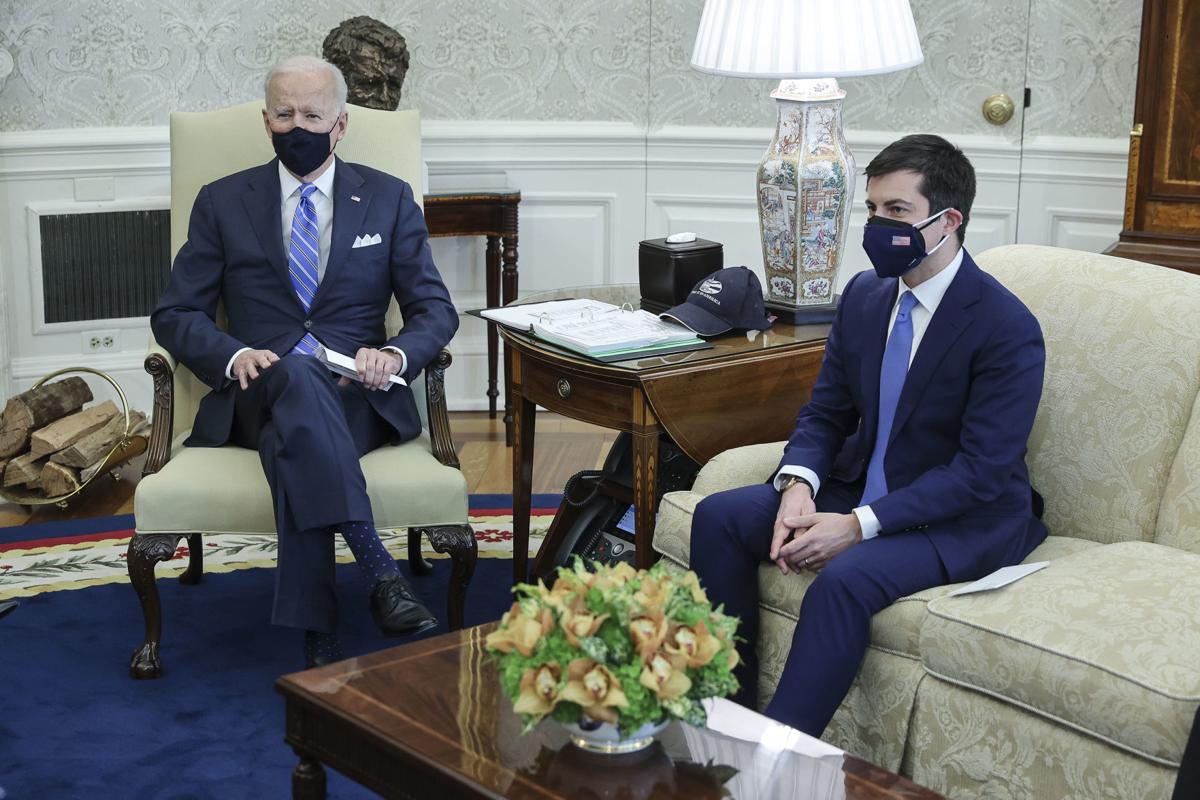 President Joe Biden and Transportation Secretary Pete Buttigieg meet with a bipartisan group of House members on infrastructure March 4 at the White House. 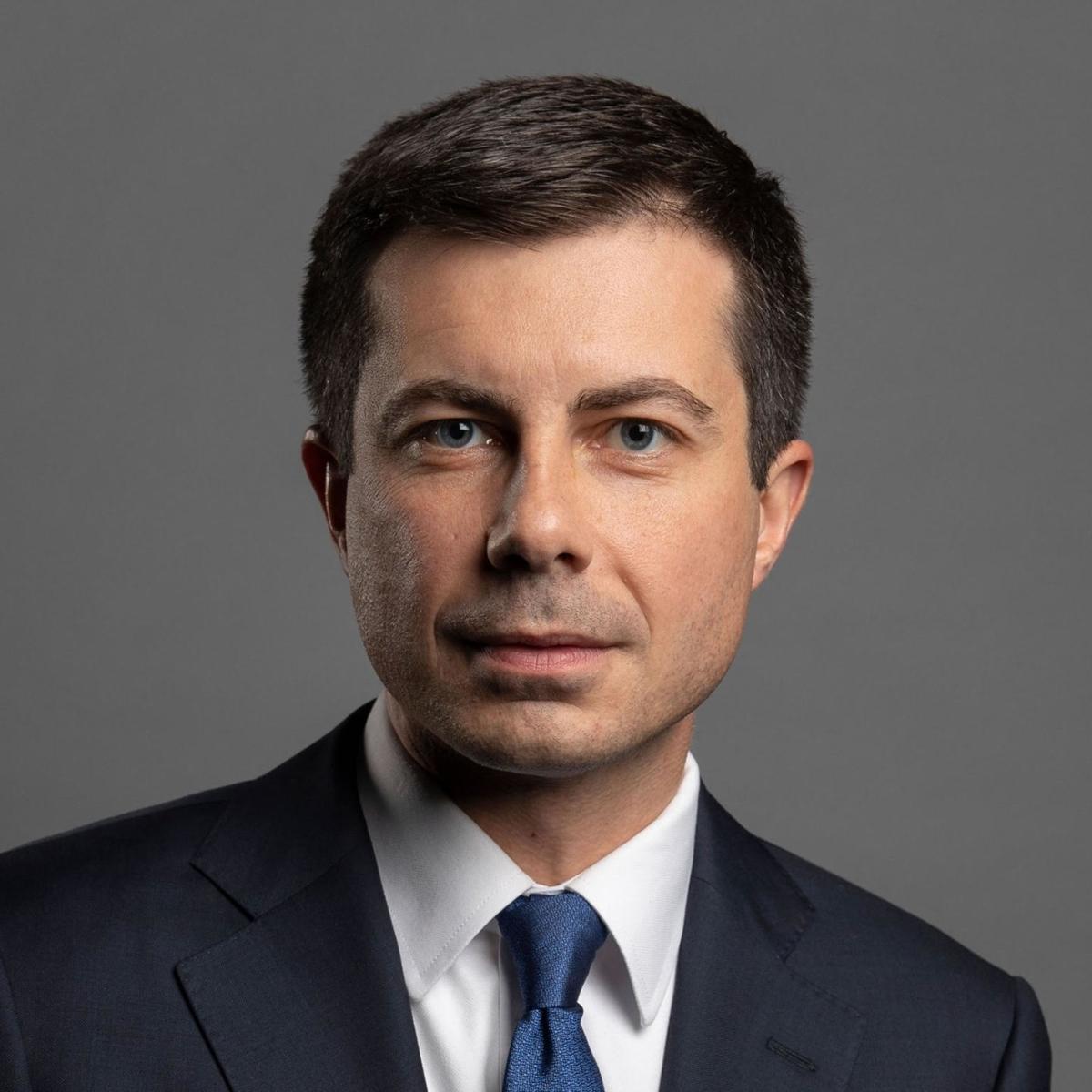 In an exclusive interview with The Times, the former South Bend mayor said the size of the infrastructure legislation, initially pegged at $2.3 trillion, could be finalized and approved in the not-too-distant future and immediately begin creating millions of American jobs.

"I'm convinced something big will happen," Buttigieg said. "Exactly what shape it's going to take, that's exactly what's in the middle of the sausage-making right now, and obviously the way Washington works that can have a lot of twists and turns."

"But I also think that story is going to play out, actually pretty quickly, over the coming days."

"If the American Jobs Plan passes we're talking about a dramatic increase in resources available to passenger rail across the country. Yes, that's things like Amtrak. But it's also intercity rail, and the South Shore is a great example of how important that is," Buttigieg said.

"Not only is it a lifeline that is important to maintain for residents in the Region. But the prospects of expanding it, or enhancing it, could dramatically improve the economic prospects of the different communities that are served."

Buttigieg said he knows from personal experience the frustration of having to explain to foreign visitors in South Bend that it'll take two hours or more to cover the 90 or so miles to Chicago by rail; a distance he said takes far less time in most foreign countries.

"That's a consequence of us deciding that it's OK to underinvest," Buttigieg said. "We can't just keep settling for less resources than people in lots of other countries take for granted."

He said the American Jobs Plan will remedy that and help alleviate the financial burden on states and local governments that have been doing what they can to maintain and expand rail service in the absence of strong federal support.

"Train operators, from NICTD to Amtrak, have done a heroic job with the dollars they've had access to," said Buttigieg, referring to the Northern Indiana Commuter Transportation District that operates the South Shore Line.

"And communities have been willing to step up, like we stepped up in St. Joe County and a lot of others, to deliver funding. But communities shouldn't have to be alone in doing this, and that's part of what we have a chance to do something about."

The national transportation chief was noncommittal on the possibility the federal government will put additional money toward the West Lake expansion of the South Shore Line set to break ground this fall, or the Double Track project aimed at reducing commutes to Chicago from Michigan City to about an hour.

But he said Biden's federal budget proposal will contain a passenger rail grant program aimed at improving the operations of commuter rail and similar services across the country.

"A lot of it could go to Amtrak. But it's not only for Amtrak, it's for anyone doing passenger rail. The South Shore would certainly be an example of that," Buttigieg said. "If I had my way, every good train in the country would be getting a boost."

"The whole idea is to make sure that we're getting more dollars out, so the great visions that local and regional leaders have can be delivered sooner than if we're not willing to make those investments."

Congressional Republicans, including Indiana U.S. Sens. Todd Young and Mike Braun, so far have balked at the broad scope of what Biden considers infrastructure. They do, however, seem to be on board with greater federal investment in roads, bridges and rail.

Buttigieg said he hopes the Hoosier senators ultimately will come to see the importance of the entire American Jobs Plan to the state of Indiana.

"I recognize there are a lot of different views, especially on how to pay for it. The president understands that. But we really need to get something done here," Buttigieg said. "This has tons of support from the American people."

'Mayor Pete' urging Region residents to get vaccinated against COVID-19

"We're really emphasizing the opportunity right now to get everyone vaccinated," said U.S. Transportation Secretary Pete Buttigieg. "It's just a whole of government effort to make sure that we're getting everybody."

A bid opening early this month revealed a proposal to perform the railroad, bridge and train station work for about $400 million, far exceeding engineers' estimates that anticipated a price of about $228 million.

The U.S. Department of Transportation announced Monday that NICTD would receive about $24.6 million for the Double Track project, and just under $44 million for the West Lake project.

WASHINGTON — When President Barack Obama outlined plans to overhaul the nation’s infrastructure, Republicans blocked them. President Donald Trump declared it to be “infrastructure week” so often that the phrase became a running joke, yet he failed to follow through with legislation.

If you’re wondering what Mayor Pete, aka Pete Buttigieg, the former two term mayor of South Bend, has been doing since he dropped his bid for …

"The Endless Frontier Act is about using (China's) challenge to become a better version of ourselves through investment in innovation," said U.S. Sen. Todd Young, R-Ind.

The Indiana Supreme Court has agreed to review the unique legal status of the entity that operates the South Shore commuter rail line linking Northwest Indiana to Chicago.

Just Transition NWI, an environmental activists group, is hosting an outdoor screening of the "In the Water" documentary this weekend.

U.S. Rep. Frank J. Mrvan is taking his pitch for the American Jobs Plan directly to the Northwest Indiana union workers who stand to benefit most from the federal infrastructure program.

Since 2017, the Midwest Rail Rangers have been giving free public talks about Chicago trivia, the Region's steel mills, the scenic Indiana Dunes and the agriculture in LaPorte and St. Joseph counties.

The Digital Crossroad Fiber Network along the Indiana Toll Road is being hailed as a "transformative" expansion of broadband that could boost economic development, increase internet speeds and expand high-speed internet across Northern Indiana.

President Joe Biden and Transportation Secretary Pete Buttigieg meet with a bipartisan group of House members on infrastructure March 4 at the White House.