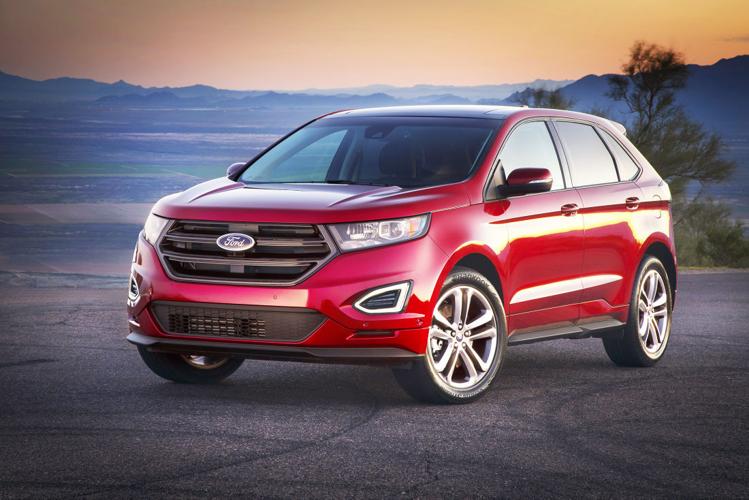 The Ford Edge gets a clean-slate design for 2015, giving it a fresh look and long list of tech features. A forward-facing video camera and the ability to automatically guide you into parking spots are among the headline additions 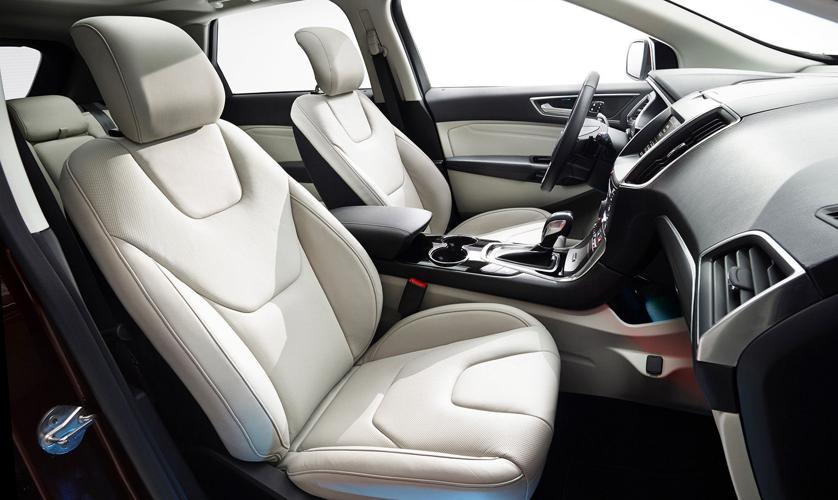 The Edge’s cabin is more refined and sophisticated for 2015, with the goal of feeling like a relaxing, comfortable sanctuary from busy life.

Like the original iPhone, the Ford Edge was introduced in 2007, which means it was a banner year for rectangles with rounded corners.

Not only did the curvy-but-still-boxy Edge make a huge styling statement with its Ivory Soap shape, but it also introduced new technologies and refinements to the mid-size crossover segment.

And now Ford is doing it all over again.

The Edge gets a completely new design for 2015 that still stands out — although perhaps without as much revolutionary fervor as the original — all while raising the bar for crossover tech once again.

How high did Ford raise it?

Fancy versions of the Edge can virtually park themselves into parallel and perpendicular parking spots. The parallel-parking magic has been done before, but the ability to help you back into a perpendicular spot is brand new. Ford hasn’t even rolled out that feature on its Lincoln luxury division yet.

The new Edge also is available with a forward-looking camera to keep you from accidentally rolling over something in front of you, for example. And if that’s not cool enough, Ford added a robot-like washer nozzle to keep the lens squeaky clean.

A long list of improvements are executed beautifully on the new Edge — as they have to be in this hotly competitive slice of the car world — with only two exceptions.

One, the designers were a bit too liberal with their use of hard plastics on the center stack, which is a no-no in today’s soft-touch world.

And two, the best engine in the lineup isn’t available on the luxury trim level, which seems odd to me. The 2.7-liter, twin-turbocharged EcoBoost V6 is exclusive to the firm-riding Sport model, and while its output of 300-plus horsepower feels and sounds spectacular, I wish it were an option on the dolled-up, smooth-riding Titanium trim.

For now, you can still get Ford’s tried-and-true, 3.5-liter, normally aspirated V6 in the Edge, along with a new twin-scroll, 2.0-liter EcoBoost four-cylinder engine, which is a better choice for its mix of power and fuel economy.

The fresh interior is meant to be relaxing and refined — a “sanctuary,” Ford’s chief interior designer calls it — and it succeeds for the most part. The construction quality all feels tight and precise, and I like the level of attention to detail that was paid to the back seats. The second row feels less like an afterthought, with nicely sculpted armrests and some snazzy trim pieces.

Exterior styling is almost Lexus-like, especially on the back end where lots of functional scoops and aerodynamic features come together in a culmination of creases and high drama. Like its ancestor, it stands out from a pack of lookalike crossover vehicles without stepping over the edge into bizarro territory, which is a tough boundary to straddle.

Technology and style set it apart from its many strong competitors. Advanced safety features and electronic innovations make it seem like a cutting-edge crossover.

Two visions emerge for getting self-driving cars on road

Two competing visions could determine how you first experience a driverless car.

Google Inc. revealed Thursday that one of its self-driving car prototypes was involved in an injury accident for the first time.

Family Friendly: The redesigned 2015 Kia Sedona proves there’s some life in the old minivan after all

There was a time, back in the late 1980’s, when the minivan was the family vehicle of choice in America. Chrysler ignited the minivan explosio…

The exotic 4C is Alfa Romeo’s first car to sell as it re-enters the U.S. market this year. It’s made from carbon fiber, has wild Italian styli…

Small SUVs Poised to be Top Sellers This Year: Compact and practical, in another era they would simply be called station wagons

The Mazda CX-5’s sporty looks match its driving feel. It’s one of the most fun crossovers you can buy today

It’s tough to review new crossover vehicles because they’re all so alike and all so good.

Today’s drivers have become used to “turn-key” operations, as in turn the key, start the engine and drive off.

Is Your Car ‘Summerized?’ Here’s how to get your ride ready to survive the red-hot months ahead

True, harsh winter weather can be brutal on a car, but summer does a vehicle no favors, either.

Few Drivers Heeding Auto Recalls: Automakers are recalling a record number of cars for important safety related repairs, but more than half of owners are ignoring them

Cars That Can Go the Distance: True road warriors can run non-stop

8 Tips to Know Before You Tow: Gauging the weight your car is pulling

Your car or truck might have a hitch installed, but that doesn’t mean it’s sufficient to pull a sizeable boat or camper. Here’s how to determi…

Freshman Class of 2016: First look at an alluring array of never-before-seen vehicles headed to showrooms

Pint-Sized Honda is a Big Deal: Larger on the inside than it looks from the outside

Small crossover sport-utility vehicles are the hottest things going in the car business these days, with a spate of new subcompact models, lik…

Most every new-car ad that notes a vehicle’s estimated fuel economy bears a variation of the phrase, “your mileage may vary,” which has become…

Where to Find the ‘Hottest’ Cars: How to protect your ride no matter where you reside

And by ‘hot’ we mean stolen. Here’s where motorists face the highest car-theft rates and tips on avoiding car thieves

The Dangers of Driving With Dogs

Transporting a pet can be hazardous to one’s driving, especially if Fido or Fifi is not properly restrained

Taking away the car keys from an elderly relative not only means diminished freedom, a new study suggests the resulting distress can take a tr…

DETROIT (AP) — Fiat Chrysler is recalling more than 1.7 million trucks to fix problems with air bags and welds in the steering system.

This Old Car: Today’s cars are staying on the road longer than ever

Here’s how to wring the most miles out of your ride and keep it riding and looking good over the long haul.

Here Come the 2016 Crossovers: Bestselling rides on the road

Now the best-selling rides on the road, a bounty of new crossover SUVs are coming to market as roomier and more practical alternatives to both…

THE BIG COMMUTE: Where Motorists Spend the Most Time in Traffic

With more cars and trucks on the road, commuters are paying the price with increased travel times. Here’s where to find (or avoid) the worst g…

Those who still think gas prices are too high can find great deals on the most fuel-frugal used cars.

Most and Least Driver-Friendly States: Some treat motorists better than others

Some states treat its motorists better than others in terms of ownership costs, commute times and other factors

The Ford Edge gets a clean-slate design for 2015, giving it a fresh look and long list of tech features. A forward-facing video camera and the ability to automatically guide you into parking spots are among the headline additions

The Edge’s cabin is more refined and sophisticated for 2015, with the goal of feeling like a relaxing, comfortable sanctuary from busy life.