Hoosiers will pay 75.4 cents in taxes, including 57 cents in state taxes, for every gallon of gasoline they purchase in September.

The Indiana Department of Revenue this week announced the applied 7% sales tax on gasoline purchases will be 24 cents per gallon next month, down from 29.4 cents per gallon in August, due to the falling wholesale price of gasoline in Indiana and across the country.

As a result, Hoosier motorists next month will be paying the third-highest tax burden on gasoline purchases in state history — an amount exceeded only by July and August.

The Republican-controlled General Assembly did agree Aug. 5 in Senate Enrolled Act 2 to cap the applied sales tax rate on gasoline at 29.5 cents per gallon, a level it never has reached and likely never will unless gas prices soar to new record highs.

Statehouse Democrats attempted several times during the recently completed special legislative session to temporarily suspend the collection of Indiana's gasoline taxes and make up the lost revenue earmarked for road construction projects by using a portion of the $6.1 billion in the state's reserve accounts.

That policy, if enacted, would have immediately reduced the price at the pump by 57 cents per gallon on Sept. 1.

However, Republican leaders, including Gov. Eric Holcomb, instead decided to use $1 billion from the state's budget reserves to pay eligible Hoosiers a $200 taxpayer rebate to cope with the inflation affecting all their purchases, not just gasoline.

They said it didn't make sense only to focus on gasoline taxes since approximately one-fifth of the gasoline sold in Indiana is purchased by non-Indiana residents, and there's no reason to give them a tax break. 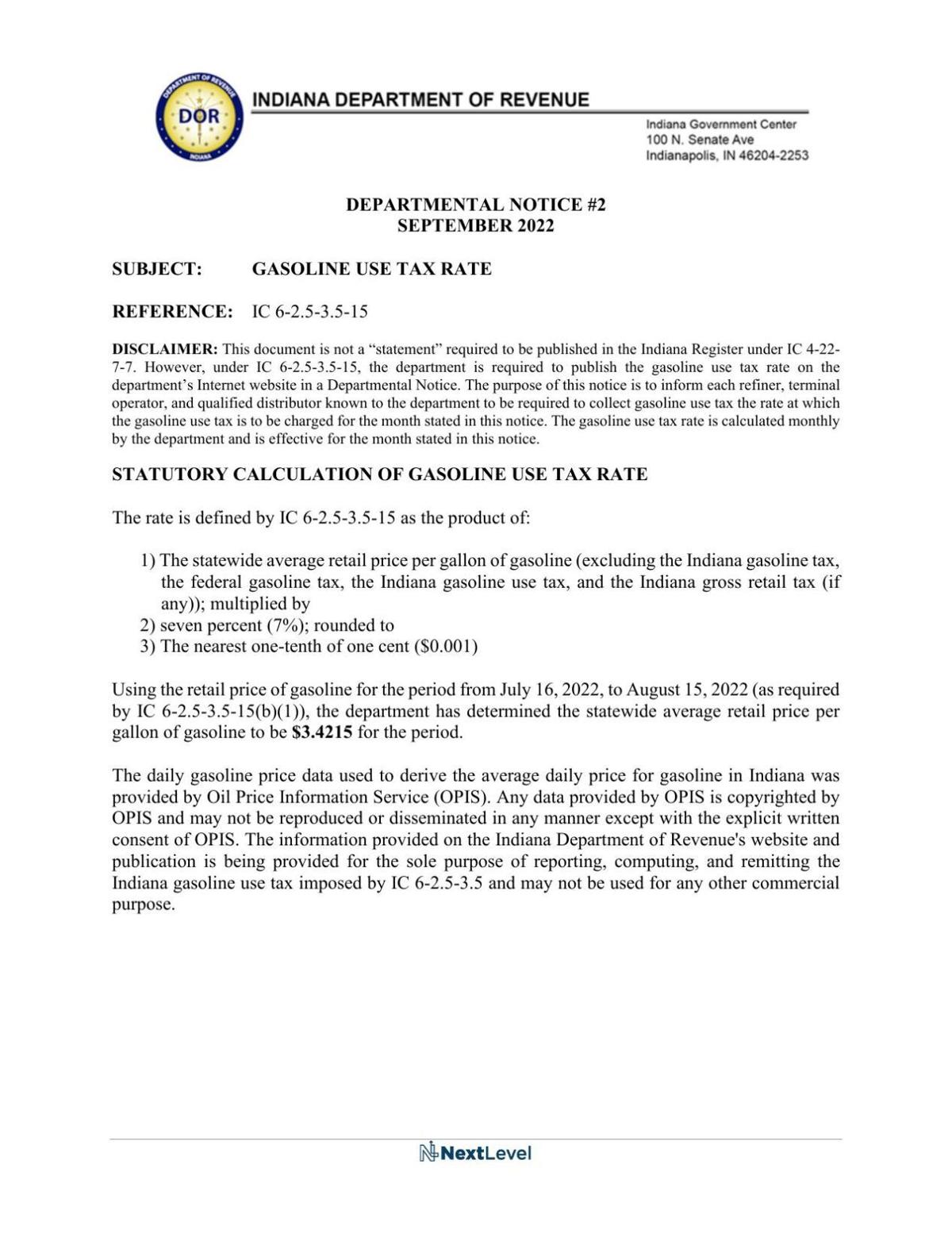 At the request of the governor, the General Assembly will meet July 25 to consider returning $1 billion of the surplus to taxpayers in the form of $225 payments to each eligible adult in the state.

Indiana gasoline taxes in July will be highest in state history

Hoosier motorists will pay an unprecedented 80.5 cents in taxes, including 62.1 cents in state taxes, for every gallon of gasoline they purchase in July.

The Republican chief executive outlined a plan Thursday for Indiana to pay $225 to all adult Hoosiers in July or August, on top of the $125 automatic taxpayer refund payments already going out.

Both men suffered blunt force trauma and each of their deaths were classified as accidental, according to the coroner's office.

Governor no longer needs glasses to look ahead

The 54-year-old Republican underwent surgery earlier this month to remove cataracts from both of his eyes and to improve his vision overall.

Data released Friday by the State Budget Agency show Indiana took in $1.55 billion in general fund revenue during the month of August.

Hoosiers will pay a total of 73.4 cents in taxes, including 55 cents in state taxes, for every gallon of gasoline they purchase in October.

Hoosiers will pay a total of 74.5 cents in taxes, including 56.1 cents in state taxes, for every gallon of gasoline they purchase in November — the fourth-highest rate in Indiana history.