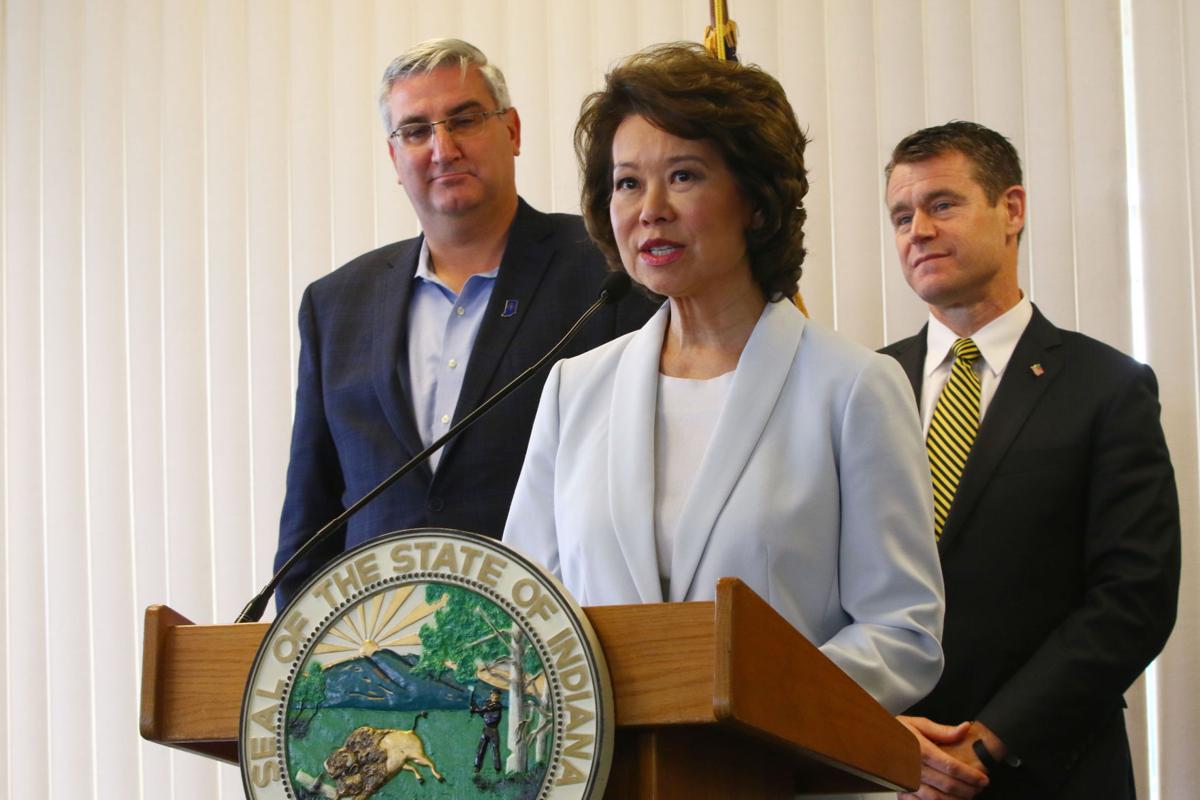 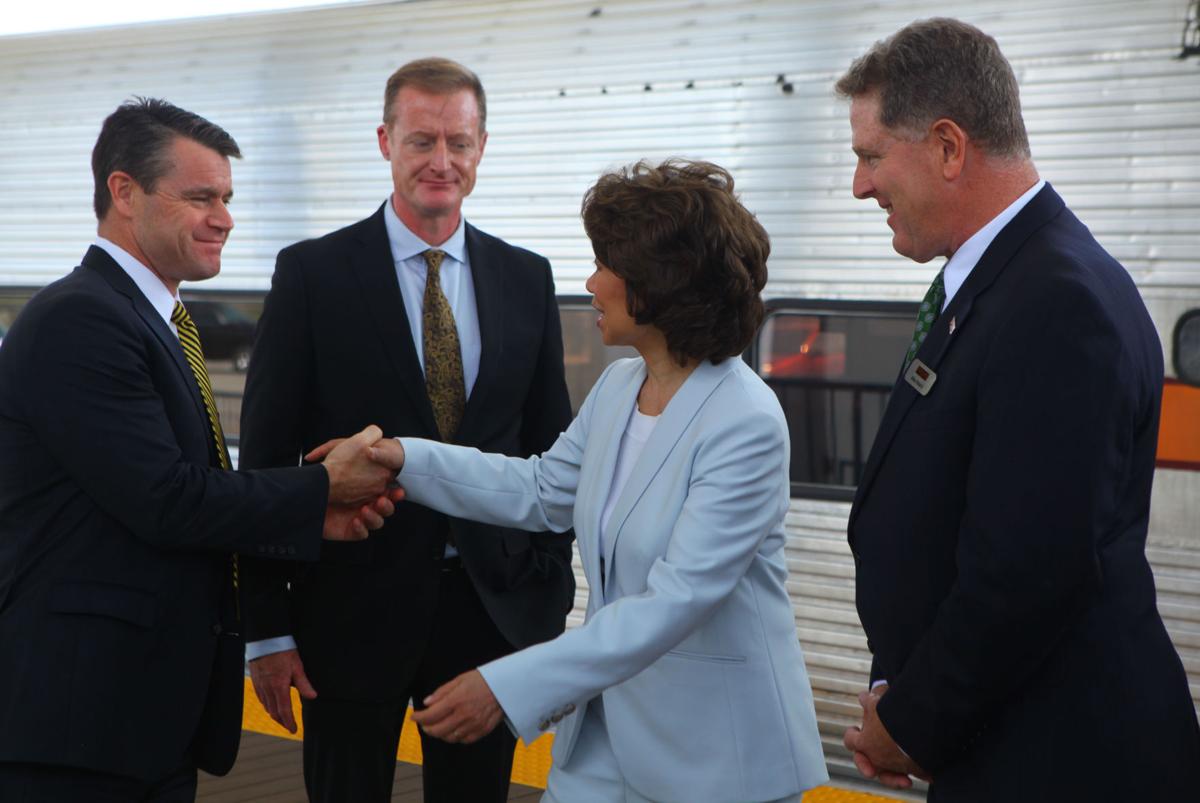 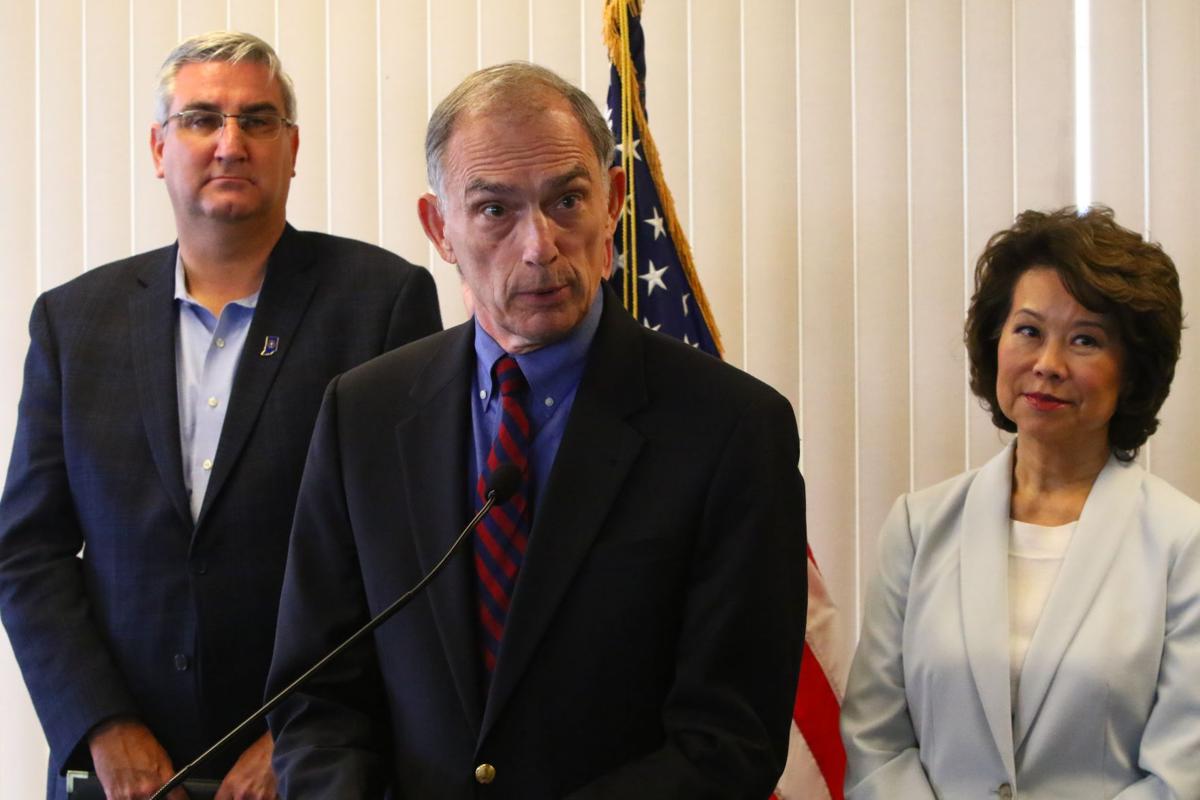 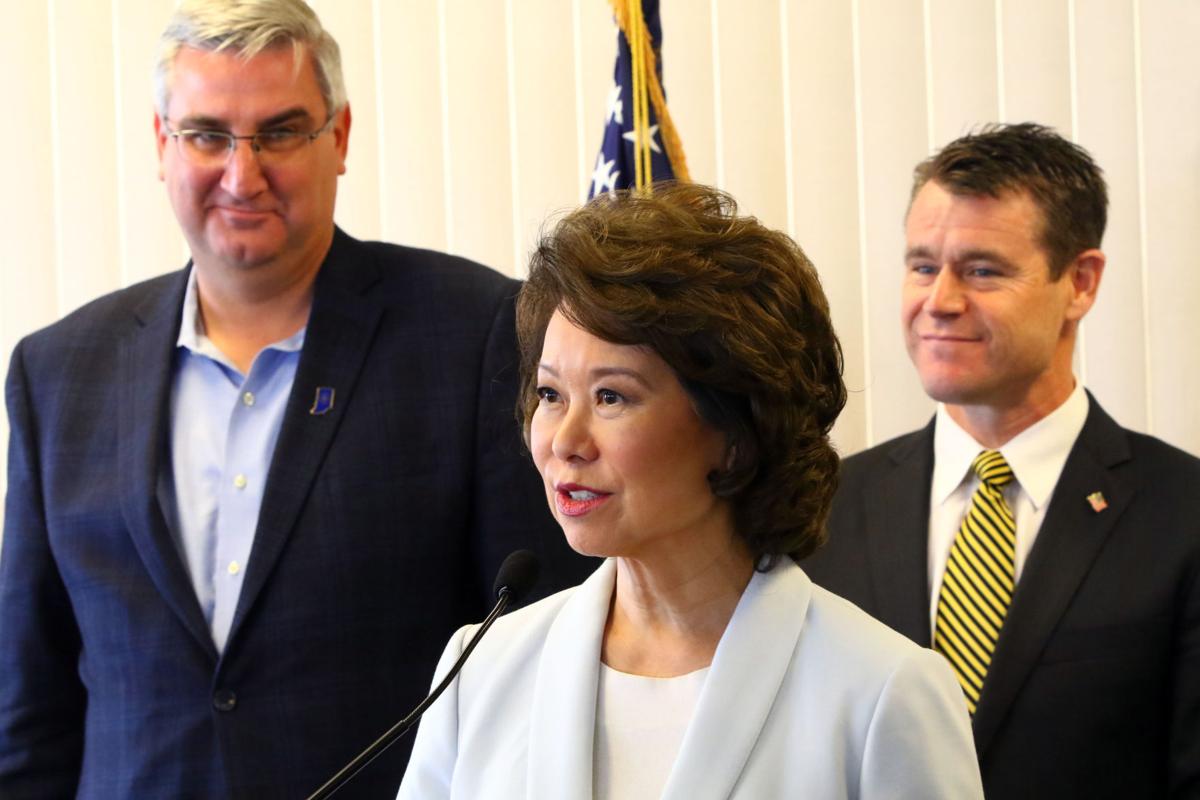 U.S. Secretary of Transportation Elaine Chao, center, speaks at a press conference at the South Bend International Airport on Tuesday. Behind her are Gov. Eric Holcomb, left, and Sen. Todd Young, R-Ind. 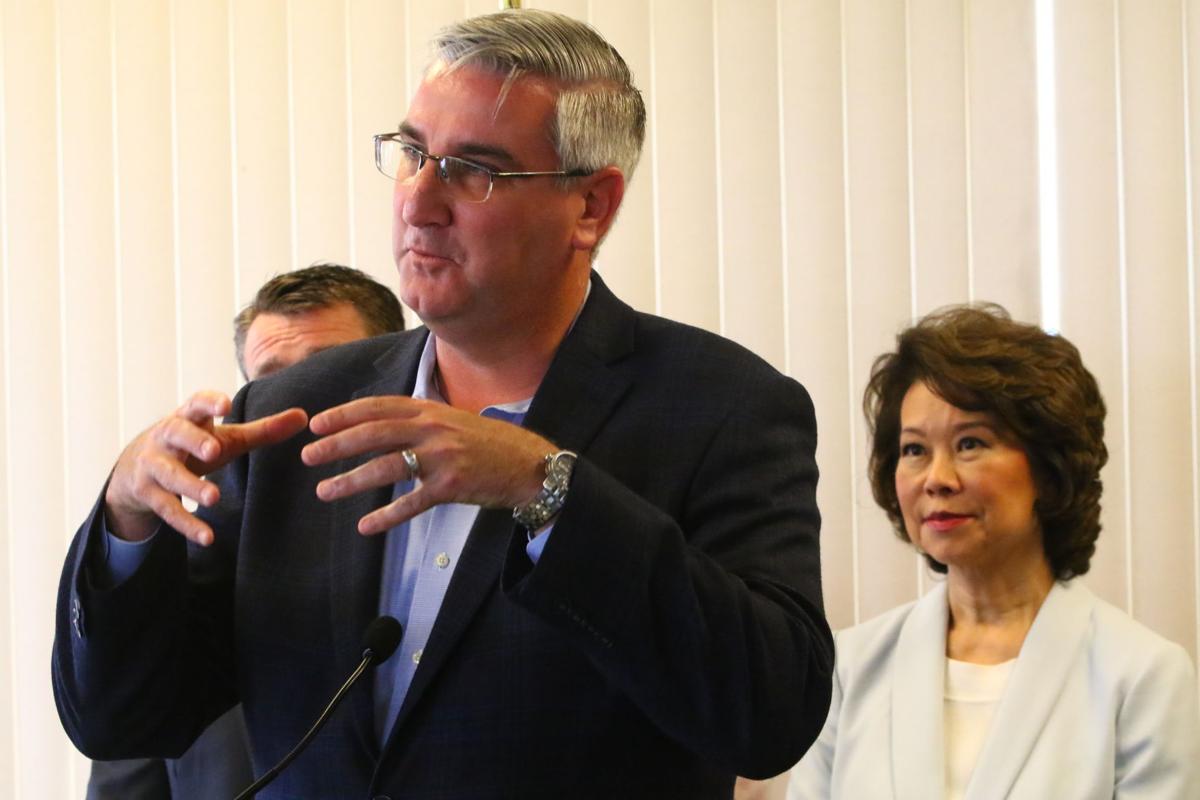 Gov. Eric Holcomb speaks at a press conference on Tuesday at the South Bend International Airport. Behind him and to his right his U.S. Secretary of Transportation Elaine Chao. 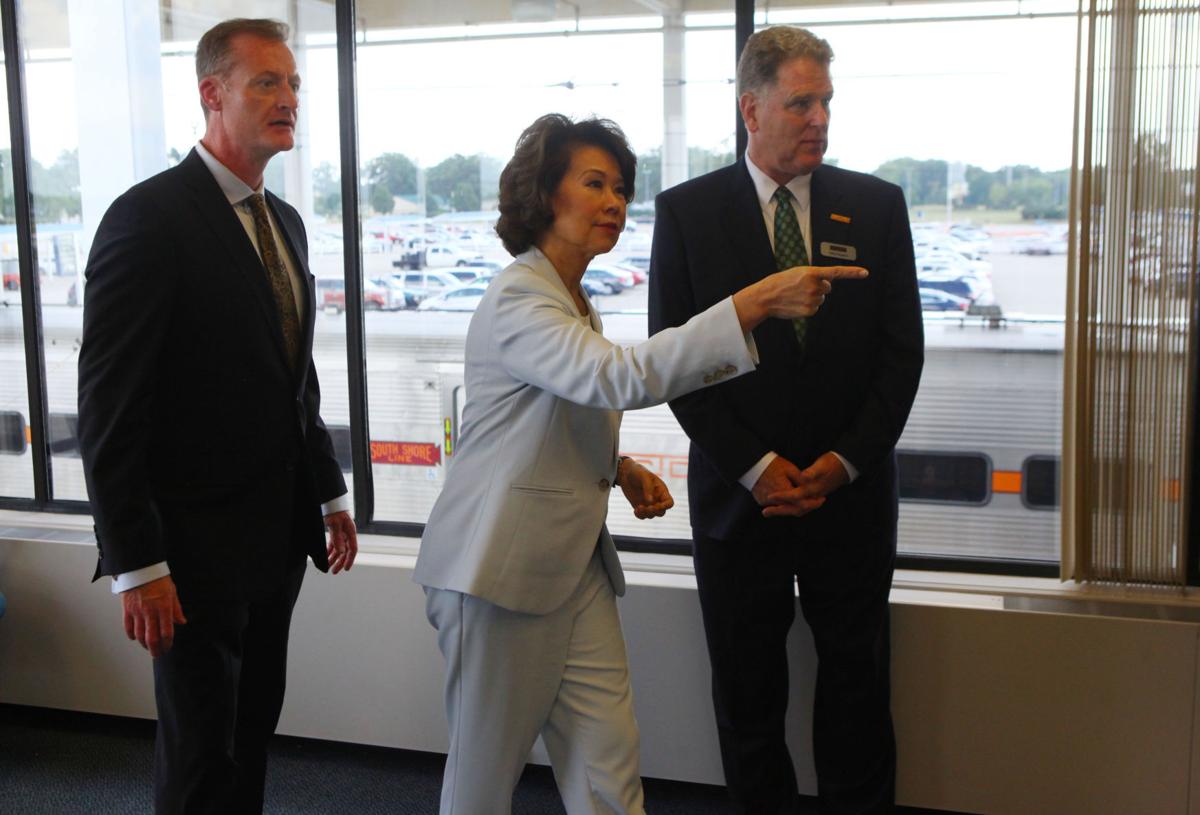 U.S. Secretary of Transportation Elaine Chao, center, motions for the group to go downstairs to the platform to see a South Shore Line train on Tuesday at the South Bend International Airport. 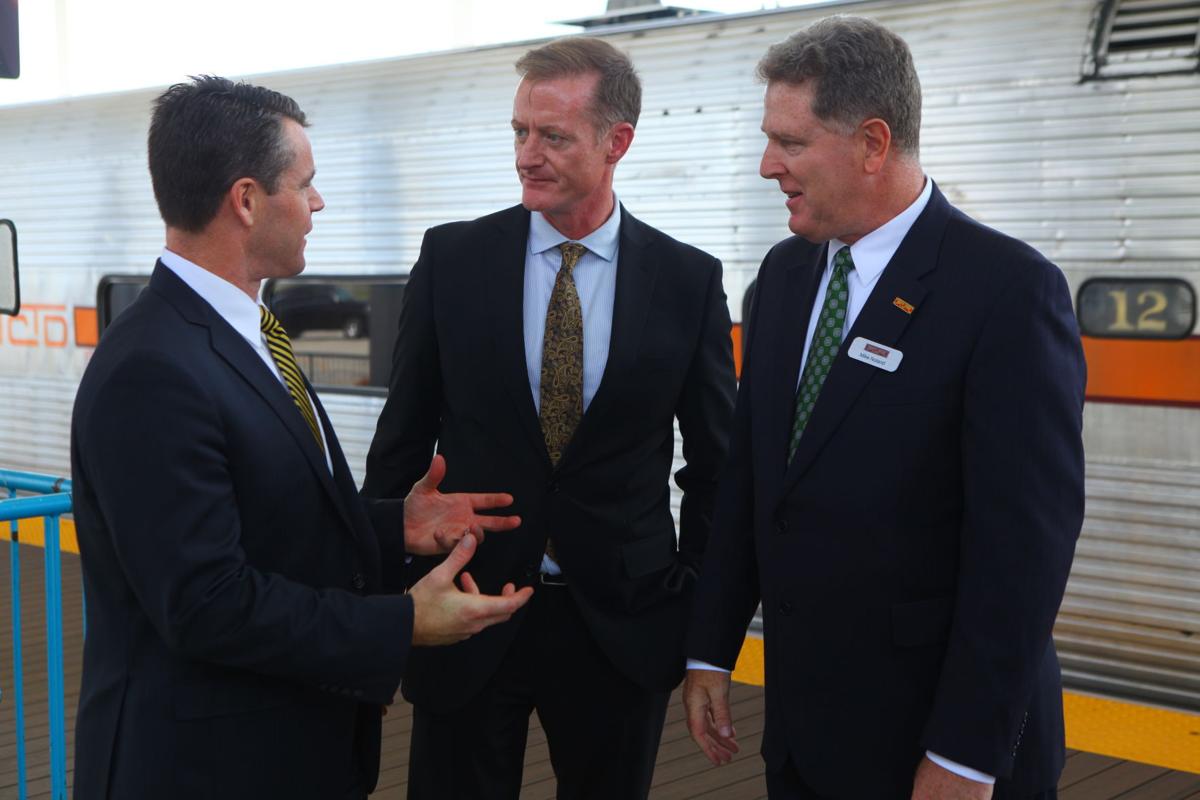 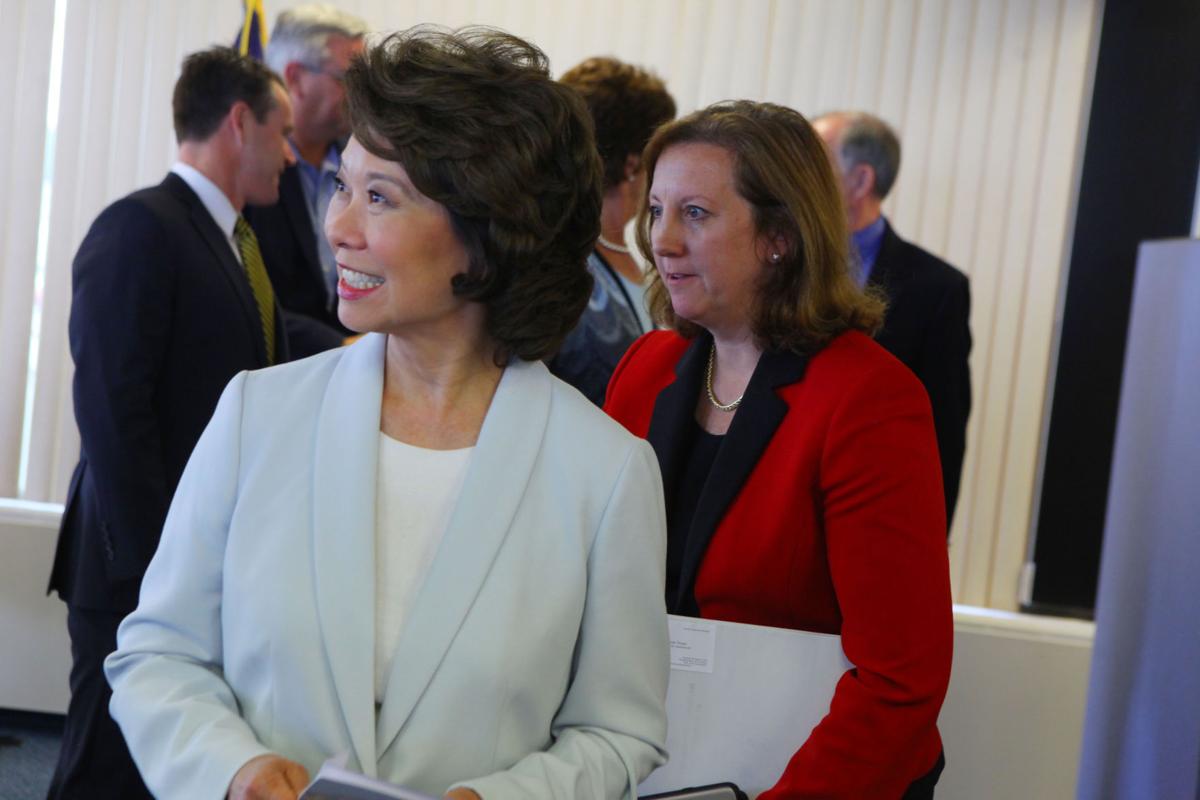 SOUTH BEND — U.S. Secretary of Transportation Elaine Chao suggested Tuesday that bipartisan support and the opportunity for private development associated with the South Shore Line's major infrastructure projects will be important factors as the projects move through the planning stages.

The secretary made the comments after a two-hour briefing on the South Shore's West Lake Corridor, Double Track NWI and South Bend realignment projects at South Bend International Airport.

The West Lake and Double Track projects depend on federal grants to finance half the construction costs.

"That is an application that is in progress, so I will not talk more about it," Chao said of the grants. "Suffice it to say that the bipartisan nature and the public-private partnership aspects of any project would be ones that are important to us."

Earlier Tuesday Chao attended a ribbon-cutting for the Indiana Toll Road's 80/90 Push project, a $220 million initiative to rehabilitate 51 miles of the highway and several interchanges. The project was undertaken by the road's private operator, Indiana Toll Road Concession Co.

Chao called that "a wonderful example" of a public-private partnership. The administration of President Donald Trump has highlighted private investment as a main component of an as-yet unrevealed infrastructure plan.

The administration also has recommended to Congress that it phase out the Capital Investment Grant program, which would provide the federal financing for the South Shore projects.

But Republican Sen. Todd Young and Democratic Rep. Pete Visclosky expressed optimism their respective houses would continue the programs in the coming years.

"I support robust funding of the Capital Investment Grant program," Young said. "One would think this would be a natural fit for receiving funding."

Visclosky, a member of the House Appropriations Committee, said appropriators in both chambers have maintained the programs in bills they've sent to their respective full membership.

"My colleagues in a bipartisan fashion on both committees recognize the value of investing in these programs to create jobs and grow economies in all 50 states of the nation," Visclosky said.

Young said other funding sources would be investigated if necessary, but that the grant programs "would be very important."

Those involved called it a positive and unique meeting. They keyed on the themes of bipartisanship and private investment that Chao mentioned afterwards.

"This afternoon the secretary witnessed firsthand the tremendous bipartisan support at the local level, at the state level and at the federal level that we Hoosiers have put forward in order to ensure we take this project all the way to completion," Young said.

The RDA will take the lead role in promoting growth in the areas around South Shore stations using the newly created Transit Development District tool.

"I'm most excited about the idea that our project lines up very closely with the values of the administration in terms of the private sector investment potential and job creation around this project," Hanna said. "We look quite a bit different from other projects from a national perspective, in that we're coming with 100 percent of state and local funding. We're also coming with plans focused on job creation."

Noland said the meeting had the character of "a big staff meeting. It really drilled down on the core aspects of the projects and the public-private aspects, the private investment potential," he said.

"I think the secretary walked away with a real strong impression of the commitment this state has, led by Gov. Holcomb to make these projects a reality," Noland said. "From here, we keep pushing in Washington, but I thought today couldn't have gone better."

It's always encouraging to see the stock rising for plans putting our Region on course to economic transformation and growth.

INDIANAPOLIS — Gov. Eric Holcomb is pressing the Trump administration to include full federal funding for double-tracking of the existing Sout…

The appropriations committees of both houses of the U.S. Congress produced 2018 transportation budgets in July that left South Shore Line offi…

Double Track local funding finalized; now it's up to feds

U.S. Secretary of Transportation Elaine Chao, center, speaks at a press conference at the South Bend International Airport on Tuesday. Behind her are Gov. Eric Holcomb, left, and Sen. Todd Young, R-Ind.

Gov. Eric Holcomb speaks at a press conference on Tuesday at the South Bend International Airport. Behind him and to his right his U.S. Secretary of Transportation Elaine Chao.

U.S. Secretary of Transportation Elaine Chao, center, motions for the group to go downstairs to the platform to see a South Shore Line train on Tuesday at the South Bend International Airport.