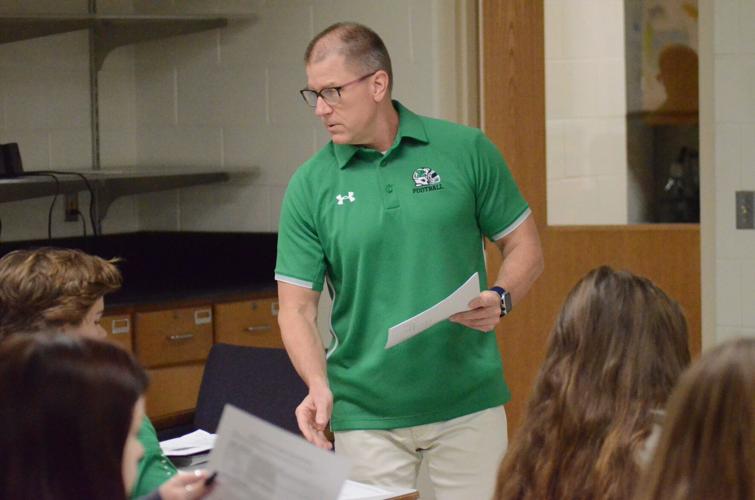 Pat White, a longtime trainer at Providence Catholic High School, in New Lenox, was honored for his contributions March 25. 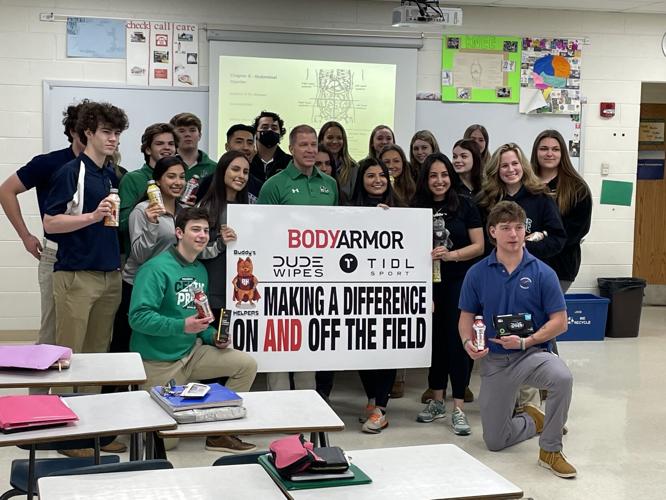 Students join Pat White for a photo after he was recognized by Buddy’s Helpers for his years of service as Providence’s athletic trainer.

A few years ago, Pat and Sherry White dined out and the restaurant they were at had televisions broadcasting sporting events.

Pat White noticed one of the TVs was showing an international soccer match, and he saw Brad Guzan was the goalie for the United States national team.

It was truly an “I know that guy!” moment.

Guzan attended Providence Catholic High School, and White was one of his teachers and trainers.

Seeing former students and athletes playing at a high level is just one of many rewards White has enjoyed in 27 years as an athletic trainer, including the past quarter of a century at the New Lenox high school. (His first tow years were spent at Middlesex high school in New Jersey.

White was surprised and honored March 25 by the Buddy’s Helpers group, an organization that recognizes athletes, teachers and coaches for actions on and off the field. He was honored for the help he has given students over the years.

White was presented with White Sox tickets and tickets to a July 30 soccer  doubleheader at Soldier Field featuring the Chicago Fire and Chicago Red Stars. The Fire will be taking on Atlanta, and Guzan is on that squad’s roster.

White also received a check to go to a charity of his choice.

“It’s not just about icing. We provide medical care for the student-athletes here at the school. That’s pretty important.”

Members of a group of athletes from the Buddy’s Helpers organization agree.

“When you think about it from a self-care standpoint, Mr. White does a lot for his students every single day,” said Jonathan Rodriquez a former soccer star at Thornton Township High School, in Harvey.

“The most important and essential items that are talked about are self-care," Rodriguez said. "Exercise, nutrition and recovery are what he stresses to his students and trainers re-enforce to tens of thousands of students throughout the state.”

White has had some issues with his knee and shoulder that required surgery, so he can identify with what some of his students are going through.

“When I see student-athletes with labrum tears (in the shoulder) and surgeries and things like that, it’s important that I can communicate with them what to expect and what their setbacks might be,” White said. “I let them know what the healing and recovery time is moving forward.”

White admits he might not always be the best patient when it’s his turn to heal.

“I probably don’t follow all of the advice that I give my student athletes,” he admitted. “When I say, ‘did you ice last night?’ and they say ‘no’ I say ‘I understand, I probably wouldn’t have either.’ I’m probably a noncompliant patient for the most part.”

He studied at Illinois State University and earned a master’s degree in athletic training.

After working at a hospital in Joliet that had a connection with Providence, he pursued a teaching degree and joined up with the school and never left.

He has been around for the success of several football and baseball state championships and has worked with athletes who have gone on to play college and professional sports.

It’s a job he loves, but White admits there are some big-time challenges.

“You have to be prepared for anything,” he said. “Aside from the players, someone from the band might get injured. Someone could fall from the stands. You never know what you are going to be faced with that day. It’s unexpected.

“You have to be able to think on your feet and think fast and make quick decisions. It can be a high-stress job.”

An 11-year-old from Orland Park is honored for his artistic efforts to raise funds for Ukraine relief.

April is a huge month in men’s college volleyball, and the area is chock full of alums on teams that made it to national tournaments.

A bill that would provide the funds to turn the Lincoln-Way North High School property into an Illinois State Police training facility is working its way through the Illinois General Assembly.

It’s the perfect storm — historic low inventories, rising prices, builders who can’t keep up with demand and a desire to move to one of the communities that make up the Southland.

A Chicago-based artist known for her abstract sculpture is exhibiting her work at South Suburban College in South Holland.

Cook County is accepting applications for mail-in ballots for the June 28 primary.

Pat White, a longtime trainer at Providence Catholic High School, in New Lenox, was honored for his contributions March 25.

Students join Pat White for a photo after he was recognized by Buddy’s Helpers for his years of service as Providence’s athletic trainer.