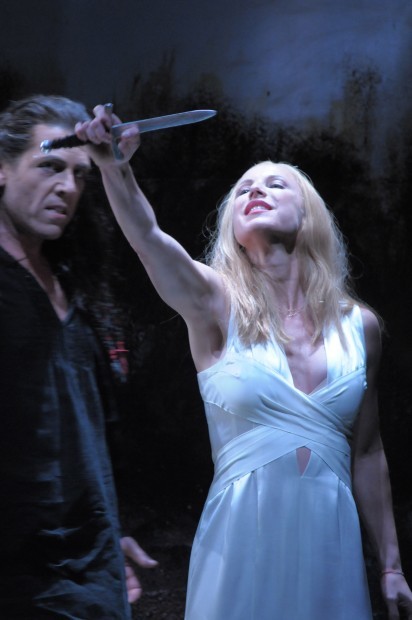 Fatal attraction: German-born soprano Nadja Michael (right) plays the dangerously seductive Lady Macbeth, who goads her husband (Elkhart native-baritone Thomas Hampson) to murder in Verdi's "Macbeth" at the Lyric Opera in Chicago. Saturday is your last chance to watch the couple fall victim to their ambitions at the Civic Opera House. (Copyright by Dan Rest)
Bundled-up parents escort costumed children to the city's annual "Chicagoween" parade in the Loop. The one-time State Street event has relocated to Daley Plaza.
BY MOLLY WOULFE , (219) 852-4329

"Macbeth" is one witchy night at the opera.  And Mrs. Macbeth turns this Lyric Opera premiere into a devilish Halloween treat.

For the last four weeks, the German-born soprano has been steaming up the stage in the Verdi tragedy. Under the direction of Barbara Gaines, Lady Macbeth radiates a murderous sexuality.

We meet the Bard's most famous villanness, in a skin-tight red gown, plotting murder in her candelit lair. She grabs the dagger from Macbeth (baritone Thomas Hampson) in her impatience to finish off good King Duncan. She oogles courtiers in her brief rule as queen.

And Her Ladyship flashes lots of flesh when she straddles Macbeth, goading her mate to kill again. Saturday is the last night to catch this barn-burner at the Civic Opera House.

It's all in a day's work for Michael, 41, whose sexually charged star turns in "Salome" and "Médée" have hiked eyebrows -- and ticket sales -- soaring from London to Belgium.

From her perspective, Lady Macbeth is a brilliant ambitious woman, bitter at her role on the sidelines in a male-dominated society. Since sex is her only weapon, she uses it "to fulfill her dream for power," Michael said.

"That's what's left of their marriage. The sex, the touching, the attention they give to each other, is never out of love, out of tenderness, of really wanting to be together, but much more out of power," she said. "It's brutal and it's absolutely not nice."

In real life, Michael is frank, candid and sexy and decidedly non-bloodthirsty. A one-time music student at Indiana University, she  bikes to work and champions family-style foster care through SOS Children's Villages (she visited an SOS home Tuesday on the South Side). She also is a doting mother of two. Her daughters, 7 and 8, are regulars at her performances.

Note: She briefs them on what to expect.

In "Médée," she sings the title role of a betrayed queen driven to violence. Her girls, sitting in the audience, sometimes warn patrons not to be scared of her. "They say, 'You know, Médée" turns crazy and kills children. But in reality our mother would never do that. She loves us,'" Michael said, laughing.

Fox's upcoming, Windy City-based cop dream "Ride-Along" has been rechristened "Chicago Code" ... It's neither Halloween nor Thanksgiving, but Macy's has started installing its 2010 Yule windows at the State Street store. Look for a salute to "Yes, Virginia, there is a Santa Claus," the famous 1897 editorial in the New York Sun where newsman Francis P. Church assured a little girl that Santa exists "as certainly as love and generosity and devotion." The windows debut Nov. 6.

Princess Diana left quite an inheritance for her sons

Princess Diana left quite an inheritance for her sons

Selena Gomez says her past relationships were cursed

Selena Gomez says her past relationships were cursed

Shows will take place at 1, 4 and 7 p.m. today at The Hoosier Theatre in Whiting.

An outdoor art festival returns to downtown Valparaiso this weekend.

A Valparaiso resident has published a new book of short stories about running.

Britney Spears asks judge to free her from conservatorship

Britney Spears asked a judge Wednesday to end court conservatorship that has controlled her life and money since 2008.

Billie Eilish addresses video of herself 'mouthing a racist slur'

'Bad Guy' hitmaker Billie Eilish has responded to an old video of herself mouthing a racist slur.

"Ish Muhammad: Imagine Us" is now on display at the South Shore Arts Atrium Gallery in Munster.

Those fitness gurus from the 1980s: What happened to them?

Sure, you remember Jack LaLanne, moving vehicles with brute force. But who else got the heart pumping during the 1970s and 1980s?

Check out photos from celebrity weddings in the 1950s and '60s

Wedding gowns like those worn by Grace Kelly and Jacqueline Bouvier were endlessly copied, as were the choices of pearl chokers, veils, and flowers in the bouquets of countless others.

Fatal attraction: German-born soprano Nadja Michael (right) plays the dangerously seductive Lady Macbeth, who goads her husband (Elkhart native-baritone Thomas Hampson) to murder in Verdi's "Macbeth" at the Lyric Opera in Chicago. Saturday is your last chance to watch the couple fall victim to their ambitions at the Civic Opera House. (Copyright by Dan Rest)
Bundled-up parents escort costumed children to the city's annual "Chicagoween" parade in the Loop. The one-time State Street event has relocated to Daley Plaza.
© Copyright 2021 NWI Times, 601 W. 45th Ave. Munster, IN | Terms of Use | Privacy Policy
Powered by BLOX Content Management System from TownNews.com.
You don't have any notifications.