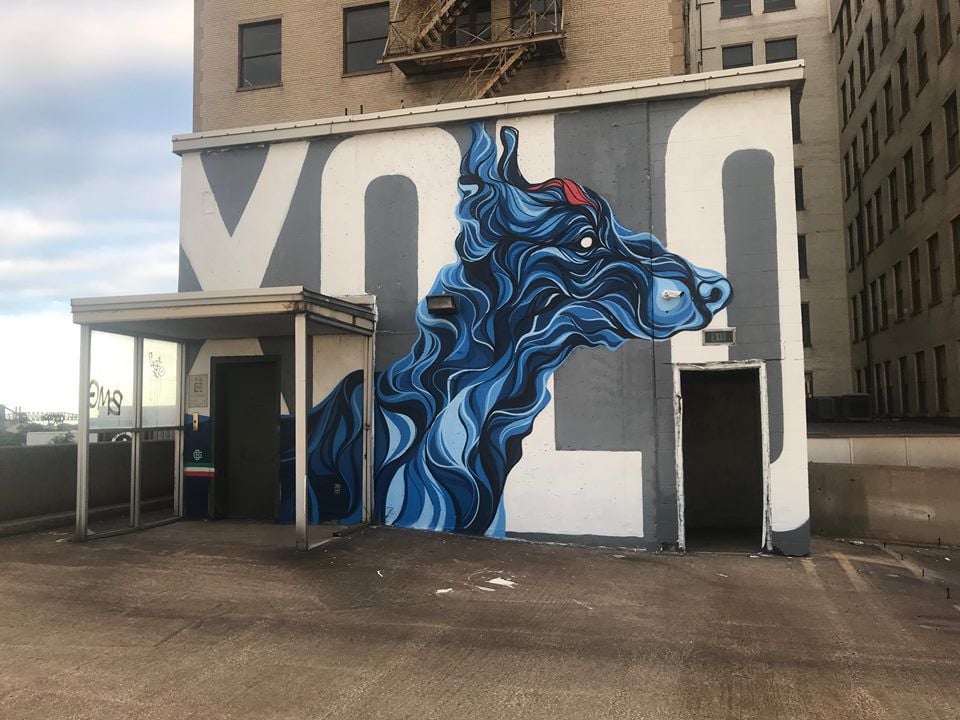 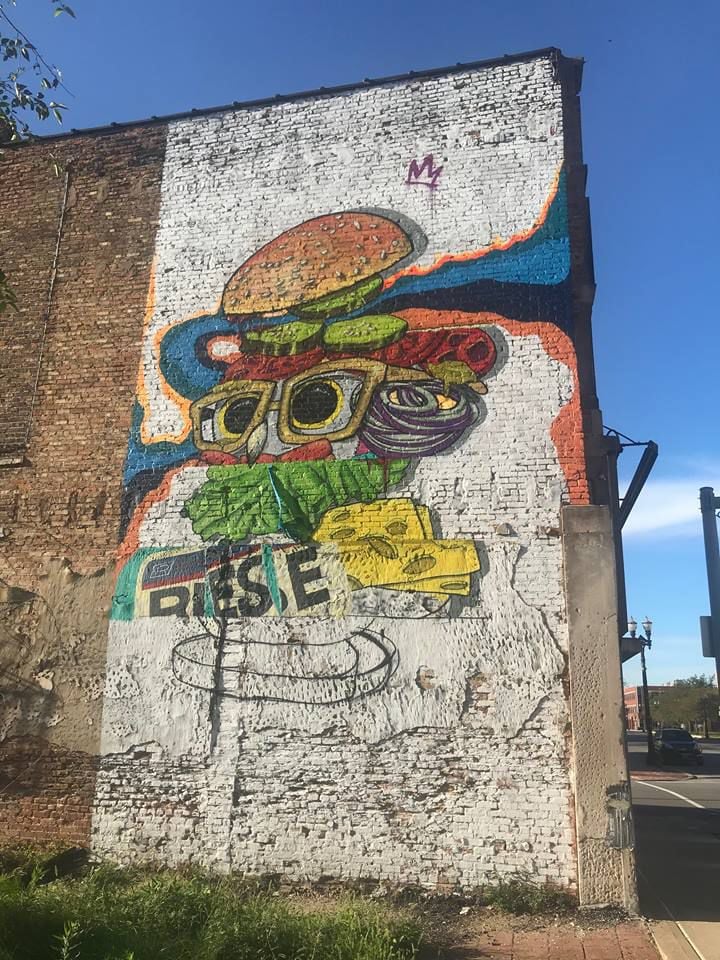 By the end of 2019, artists from across Northwest Indiana, the greater Chicago metro area and the world will have painted 60 murals on city-owned buildings across downtown and in every neighborhood in Gary. 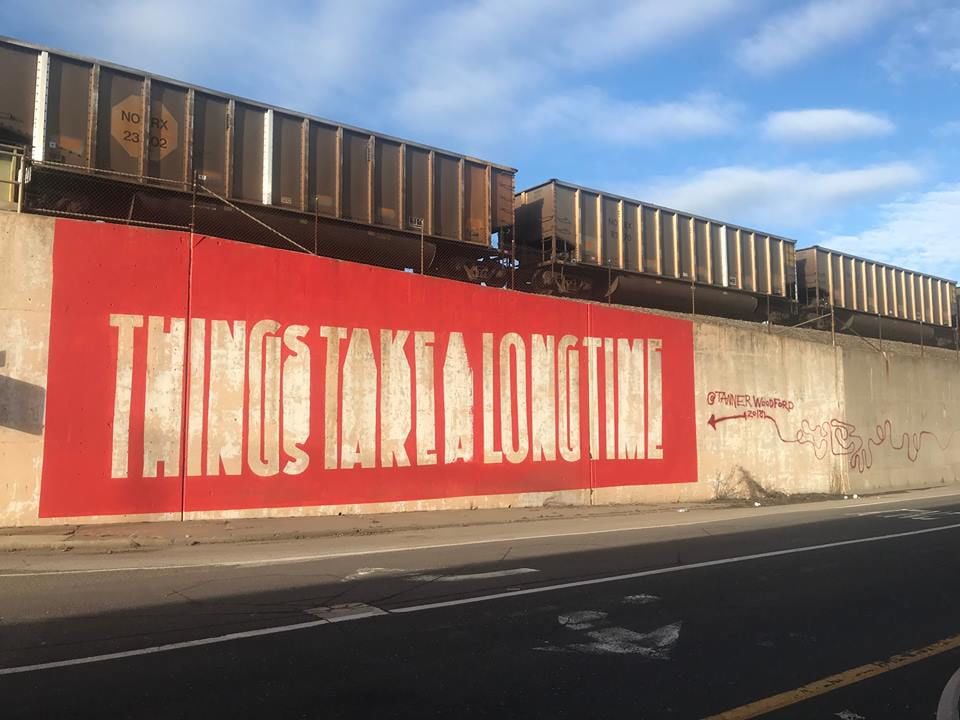 Lauren Pacheco's #PaintGary project includes commissions for artists from the Region, the Chicago area and the world. 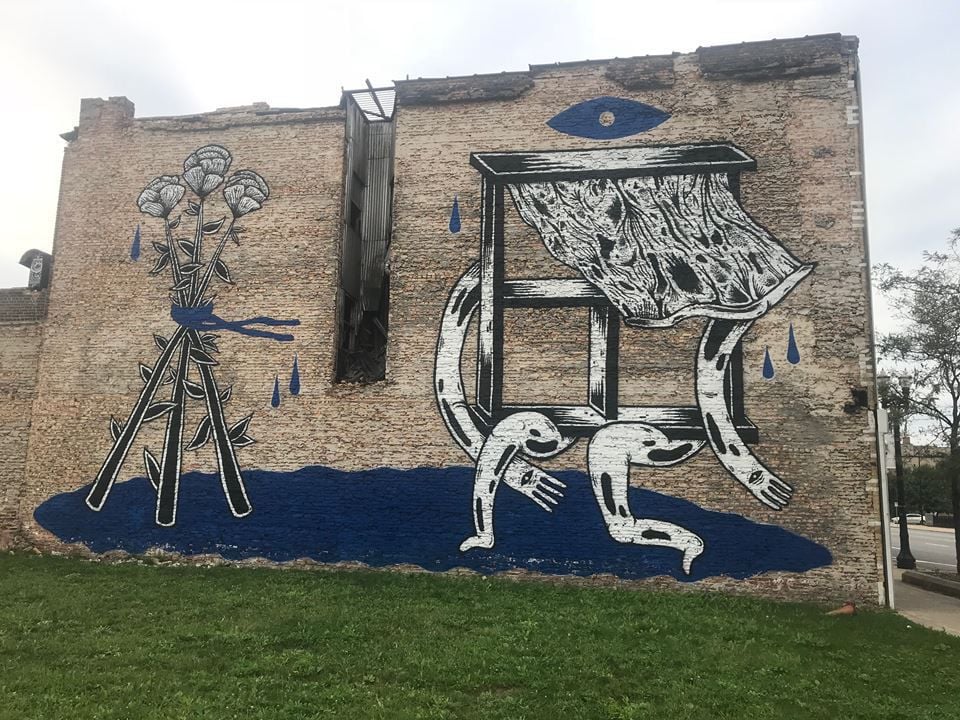 Artists from the Chicago area  and the world have painted murals on Gary's abandoned buildings as a way to revitalize the city. 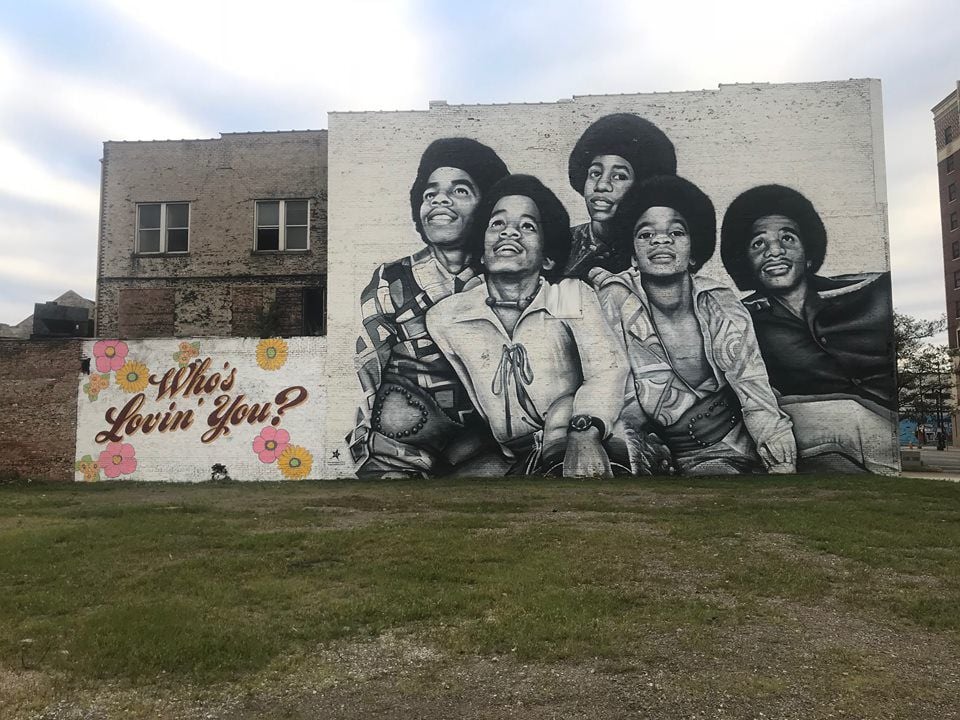 Felix “Flex” Maldanado’s eye-catching mural of the Jackson 5 on a four-story building is part of the #PaintGary project, which has commissioned artists to paint huge murals on abandoned buildings in downtown Gary. 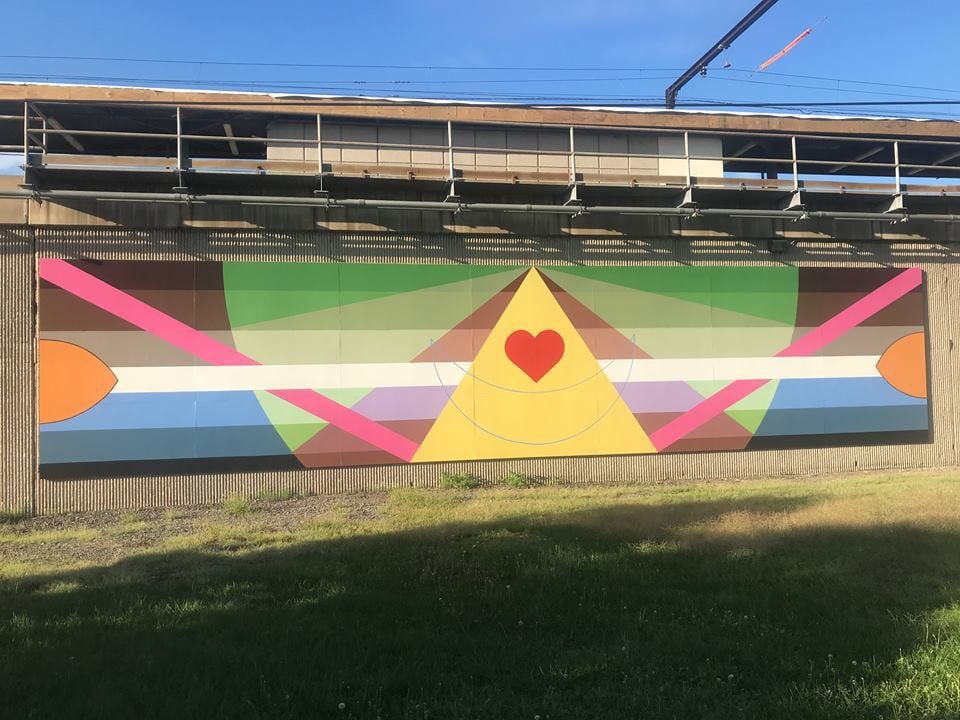 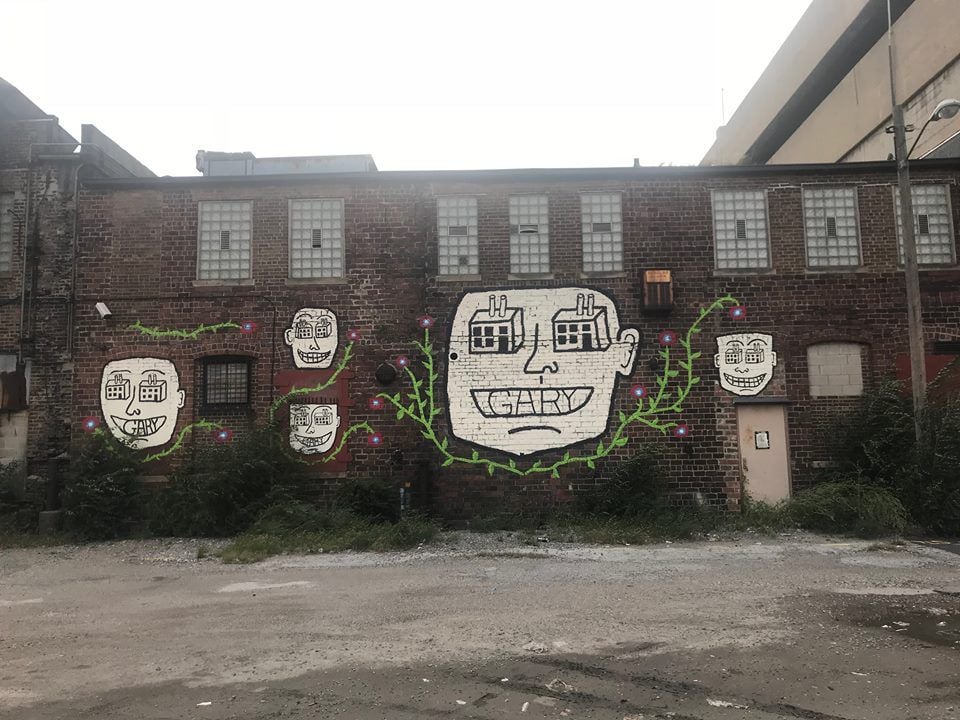 The #PaintGary project has splashed color on abandoned buildings in downtown Gary by artists from the Region, the Chicago area and the world.

Once a bustling retail mecca that’s suffered from decades of population decline and neglect, downtown Gary is filled with boarded-up storefronts, weed-ridden properties and crumbling buildings.

But a splash of color over the summer months has transformed the heart of the Steel City into a more vibrant, welcoming place.

Bright murals line Broadway, liven up the underpass under the Indiana Toll Road, and even loom at the top of the parking garage behind the old Gary State Bank tower.

By the end of 2019, artists from across Northwest Indiana, the greater Chicago metro area and the world will have painted 60 murals on city-owned buildings across downtown and in every neighborhood in the city.

It’s one of a number of efforts to harness the arts to revitalize a struggling old industrial city that’s been afflicted by blight and crime.

Arts groups working to this end include the Decay Devils' art park at Union Station; the Calumet Artist Residency’s Gary Poetry Project that covered abandoned buildings with spray-painted verse crafted by city residents; The Legacy Foundation’s public art projects like a mural of pioneering Mayor Richard Hatcher; a new sculpture one can sit on at the downtown bus stop; and Felix “Flex” Maldanado’s eye-catching mural of the Jackson 5 on a four-story building.

Pacheco, an arts administrator from Chicago who’s now the director of Arts Programming and Engagement at Indiana University Northwest, tapped artists she’s worked with previously to brighten Gary with color.

A professional photographer has recorded all their work, as the city eventually may raze at least some of the buildings that now serve as very public canvases.

“It’s local artists as well as from Chicago, out of town and out of country,” Pacheco said.

“The community has overwhelmingly been supportive. Some of the mural content, like it or hate it, has at least sparked conversations about art and artists that otherwise wouldn’t be taking place. We all have our own aesthetics and taste. People might love a piece and have an intellectual conversation. It might spark their imagination.”

Residents have stopped to thank artists, give them bottles of water, chat with them about their pieces, and snap pictures of their work. Motorists even pulled off the Toll Road to see artists paint the new piece, "Who's Lovin' You?" that is next to the towering Jackson 5 mural on Broadway.

“We want people to take to the streets, and walk and experience the art from a street level,” she said.

#PaintGary artists painted multiple murals along the train track and under the Indiana Toll Road to make the walk more inviting to pedestrians downtown and people getting off the South Shore Line station.

"We take different approaches to eliminate blight, but the #PaintGary movement has enhanced the city. Art is subjective, and some people don't like every piece, but it brings the conversation to life of what you'd like to see in the city."

The #PaintGary project has gotten a wide range of responses, said Sam Love, head of the Gary’s Arts and Culture Committee.

“To some, they’re an overdue and colorful change to the landscape,” he said.

“To some, they’re unrelatable and unwelcome as a portent of undesirable change. Though I would hope the latter would go stand before the 'Black Workers in Steel' mural. It’s awesome.”

“I think it’s a great positive for our downtown area,” she said.

“We have abandoned buildings, and it’s good to do something with them. It speaks to our willingness to embrace art in our development and place-making. We believe we have a great venue downtown and have some great art in the city, like the new mural in the downtown library.”

The project has gained a lot of momentum on social media, racking up more than 10,000 followers on Instagram. Pacheco hopes it will draw more visitors to Gary, whether they go to see a few murals or seek out all of them.

“People think of Gary as a hyperviolent, weaponized place, in terms of black and brown,” Pacheco said.

“We want people to think of the city in terms of the massive Jackson 5 mural, the old Union Station that’s been repurposed, and the Art Deco post office.

"We want people to think of beautiful spaces and art projects instead of violence and poverty. Some people see Gary as a crumbling city of unsalvagable buildings. We need to change the perspectives of Gary; we need to change the narrative of the city.”

Pacheco hopes her two-year mural project will blossom into something longer-term and more sustainable.

“We want a conversation throughout the city of Gary about municipal ways to sustain a public art program in the city,” she said.

“We not only want to preserve this work, at least archivally and online or in print, but (also) foster more public art-making. We’ve been working and tirelessly volunteering our time to share arts programming around the city, in our churches, libraries, and community, but we need to figure out a way to sustain it for the public.”

Divas and Kings of Gospel to perform Christmas concert in Gary

The Divas and Kings of Gospel will perform their third annual Spectacular Christmas Concert in Gary Saturday.

Anyone hunting for unique holiday gifts for friends and family should head to downtown Hammond Thursday night.

From her office in the former Gary State Bank tower that looms over downtown Gary, public arts administrator Lauren Pacheco has watched the ar…

Indiana’s population grew by more than 31,000 people this year

Indiana’s population grew by less than half a percentage point in 2018, putting it in the middle of the pack nationally for population growth,…

Are you an artist who could find inspiration in boundless lakefront, sweeping sand dunes, and rolling surf of the Indiana Dunes?

Munster-based Peoples Bank continued its expansion into Illinois by completing the acquisition of AJS Bancorp, the parent company of A.J. Smit…

A new hiking series hopes to get people more attuned with their spirituality in the Miller Woods in Gary.

Peoples Bank ended 2018 on a high note, posting a 40 percent year-over-year increase in profits in the fourth quarter.

A company is making premium handcrafted teas and lemonades in downtown Gary for Chicago restaurants.

Gary held its first “Celebration of Entrepreneurs” at City Hall last week to tout its Gary Micro-Enterprise Initiative, which has provided tra…

Artist to give talk at SideCar Gallery in Hammond

Northwest Indiana-based artist Ben Murray will discuss his work Saturday at the SideCar Gallery at 411 Huehn in Hammond.

A longtime painter and artist from Matteson, Illinois who did street portraiture in one of New Orleans' busiest tourist districts is exhibitin…

Sculptor Carmella Saraceno, who lives in Gary's Miller neighborhood and Chicago, is exhibiting her art at a Chicago gallery.

The Decay Devils cleaned up Gary's long-abandoned Union Station, covered it in bright colorful murals, and gained ownership of the historic tr…

Gary named the most miserable city in America

Gary was named the most miserable city in the country by Business Insider, which is the largest business news site on the internet in the Unit…

By the end of 2019, artists from across Northwest Indiana, the greater Chicago metro area and the world will have painted 60 murals on city-owned buildings across downtown and in every neighborhood in Gary.

Lauren Pacheco's #PaintGary project includes commissions for artists from the Region, the Chicago area and the world.

Artists from the Chicago area  and the world have painted murals on Gary's abandoned buildings as a way to revitalize the city.

Felix “Flex” Maldanado’s eye-catching mural of the Jackson 5 on a four-story building is part of the #PaintGary project, which has commissioned artists to paint huge murals on abandoned buildings in downtown Gary.

The #PaintGary project has splashed color on abandoned buildings in downtown Gary by artists from the Region, the Chicago area and the world.