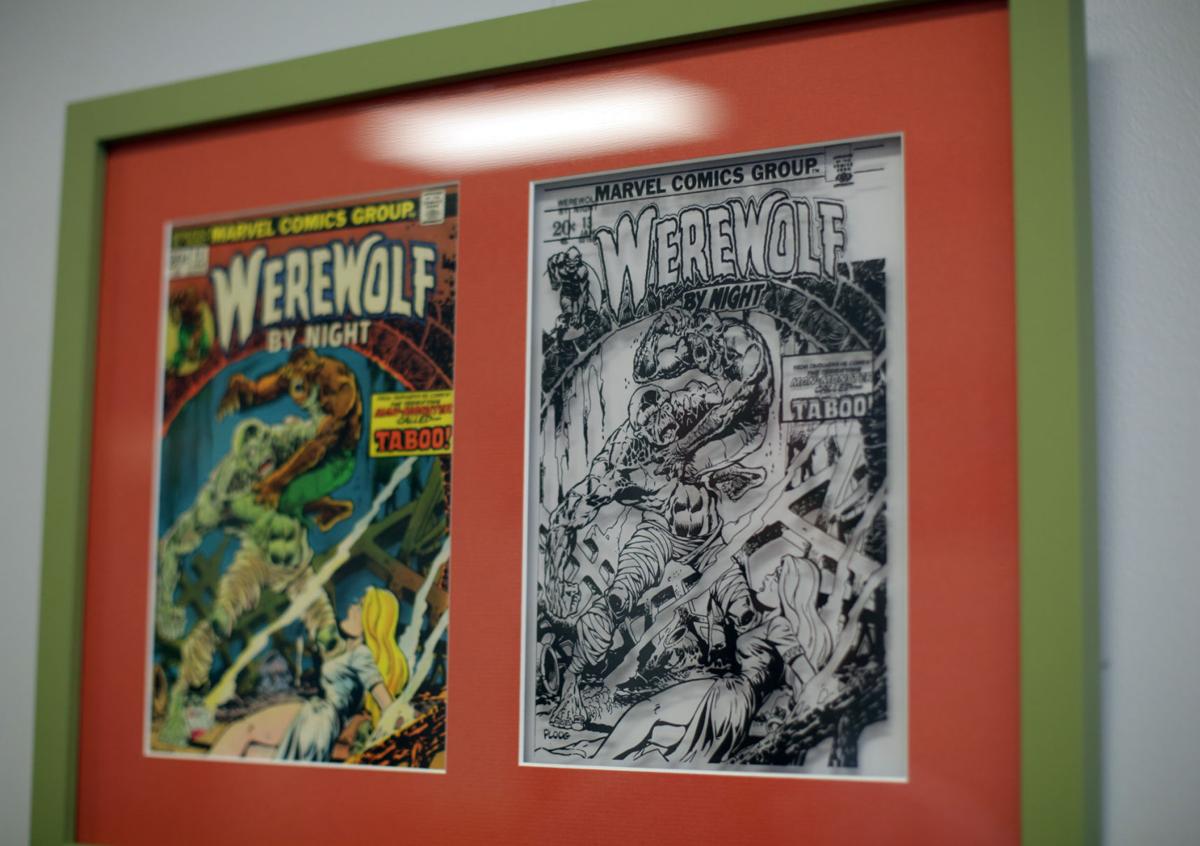 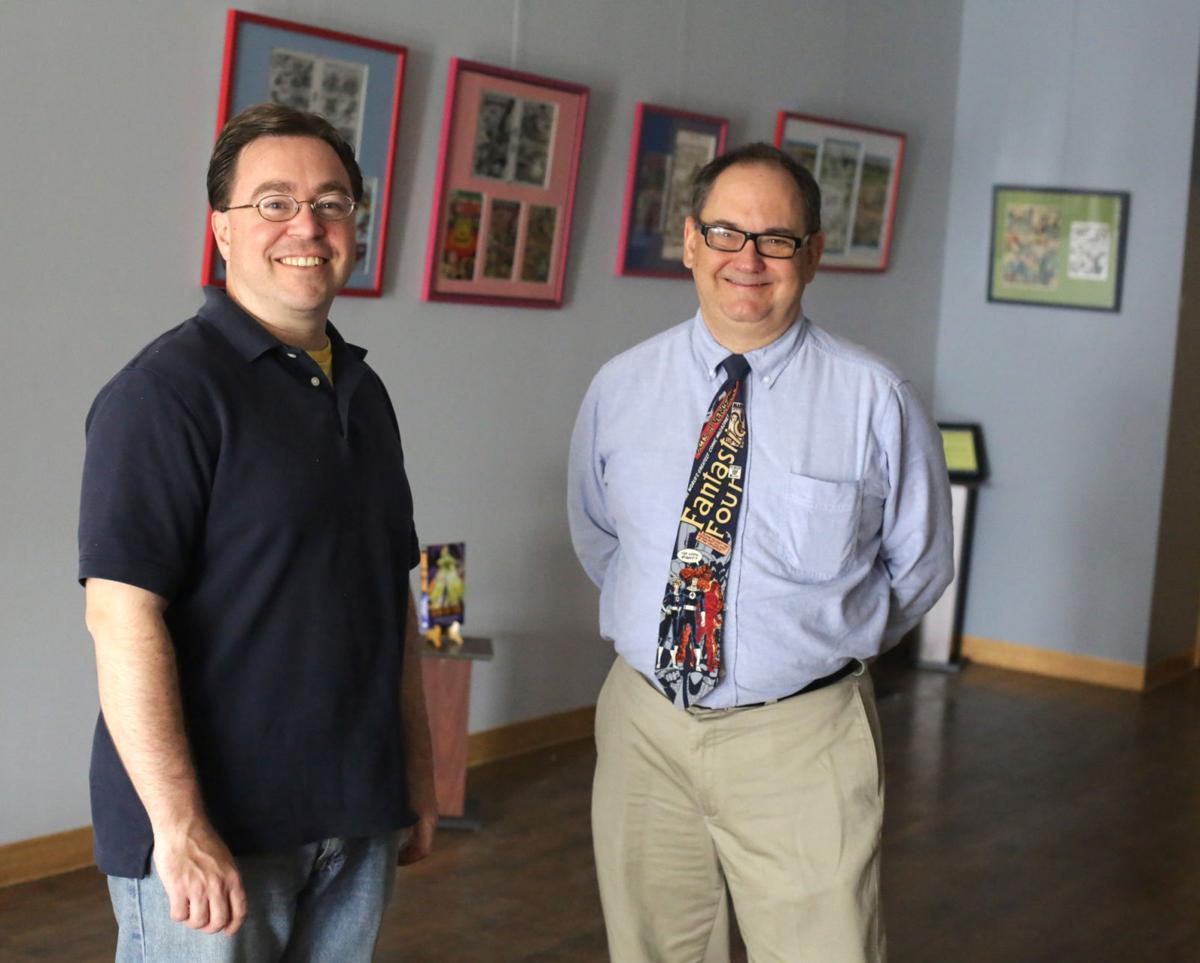 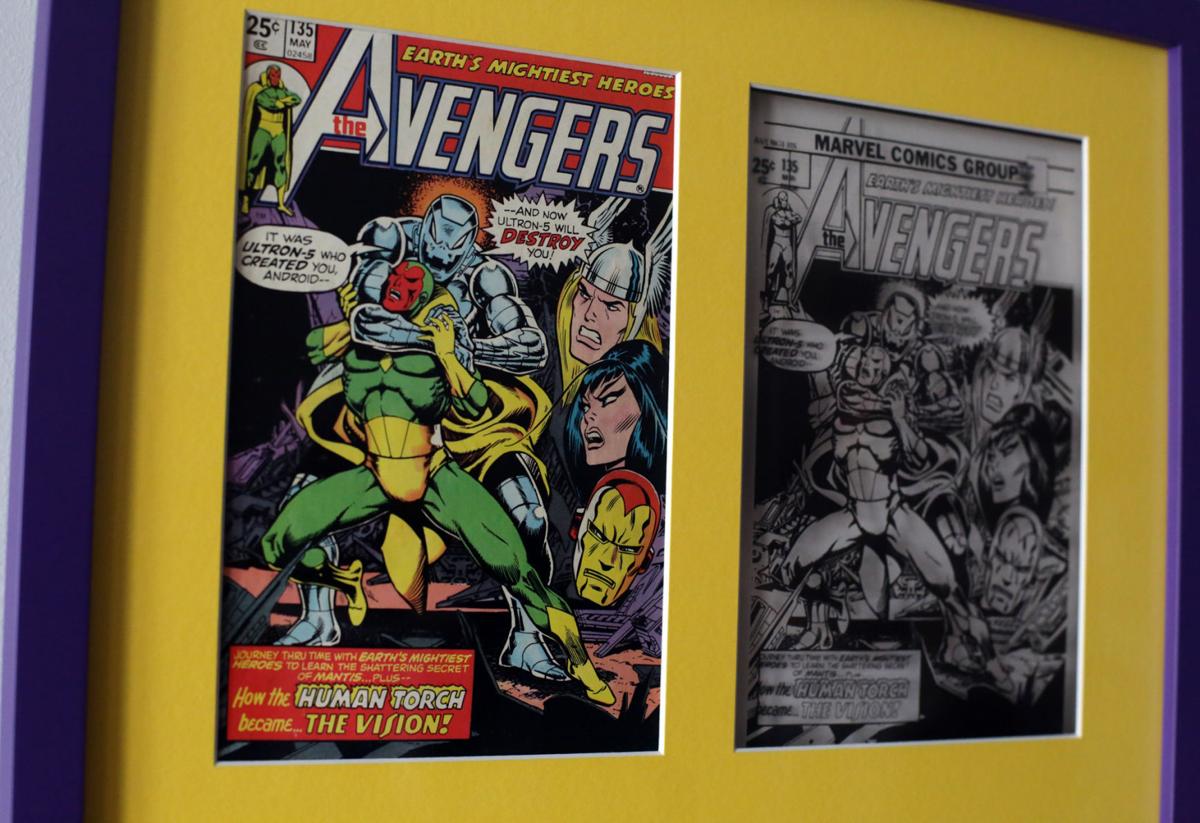 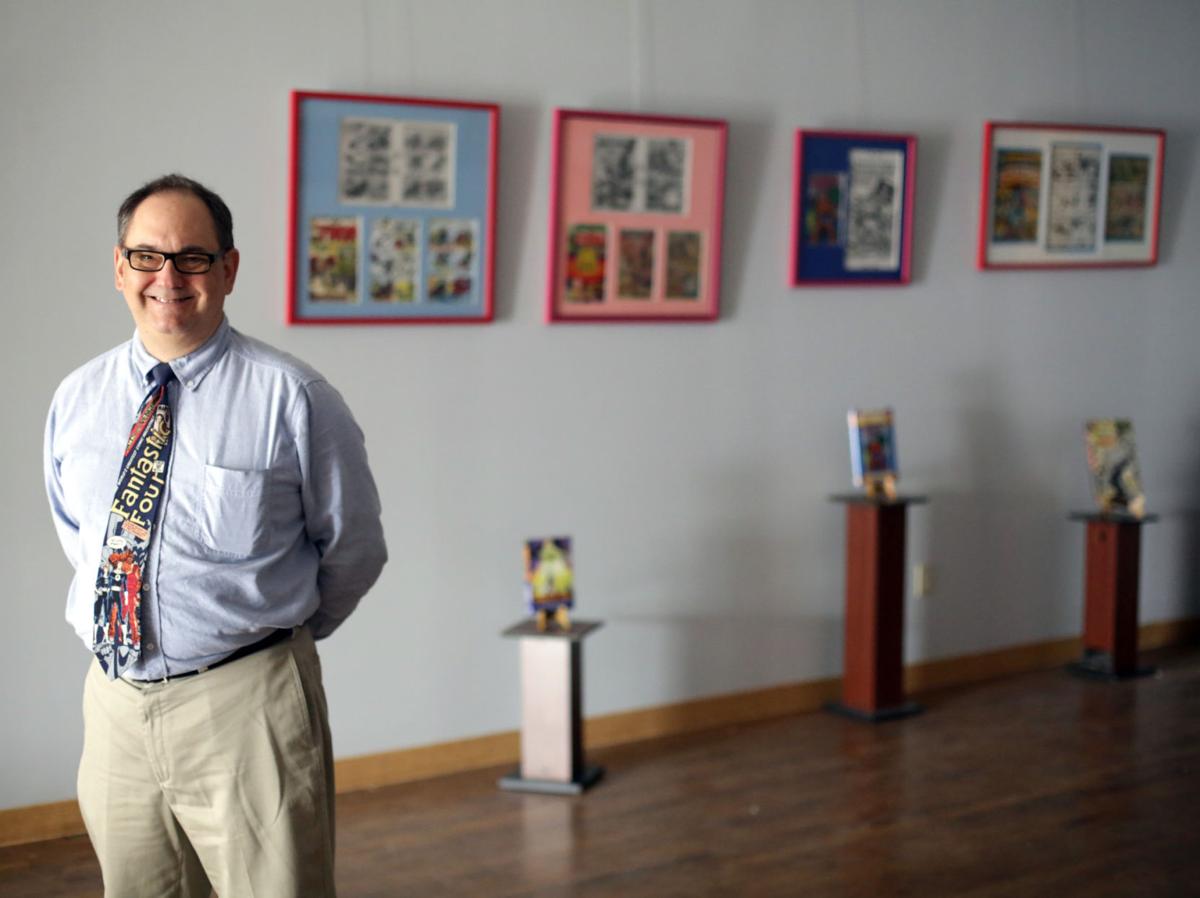 Mark Dominiak with a new show of his rare comic book collection, including production acetates, at Studio 659 in Whiting.

WHITING | You can see rare comic art at comic book conventions if you're willing to battle the hordes, carve out space near a booth and flip through a binder.

Studio 659 in Whiting is giving superhero fans of all ages a chance to take their time in a less crowded gallery setting to actually appreciate comic book art, including hand-drawn pieces by famous artists Jack Kirby and Steve Ditko.

The gallery at 1413 119th St. in downtown Whiting is debuting its "Superhero/Comic Art Show" between 6:59 and 9 p.m. Friday. The exhibit features Marvel titles such as "The Avengers," "Spider-Man," "Ant-Man" and "Dr. Strange," including high-resolution production acetates.

Studio 659 normally keeps exhibits up for a month, but this one is expected to be so popular that it will run for a second month, through July, curator Brian Lowry said.

"This is a family-friendly show, and it may appeal to dads who may want to reminisce about their own childhoods," he said. "Comics certainly have broad appeal in the culture now. Everybody who's interested can see the actual production art that was used to print the comics."

The free exhibit coincides with the Superhero Saturday event that's planned in downtown Whiting from 11 a.m. to 3 p.m. June 20, when visitors will be encouraged to dress up as superheros.

Whiting resident Mark Dominiak decided to lend the gallery his extensive collection of comic book art — which he's gathered from decades of collecting at the Chicago Comic-Con — when he learned of the event, which also will feature various superhero-themed activities for kids, comic book vendors, and one of the competitors from the Syfy show Face Off.

"He had a lot of these pieces framed, and had the matteing done in the primary colors of the comic books," Lowry said. "He selected these as the best examples of original art."

Dominiak has been collecting comic books since they cost 20 cents apiece during his childhood.

"It was a good way to stay of the street," he said. "I always enjoying reading and drawing. As I got older, I had more disposable income to build my collection."

The collection includes Marvel comics with the first appearances of Spider-Man, The Avengers, and The Fantastic Four, which will be on display at the gallery. One comic features the second appearance of the villain Ultron, who was just featured prominently in the blockbuster "Avengers: Age of Ultron" and another was signed by Marvel icon Stan Lee.

The framed pieces are hung on the wall with dialogue bubbles that contain educational information, such as about how the comic book production process works.

When: Friday through the end of July

WHITING | The "Underdog" theme song that played from the sound system on 119th Street was a sure sign that this was no ordinary day, but rathe…

SCHERERVILLE — Get ready to see Deadpool and Kylo Ren cosplayers, comic book artists and more at the wildly popular NWI Comic-Con, which retur…

Studio 659 in Whiting has brought back its annual "Deadly Intentions" exhibit, which the gallery says is one of its most popular shows of the year.

The popular NWI Comic-Con returns to the Halls of St. George in Schererville for a fifth year on Feb. 24.

Thanos's snap may have wiped out half the universe at the end of "Avengers: Infinity War," but don't expect it to be any less crowded at NWI C…

If you'd ask anyone in Whiting who is our most well-known artist, the answer would be the late Al Odlivak, whose works are exhibited all over town.

The impact music has made on the visual arts — and vice versa — cannot be underestimated in the eyes of Kathleen Ulm, curator of Whiting's Stu…

Kathleen Ulm, curator of Studio 659's "Life's A Tightrope," has cultivated a "greatest show in Whiting" of sorts with her circus–themed exhibit.

A longtime art gallery in downtown Whiting is returning under new management with a new exhibit highlighting art created during the coronavirus pandemic.

Mark Dominiak with a new show of his rare comic book collection, including production acetates, at Studio 659 in Whiting.