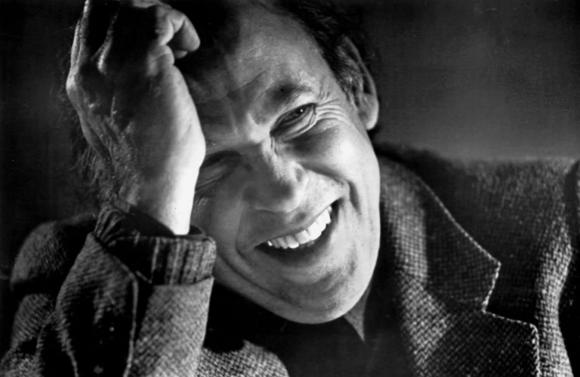 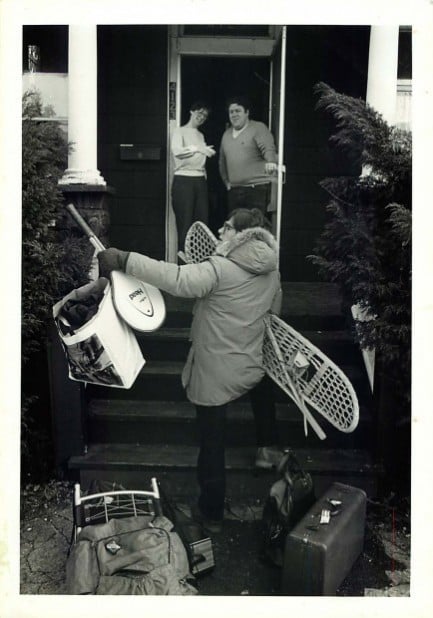 Pictured are Tim Kazurinsky, Mary Gross and George Wendt in a scene from a sitcom pilot that Sahlins directed that was shot at the house Denise DeClue lived in on Paulina in Chicago during the 1970s.

The problem when somebody like Bernie Sahlins dies is there's only one of him and there are thousands of other people who know how much he changed their lives. Many memories showing up on Facebook will be as much about the person who remembers, as about Bernie himself. And this being a "show biz" story, there are many, many "could've- been", "should've-been", "used-to-be", "wanna-be" stars of stage and screen who will tell their Bernie stories hoping to get noticed.

And that's sort of how it should be. Bernie Sahlins, one of the founders of Chicago's Second City, knew aspiring actors, directors and writers well. He was friends with geeky nutballs, and twisted geniuses, cerebral comedians and pratfall specialists. He tolerated their antics, nudged them to success, and trusted that the universe would cough up more fantastically smart and funny people to take their place in Chicago, when they'd gone away to seek fame and fortune on Saturday Night Live, or to make Animal House on the West Coast, or just to step away and get married and have kids.

He was used to incredibly vulnerable, terrified people who an audience could transform into the smartest funniest folks alive. You had the feeling he'd seen it all and he was razor-sharp at noticing "the exceptional".

By the time I got involved with Second City in the late seventies, Bernie was the boss on Wells Street. Joyce Sloan ran the box office and the touring company. Fred Kaz played the piano. The cast included Eugenie Ross Leming, John Belushi, I'm not sure who else. They were so smart and so funny. Everybody loved and hated Bernie. He was the father figure incarnate. It didn't seem to matter if you had a good dad or a bad dad--Bernie, with his twinkly eyes and mafia-style cigar, was the Big Daddy now. Although quick thinkers and nimble wits were drawn to Second City's stage, so were hordes of natural mimics. They all "did" Bernie. I'm sure he knew, sure he laughed, sure he got tired of it.

I went to Second City workshops with Del Close where I met Tim Kazurinsky and started to learn to think on my feet. We learned traditional improvisation techniques designed to tap our natural responses, our story-telling instincts. We learned to construct stories together. Once in awhile we noticed Bernie in the back of the room, just watching, or smiling. Or not.

I was cast in the touring company and for a couple of years our troop played for colleges around the Midwest. Judy Stone and I were always slated to do the improv section at the end of the show. Performing without a net in front of 5,000 college kids is pretty scary. But when they laughed, it was a wave that built and crested and washed over us with acceptance and respect. That's really all any of us wanted anyway.

I was touring on weekends and working Monday nights on Second City's main stage. It was real-life training for the big leagues. We were like 8th graders and the regular cast were the seniors. I had a small child at home and I was staying out too late too often. I summoned up all the courage I could and went to see Bernie. "I just don't think I want to do this anymore," I said. "I really want to be a writer."

'"Mmmm," he said, taking a big drag of his cigar, "You realized you're not sick and neurotic enough to be an actress." I hadn't really thought of it that way, but, yeah.

I was working for the Chicago Reader at the time, writing stories. "Why don't you hire me for what they pay me?" I said., "to write."

And then I was, a regular in "the writers' room". When "My Bodyguard" came to Second City looking for help on the script, Bernie assigned Tim and me to work on it and we learned how to write screenplays on the job. When I had an idea for a movie about the first woman private eye, Bernie hired Pat Colander and I to write the screenplay. When David Mamet's "Sexual Perversity In Chicago" was having script troubles, Bernie again assigned Tim Kazurinsky and me to start the rewrites.

And the days drifted down. It's so trite, but what's past seems like yesterday. One day, sitting in the writers' room, Bernie looked out the window and thought about that night's show at his Second City night club. The snowflakes fell, one-by-one, faster and faster. Traffic was going to be pretty bad by curtain time. "Every one of those snowflakes," he mused, "every single one of those snowflakes is costing me a dollar." He was, after all, extremely successful in show business.

‘The Butler’ serves up mystery, laughs

"The Butler Did It" continues to Oct. 17 at Beatniks on Conkey.

"How to Succeed in Business Without Really Trying" runs through Oct. 10 at The Drama Group.

Pictured are Tim Kazurinsky, Mary Gross and George Wendt in a scene from a sitcom pilot that Sahlins directed that was shot at the house Denise DeClue lived in on Paulina in Chicago during the 1970s.