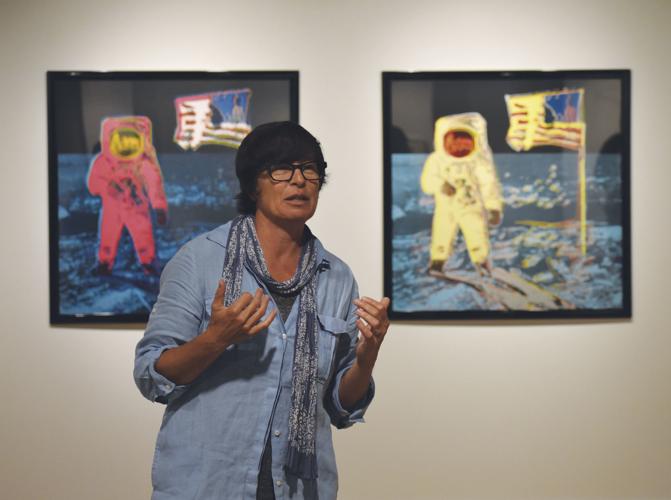 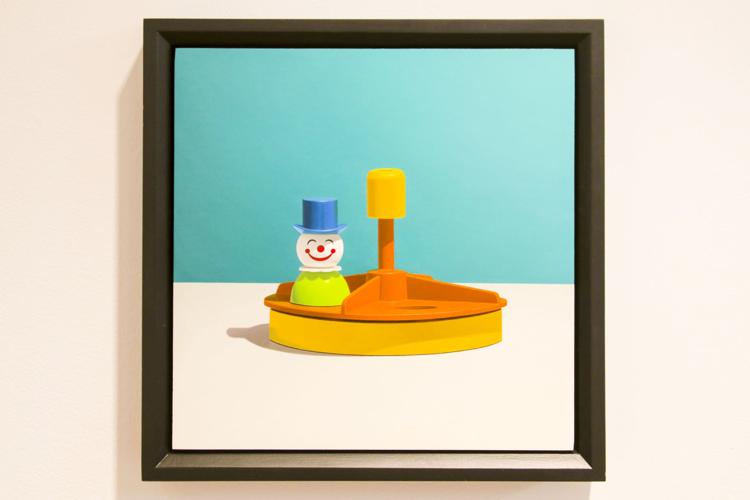 The "Spinning Clown" painting by Christopher Cosnowski is on display at Lubeznik Center. Its inspirations are akin to Warhol's work. 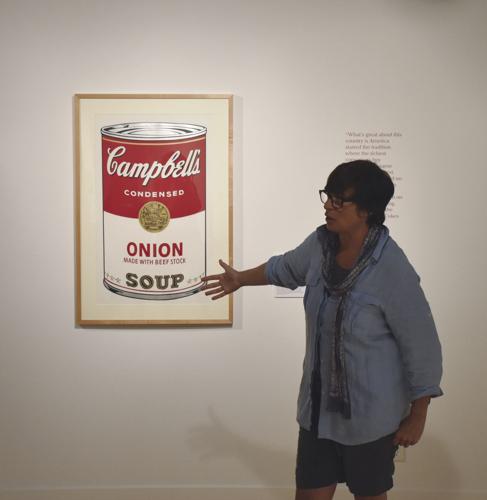 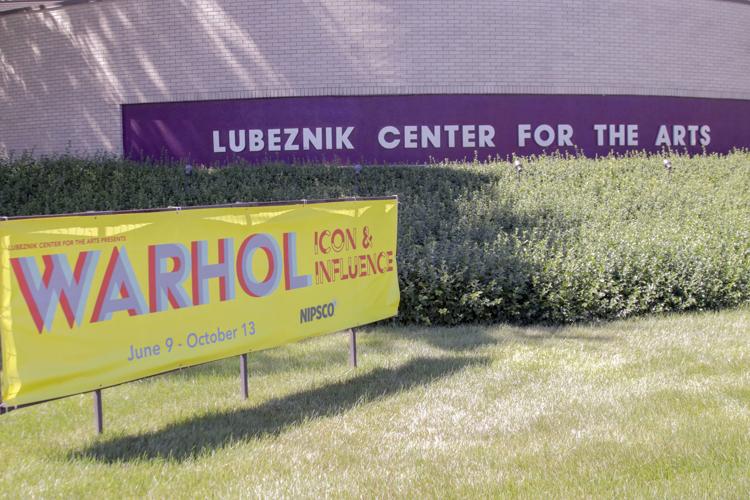 To those in the know, the significance of Andy Warhol comes with a variety of interpretations.

His “everyone will be world famous for 15 minutes” has become a go-to for writers and pundits ever since Warhol was credited with the phrase a half century ago. To art aficionados, Warhol’s paintings and graphic designs are the pioneering works of the pop art movement of the mid-20th Century.

Warhol’s influence on film and music cannot be underestimated either. Experimental Warhol-helmed movies from the '60s and '70s such as “Heat,” “Vinyl” and “Camp” have influenced generations of directors and his championing of The Velvet Underground would leave a lasting impression on the rock world.

To St. Charles-based artist Dominic Sansone, whose works are featured alongside Warhol’s as part of Michigan City’s Lubeznik Center for the Arts’ “Warhol: Icon & Influence” exhibit, Warhol’s art is secondary to his business acumen.

“I admire and respect what he accomplished in terms of thinking of fine art and making it more of a commodity, and the way he went about his mass produced approach to artwork,” Sansone said. “I think those are the enduring qualities of his legacy, how he took his commercial art background and translated that into becoming one of the most known and respected artists in the world.”

More than 50 original Warhol creations, running the gamut from screen prints, Polaroids and black and white photographs, make up “Warhol.” The exhibit will be celebrated with an opening reception July 6 at Lubeznik Center's Hyndman Gallery. Warhol's works are complemented by two- and three-dimensional creations from Sansone and a trio of fellow Chicagoland area artists.

Several of the Warhol originals, which were created from the late '60s up through Warhol’s death in 1987, are on loan from the collection of region-based art connoisseurs Drew and Wendy Levenfeld. Other pieces are part of the permanent collection of Valparaiso University’s Brauer Museum of Art.

Lora Fosberg, Lubeznik Center director of exhibitions, noted that a majority of the pieces that make up the exhibit were created by Warhol in the '80s.

“I really think that, just with this small amount of work that we’re showing, you can really feel the excesses of the '80s through looking at this work,” she said. “I hope that people can understand that art reflects our times and that art is another way of recording history and sharing our mutual attitudes with each other.”

Augmenting the Warhol originals in the Lubeznik Center exhibit are original works from Sansone, who contributed a series of gun sculptures to the show as well as C.J. Hungerman, Christopher Cosnowski and Robyn Day.

“On pop art and graffiti art, he is a massive influence on technique alone, let alone subject matter,” Hungerman said of Warhol’s influence. “All of the graffiti artists take a lot of their cues from Warhol and from Keith Haring, both of whom are strangely enough from Pennsylvania.”

As a whole, Sansone hopes “Warhol” viewers get a sense of the impact the artist/director/tastemaker had on those who have followed in his footsteps.

“Warhol has inspired and influenced the work of a wide variety of artists, and I think that might be the most revealing thing that people haven’t known about Warhol is how he had an impact on a very diverse group of people and their approach to artmaking.”

The inclusion of the foursome’s work alongside Warhol’s pieces, Fosberg said, highlights the profound impact the pop art maestro continues to have today.

“(Warhol) is still affecting artists to this day and (the exhibit) is proof positive of his incredible influence on artists all over the world,” she said.

Since its opening last month, “Warhol” has proven a hit with art aficionados in and beyond the Region. Fosberg described the public response to the show as “overwhelmingly positive, thrilling, in fact.”

“Our mandate now is to elevate the artwork that we’ve been showing,” she said. “In the past we’ve shown lots of regional work by established people, which is great. But we feel like we can do even more. While showing regional (artists), we can show other established artwork that hasn’t been brought to Michigan City, things you find in Chicago. We don’t see any reason why we can’t do that, too.”

“This is the kickoff to a new era, we hope, for the Lubneznik Center,” she added.”

“Warhol: Icon & Influence” is scheduled to run at Lubeznik Center’s Hyndman Gallery, , 101 W. 2nd St., Michigan City through Oct. 13. Also running at Lubeznik Center is “High Maintenance,” a collection of works created by Windy City-based artists Yvette Mayorga. A reception for her show is also scheduled for 5 p.m. July 6. Lubeznik Center for the Arts is open 10 a.m. to 5 p.m. Monday through Wednesday and Friday, 10 a.m. through 7 p.m. Thursdays through Labor Day and 11 a.m. to 4 p.m. Saturday and Sunday. Opening reception for “Warhol: Icon & Influence” is at 5 p.m. July 6. Admission is free. Call 219-874-4900 or visit LUBEZNIKCENTER.ORG

'Pianos in the Parks' returns to Chicago until Aug. 1

Eddie Murphy insists he never 'made fun' of Michael Jackson

Eddie Murphy insists he never 'made fun' of Michael Jackson

The "Spinning Clown" painting by Christopher Cosnowski is on display at Lubeznik Center. Its inspirations are akin to Warhol's work.