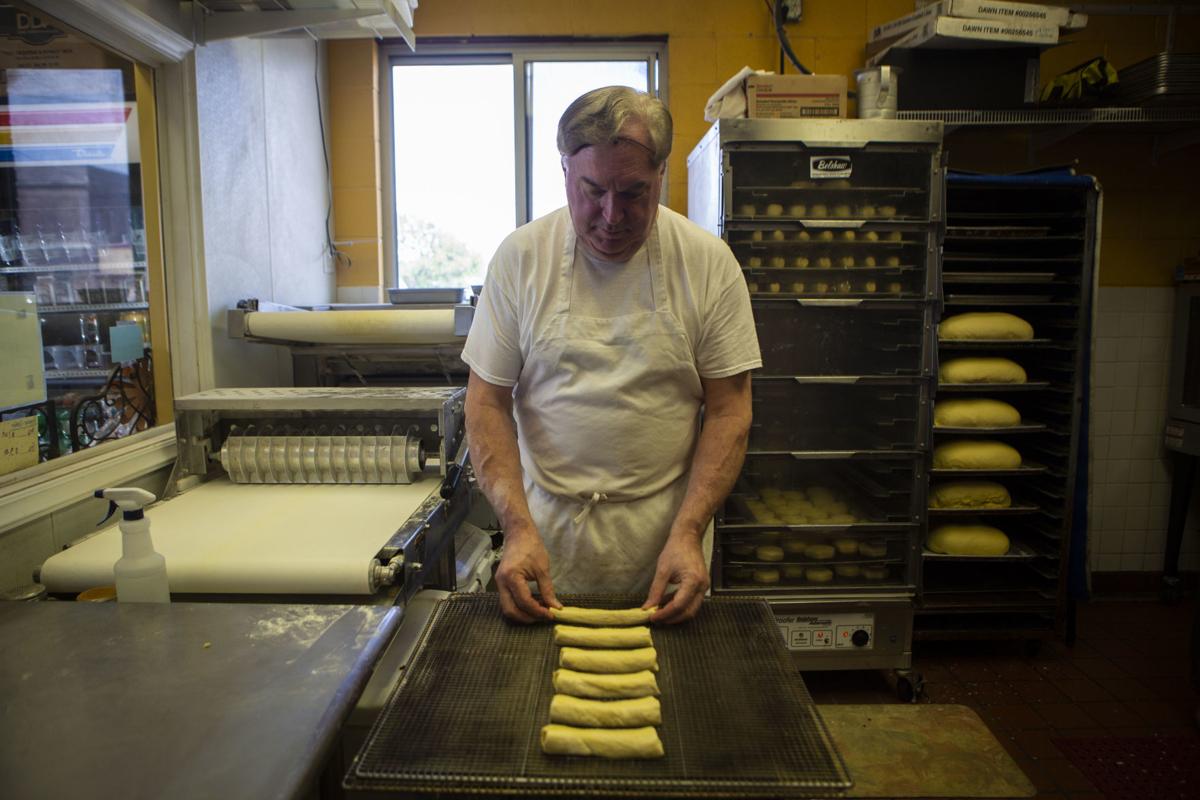 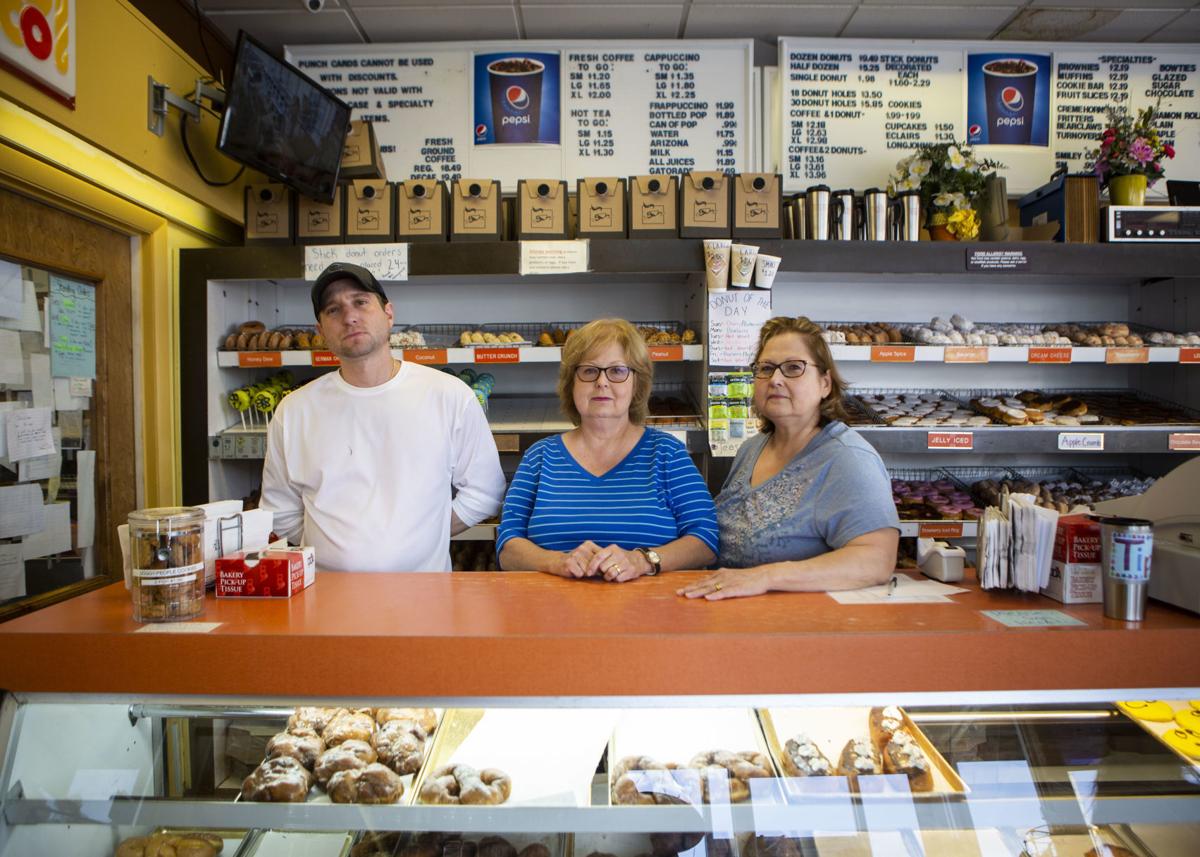 Jeff Shimke, from left, Elaine Butynski and JoEllen Aleksandrovich stand behind the counter of Munster Donut. The doughnut shop, which is mostly family run, is turning 50 later this year. 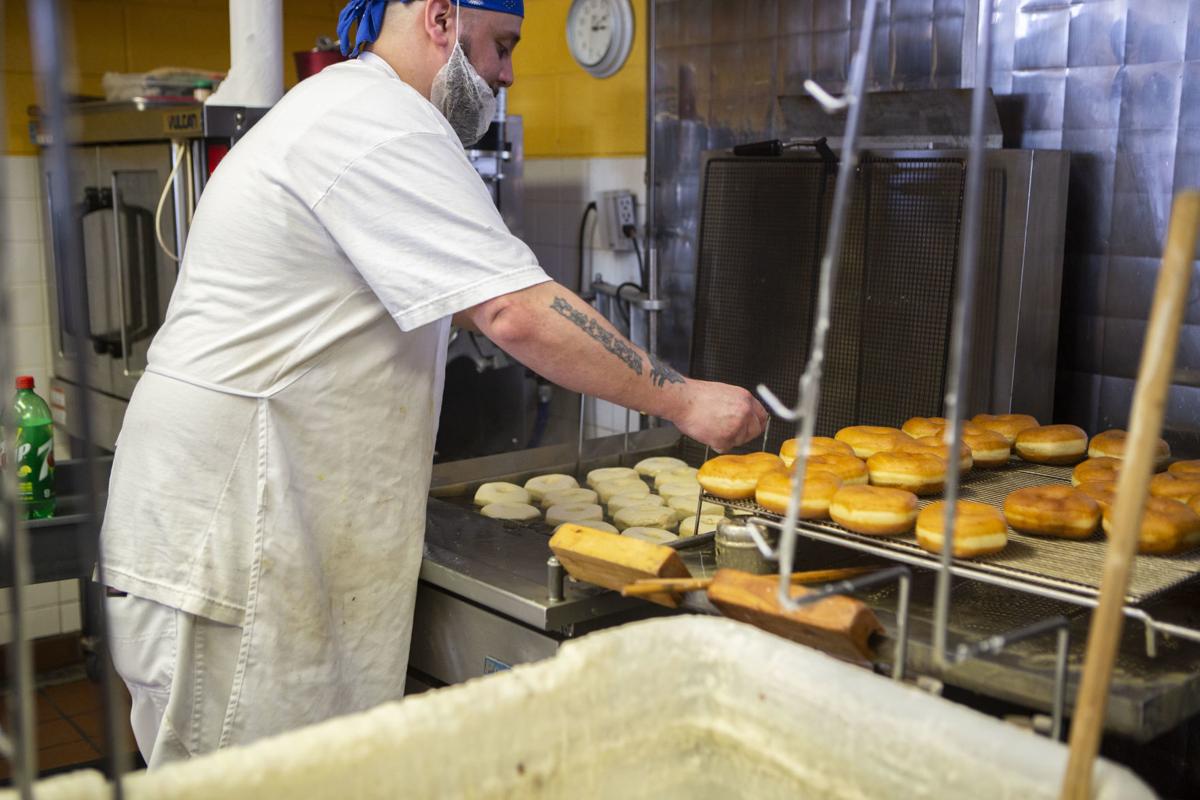 Greg Marquez fries doughnuts Thursday at Monster Donut in Munster. The business is celebrating its 50th anniversary this year. 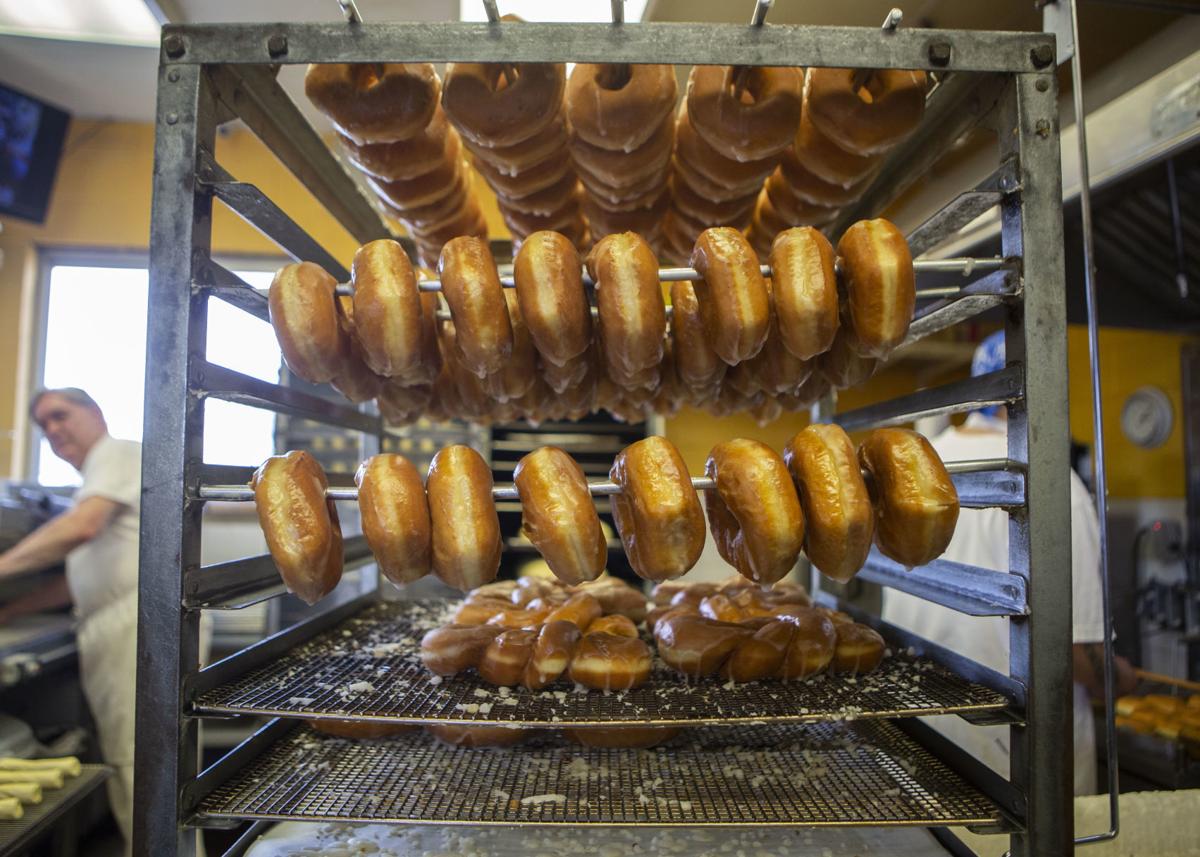 Donuts dry on racks in the kitchen of Munster Donut on Thursday in Munster. The doughnut business is celebrating its 50th anniversary this year. 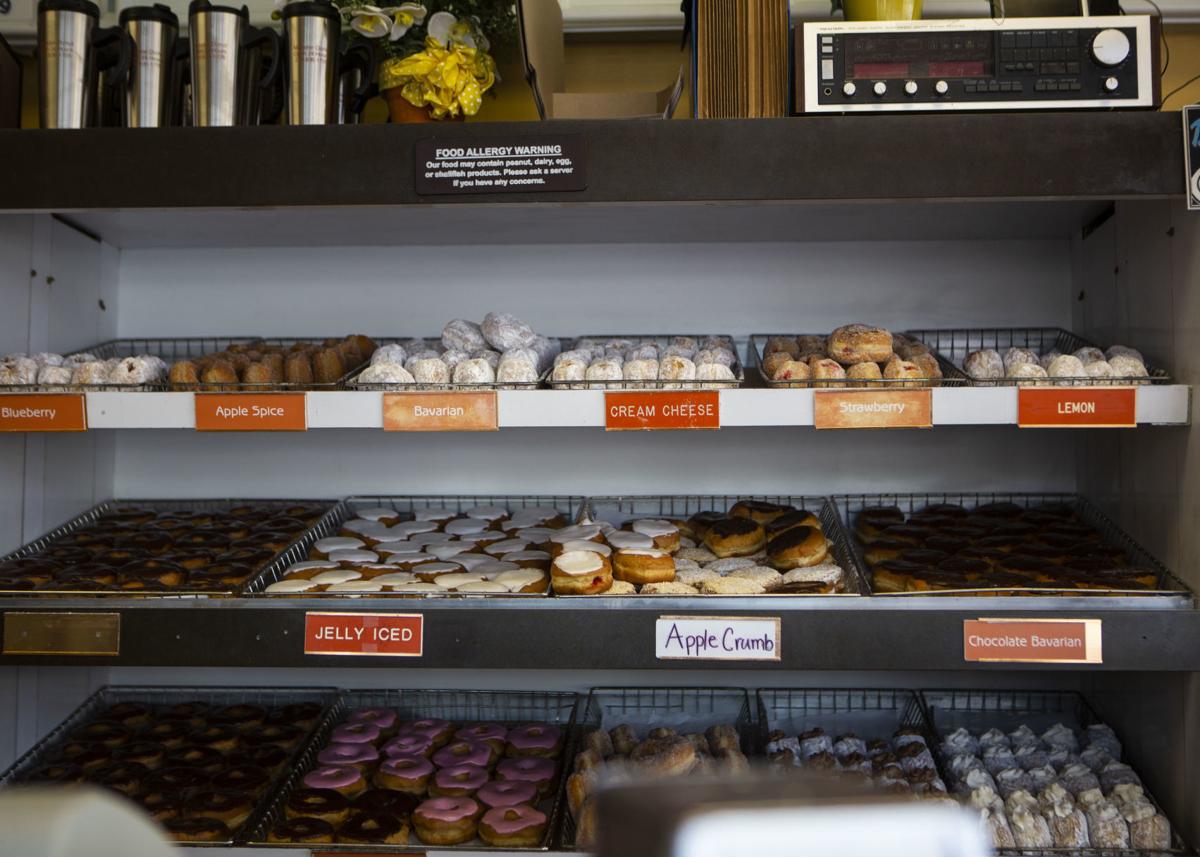 Dozens of different types of doughnuts are on display Thursday at Munster Donut in Munster. The business is open 24 hours a day.

The vintage 24/7 mom-and-pop doughnut shop at 8314 Calumet Ave. opened as Mister Donut when the now-mature suburb of Munster still had vacant lots and farmland. Munster Donut has since endured recessions, a robbery, an effort by corporate Goliath Dunkin' Donuts to buy it out, a Dunkin' Donuts opening just across the street, and a couple of cars crashing into the building.

But the old school doughnut shop with the glass cases and lunch counter stools has survived for a half-century.

Munster Donut was built in December of 1969 and will celebrate its 50th anniversary later this year.

"We have a lot of regulars come in," said co-owner Elaine Butynski, who owns the business along with her sister Jo Ellen Aleksandrovich. "When you see somebody every day 300 days a year, you become very attached to those people. We've been to a lot of wakes that are heartbreaking to us. They're like losing an uncle or a cousin. It's just terrible but it's because we have been there so long."

Munster Donut has served its rich cake doughnuts — a little crispy on the outside and moist on the inside — to generations of Region residents. They've been enjoyed by steelworkers at the end of a long shift, at many offices, by people out at odd hours, and at and many wedding receptions. Police officers hang out at Munster Donut and nurse coffee during the wee hours, seniors set up shop in the corner for morning coffee-klatches where they solve the problems of the world, and families hit it up after church.

The smell of sweet, fresh-baked doughnuts hits you before you even walk in the door.

The original owner, Don Colman, opened the business as part of the now-defunct Mister Donut chain, which was bought out by Dunkin' Donuts in 1990. Most of the old Mister Donut stores converted, but Colman refused, went independent and rebranded the store as Munster Donut.

He still works at the shop two days a week though he's in his 80s. He sold the business back in the year 2000 to longtime employees Butynski and Aleksandrovich, who's been working there since she turned 15. Butynski started out waiting on customers at the counter, got promoted to finishing the doughnuts with icing, and graduated to doing the baking.

"We had known all the customers when we started working at the counter, from young men to older men," Butynski said. "Customers who have been coming here since they were kids have now come in with their children. We really have gotten to know our customer base."

Munster has changed a lot since Butynski's family moved there from North Hammond when she was 12 years old.

"When we moved here, there was nothing, just the Burger King," she said. "We've seen the transition. It was empty lots everywhere when we moved in. We have seen it progress. We've seen the hospital come in and it grow to what it is now. We like Munster. We like being close to the grocery store, to churches, to the Theatre at the Center. It's home."

Munster Donut tries to stay involved in the community, donating charity baskets to local churches, Catholic fundraisers and the Humane Society of Northwest Indiana. The community has stuck with Munster Donut, even as tastes evolved to prefer fancier coffees than the light roast it serves, and as schedules have gotten so fast-paced many people prefer drive-throughs.

Dunkin' Donuts moved right across the street in 2004, which Munster Donut fought against at the time.

"When they first opened, we had a few rough years," Butynski said. "We did what we needed to do and didn't take a paycheck a few times. But we stuck with it, thinking people would be back, and they were."

The David-vs.-Goliath scenario even energized some customers.

"It was hometown shop against a big business," she said. "Customers said they were sorry for us, and hoped we'd survive. Some people came in and said they didn't even like doughnuts but wanted a dozen."

Munster Donut's coffee has always had a base of loyalists, but it isn't as strong and robust as Dunkin's coffee.

"We don't do the same coffee business anymore, but that's all right," Butynski said.

Munster Donut focuses just on hand-made doughnuts, such as the top-selling honey dip, chocolate, chocolate Bavarian, and chocolate sour cream. It carries a wide array of doughnuts, including seasonal specials like key lime and s'mores in the summer and pumpkin in the fall.

"We make all the doughnuts here," she said. "Everything's made on the premises, including the maple icing and the chocolate icing. It's a hard and long process. A machine doesn't do it. It's all us."

They stress quality because of how their Polish mother made them "put a dish back in the sink 100 times until it was perfect."

"We try to be meticulous," she said. "We tell our employees to treat the doughnuts as if they were boxing them up for their own home. You want perfectly boxed doughnuts, not for them to be smashed or for the icing to come off. We take the time to box our doughnuts correctly because we're proud of our doughnuts."

The night shift starts baking the next day's batch of doughnuts at about 9 p.m. every night and bakes all night. The day shift keeps baking when it takes over, sometimes until 5 p.m. on the busiest days: Friday, Saturday, Sunday and sometimes Thursday.

"More people are out then," she said. "Friday is busy because it's often treat day at the office."

While some Region restaurants are open around the clock to cater to factory workers who get off at odd hours in the heavily industrial Northwest Indiana, Munster Donut stays open 24/7 mainly because people are always working there anyway.

"That started with Mister Donut," she said. "People got accustomed to it, so we kept those hours. If employees are here baking on the night shift, someone can come to the counter."

The expectation that Munster Donut will always be open does make it difficult to do maintenance projects, such as new flooring that was installed last week. The shop is forced to close, and that can alarm some customers.

Most famously, Munster Donut closed after being hit by cars in 2014 and then again in 2016.

"A lot of people who read about that came in, saying they didn't even know we existed," Butynski said. "It brought in a lot of new customers, including from Illinois. It was the biggest increase to our business."

Munster Donut continues to find new customers, who come in from as far as Chicago and Southwest Michigan. 3 Floyds' brand new distillery taproom offers a sour cream Munster Donut dessert that can be topped with either whiskey caramel or rum buttercream dip, and the topping of either pecan, pretzel or chocolate crunch.

"I do like making doughnuts," she said. "It's a little niche for me and those of us who work here."

The sisters hope to eventually turn the business over to a nephew to keep it going for the next generation and protect the jobs.

"We don't want to sell to someone we don't know because they bring in their own people and want to start fresh," Butynski said. "We've put in blood, sweat and tears so we'd like it to stay in the family. That's the long-term vision, but I'm not planning on leaving anytime soon."

She and her sister have been thinking about ways Munster Donut can celebrate the anniversary in December, possibly with a sale or some other promotion. Butynski said she's just grateful Munster Donut has become such an institution in the community.

"People who move away tell us they always have to get White Castle and Munster Donut when they come home," she said.

Police are looking for a suspicious man who reportedly approached children at Griffith's Central Park Monday, calling one to come to him and a…

Indiana is fining the ArcelorMittal Indiana Harbor steel mill in East Chicago $10,000 for safety violations after steelworkers were allegedly …

You can again watch Munster's annual Independence Day fireworks in style while sipping some of the world's best and "not normal" craft beer.

More new retail is coming to south Munster, which has seen a boom in new development along Calumet Avenue in recent years.

Munster Donut to reopen next week

After nearly a month's closure, the beloved Region institution Munster Donut will come back to provide the masses with fresh glazed donuts, do…

Munster Donut forced to close for third time this year

It's been a rough year for one of the Region's most popular doughnut shops.Munster Donut was forced to close because of an emergency Monday fo…

Munster Donut reopens after second car crashes into it

Even water damage and a few tons of metal smashing through the glass storefront can't stop a good doughnut.

Munster Donut closed again after another car crashes into it

A helicopter transported a driver who was entrapped and injured in a two-car crash in Porter County.

The Splant family never "forgot the health care team who helped make their dream of having a child a reality."

Jeff Shimke, from left, Elaine Butynski and JoEllen Aleksandrovich stand behind the counter of Munster Donut. The doughnut shop, which is mostly family run, is turning 50 later this year.

Greg Marquez fries doughnuts Thursday at Monster Donut in Munster. The business is celebrating its 50th anniversary this year.

Donuts dry on racks in the kitchen of Munster Donut on Thursday in Munster. The doughnut business is celebrating its 50th anniversary this year.

Dozens of different types of doughnuts are on display Thursday at Munster Donut in Munster. The business is open 24 hours a day.