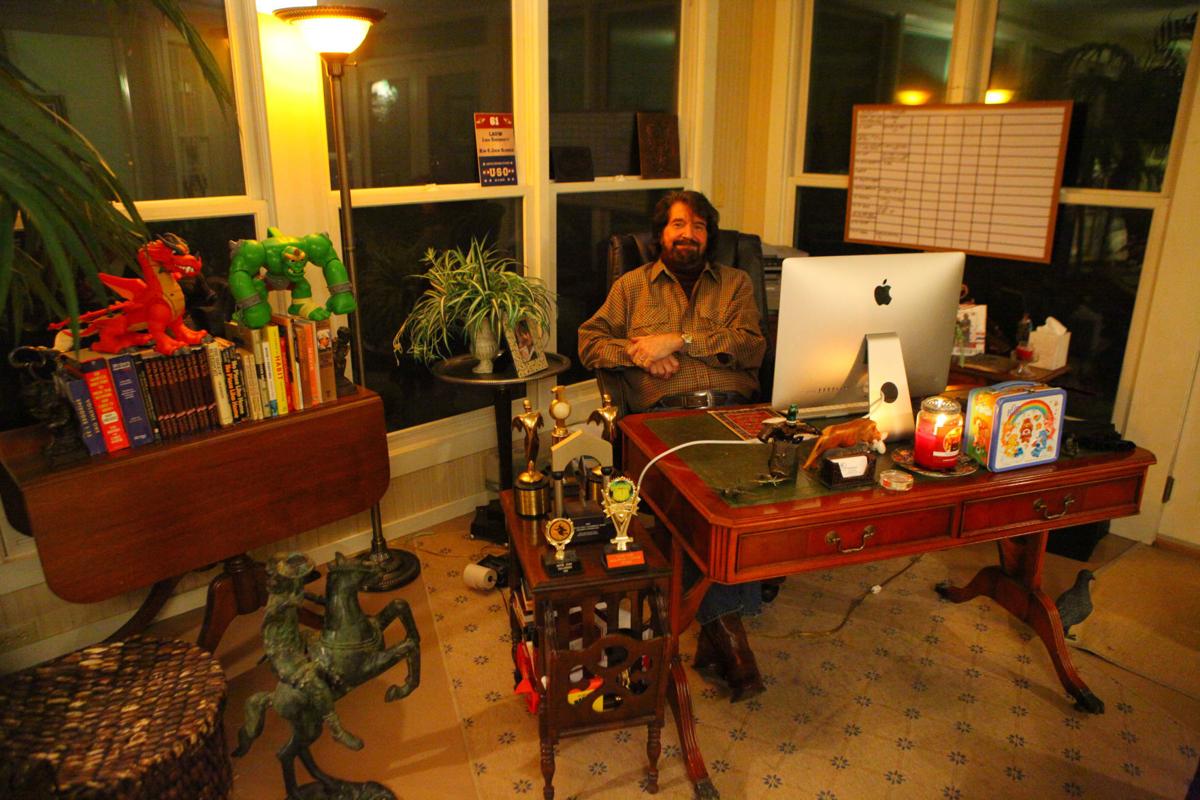 Jack Olesker, of Long Beach, is pictured inside his study at his home, surrounded by some of his memorabilia, including a Care Bears lunchbox. 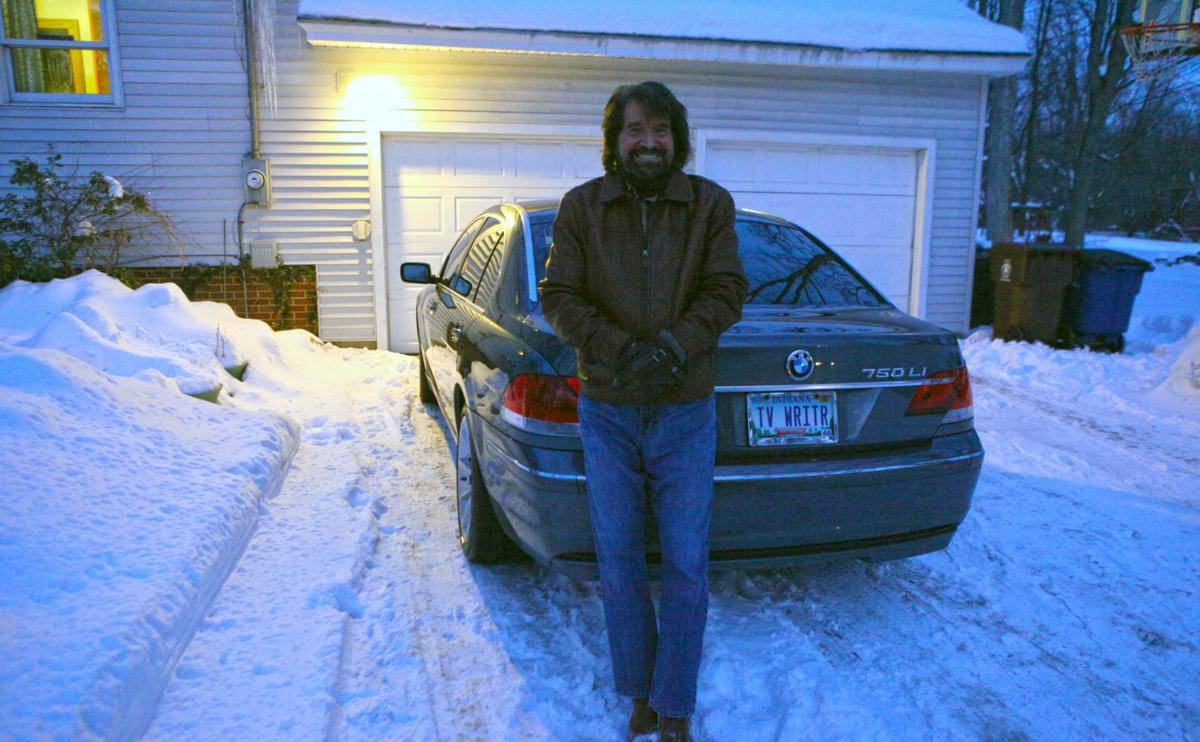 Jack Olesker, of Long Beach, poses outside his home with his car that dons a license plate reading "TV WRITR."

LONG BEACH — When he was in his 20s, if you had told Jack Olesker he would end up writing for popular children's television, he might not have believed you.

The newly published writer had earned approval from G.P. Putnam's Sons in 1976 after delivering a copy of his novel, "No Place Like Home," in a shirt box. MGM Studios eventually bought the film rights.

Olesker was enjoying the high life, driving a Mercedes-Benz and living in Chicago's iconic Lake Point Tower. He was an Air Force veteran, and had graduated from working in his parents clothing store on State Street to being a manager.

He feels those working-class roots and growing up in the South Shore neighborhood helped make him who he was.

"When it came to business, he (my father) was always fair," Olesker said, "but he was the toughest businessman you met in your entire life. He told me, 'You must struggle.' I understand what it means. It's the agony and the ecstasy. If you don't have struggles, how can you possibly enjoy the success?"

Olesker said that although his parents didn't excel in their own education, he remembers them as "voracious" readers, plowing through two or three books a week if possible. He said he has fond memories going to the Chicago Public Library with his mother.

Eventually, Olesker found a desire in his heart to be the one crafting words onto pages. As a student in Chicago Harvard School, he credits two English language teachers, Jerri Clapper and Carol Stein, for teaching him composition and grammar, respectively.

"It was like the vault door opened for me," Olesker said. "I was fortunate to have one that gave me the freedom of the English language and one that taught me the discipline."

Fast forward back to the 1970s, and Olesker set his sights on Los Angeles. He said at the time he felt he had "golden fingers" and would make it big in the melting pot of thousands of writers searching for opportunities.

Eventually, a door opened when he met Jean Chalopin, who had founded DiC Entertainment. Olesker earned work by writing scripts for "The Littles."

Further along, Olesker earned opportunities as a story editor for "The Care Bears" and as a co-developer for "Mighty Morphin' Power Rangers" with Fox and Saban Entertainment. For a writer that had published murder mystery novels, these storylines and characters were a contrast — but he found it to be his true calling.

"I could've gone into any particular area," Olesker said. "To see a child's eyes light up, to see them say, 'I love that show,' they're so honest."

Olesker would spend 19 years in Los Angeles, going on to participate in more productions, including "The Three Musketeers," "Heidi," "Pocahontas" and "Aladdin." By his count, presently he's had his hand in about 1,200 TV episodes and 18 movies. His novel count is up to six.

He met his wife, Kim Olesker, the CEO of United Way of Porter County, while in the Bahamas. No matter what, he said his heart always held a love for Northwest Indiana, whether during his time growing up or when his parents eventually had a home in Michiana Shores.

His own decision to move to Long Beach came when he took his son, Alex, out to see the beach and Lake Michigan during a winter in LaPorte County. Alex, after taking a look at the frozen expanse of the lake and the surrounding beach and woods, said "Daddy, it's like a great, big playground."

"I love NWI so much," Olesker said. "There's such a homogeneity of values. I believe it transcends racial, social and religious values. There's a strong sense of family. You can give me the Empire State Building with all the payments made, I'd tell you, 'Thank you very much, but I love my Northwest Indiana.'"

Now as a Region resident, Olesker began his own production company, 24/7 Productions, which has projects in the works, including a deal with PBS and Lakeshore Public Media.

Even Olesker's two youngest children, Zoe and Max, have wanted to make their way into the world of TV and film production. Olesker's oldest, Alex, went the science route as an engineering student at Purdue University. He warns though the industry, then and now, is cutthroat.

"It's very hard work," Olesker said. "You have to have a passion in you that says, 'I cannot not write.' This business will break your heart. Your guts better be made out of raw iron. You're creating something that you're putting so much of yourself into. You get turned down, and part of you can't help but take it personally. Everyone remembers Babe Ruth hitting all those home runs. But he struck out a number of times."

But his true reward, he maintains, has always been about the kids: whether it's been making fans' faces light up or being an inclusive neighbor with local schoolkids.

Olesker recalled an instance when he met a fan of the "Care Bears." By his recollection, she said, "All week long (growing up), I waited for the 'Care Bears.' It was my oasis. I want to thank you for saving my childhood."

"When this girl said this to me, it touched my heart," Olesker said. "To touch people's lives is the most wonderful thing of all. My truism is we (writers) are all nothing without fans. So it's the fans that we owe our gratitude."

'Listen to Your Mother' returns to NWI: Audition spots open to share stories about moms

The paths that led them to the sport varied, but four of the surfboarders who participating in the Surfrider Foundation's lawsuit against U.S.…

GARY — Antuwan Clemons may not have the resources of Oprah Winfrey, but the Gary resident is planning to start up his own national network wit…

Felicia Hall describes herself as energetic, positive, loud and lively. Those traits helped her become a contestant on "The Price is Right" th…

Jack Olesker, of Long Beach, is pictured inside his study at his home, surrounded by some of his memorabilia, including a Care Bears lunchbox.

Jack Olesker, of Long Beach, poses outside his home with his car that dons a license plate reading "TV WRITR."