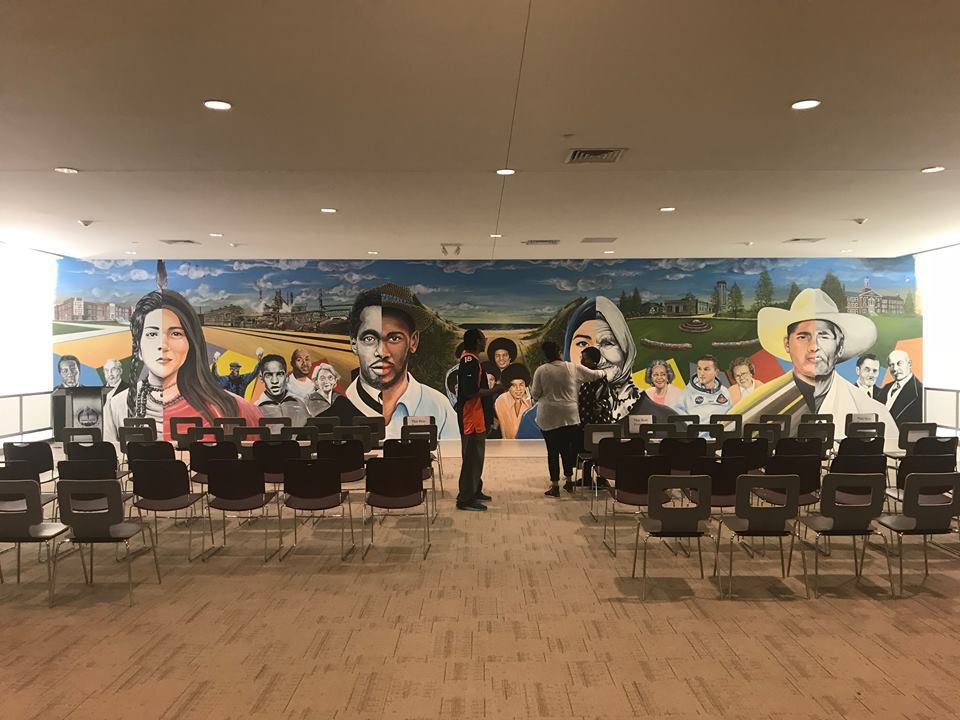 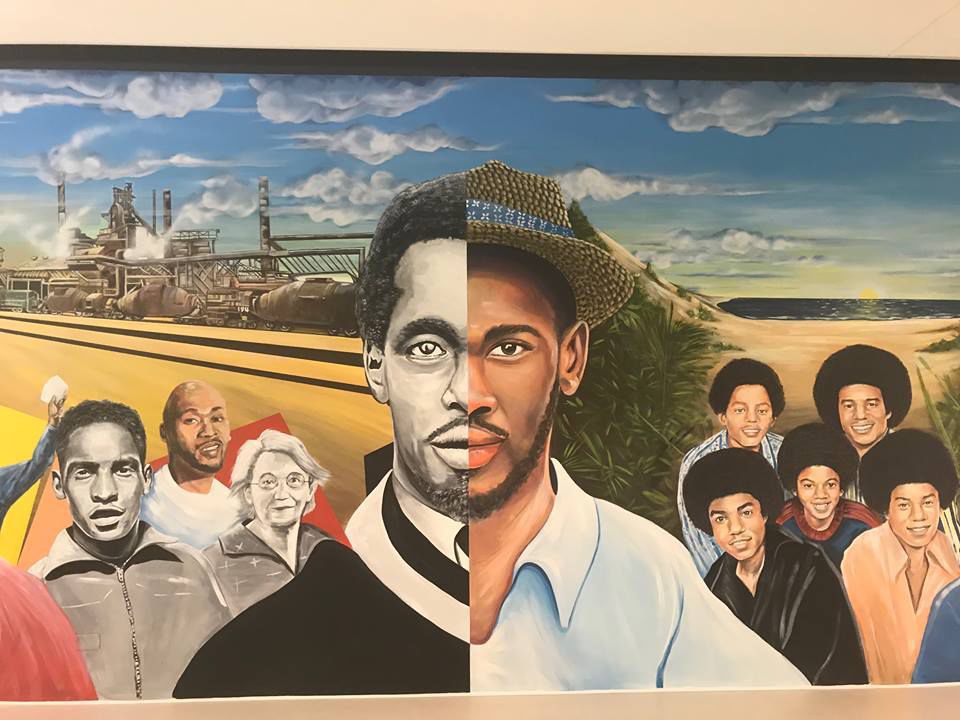 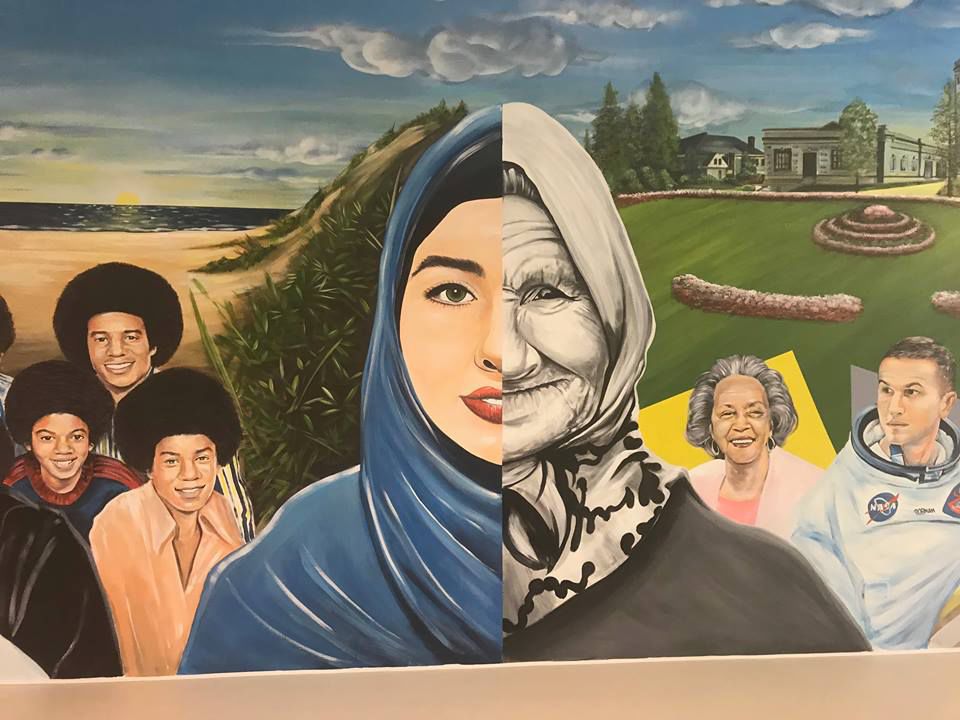 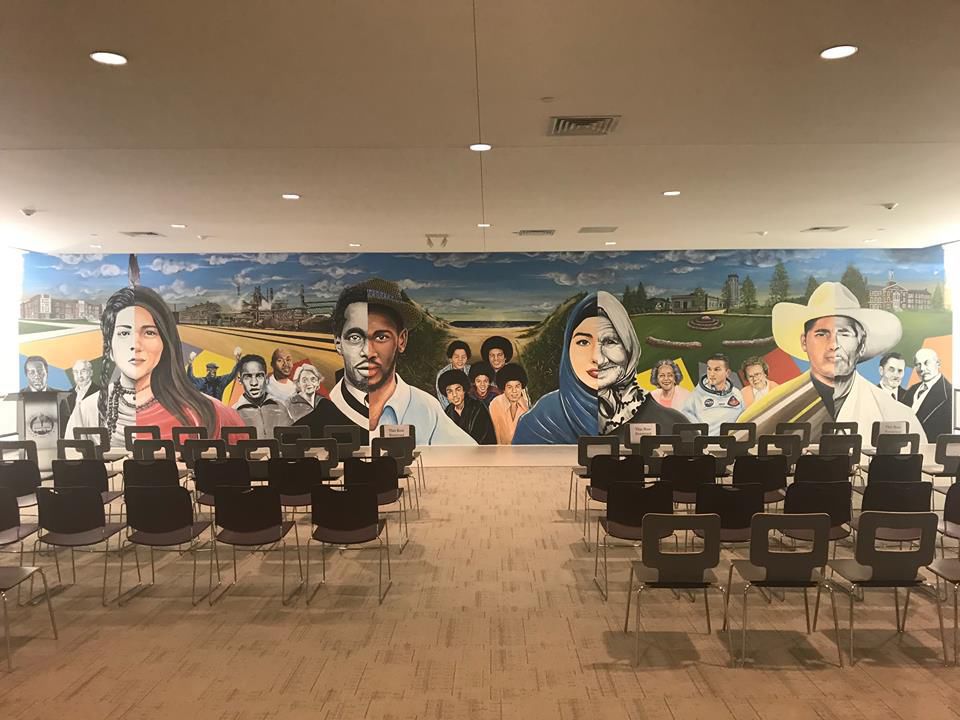 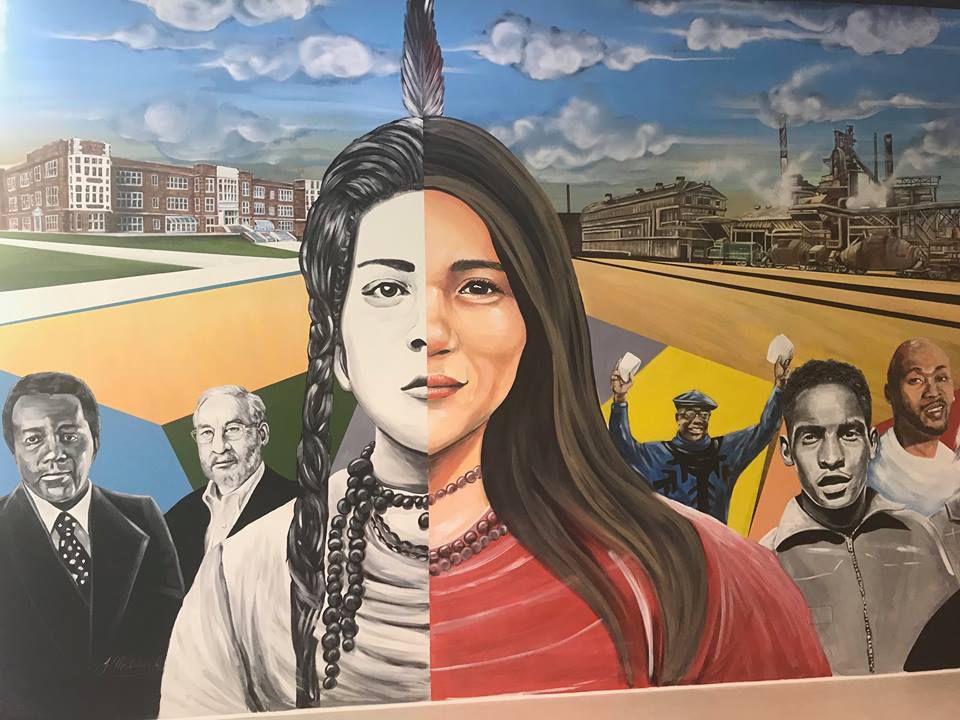 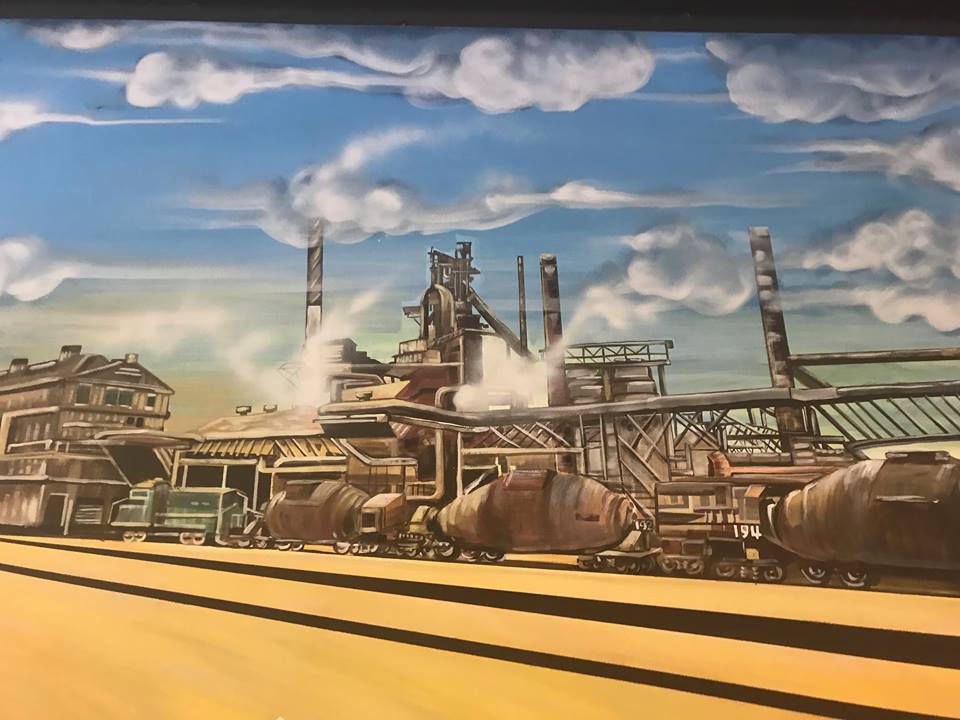 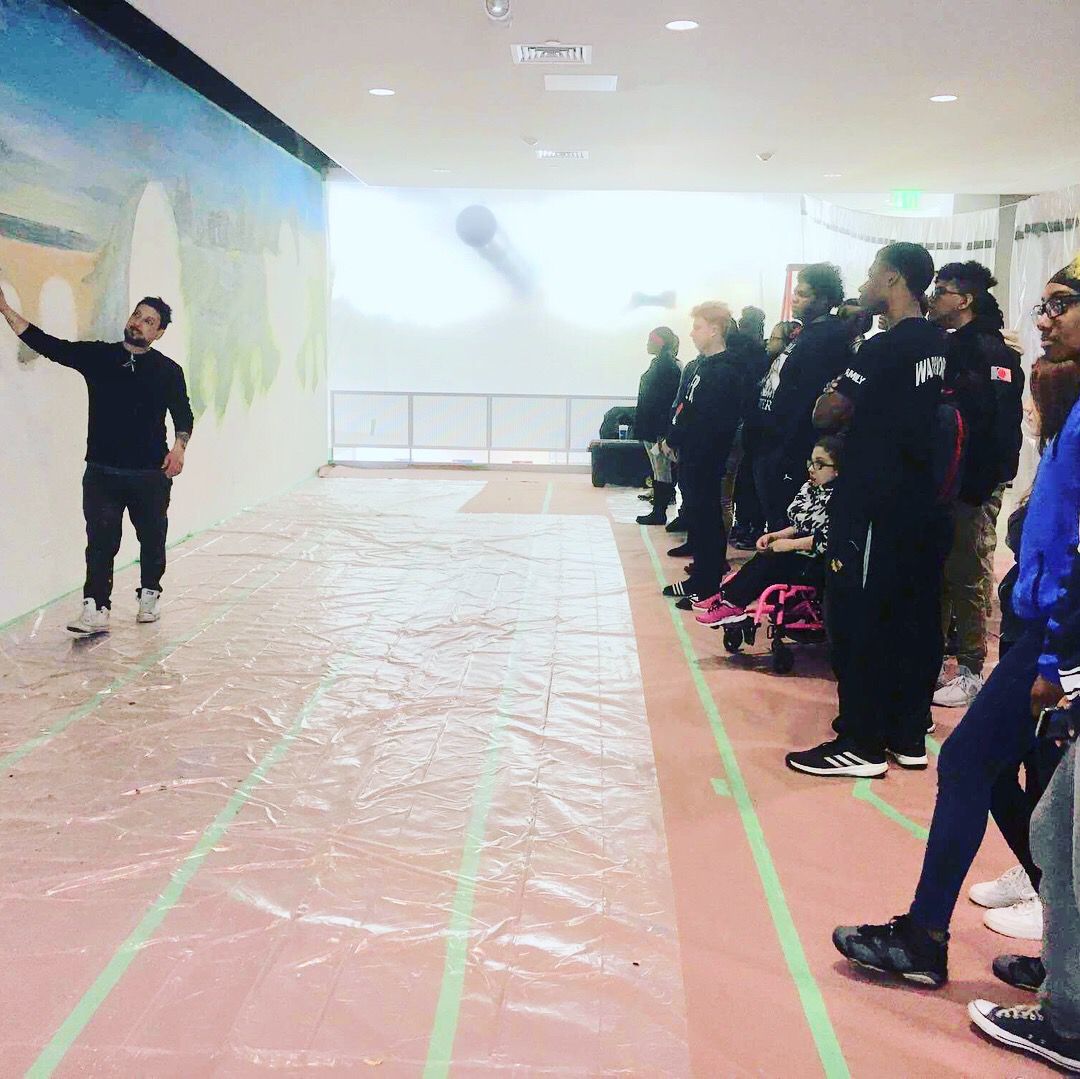 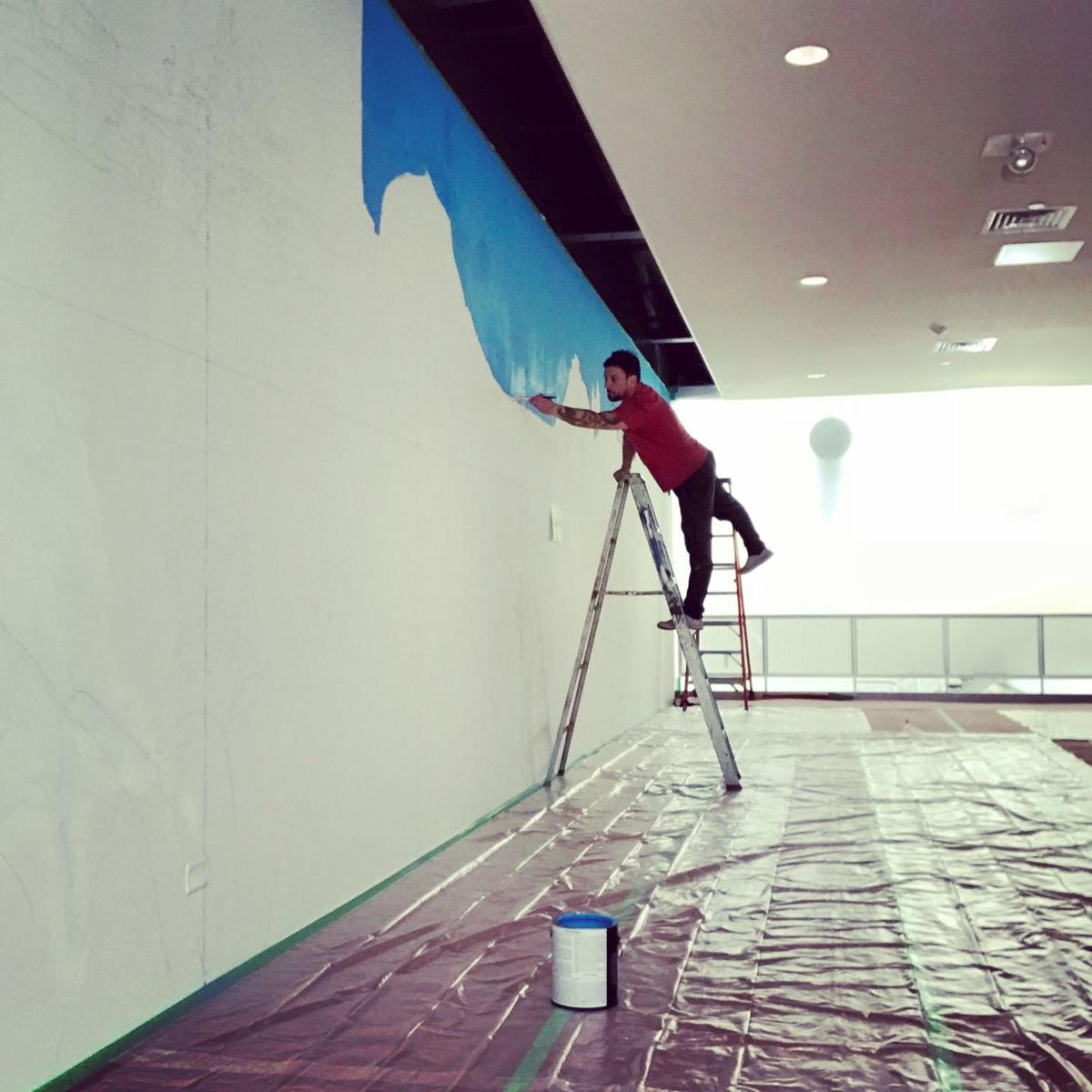 An acclaimed street artist worked for months to create an epic mural about Gary’s history and culture at the Gary Public Library and Cultural Center downtown, and now it's on display for the public to see.

East Chicago graffiti artist Felix “Flex” Maldonado , the founder of CISA Studio, an affiliate of the Crazy IN Style Artists crew and an advertising industry vet, painted a sweeping historic mural on the second floor of the recently reopened library at 220 W. 5th Avenue in downtown Gary. The 12-foot-by-50-foot piece features all the major ethnic groups that have called the Steel City home, a half dozen landmarks such as the dunes and steel mills, and 20 historic figures like pioneering mayor Richard Hatcher, astronaut Frank Borman, city historian Dolly Millender and "Peanut Man" Joe Hays, the corner peanut salesman who entertained motorists for decades with juggling, balancing things on his chin and other stunts.

The library unveiled the mural Saturday.

“It was overwhelming, a big task,” Maldonado said. “It took two months, and it includes 20 to 25 faces. I’ve never done so many faces before. I was under the gun, under pressure. Some of them are still alive, and their relatives have come by to critique it or say I did a good job.”

“The library had the idea of a mural with 20 individuals that would be very inclusive of every culture that has graced this city, and that’s very positive and that brings us all together,” Gary Public Library Board President Tyrell Anderson said. “The library had the idea and brought it to us, the board. We reached out to Flex, who’s pretty big in this area. Most of those guys drive home past his Jackson 5 piece, and it really resonated with them, so we reached out to him.”

He said Maldonado’s final product – a sweeping panoramic of Gary's waves of settlement, Nobel Prize winners and sports heroes – turned out to be a beautiful piece that would resonate with many.

“Gary is often portrayed as one-dimensional,” he said. “We hope people take away that it’s a great place with great beginnings, many positives and a great future ahead. It’s more than just the lakefront. It’s a great culture of people who want the city to be great and to make it a great place.”

The mural is located next to a gallery space on the upper floor of the library, where various local artists will be displayed. The downtown library now doubles as a cultural center since reopening earlier this year.

“We’re just fortunate to be hanging the work of someone of his caliber, and for him to want to leave his mark,” Anderson said. “We want to put our stamp on the building and continue to have great local artists. While there are a ton of galleries in the surrounding area, we always want to have art on display downtown. We want to display the work of similar artists who live here, to keep culture present. We’ll have more art installations to come, public art and functional art.”

The newly renovated library also has the Steel City Hall of Fame, a wall of plaques describing the accomplishments of notable Gary residents, but wanted to do something else to honor prominent Garyites, Gary Public Library Director Diana Morrow said.

"We had so many to choose from, so we really had to narrow it down," she said. "Maybe we'll do more on a different wall. ... We wanted to depict everybody, all the groups that have come through the city, the young and the old. ... To see it on paper and to see it on the wall are two different things. It's gorgeous."

The mural was strategically located next to the Indiana Room, a treasure trove of information about Gary and Northwest Indiana. The hope is that some of the figures or landmarks being depicted on the mural such as Gary namesake Judge Elbert Gary, former NBA All Star Glenn Robinson Jr. or the Jefferson Park Water Tower might provoke viewers' curiosity to learn more about them.

“They started with 40 people and cut it down to 20 people,” Maldonado said. “They have a balance with a few from politics, science, architecture and the arts. It’s a nice healthy mix of people from different walks of life.”

Maldonado painted the background of the mural, sweeping back and forth from side to side, while he worked in the finer details like the portraits and landmarks like Roosevelt High School, the first school built for African-Americans in the city that's now listed on the National Register of Historic Places, or the Froebel School where Frank Sinatra came to try to end a white student strike over integration.

“I had to paint with a brush instead of my usual aerosol cans because the library was already open and there wasn’t enough ventilation,” Maldonado said. “I had to paint in a more traditional way. I did practically the whole mural with a one-inch brush. I beat the hell out of that brush and didn’t notice I was surrounded by several other brushes on the floor.”

Library patrons frequently observed Maldonado as he worked, often while perched on the edge of a ladder.

“I got to meet a lot of people from the city, random people and young students,” he said. “Some asked me for painting advice. Having people coming up to me all the time, I was under pressure. It was something a little more important that I wanted to do correctly.”

Maldonado said he hoped he did his job and gave the library what it wanted. He said he was especially proud of reflecting the culture and different ethnic groups in Gary, and showing how the city's past and future come together.

“I’ve been very honored to do these projects in Gary, a city I’m growing to love more and more,” he said. “It was once a great thriving city, and they want to revitalize this town. It’s a strong, tough town that won’t give up. It’s coming back. The city has a future. I see Gary getting back on its feet. I couldn’t be more proud of Gary at the moment.”

Maldonado’s exhibit “Graffiti aHEAD: A Documentation of the Midwest Graffiti Writers,” which consists of massive portraits of local street artists, also remains on display in the adjoining gallery space through June 30.

Steel imports fall 23.2 percent in May

Steel imports fell 23.2 percent to 2.88 million tons in May, as the Section 232 tariffs drove up the price of imported steel by 25 percent.

BESS Art Exposure is planning a number of new exhibits featuring local artists this summer, and you'll only have a short two-week window to se…

Permit applications for steel imports fell 3.7 percent year-over-year in June to 2.89 million net tons, which was a 0.3 percent increase over …

The Rev. Al Sharpton keeps it real in Gary

GARY — The Rev. Al Sharpton, an outspoken preacher and civil rights activist who is famous for leading the fight against racial prejudice and …

Indiana University Northwest created a new School of the Arts that will encompass the Departments of Fine Arts, Performing Arts and Communicat…

Anyone hunting for unique holiday gifts for friends and family should head to downtown Hammond Thursday night.

Gary was, of course, home to the Jackson 5, and now the city is celebrating it in towering fashion.

Graffiti artists will be painting live Saturday in downtown Hammond for the 2016 Hammond Art Tour, when galleries across the city will open th…

A century ago, Army troops imposed martial law in Gary during a strike that helped end the 12-hour workday

A century ago, federal troops occupied downtown Gary during the Steel Strike of 1919.