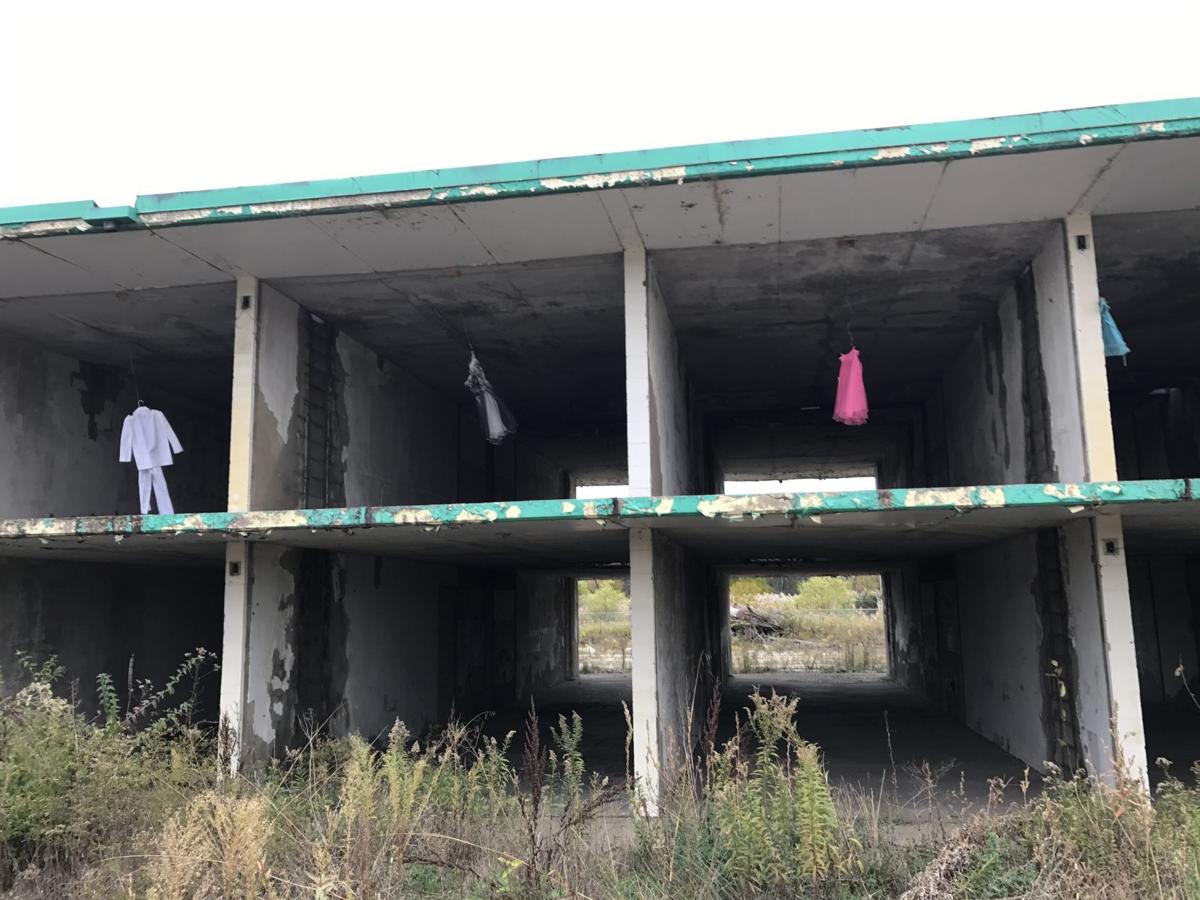 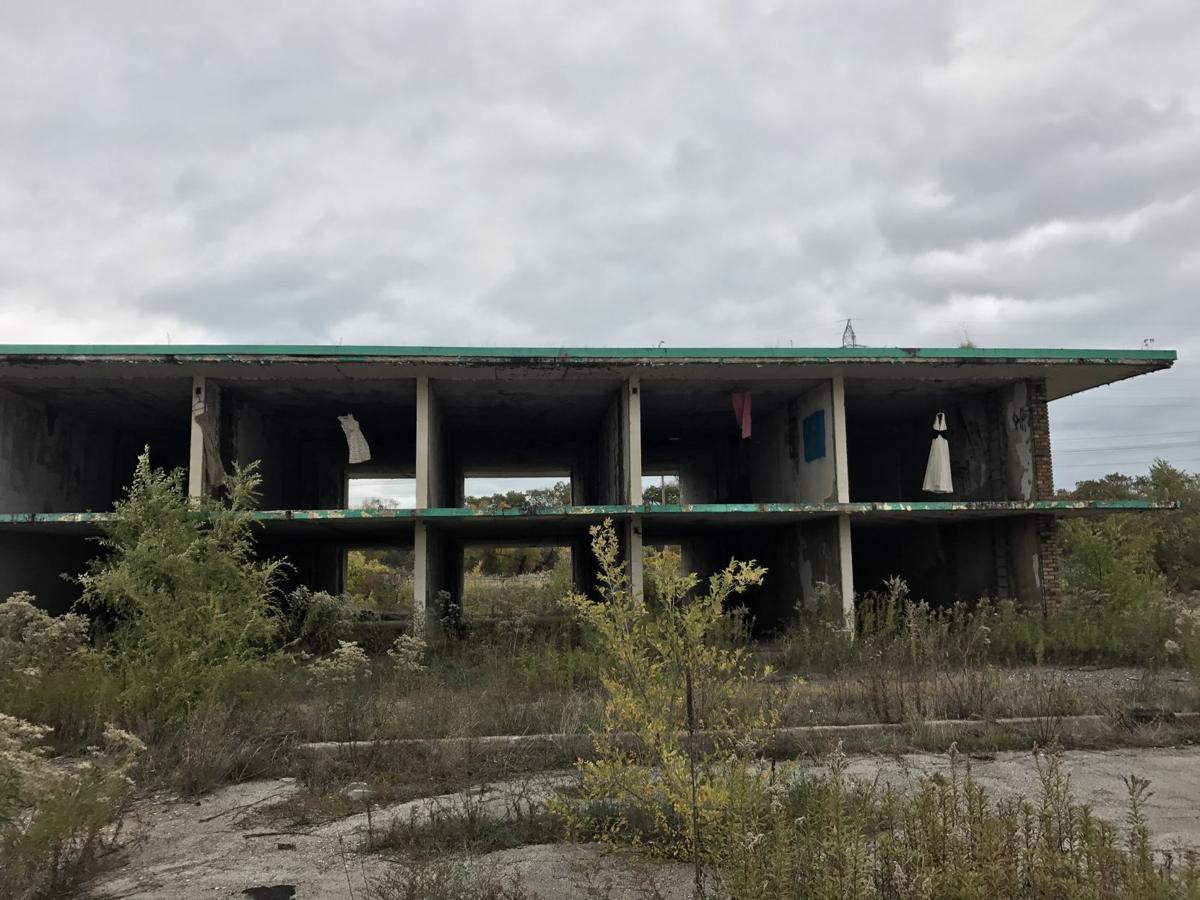 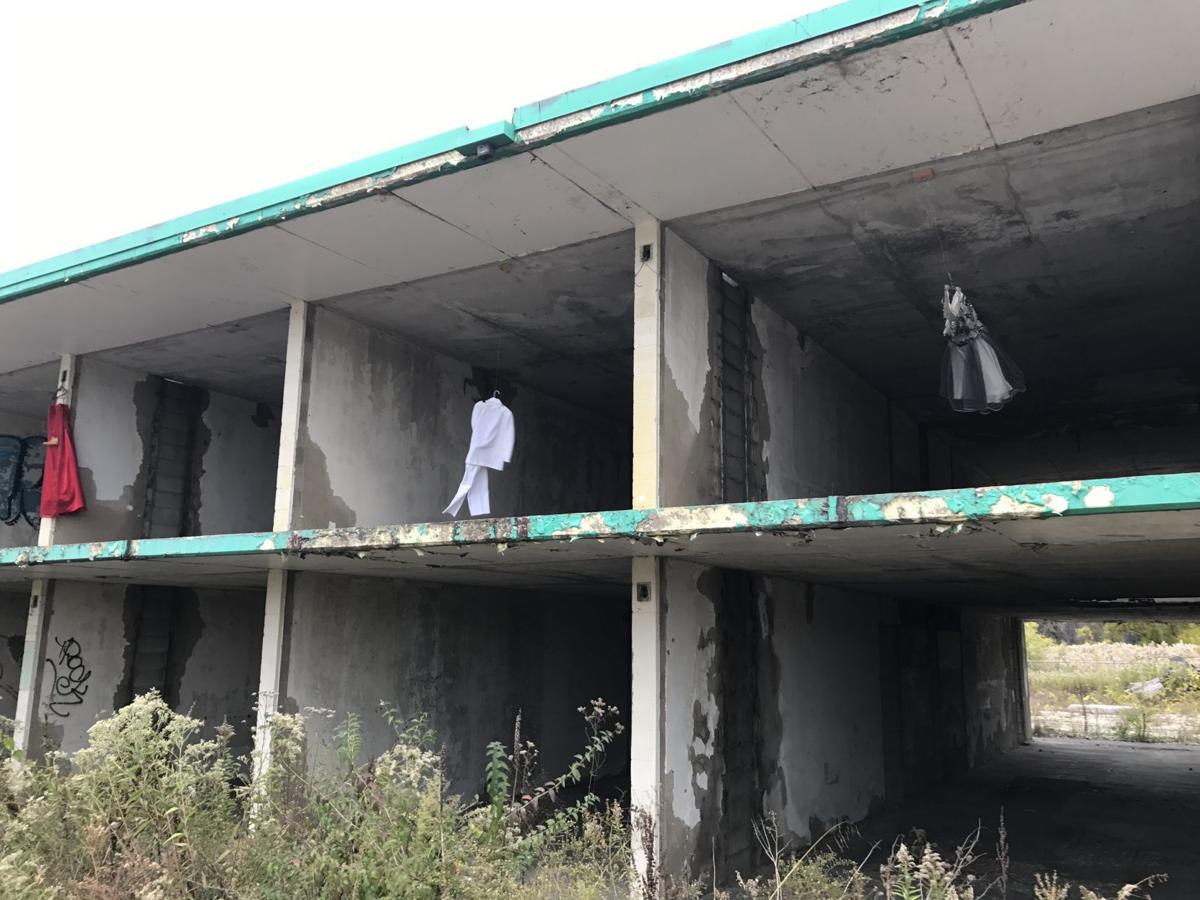 Dresses suddenly, mysteriously appeared one morning on the second floor of an abandoned motel on Dunes Highway in Gary.

Many passing motorists wondered how the dresses got up there and if it was a Halloween prank. Some online commentators said the dresses looked eerie hanging in the empty shells of rooms, and speculated if it was an effort to lure homeless women to their deaths or a statement about the sex trade that may have once taken place at a motel that was long ago forsaken, like thousands of other buildings in the once-prosperous Steel City.

Some found the array of clothing rippling in the wind strangely beautiful, a colorful adornment to a neglected, blighted structure.

The mystery has been solved.

It's an art project.

Miller-based artists Deborah Weiss and Jennifer Taylor hung the dresses at the long-vacant Holiday Inn on U.S. 12/20, which was most recently called the Interstate Motor Inn. The motel at 3690 E. Dunes Highway between downtown Gary and the city's lakefront Miller neighborhood was closed for good at some point in the 1990s and has since become a ghastly husk of its former self, with every room stripped down to an empty, shoebox-like concrete frame.

"The rooms were calling out for attention," said Taylor, who owns the Painted Board Studio on Lake Street and is also a television actress. "They're little boxes that need something. I've been looking at that building for years. We talked about pulling a prank and putting up Halloween ghosts just for fun. But we were suddenly overwhelmed with sadness when we thought of what it used to be, how many people stayed and played there, and how many people worked there. All that was left was empty memories."

Taylor and Weiss, a painter, sculptor and art teacher at Wirt-Emerson Visual and Performing Arts High Ability Academy, discussed the idea and thought it might be more effective and dramatic to use clothing to depict ghosts than white sheets. They talked about potentially stuffing the clothes to make them look more like people or even hanging up dolls or mannequins, but settled on the idea of simply putting dresses or suits in every room.

"We wanted it to be evening wear, for it to be fancy," Taylor said.

They tested out different ways of hanging clothes from overhead with laundry in her house, so it wouldn't go flying off the hangers in the rugged semi-outdoor conditions. Then they went out early on a Sunday morning when they figured few people would be out and suspended thrift store formal dresses, many in children's sizes, from the ceilings in the vacant shells of all 28 rooms on the second floor of the old Interstate Motor Inn.

The property was once pitched as a potential site for a South Shore Line train station and later as a flea market, but no one has talked about redeveloping it in at least a few years, possibly because of the high cost of the property, Rogge said.

"Lost Indiana" author John McDonald wrote on his blog he believed the motel was likely built in the 1960s during a boom of Holiday Inn construction nationwide, and noted that it was so picturesque as to have its own postcard during that period. The motel once had a restaurant, bar and swimming pool, but has been partly demolished and picked clean by scrappers.

All that's left is an L-shaped two-story building with hollowed-out boxes where rooms used to be. Weeds on the windswept lot reach waist-high.

"We were both in the dumps and thought the motel looks as depressed as we feel," Weiss said. "It was such a waste of space. It could be apartments or homes or inexpensive housing for homeless people. We wanted to make it look better. ... It's just a silly little project."

The art project has its admirers.

"The white pantsuit looked like it was running in the breeze when I first saw it the other day," he said. "So good use of any ugly, pointless space."

Taylor said they hoped to call attention to Gary's vacant buildings, and get people to look at them in a new light.

"We can pass something so often we stop looking at it," she said. "It becomes part of the landscape. We want people to be aware of the building, to be curious and wonder why the dresses are there. Why do we let abandoned buildings just sit there? Why don't we take them down or return them to some use."

Weiss said they were inspired partly by orange metal “Man in the City” sculptures that have popped around on rooftops across Detroit.

"There's a lot of public art in Detroit. It's really making a comeback," she said. "I've traipsed around abandoned buildings in Gary and thought about decorating the rooms. We talked for months and months about what we could do with these rooms. We're dressing up the motel. It's just whimsical, silly and meaningless."

Weiss, who has exhibited paintings, drawings and bird sculptures at galleries like the Lake Street Gallery in Miller and Paul Henry's in Hammond, invented backstories for each piece of clothing while they fastened them to the ceilings in the vacant rooms.

"I was making up stories like this was a little girl and this is a whole family raising these two kids," she said.

They had to re-affix some dresses later that day after a huge rainstorm swept through, knocking many down. But the glue they've used has proven durable and held the dresses in place despite strong winds whipping through the tunnel-like husks of rooms.

Weiss said the project was mainly for whimsy and fun, but had a serious intent.

"We want to cause people to notice and look at this building, and think of what a sad waste it is," she said. "We need to notice the things we don't see anymore. Instead of ignoring it, we should do something."

Gary is throwing open the doors of architecturally significant downtown buildings, both occu…

Gary's City Methodist Church, a towering Gothic structure that was once home to the largest …

Gary's Union Station to be covered with murals Saturday

Do you have any ideas for how to save Gary's historic architecture?

Here are the top 5 trending stories this morning.

Dresses, pantsuits and other clothes materialized one day in the long-vacant Holiday Inn on Dunes Highway in Gary after two artists in nearby …

SEATTLE — Housing prices are soaring here thanks to the tech industry, but the boom comes with a consequence: A surge in homelessness marked b…

The owners of the Track Lounge, the 140-year-old railroad-themed live music and sports bar north of downtown Crown Point, bought the Jolly Rog…

Whiting to refurbish its Vietnam Memorial. Mayor looking for families of deceased soldiers.

WHITING — The city is asking for help as it seeks to locate the families of four local soldiers who lost their lives in the Vietnam War.

HAMMOND — The city has added a striking sculpture with a pinch of green space along the Kennedy Avenue corridor in the Hessville neighborhood.

ArtHouse: A Social Kitchen will mark its first anniversary Saturday with a reality television-style bake-off akin to the popular "Great Britis…

More than 14 percent of Hoosiers with debt are struggling to pay their bills and are 90 days or more behind on payment.

All across the Region, companies and municipalities are switching their fleets from diesel and gasoline to cleaner-burning fuels that reduce t…

South Shore Clean Cities and its counterparts in Chicago and Wisconsin are planning a major green technology conference in May.

Cartographers of the human mind will unveil their psychological mapmaking in an upcoming exhibit at Paul Henry’s Art Gallery in downtown Hammond.

Paul Henry's Art Gallery in downtown Hammond is exhibiting "The Crowd," a collection of portraits and caricatures by veteran commercial artist…