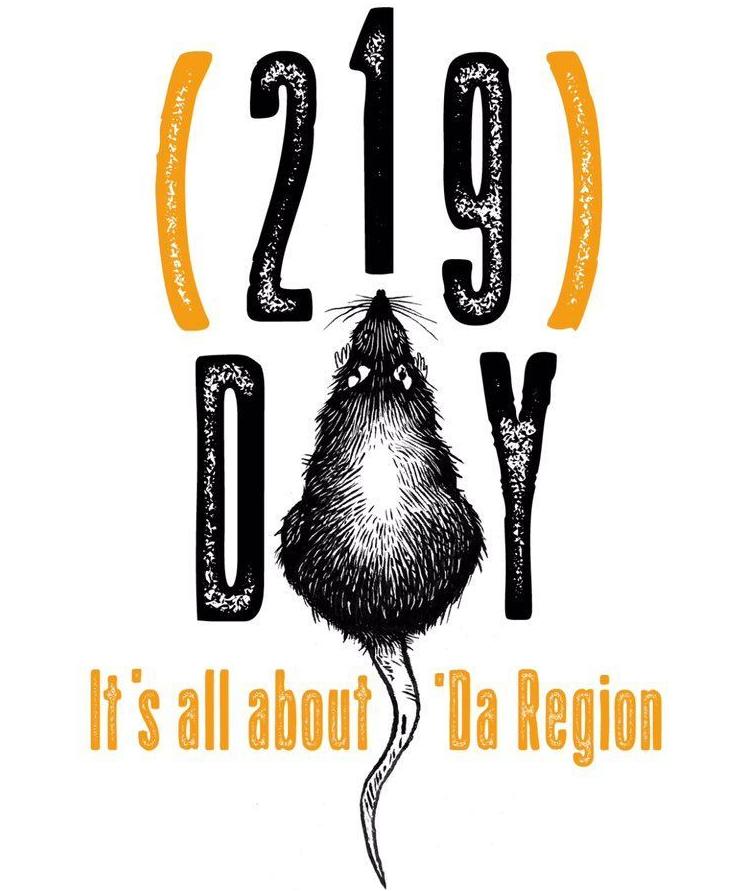 Hammond will celebrate 219 Day Feb. 19 in honor of the Region. 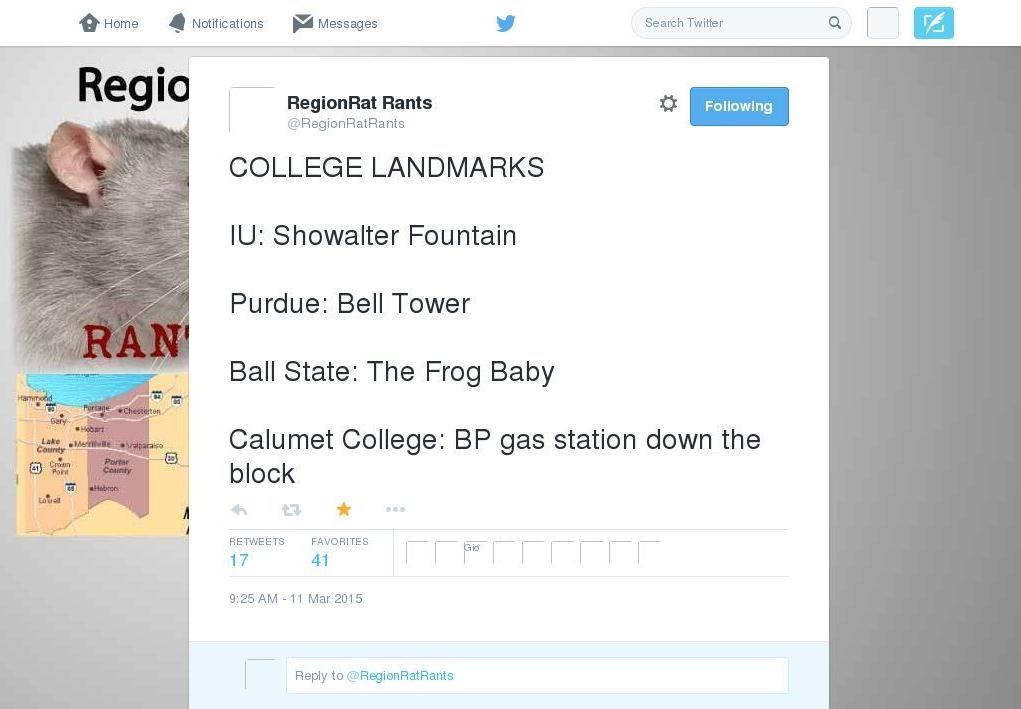 The popular Twitter humorist Region Rat Rants pokes fun at Northwest Indiana, and came up with the "219 Day" holiday, which the city of Hammond will stage on Feb. 19 this year. 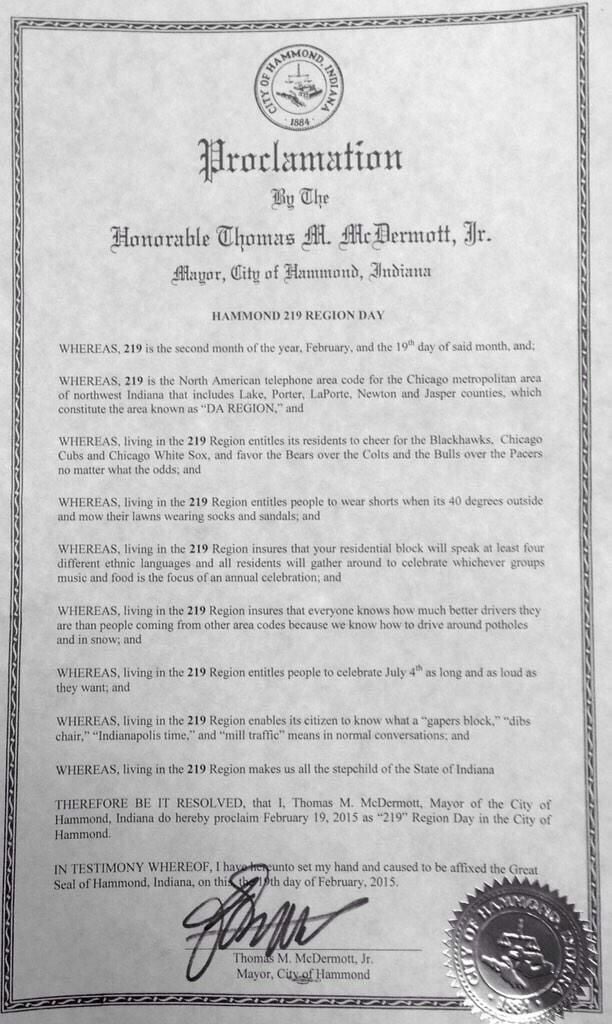 HAMMOND – Region Rats everywhere, listen up: The Region now has its own official holiday.

This year, Hammond is going to throw a big party celebrating 219 Day at the Hammond Civic Center.

Expect bands, craft breweries, a bean bag tournament and more festivities that will be announced later.

Last year, NWI  users of the social media site Twitter celebrated 219 Day with jokes, such as that they "missed the stank air and adult superstore billboards," that their "love for the Region burned with the fire of 1,000 oil refineries," and that they wished "your day would be filled with cold weather, trains and potholes."

Region Rat Rants, who tweets from the handle @RegionRatRants, encouraged the merriment and added jokes such as that "in honor of 219 Day the South Shore is running 219 minutes late today instead of the normal 218 minutes" and that "Isaiah 2:19" says "and then the Lord created Northwest Indiana...as a cruel joke."

The fledgling holiday celebrating Region life quickly got a stamp of approval from McDermott, who's mayor of Northwest Indiana's largest city.

His humorous proclamation says, "living in the 219 Region entitles people to wear shorts when it is 40 degrees outside and mow their lawns wearing socks and sandals... ensures everyone knows how much better drivers they are than people coming from other area codes because we know how to drive around potholes and in snow... entitles people to celebrate July 4th as long and as loud as they want... and makes us all stepchilds of the state of Indiana."

The 219 Day proclamation was the most viewed document in Hammond history, McDermott said. That and a "Twitter crush" on Region Rat Rants led McDermott to create a new holiday celebrating Northwest Indiana and all its quirky peculiarities, such as phrases like "gapers block, dibs chair, Indianapolis time and mill traffic."

"We're going to take up this cause of all things Region," McDermott said. "2/19 fell on Friday this year, which is perfect."

McDermott, who was described on Twitter on Tuesday as "no doubt the coolest mayor in America" for staging the event, plans to close all city offices at 2:19 p.m. so employees can go the the Civic Center to celebrate. He joked on Twitter the early Friday dismissal was "true Region style."

The celebration is expected to go until 10 p.m. or 11 p.m. Hammond is in talks with different bands and microbreweries about participating, and everyone in Northwest Indiana is welcome.

"It's a celebration for the whole Region," McDermott said. "And even the Civic Center is a very Region icon."

Hammond, which unveiled a 219 Day logo Thursday, plans to heavily promote the event. Anyone who's interested in participating, such as by serving craft beer, should contact Hammond's special events coordinator at (219) 853-6378.

219 Day will have fireworks, craft beer and Region food

The inaugural 219 Day, a first-of-its-kind holiday celebrating all things Northwest Indiana, promises to be Region as heck.

HAMMOND — People from all across Indiana have been buying 219 Day T-shirts, a celebration of all things Region coming Friday at the Hammond Ci…

219 Day, the celebration of all things Region held last week, was a big success that drew thousands of people to the Hammond Civic Center, lik…

'Regionrat' book has been made into a movie

A novel about Northwest Indiana has been made into a film.

219 Day to return, shaping up as a Region tradition

219 Day – the annual all-things-Region shindig celebrated on or around Feb. 19 – is cementing its place as an actual Northwest Indiana holiday…

They worship rats at a temple to the sage Karni Mata in India.

Hammond will celebrate 219 Day Feb. 19 in honor of the Region.

The popular Twitter humorist Region Rat Rants pokes fun at Northwest Indiana, and came up with the "219 Day" holiday, which the city of Hammond will stage on Feb. 19 this year.