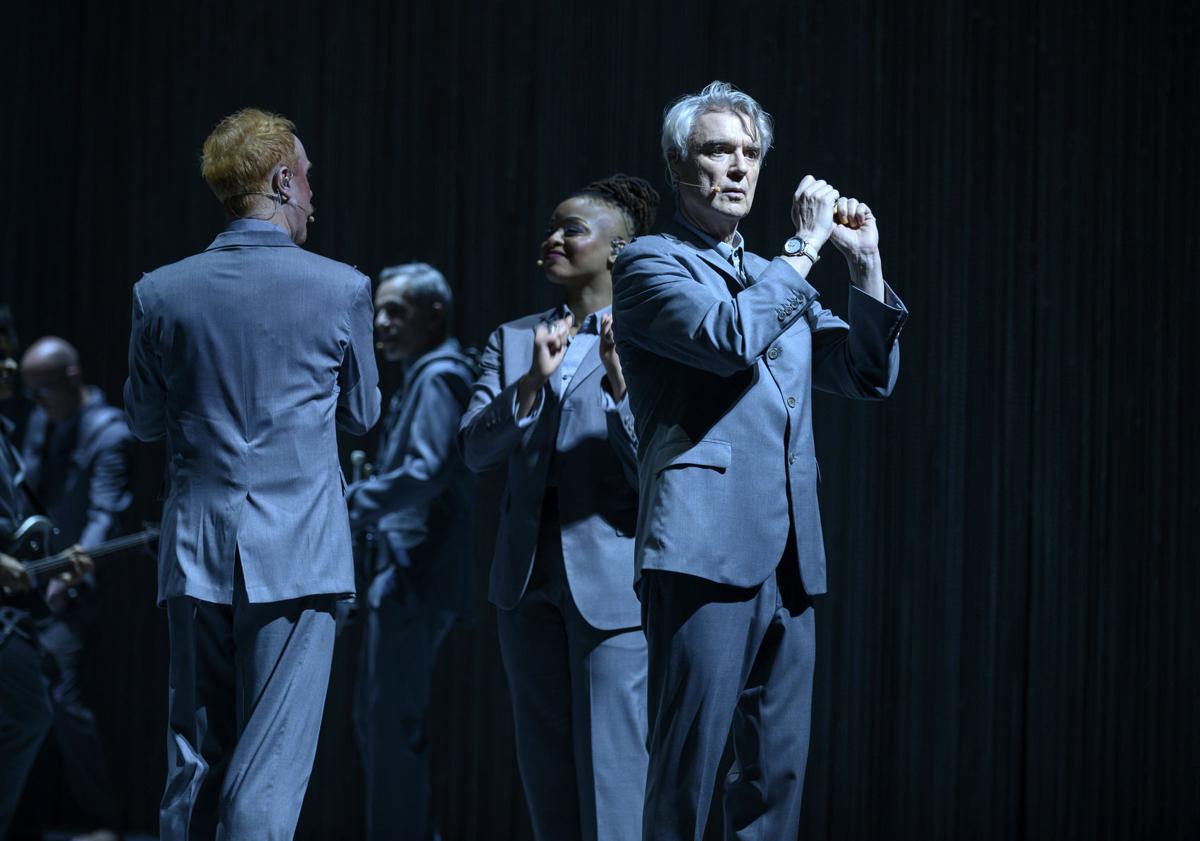 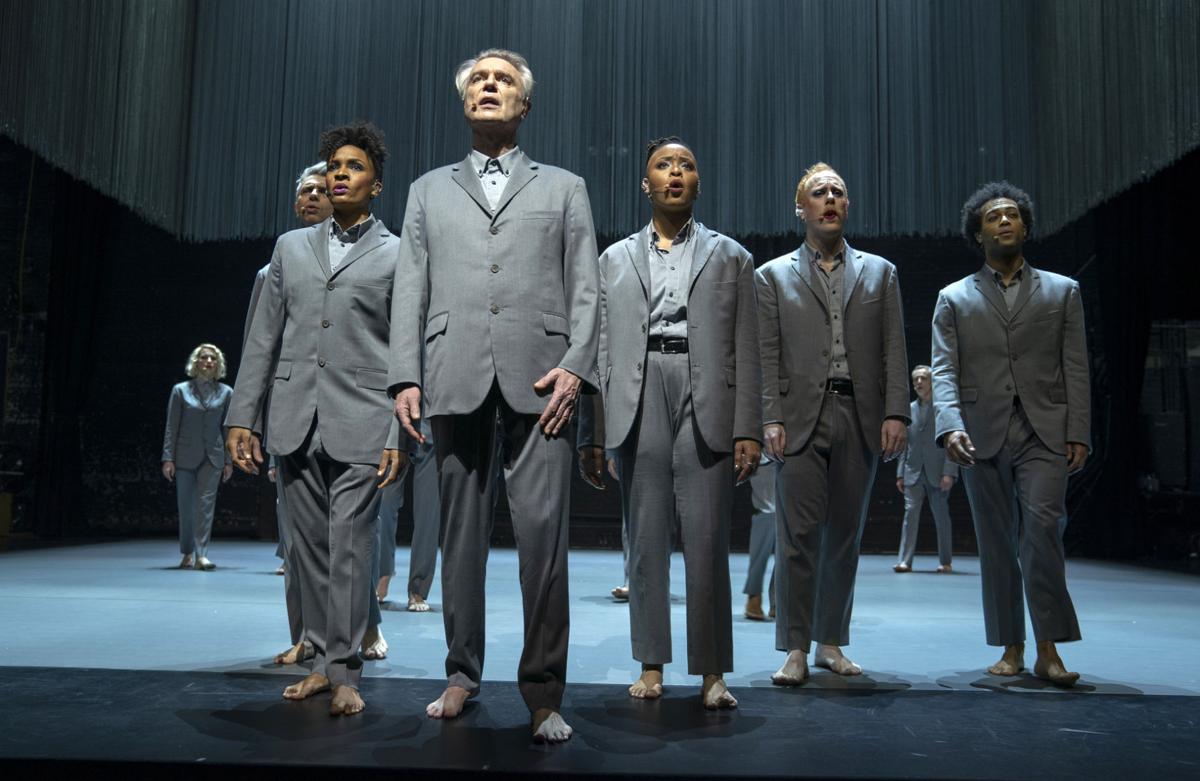 Ever since the pandemic darkened theaters earlier this year, sending the entire performing arts world into a catastrophic state of limbo, we’ve seen all manner of creative virtual substitutes: Digital dance seasons, clever musical mashups, a live-captured version of “Hamilton.”

Many of these have been good, some great. Yet none have truly matched the visceral experience many of us crave so profoundly: live performance, in a theater. And honestly, how could anything come close?

Well, now we have Spike Lee’s mesmerizing film version of David Byrne’s terrific Broadway concert “American Utopia,” which feels so thrillingly alive, you may actually forget you’re not in a theater. Or perhaps you'll feel like the stage has somehow been lifted from its moorings and delivered straight to your living room — or, as Byrne might prefer, right into your brain. In any case, this hypnotic film experience is a badly needed shot in the arm for all of us — music lovers, theater lovers, dance lovers, culture lovers, life lovers. It’s also one of the best concert films in recent memory.

Of course, “David Byrne’s American Utopia,” a major Broadway happening that was due to return to the Hudson Theatre this fall, feels like far more than a concert. It's based on Byrne’s music, yes, from his 2018 album of the same name but also other solo work and some iconic Talking Heads tracks. But that’s just the launching point.

The show, which one could broadly describe as a reflection on community and connectedness, is filled with pungent Byrne-ian commentary, on everything from brain function to Dadaism to climate change. “Meeting people is hard,” he muses at one point. But he can also get more political, as when he chides Americans for low voter turnout, especially in local elections.

A crucial element of the show’s success is its enormously talented multicultural supporting cast of 11 musicians and dancers, who hail from Brooklyn to Brazil. Dressed just like Byrne in silver-gray suits and bare feet, they play fascinating percussion instruments, and also sing and dance; everyone here does double or triple duty. Standouts include the exuberant Bobby Wooten III on bass and the elegant Angie Swan on guitar.

Then there's the endlessly inventive choreography by Annie-B Parson, not so much dancing as a holistic system of movement performed joyfully by lead dancers Chris Giarmo and Tendayi Kuumba. “I dance like this because it feels so damn good,” goes the Byrne song “I Dance Like This,” and yes, it does feel damn good, both to watch and to emulate. By the way, go ahead and try to get through this film without dancing yourself.

Lee's cameras constantly find new and exciting angles on the action (the cinematography is by Ellen Kuras) — overhead, underneath, behind the performers or half an inch from their faces. And yet we never glimpse a camera, even though 11 operators were involved.

The set is spare and stylish, surrounded by shimmering metallic curtains in the same silver-gray as the suits. “I thought, what if we could eliminate everything from the stage, except the stuff we cared about the most?” Byrne explains. “What would be left? ... Us, and you.”

Lee has made a few additions to the Broadway show. For example, when Byrne and the cast sing Janelle Monae’s stirring protest song “Hell You Talmbout,” chanting names of Black men and women who died in racial violence or at the hands of police, Lee provides powerful visuals and adds more recent names like Breonna Taylor and George Floyd.

As for Byrne, at 68 a remarkable font of quirky energy, he shifts seamlessly from somber moments like this to ebullient renditions of Talking Heads classics like “I Zimbra,” “Once in a Lifetime,” and “Road to Nowhere.” But nothing gets the audience out of their seats like the rollicking version here of “Burning Down the House.” Chances are you won't stay in yours.

On the show's closing day in February — I happened to be there with my sister and cousin — there was happy news during curtain calls. Byrne announced to cheers that the show would return in September.

Then the pandemic happened. The show has just announced a return for September 2021 — a year later than planned. Until that one fine day, let’s thank Lee and Byrne for giving us something a little better — no, a lot better — than merely the next best thing.

Not The Chili Peppers but pretty close

Local Scene is a weekly feature spotlighting musical happenings in the Region.

Outlaw country singer-songwriter Billy Joe Shaver, who wrote songs like "Honky Tonk Heroes" and "I Been to Georgia on a Fast Train," has died at 81.

Nawty singer steps out solo with new EP and party

Mandalyn, from the band Nawty, is now branching off into a solo music career to showcase her original songs. Her new EP will debut this weekend.