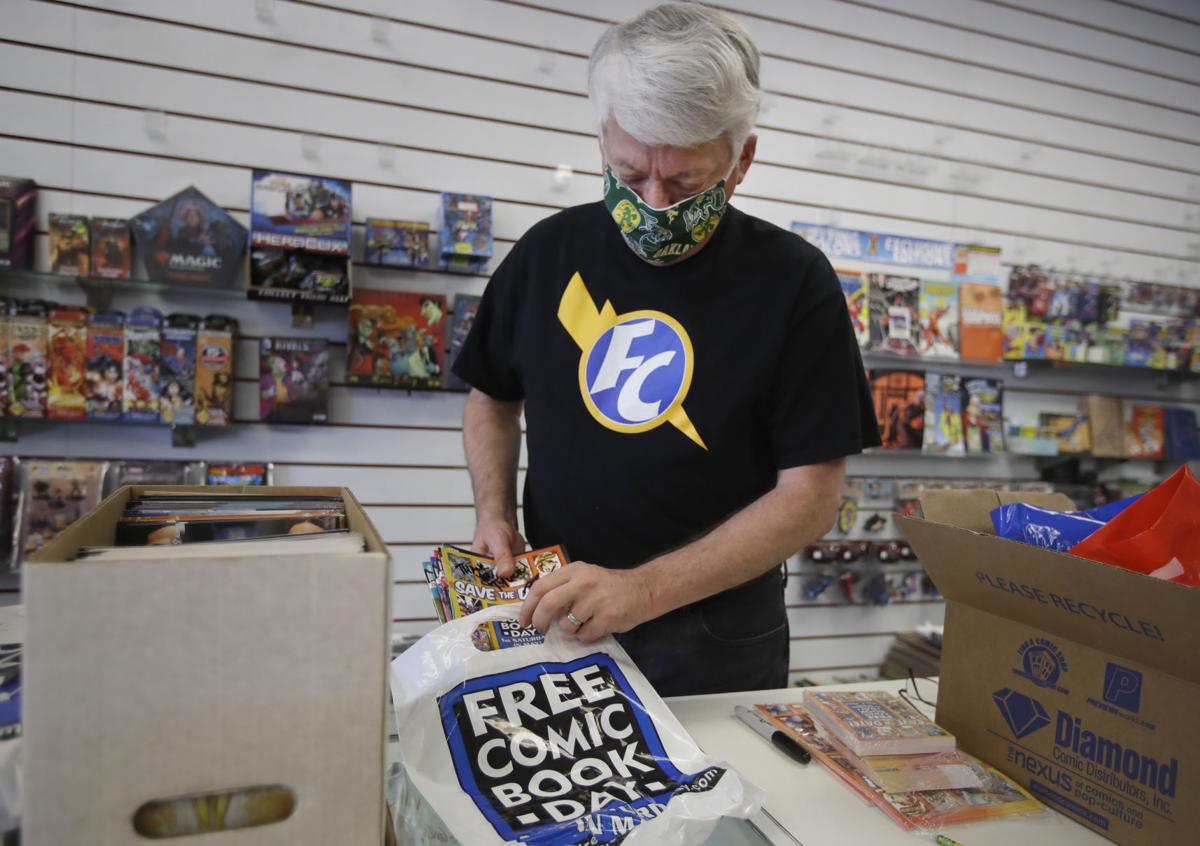 Joe Feld, owner of Flying Color Comics, loads comics into plastic bags for curbside delivery outside his shop in Concord, Calif. on Wednesday. The biggest day of the year for comics retailers in America is May 2, Free Comic Book Day, which Feld created. There will be no such day this May, and no comics to populate it after the main distributor stopped shipping product. 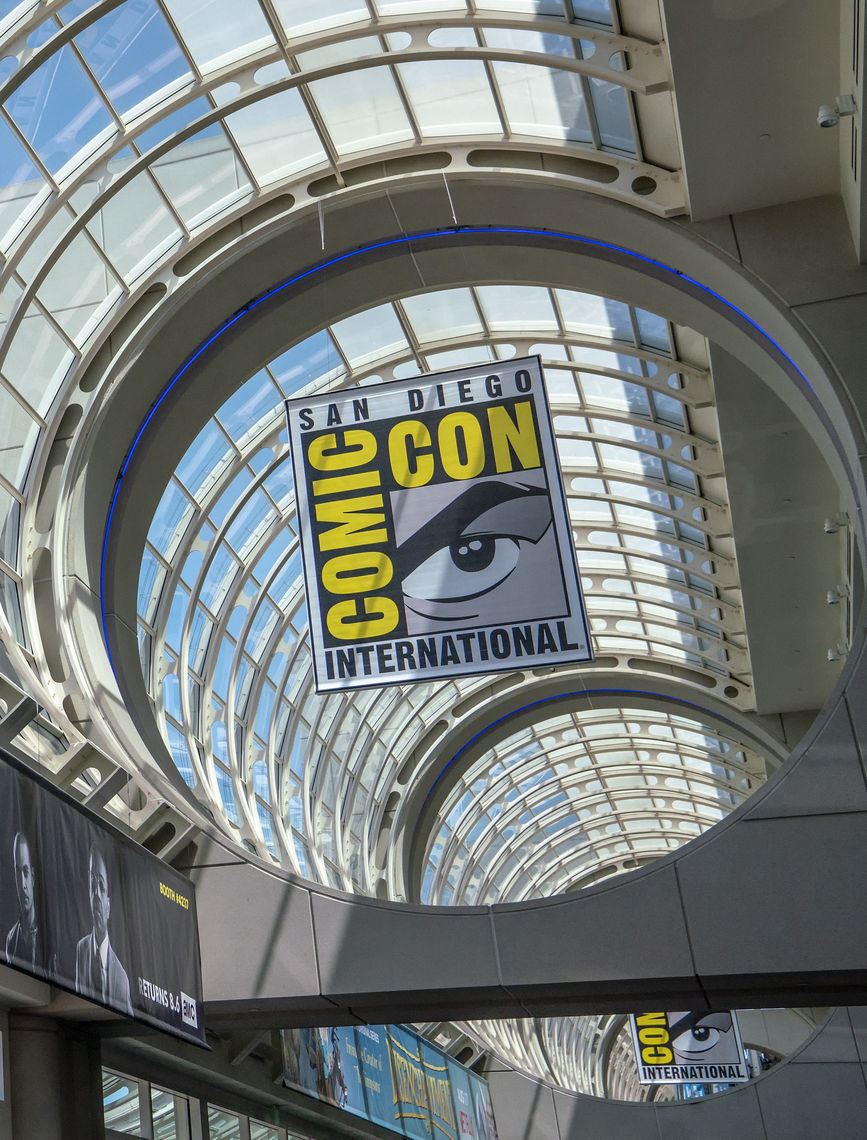 Signage for Comic-Con International in San Diego on July 20, 2018. This year’s San Diego Comic-Con has been canceled due to coronavirus-related restrictions around large gatherings. Organizers say they are planning for the festival to return in July 2021. 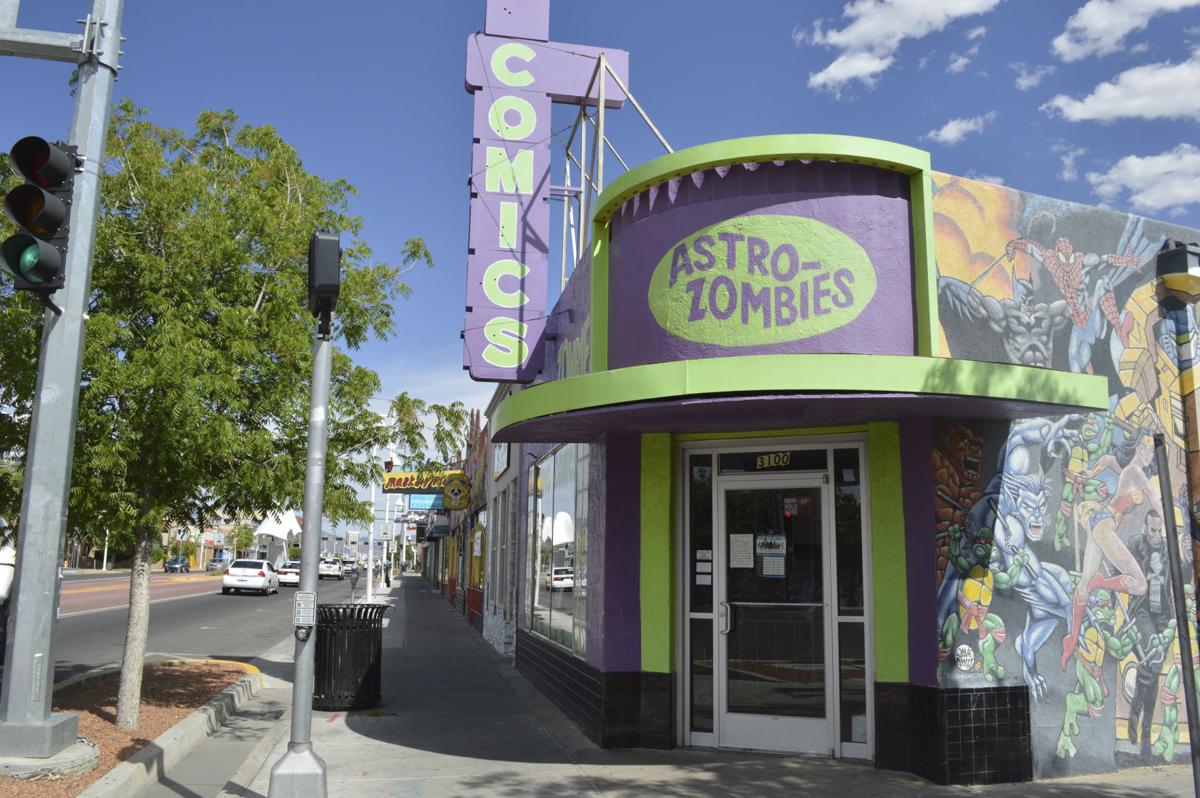 The Astro-Zombies comic shop in Albuquerque, N.M., sits closed due to a statewide health order to stop the spread of COVID-19 on Monday.

The pandemic has transformed Christina Blanch, owner of Aw Yeah Comics, into a nightly TV host.

Nine times a week, Blanch leads a livestream from the store she lives above in Muncie, Indiana, to sell some comics and interact with regulars. She holds up issues one by one, usually for $5 or $10, and takes down addresses from buyers. It’s a way to get by but helps keep the shop's community spirit alive. The show has a warm, thank-God-we-have-each-other feel to it. Sometimes Blanch sips a Modelo or vents about a difficult day. She calls it “What We Do in the Comic Shop.”

Chicago police to issue citation for another large party

Long a repository for tales of world-threatening cataclysms and doomsday dystopias, the comic shop in the coronavirus era now finds itself drawn into a fight for its very survival. The crisis, felt across retailers, poses a particular threat to comic book shops, a pop-culture institution that has, through pluck and passion, held out through digital upheaval while remaining stubbornly resistant to corporate ownership.

Even as the pandemic era takes on the appearance of a comic — desolate urban centers, masks everywhere — the ink-and-paper industry is at a standstill that some believe jeopardizes its future, casting doubt on how many shops will make it through and what might befall the gathering places of proud nerds, geeks and readers everywhere.

Saturday would have been Free Comic Book Day, an annual nationwide event intended to bring die-hards and newbies alike into stores. Instead, stores are closed nationwide and new print issues haven’t been released since late March, when the industry’s primary distributor, Diamond Comic Distributors, shut down.

This time, Pence wears mask as he tours Indiana plant

Normally, some 6 million extra comics are distributed for the day and around 1.2 million people flock to stores. For some shops, it dwarfs even Comic-Con, the annual San Diego convention (also canceled ). Joe Field, owner of Flying Color Comics in Concord, California, who came up with the holiday, calls it “the single biggest retail day in the comic book industry.”

The stoppage, says Dan Gearino, author of “Comic Shop: The Retail Mavericks Who Gave us a New Geek Culture,” comes as the industry — despite being a pipeline to massive billion-dollar blockbusters — isn’t in great financial health.

“We’re going to come out of this with fewer comic shops, but there will be enough that survive that this industry will continue,” Gearino says. “The question I’m asking is: How big will the culling be?”

Tate Ottati has run Tate’s Comics in Lauderhill, Florida, for 27 years — long enough, he says, to see people who first came in as teenagers return with their own kids. “There’s cool stuff every day where you go, ‘Oh, my God, look at this great comic book,’ or, ‘Look at this amazing statue,’” he says.

But while his faith in the store remains strong, he’s had to constantly improvise. “I was just going to reinvent the store, and then the coronavirus hit,” Ottati says.

At Flying Colors Comics, Field has been offering biweekly curbside pick-ups. He’s used to crowds every Wednesday when new comics come out — a shared experience for fans prowling racks to see the latest issues. But even once shops reopen, the bustle of signings and other events will be curtailed by distancing protocols in the typically cramped aisles of comic stores.

Field, though, is certain the comic shop will abide.

“Comic book retailers are the cockroaches of pop culture,” Field says. “We have been through all kinds of things that were meant to put us out of business, whether it’s the new digital world or distribution upheaval or Disney buying Marvel. We have adapted and pivoted and remade our businesses in ways that are unique and survivable.”

Steve Geppi, the founder of Diamond, said shutting down distribution was the hardest decision he’s ever made.

“When I was a 9-year-old boy reading comics, I never dreamed I’d be the guy to pull the plug on the whole industry,” says Geppi.

Diamond is now cautiously preparing to bring the company back online, hoping to fill orders for the third week of May. But restarting will be gradual, and a two-month shutdown has already been enough to potentially reshape the industry.

This week, DC began a more robust release of digital comics. Until now, digital comics have been a fraction of the $1 billion industry, accounting for about a tenth of sales. While newspapers have gone digital, most comic readers want to hold the colossal worlds of comic books in their hands.

DC also broke its exclusive distribution deal with Diamond to get new issues to shops that are open, adding a pair of new distributors. That move has been debated among shop owners; some say they'd rather wait until Diamond restarts. DC didn't comment.

“We want everybody to survive,” Geppi says. “The consumer is going to be the one to decide the fate of the industry.”

Writers and artists have rallied to support shops. Kami Garcia, Brian Michael Bendis, Gwenda Bond, Sam Humphries and Phil Jimenez organized a five-day Twitter campaign, #Creators4Comics. They launched with 150 creators auctioning art, comics and experiences. By the time it was over, they had more than 600, including Frank Miller and Neil Gaiman. It raised more than $433,000.

“I could tell you my life story through the lens of comic book stores I’ve loved,” Humphries adds. “I don’t think any of us could cope with a world where comic book stores only lived on in our hearts. We need them to live on in the real world, too.”

Illinois has spent tens of millions of dollars building makeshift field hospitals to prepare for an anticipated flood of coronavirus cases, but so far has not had to use the thousands of extra beds. That was exactly the plan.

The total number of Hoosiers who died after being diagnosed with COVID-19 climbed to more than 1,000, including two newly reported deaths Thursday in Lake County.

An Illinois legislator filed a second legal challenge to Gov. Pritzker’s efforts to discourage the spread of the coronavirus, saying he's seeking a compromise on the statewide stay-at-home order.

Volunteers and organization members have delivered meals to more than 1,000 seniors twice a week.

Law enforcement to ride for free on South Shore trains

South Shore Line is adding police officers and more to a list of those who can ride the train for free.

Those tested positive for COVID-19 may be asked to call the Indiana State Department of Health as a part of a new, centralized contact tracing effort.

Joe Feld, owner of Flying Color Comics, loads comics into plastic bags for curbside delivery outside his shop in Concord, Calif. on Wednesday. The biggest day of the year for comics retailers in America is May 2, Free Comic Book Day, which Feld created. There will be no such day this May, and no comics to populate it after the main distributor stopped shipping product.

Signage for Comic-Con International in San Diego on July 20, 2018. This year’s San Diego Comic-Con has been canceled due to coronavirus-related restrictions around large gatherings. Organizers say they are planning for the festival to return in July 2021.

The Astro-Zombies comic shop in Albuquerque, N.M., sits closed due to a statewide health order to stop the spread of COVID-19 on Monday.