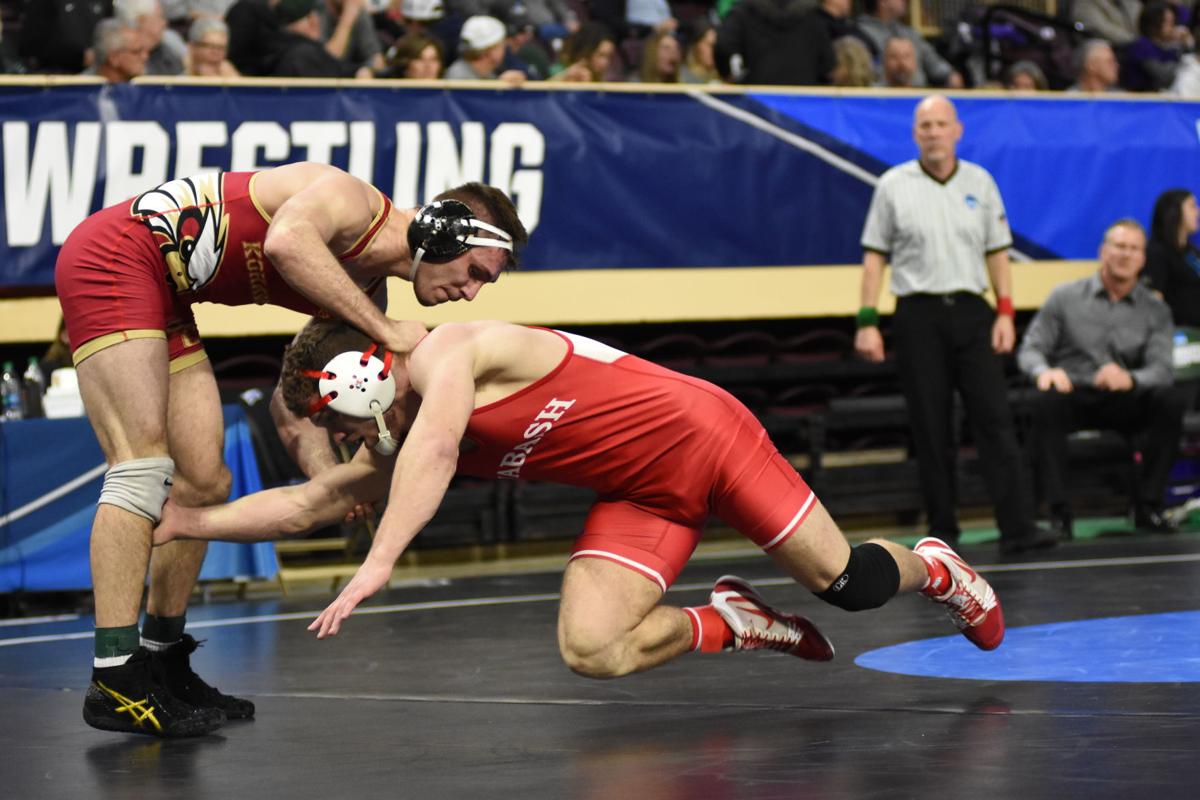 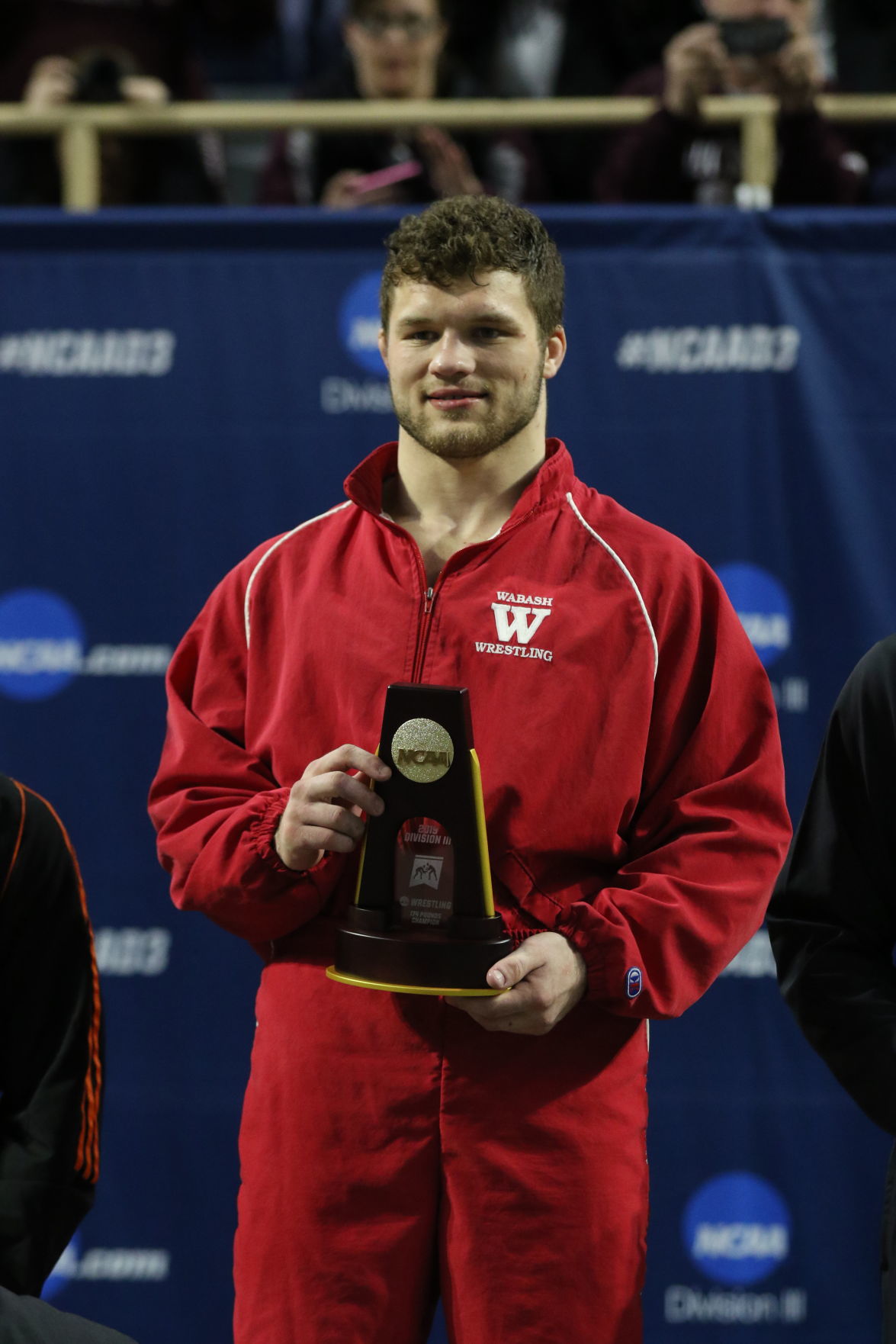 Due to a neck injury, Darden Schurg didn't wrestle for two months during the season. 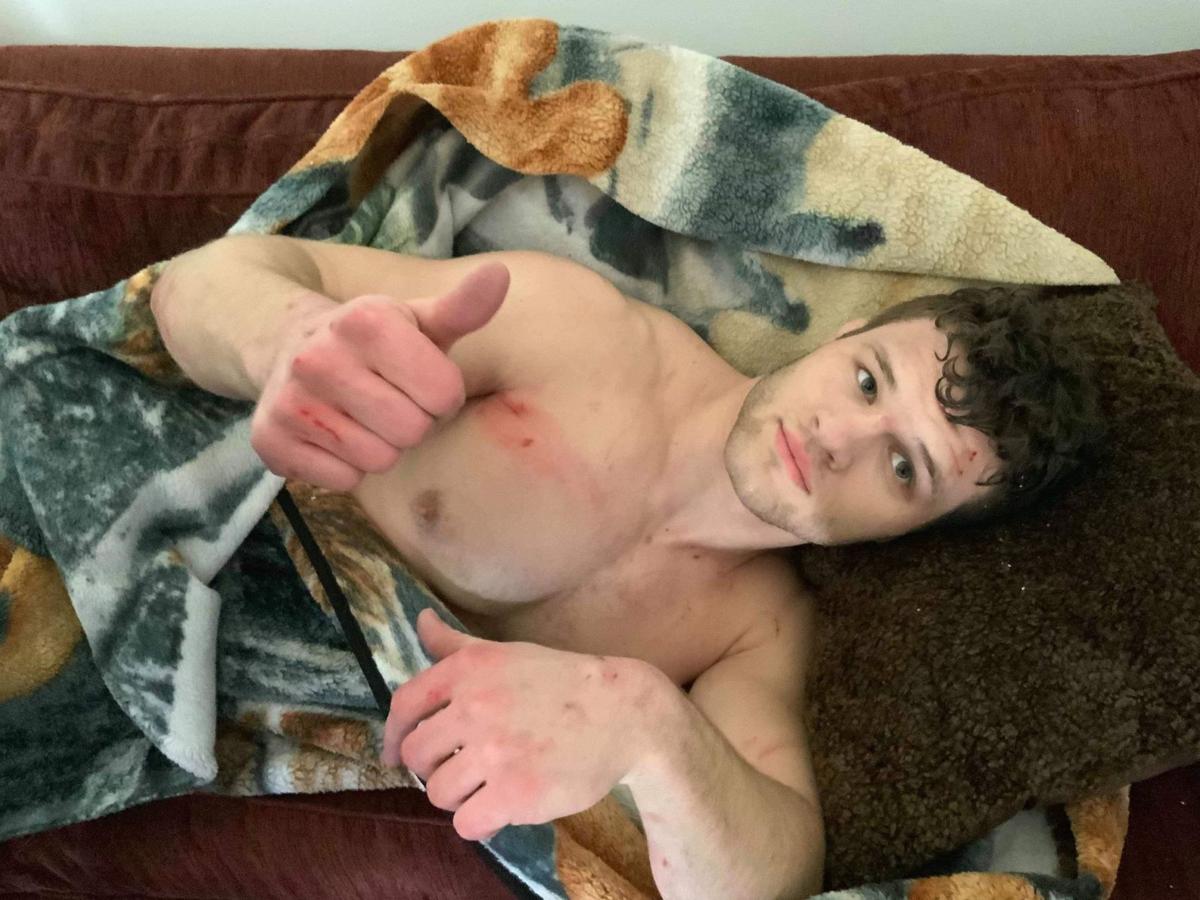 Due to the sharpness of the broken ice, 21-year-old Darden Schurg of Crown Point  walked away with scratches and scrapes on his hands, head and chest.

Darden Schurg admits there were a few brief moments when he considered retiring from the wrestling mat.

After a neck injury earlier this season — a herniated C7 vertebrae — the Wabash College 174-pound wrestler and Crown Point graduate said he was told by his doctor the worst-case scenario included possible paralysis if he continued to wrestle without allowing it to properly heal.

But heroism and determination are common themes characterizing Schurg's life.

“He told me I’m a grown man, and I can make my own decision,” Schurg said.

Schurg and Wabash coaches and trainers put together a plan. Schurg, 21, would be shelved for two months while he rehabbed up to three times a day.

“We got very creative. He didn’t wrestle live from January until regionals (on Feb. 22),” coach Brian Anderson said. “I’ve never done that before. It’s hard to do that and keep that competitive edge.”

“Results don’t happen in a day. Wrestling comes to me like riding a bike, but you still have to work at it,” Schurg said. “There were days when I was down on myself but at the end of the tunnel, if you do the right thing, things work out in your favor.”

Schurg trailed Mount Union's Jairod James 3-1 with about 30 seconds to go in the final match. James was called for stalling and then an illegal hold to force overtime. Schurg scored a takedown nine seconds into sudden victory.

“We knew (James’s) conditioning hadn’t been tested so we wanted to push it,” Anderson said. “James was just trying to put the match on lockdown. We just had to be persistent.”

Schurg credits the support of his coaches but also that of his family and girlfriend, Lexy Knoerzer, with getting him through a difficult time, mentally.

“There were a few scares, a lot of pain and a national championship,” he said.

The hours in the Crown Point wrestling room also helped prepare him for college, he said. A total of five Schurg brothers went through the Bulldogs wrestling program. Daylan Schurg is a sophomore teammate at Wabash.

“We were a pretty successful program at Crown Point. I’d say we were a powerhouse,” Darden Schurg said. “I knew what it took to be successful and I saw an immediate impact with some of the athletes that were already (at Wabash) when I got here.”

Darden Schurg is a redshirt junior. He plans to return next season to defend his title. He’ll play a leadership role on a team that returns seven national qualifiers.

“Only a select few get to wrestle (for a national championship),” Anderson said. “I’m very glad Darden gets a chance to come back and attempt to do it again after he gets some rest.”

Schurg's battle back to victory on the mat follows another recent triumph for his own determination.

On Christmas Eve, Schurg was visiting his father in Hobart when a family breakfast turned into a rescue mission on Lake George.

A cat fell through the ice of the icy lake, and Schurg plunged in to rescue it.

His family took video of the rescue and posted it on Facebook, garnering tens of thousands of views.

"Honestly I feel like I would do it again. It was sort of a heat of the moment thing," Schurg said at the time. "Though I'd rather have long sleeves on so I don't get cut up as bad from the ice."

A cat came close to cashing in its nine lives Christmas Eve after falling into an icy lake, but a Wabash College wrestler dived in to rescue it.

When Sam and Cosmo were taken to a veterinarian's office by their owner of 10 years, the two dogs had no idea how close they came to never com…

GRIFFITH — A low moan echoed from the depths of an icy ditch, causing a Griffith man to scale down the side of Colfax Avenue to investigate.

Due to a neck injury, Darden Schurg didn't wrestle for two months during the season.

Due to the sharpness of the broken ice, 21-year-old Darden Schurg of Crown Point  walked away with scratches and scrapes on his hands, head and chest.