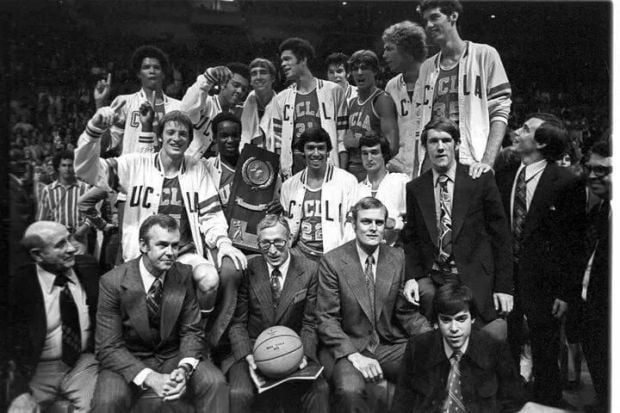 Members of the UCLA men's basketball team celebrate after winning the 1975 NCAA championship. It was the 10th title of Bruins coach John Wooden, front holding a basketball, who retired after the season. 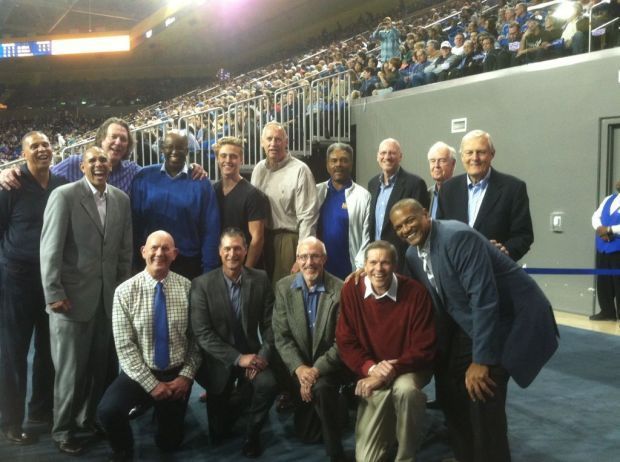 When did March Madness morph into March Badness?

As suggested in a recent Sports Illustrated article, the trend may have started 40 years ago with the final-chapter closing of one of sports' greatest dynasties.

"The fast break was our offense," Pete Trgovich said of the opportune open-court play of the UCLA Bruins. "It was fun to play and, for the fans, it was fun to watch."

UCLA's high-powered attack wasn't just for aesthetics. It was also somewhat effective. While keeping his foot off the brakes, legendary coach John Wooden led the Bruins to 10 NCAA championships, including seven in a row.

East Chicago native and Munster resident Trgovich was a member of two of those championship teams, including the 1975 team which went 28-3 after defeating Kentucky 92-85 for the title — Wooden's final game before retiring.

In Wooden's absence, a more micromanagement approach focusing on ball control took root in college basketball, and it hasn't gone away, even with the introduction of the shot clock.

"I guess you can't argue with the success some of these teams have had playing the clock down," Trgovich said, "but I'm not a big fan of 18-17 halftime scores that we're seeing a lot of these days."

During halftime of the Bruins' March 1 home game against Washington State at Pauley Pavilion, UCLA honored the 1975 team and its 40th anniversary.

"We had gotten together before for Coach Wooden's funeral (in 2010)," said Trgovich, a guard who averaged double figures as a senior and had 16 points in the win over Kentucky.

"This has been the first time we've gotten together since then."

Two players, Casey Corliss and Richard Washington, were unable to attend due to family obligations. The bodily remains of Gavin Smith, a sophomore forward on the team, were found last October after he was reported missing more than two years ago. A convicted drug dealer is charged with his murder.

The 1975 team is often cited as being Wooden's favorite due to its success in spite of not having a loaded roster. But Trgovich clarifies.

"We were actually one of four of his favorite teams," he said. "That's still a great honor.

"We not only ran well on the floor, but there was no problems off the court from any of us during the season. That just comes from good families, good parents and good coaches."

Even before he went to Southern California, Trgovich was already a member of the legendary team: the 1971 East Chicago Washington Senators, who went 29-0 with future NBA player Junior Bridgeman and future major league pitcher Tim Stoddard also on the team.

In 2011, the Senators were inducted in the Indiana Basketball Hall of Fame as a team.

After UCLA, Trgovich was drafted by the Detroit Pistons as well as the San Diego Sails of the ABA. Trgovich opted to sign with Sails, but the ABA soon folded. After sitting out a year, Trgovich tried out for the Pistons, who still owned his NBA draft rights, but was cut.

Eventually, Trgovich took up coaching and led E.C. Central to a Class 4A state championship in 2007 — the first state basketball championship for the city since the 1971 Senators.

"After he graduated, I decided to become a tennis dad and follow my daughter's final two years in college," Trgovich said of Alaina, who played at the University of Wisconsin.

"I would like to get back into coaching again with the right opportunity," Trgovich said.

Members of the UCLA men's basketball team celebrate after winning the 1975 NCAA championship. It was the 10th title of Bruins coach John Wooden, front holding a basketball, who retired after the season.