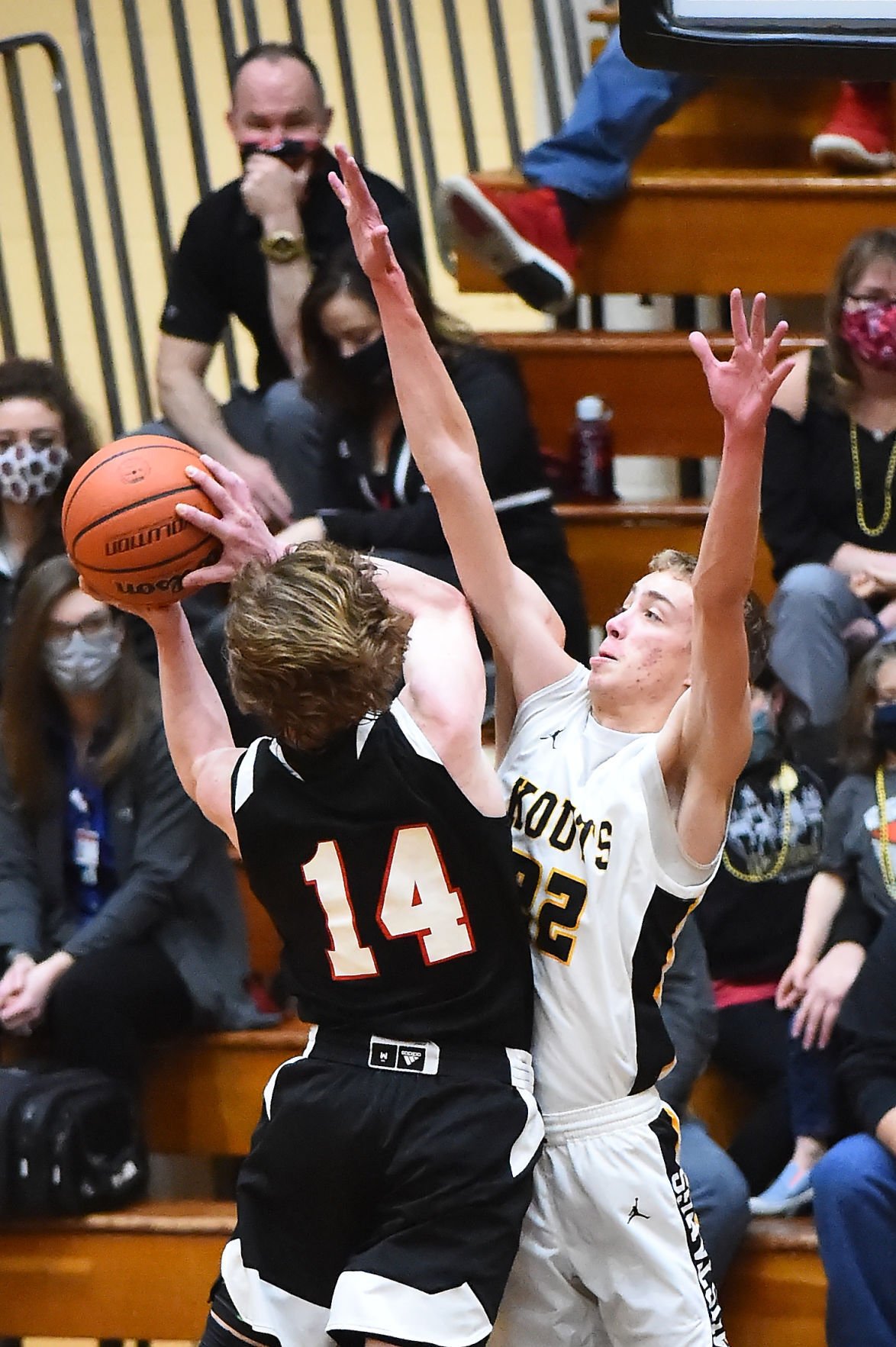 Kouts’ Parker Kneifel tries to stop Southwood’s Carson Rich as he goes to the basket in the first quarter during the Class A semistate on Saturday in Lafayette. 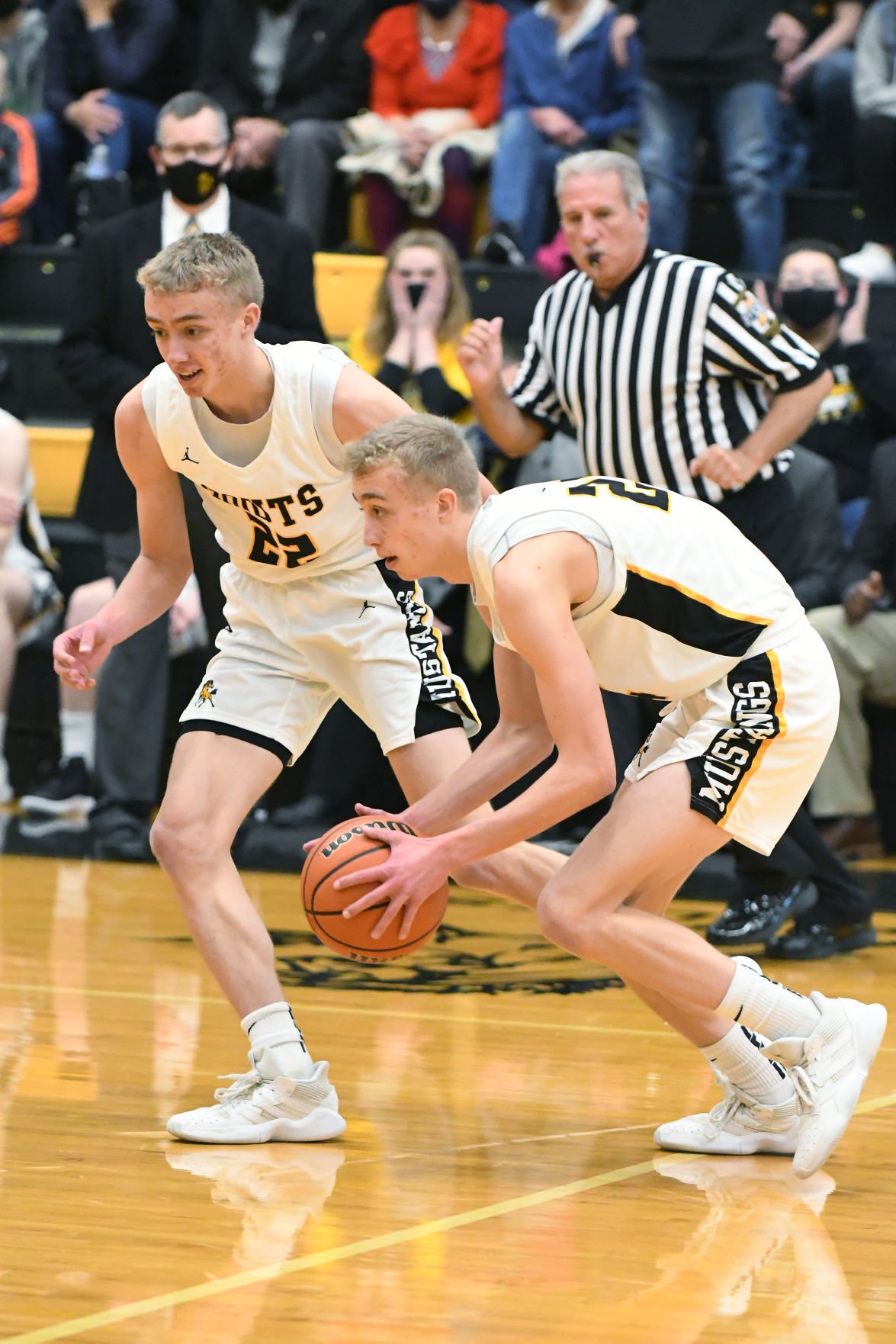 Kouts’ Hunter Kneifel picks up the loose ball with Parker Kneifel in the fourth quarter during a Class A sectional championship at Kouts. 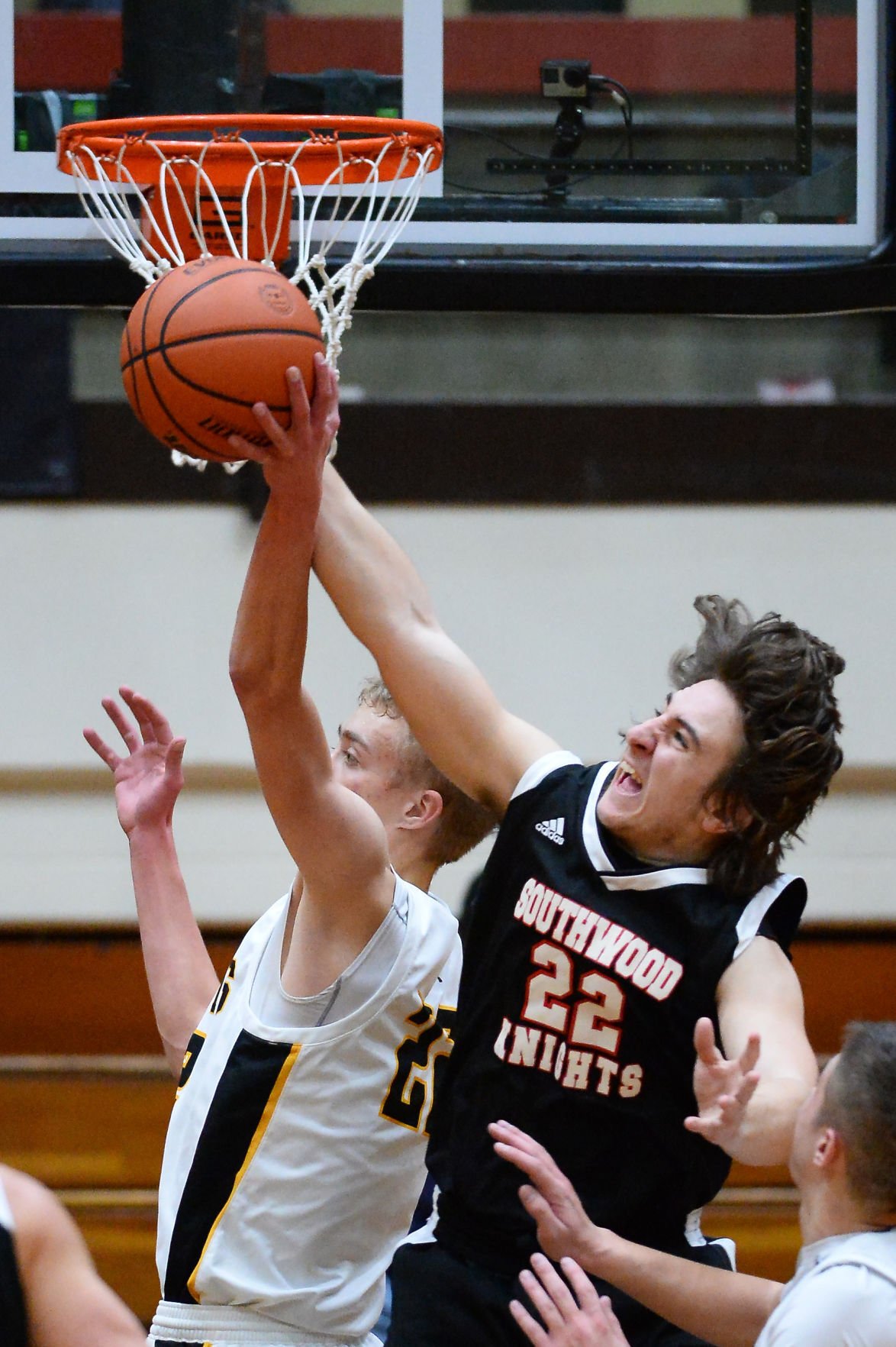 Southwood’s Logan Barley tries to get the rebound away from Kouts’ Parker Kneifel at the basket in the fourth quarter during the Class A semistate on Saturday in Lafayette.

LAFAYETTE — Two plays late in the second half Saturday of Kouts’ 86-70 Class A semistate victory over Southwood were identical in almost every way.

The player from the home team executed an all-ball blocked shot and was whistled for a foul by the same referee. As referees typically do when they tweet too soon and realize too late that it actually was a clean blocked shot, he reacted the same. He gave it the Elvis Presley thrust of the pelvis while pounding his hips with balled fists to signify, “Got him with the body.”

The player who blocked the shot gave an identical reaction both times: an incredulous smile with a slow shake of the cocked head. Same smile from the identical face, attached to the carbon-copy body. But not the same athlete. One foul was charged to Hunter Kneifel, one to Parker Kneifel, forwards who are the “other” set of identical twins in state-bound Kouts’ starting lineup.

Kouts doubles up with Kneifels

The Mustangs (29-2) play at such a fast pace that the last thing the opposition needs is to have to pause for an instant to try to figure exactly who’s who. Meanwhile, half the time Kouts’ players don’t need to see teammates to know exactly where to find them.

“It throws the other team off, because they can’t tell us apart by looking at our faces or at our bodies,” said Parker Kneifel, who wears No. 22. “Only our numbers give us away. And like we know where each other are all the time: ‘Oh, you’ll be there.’ We’ve been together our whole lives.”

“The four twins, we all started going to the gym together, and from the first day our goal was to get to state,” Hunter Kneifel said. “We talked about it then.”

The Kneifel twins agreed that their games are not identical.

Parker said of Hunter: “He handles the ball better than I do. He brings the ball up the floor better.”

The Kneifels have identical opinions about playing with the Wireman twins: They love it.

“They’re a lot of fun. They have so much skill it makes playing basketball a lot easier with them on the floor,” Hunter said. “They always encourage us. We have to be moving as fast as them. It just pushes you.”

Kouts coach Kevin Duzan lets them play with the pedal to the metal, even if that means stretches of losing control of the basketball.

Hunter Kneifel contributed 11 points, six rebounds and six assists and his twin added four points, four rebounds and an assist in the game that resulted in Kouts making it to state for the first time in school history.

The coolest thing about advancing to the Class A state title game in Bankers Life Fieldhouse, home of the Pacers, scheduled for April 3.

“Just seeing all the people here,” Hunter said. “They all follow us. It’s awesome.”

“I think it’s going to be playing in the big gym," Parker added. "This gym’s the biggest one I’ve ever played in and that one’s going to be much bigger. And we have all these fans coming out to watch us. It’s crazy.”

"When we talk about legacy and the heritage of basketball here, it's the same way I view farming. I just try to teach my kids that the legacy we leave is important."

Kouts’ Parker Kneifel tries to stop Southwood’s Carson Rich as he goes to the basket in the first quarter during the Class A semistate on Saturday in Lafayette.

Kouts’ Hunter Kneifel picks up the loose ball with Parker Kneifel in the fourth quarter during a Class A sectional championship at Kouts.

Southwood’s Logan Barley tries to get the rebound away from Kouts’ Parker Kneifel at the basket in the fourth quarter during the Class A semistate on Saturday in Lafayette.