In an unprecedented decision, the Illinois High School Association announced Wednesday that it has moved prep football to the spring due to the coronavirus pandemic.

Andrean and Calumet were prepared.

The 59ers and Warriors intended to face IC Catholic and Mount Carmel, respectively, in Week 2 (which would have been Illinois' Week 1) at home Aug. 28. But now that Illinois teams must wait until 2021 to get back on the gridiron, Andrean and Calumet will play each other instead.

Warriors coach Rick Good, who is a 2002 Mount Carmel alum, initially contacted 59ers coach Chris Skinner in June about the possibility of both Region programs squaring off. With increasing uncertainty looming over high school football in his home state, Good believes it was vital to have a backup plan.

"We consider ourselves a small school team, and Andrean is the high-water mark for small-school football in the area," Good said. "So we thought if weren't gonna be able to challenge ourselves with a high-level Illinois private school, then the next best thing would obviously be the Andrean squad that is in a lot ways a lot like Mount Carmel."

Both schools are expected to sign a contract Thursday for the Week 2 matchup, which will be a home game for the Warriors.

"We've missed out on a game the last two years with Curtis (Walton Jr.) passing last year and the year before Bishop Noll dropping out at the last minute," Kuntarich said. "We didn't want to be in that position again, so we really planned ahead this year."

Andrean coach Chris Skinner said he appreciates Calumet's proactive thinking. The 59ers haven't played the Warriors during his tenure, but finding a quick substitute for both programs' lone out-of-state game has made his preparation for the 2020 campaign a little easier amid the COVID-19 outbreak.

"I didn't even realize or really take the initiative to arrange any of that, but they reached out," Skinner said. "A good friend of mine (former EC Central coach Jay Novak) is coaching at Calumet, so they kind of took the first step."

Chesterton, Gavit, Hammond and Bishop Noll also had Illinois opponents on their schedules and will try to find replacement games. In Week 2, Chesterton was supposed to take on St. Rita, Gavit was slated to face TF South and Hammond intended to play Reavis. Bishop Noll had agreed to a matchup with Ridgewood in Week 3.

While the IHSA has changed course and rescheduled football, boys soccer and girls volleyball to compete from Feb. 15 to May 1, the Indiana High School Athletic Association tweeted Wednesday that "high school fall sports are on track to proceed as planned."

However, Indianapolis Public Schools announced July 18 that its school district has halted team activities until Aug. 17, which is four days before the 2020 football campaign is set to begin. According to the Indianapolis Star, IPS district athletic director Darren Thomas said "IPS football teams would either postpone or cancel the first two weeks of the season."

Crispus Attucks is also located in Marion County, which could be in for a much longer layoff. The Indianapolis Star reported Wednesday that "a plan put forth by Marion County health director Virginia Caine to push back football, soccer and volleyball, potentially to Oct. 1, was discussed." However, for now those contact sports will continue with a final decision to be made in the next "two or three weeks."

A suspension of that length would eliminate more than half of the regular season for Marion County football programs and could potentially jeopardize their ability to participate in the postseason. The 48th annual IHSAA state football tournament is scheduled to start Oct. 23.

Good said he feels for all of the football teams in Indiana and Illinois that have had their seasons altered by the coronavirus pandemic. Calumet resumed prep sports practices Monday after suspending workouts July 14 due to COVID-19, and Good hopes his program can continue to move forward.

"TF South High School is 15 minutes from us (at Calumet), and TF South itself is less than 10 minutes away from Munster High School," Good said. "It just goes to show how different (governmental) leadership makes a difference depending on where you are. I guess 'location, location, location' is not only true in real estate, but it's true for high school football, too."

Lake Central sports to go on as scheduled; extracurricular activities removed from school board agenda

“We’re excited to start practices ... and keep following the return to play protocols and doing our part to have a chance to play a season."

"This was the last ride you know? I cried, I really cried."

"I had no clue I was on their radar or anything."

"If this would have happened a few months earlier, I wouldn't have had the chance to become a state champ."

With no high school games, the Babe Ruth season offered relief from being quarantined. NWI Rippers' Frank Plesac said it felt like being free again.

“I hit more greens,” DeBoard said. “I was hitting super short. We fixed it and I just started hitting straight and really good.”

"It's strange to think that this was the first high school sports event in Northwest Indiana since March." 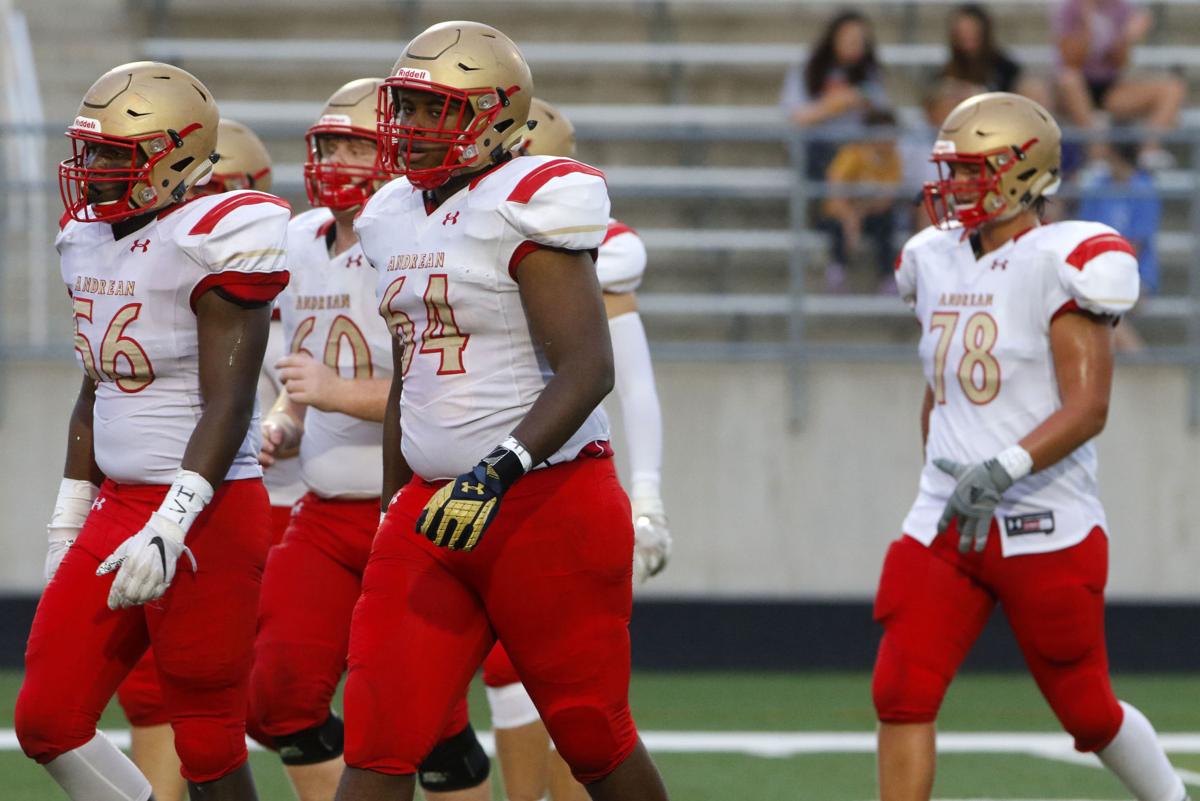 Andrean was supposed to play IC Catholic (Illinois) in Week 2, but since the Illinois High School Association has moved prep football to the spring, the 59ers will now take on Calumet. 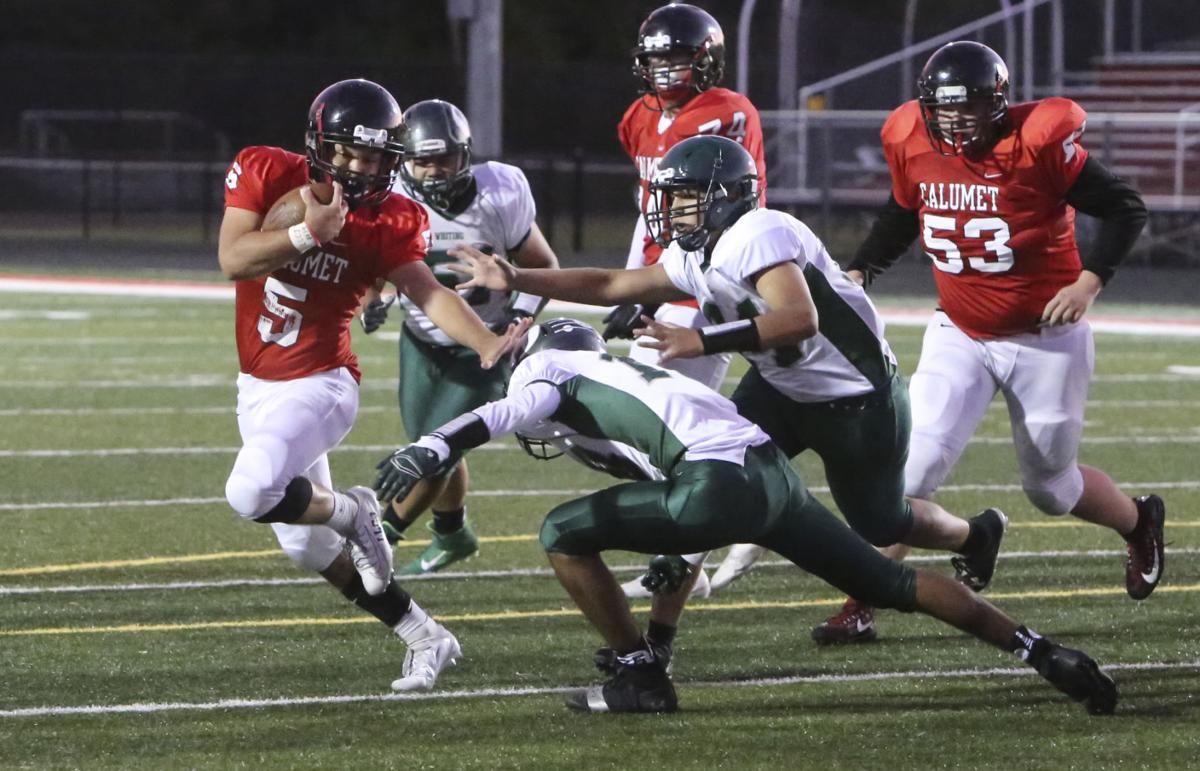 Calumet quarterback Mark Flores, left, dodges a tackle during a game against Whiting on Sept. 13, 2019. The Warriors will now face Andrean in Week 2 after the Illinois High School Association opted to move prep football to the spring. Calumet was originally supposed to play Mount Carmel (Illinois).