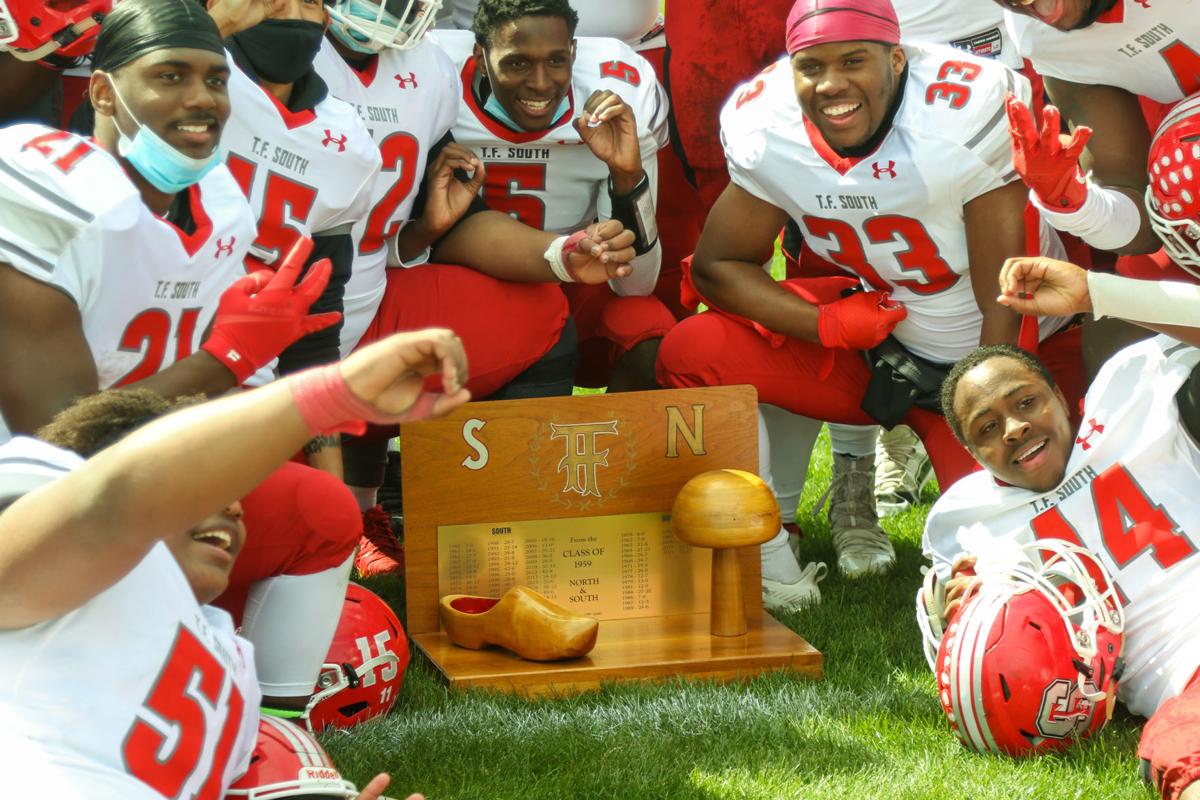 TF South players celebrate their win over TF North on Saturday by posing with the District 215 rivalry's Wooden Shoe/Mushroom Trophy. 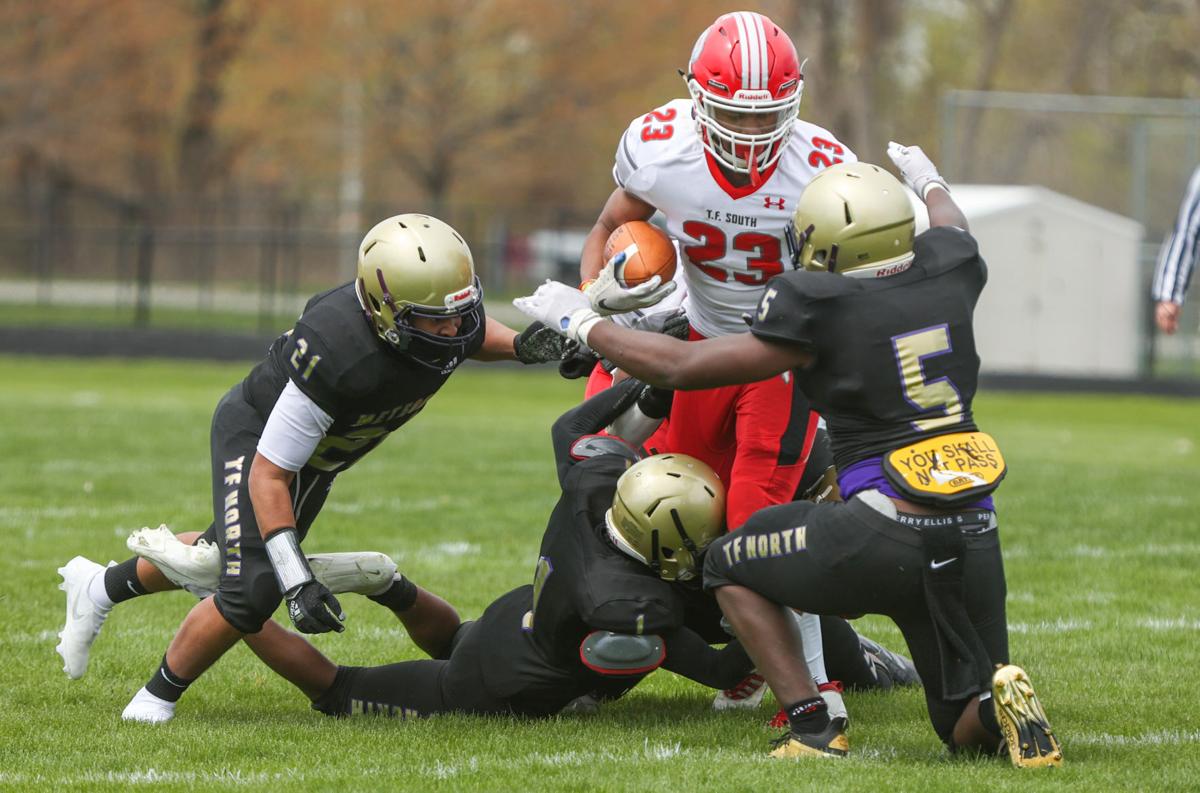 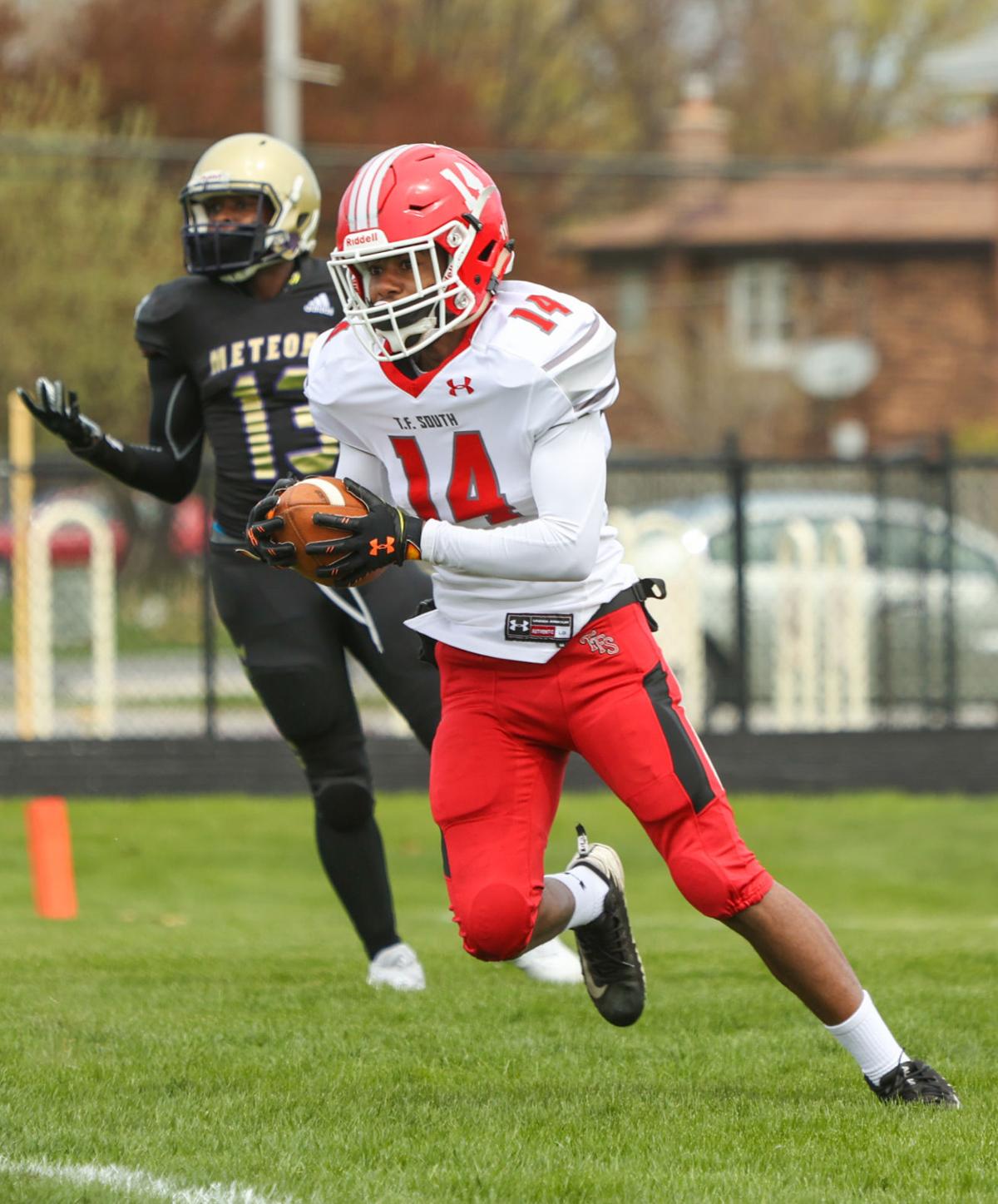 TF South's Ryan Coleman comes up with an interception Saturday against TF North. 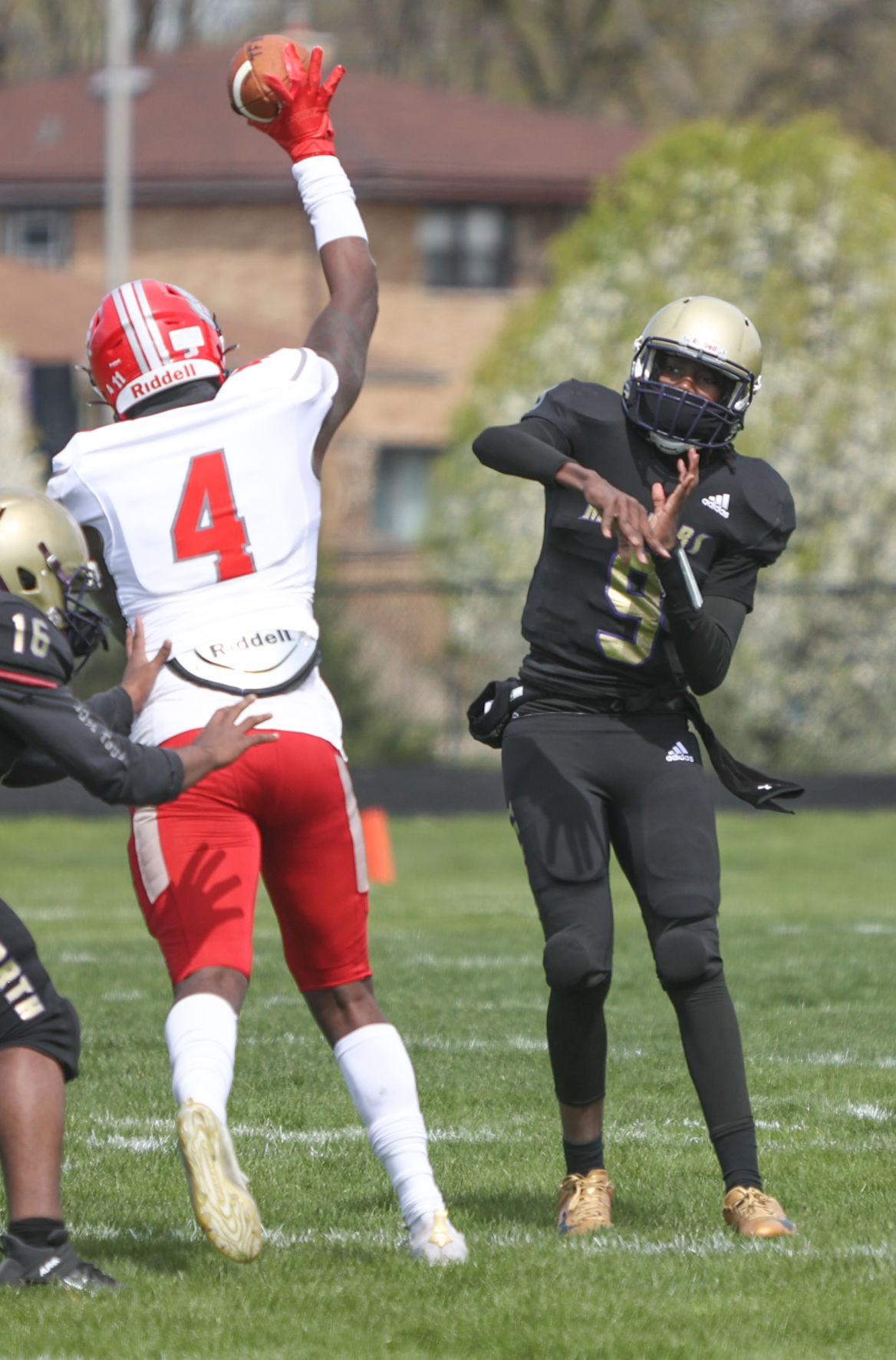 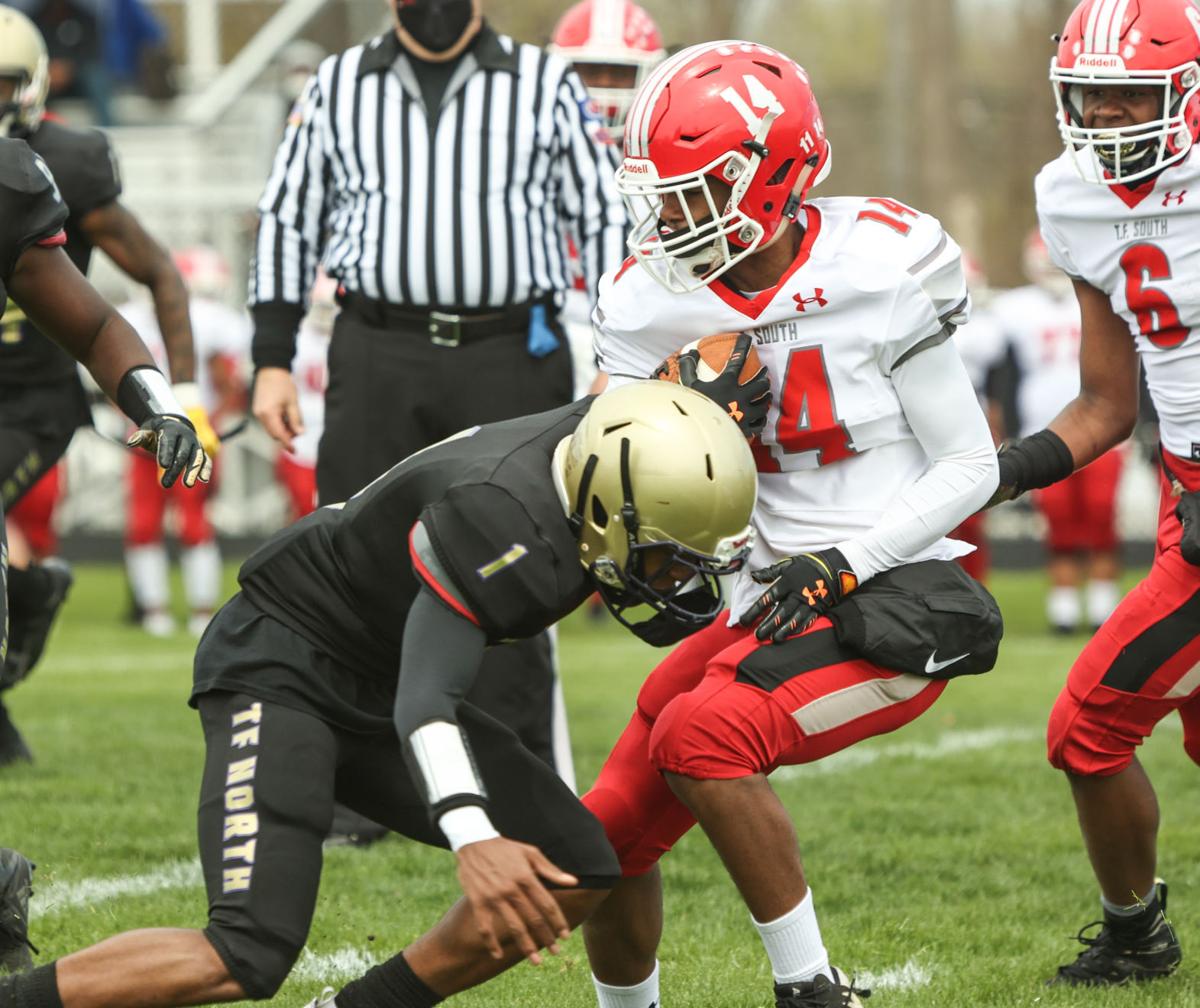 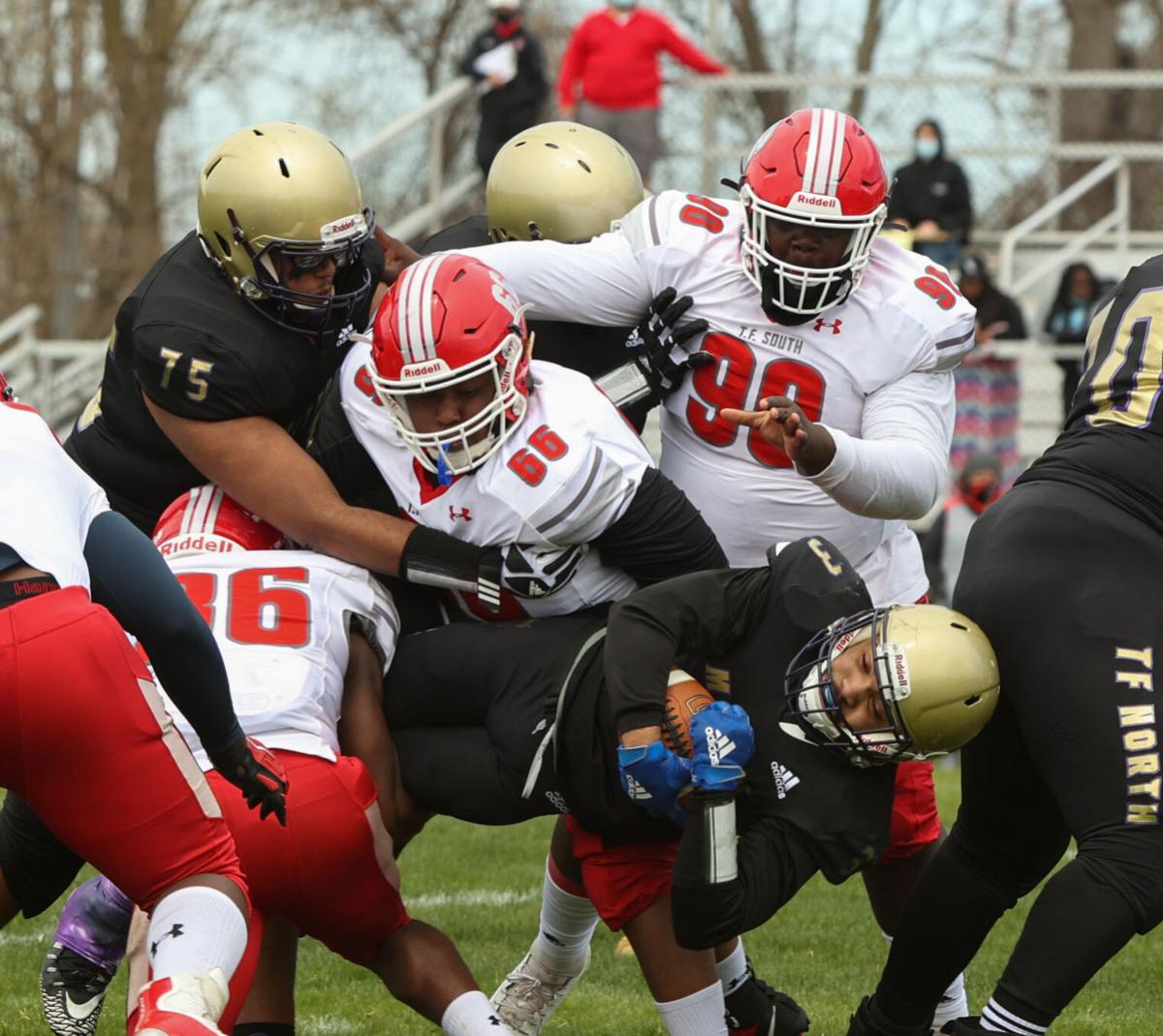 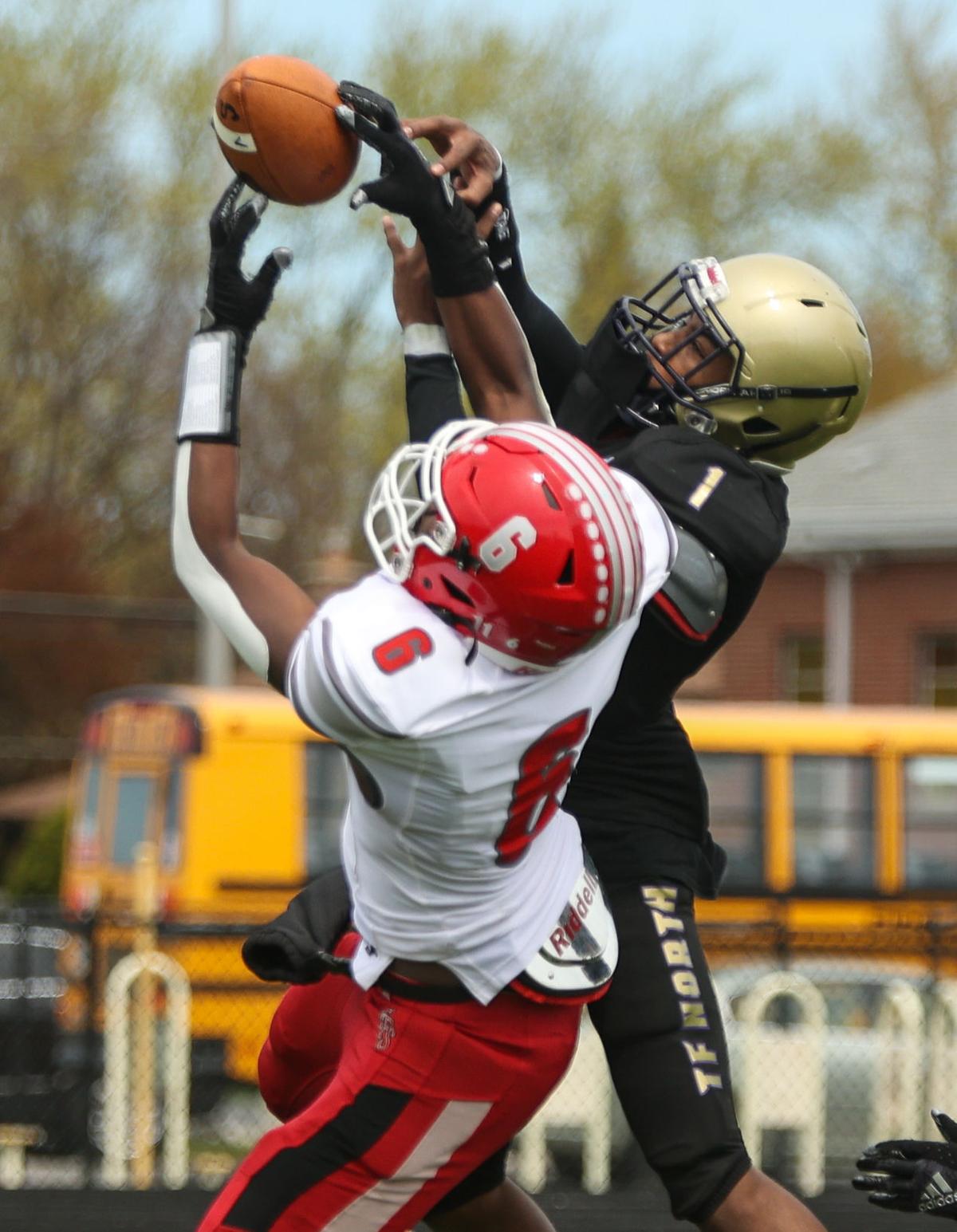 TF South's Devion Goodson tries to intercept a pass intended for TF North's Donald Tankson in the final play of the first half Saturday. 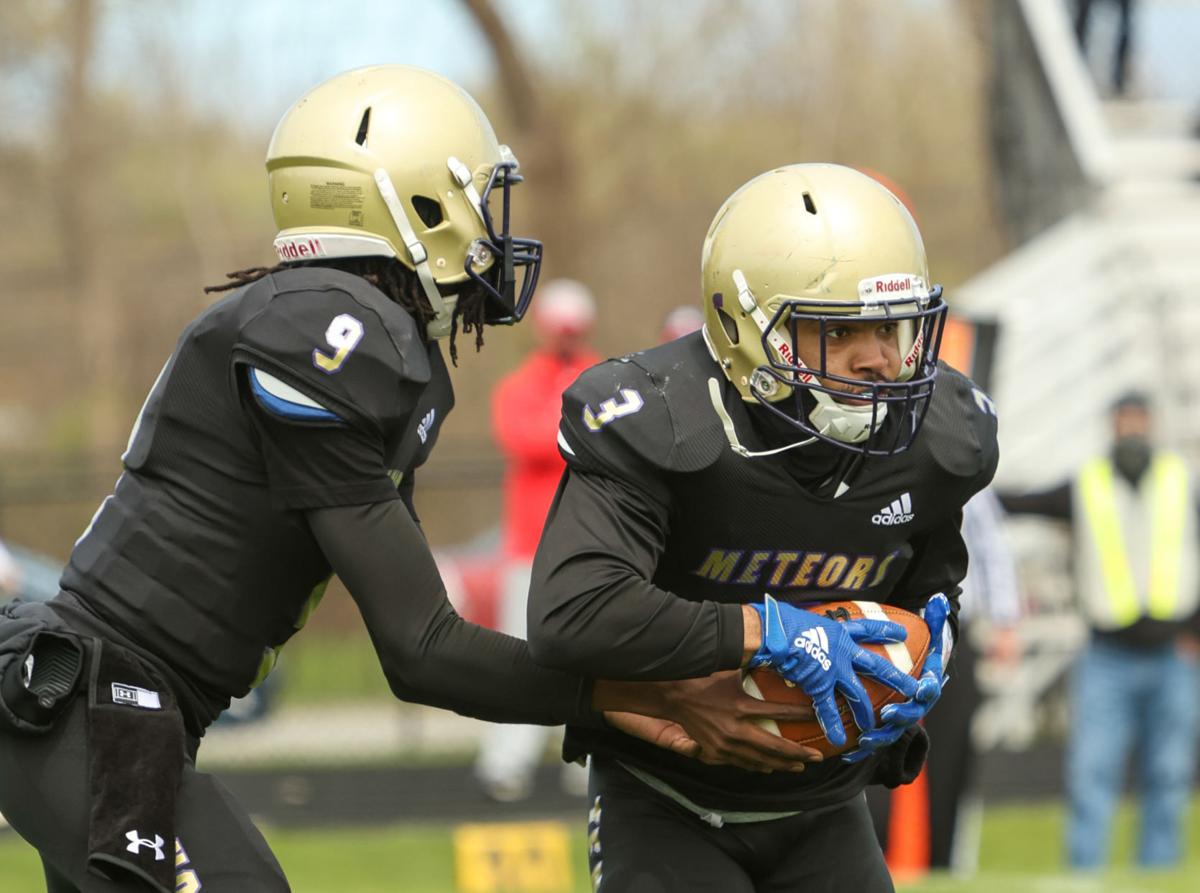 CALUMET CITY — The Wooden Shoe/Mushroom Trophy is heading back south on Burnham Avenue.

South (4-1, 4-1 South Suburban Blue) is allowing just under 12 points a game and hasn't given up more than 20 to an opponent. Its first two scores Saturday came courtesy of the defense: Temple's 77-yard interception return and Chris Cox's 70-yard return of a fumble forced by Temple.

On the interception, Temple said North quarterback Naiem Evans may have lost sight of him.

"I was hidden behind their offensive line," Temple said. "He threw the ball, I thought, 'It's my time,' I caught it and I took it back."

Cox said he was in the right place at the right time for his score.

Cox credited Da'Aveon Harris for providing the block that made the TD possible, even as he was slowing down. "I tried speeding up (but) I was already out of gas," Cox said.

Temple also ran 45 yards for a TD, marking the second time this season he's scored twice in one game.

He was more focused afterward on the team than on his individual numbers (11 carries, 62 yards).

"Last year we lost (the trophy)," Temple said. "We had to come back and prove we're the better team."

"North is not a bad team, they've got some playmakers," Cox said. "It feels good to have (the trophy) back at the crib."

Up 12-0 at halftime, South added a pair of offensive scores in the second half: Temple's run and Isiah Lewis' 7-yard pass to Wilson Buckley.

Buckley rushed for a game-high 74 yards on 15 carries, while Temple had 62 yards on 11 rushes.

North's best chance to score came on its first possession when Evans connected on a 59-yard pass to Jahnez Williams to the South 4-yard line. But North was pushed back to a fourth-and-goal at the 21, and Ryan Coleman's interception ended the drive.

"I can't wait to get back in the weight room and get the kids out here for track," North coach Tristan Stovall said. "We're young in too many places."

“When it comes to Region guys, you know what you’re going to get. That guy is going to be hard working, a blue-collar type that is very receptive to coaching.

TF North's Jahnez Williams glad to be back on the field

The Meteors went into quarantine after an official who worked their game against Lemont on April 2 tested positive for COVID-19.

TF South players celebrate their win over TF North on Saturday by posing with the District 215 rivalry's Wooden Shoe/Mushroom Trophy.

TF South's Ryan Coleman comes up with an interception Saturday against TF North.

TF South's Devion Goodson tries to intercept a pass intended for TF North's Donald Tankson in the final play of the first half Saturday.