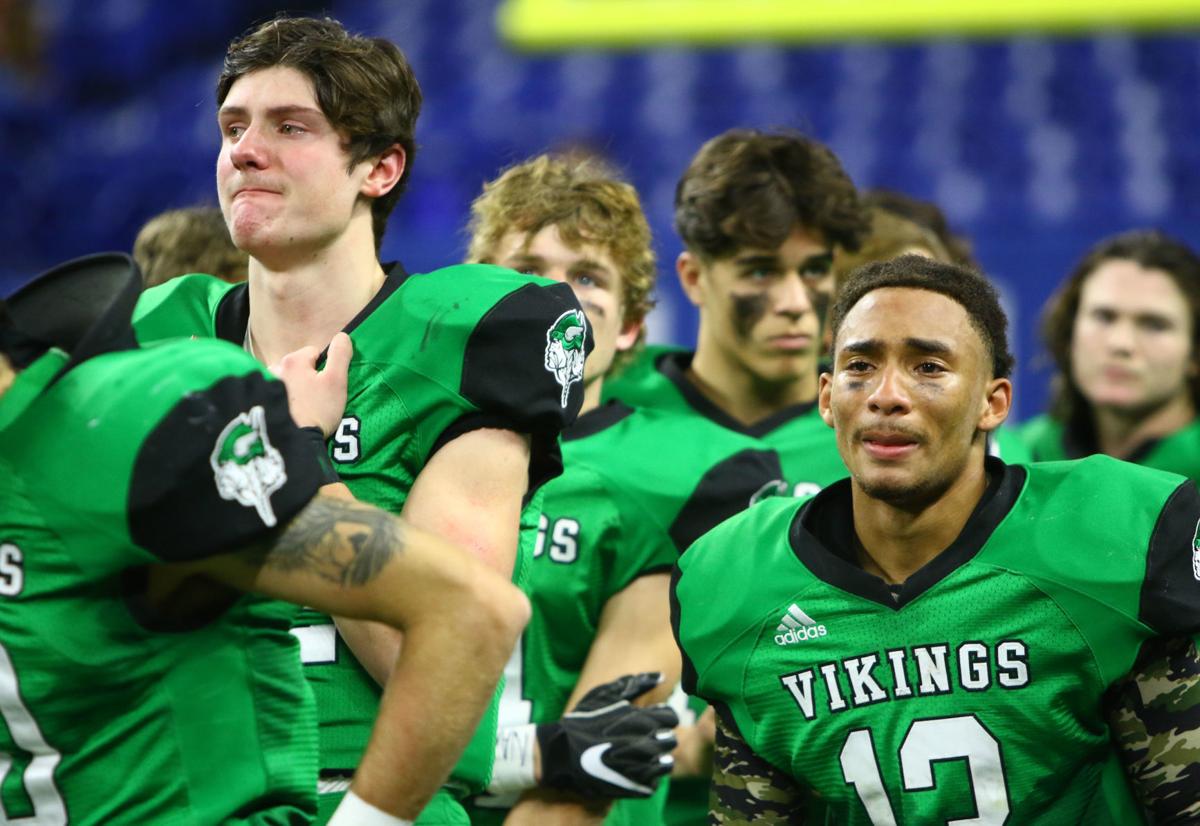 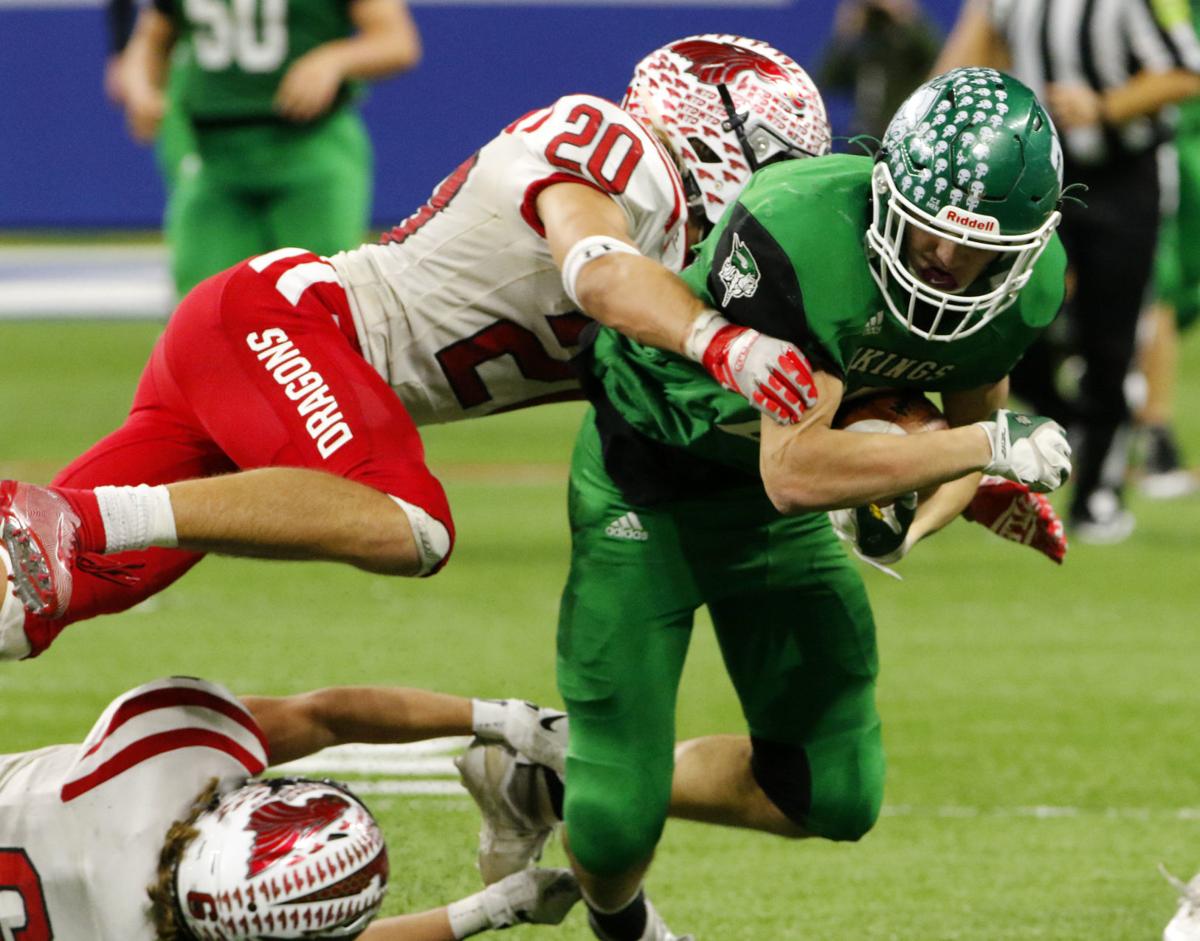 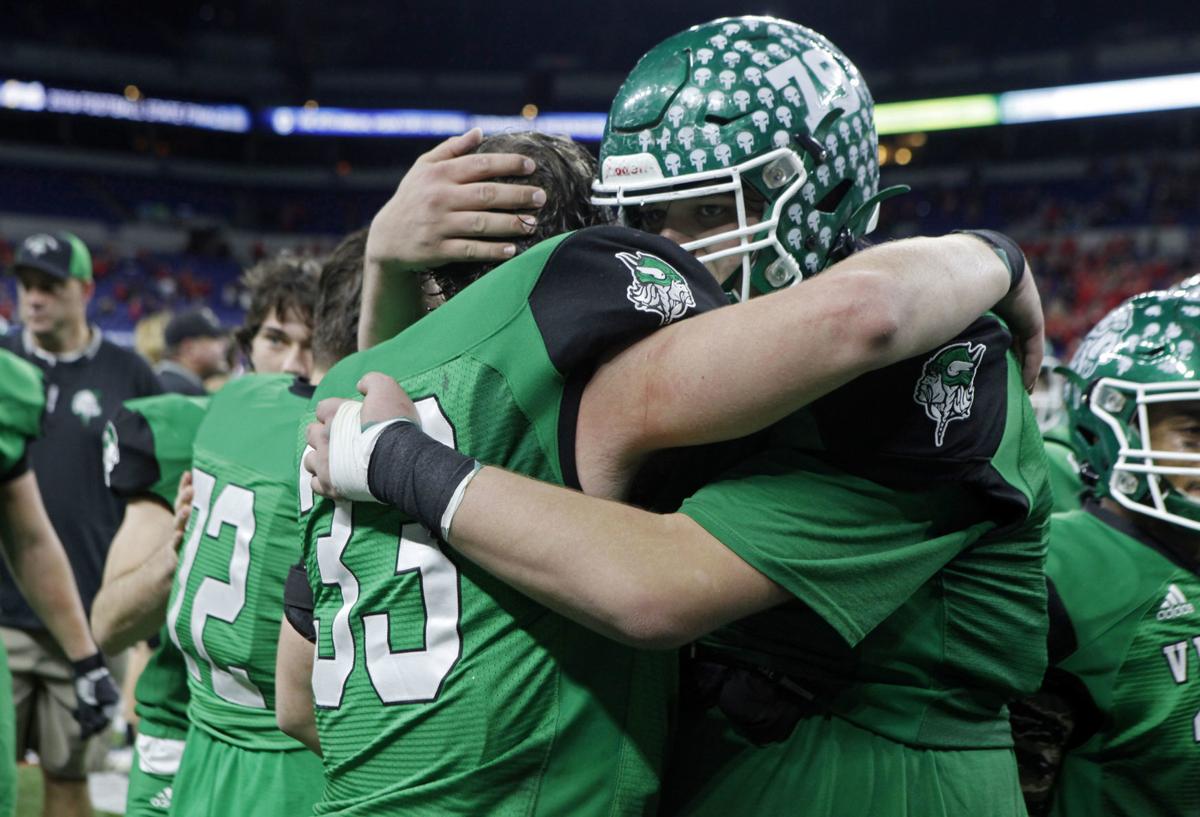 Valparaiso's Ben Scott, right, shares a hug with teammate Peyton Krutz Friday following the Vikings' 27-20 loss to New Palestine in the 5A state final at Lucas Oil Stadium in Indianapolis.

Valparaiso held New Palestine's star running back, who is the IHSAA’s all-time leading rusher, to 10 carries for 39 yards in the first half of Friday’s Class 5A state championship. But early in the third quarter, Spegal finally made his presence felt.

On the Dragons' first drive and play of the second half, the senior took an option pitch toward the home sideline, broke a few tackles at the line of scrimmage and then sprinted back across the field and down the visiting sideline for an 80-yard touchdown and his 55th score of the year.

Spegal's 175th career touchdown helped New Palestine (14-0) regain the lead in a back-and-forth contest, and the Dragons were able to hold on for their second straight state title. Their 27-20 victory marked the program’s second consecutive perfect season, while denying Valparaiso its first state crown since 1975.

Regardless of the loss, Vikings coach Bill Marshall had nothing but praise for his players and what they did for their school and community.

Spegal finished the game with 23 carries for 160 yards and one touchdown and ended his career with a state-record 10,867 rushing yards. But the standout senior wasn’t as productive as he had been in weeks past. Valparaiso held him under 200 rushing yards for the first time since Week 7 and his 160 rushing yards were his lowest output of the year.

Marshall commended his team for its defensive effort but acknowledged that turnovers in the second half proved to be the difference in the game. After Spegal’s score, Valparaiso trailed 17-10 with 8:54 left in the third quarter.

However, junior running back Tommy Burbee lost a fumble on the ensuing drive, which eventually led to a 20-yard field goal by New Palestine senior kicker Alex Kropp. A few minutes later, the Dragons scored again on a 34-yard pick-six by senior defensive back Ryker Large to give the defending Class 5A state champs a 17-point lead going into the fourth quarter.

Despite fumbling for the first time all year, Burbee still finished the game with 20 carries for 108 yards and one touchdown. The junior bounced back from his third quarter turnover and scored on a one-yard run at the 5:15 mark of the fourth quarter, and junior kicker Liam Shepherd converted a 38-yard field goal to bring the Vikings within one score with just over three minutes to play.

“I’m going to be honest, I had my head down after that fumble and I felt bad for the team and what I did,” Burbee said. “But all of my teammates and my family helped pick my head up, and they told me, ‘No matter what, I love you. Finish this, and do it for your seniors.'”

After the game, Burbee went over to thank his family for their support, and his father couldn’t be more proud. Tim Burbee played on Valparaiso's 1985 state-runner up football team and admitted that his son is a much better football player than he was.

Following Tommy Burbee's uncharacteristic fumble, Tim Burbee said he knew his son would make up for it and his hard fought 1-yard score in the fourth quarter verified that. The junior barely played on varsity last year but proved to be an integral part of the program’s first state final appearance in 18 years.

“Now that he’s experienced the big dance, I can only look forward to what he does in the future,” Tim Burbee said. “Tommy is determined and the most determined kid I know. He gives it 100% every chance he has, and he gives all of the credit to his team. Just being given the chance to be a part of a family like this is all he could have hoped for.”

The Vikings finished the 2016 season 5-5 and lost 35-7 to Penn in a Class 6A sectional opener. Three years later, Valparaiso (13-1) has not only rebounded but nearly pulled off its second undefeated season in school history.

It was evident that all of the seniors wanted to finish off the program’s remarkable turnaround with a state championship, and several of them fought back tears as they waited in line to receive their second place medals.

Peyton Krutz was one of those seniors and acknowledged that his emotions stemmed from both sadness and gratitude. He was disappointed that the Vikings weren’t able to leave Lucas Oil Stadium victorious but overjoyed that he closed out his prep career on his own terms.

In Valparaiso's second game of the season, Krutz dislocated his right ankle and the linebacker thought his senior campaign was over. 12 weeks later, he totaled eight tackles and two tackles for loss in the state title game.

“It’s just a dream come true,” Krutz said about his comeback. “I can’t give enough credit to my parents, my teammates and my coaches, who really just rallied around me and gave me the strength to rehab as strong as possible so I could get back out on the field."

VALPARAISO — Valparaiso, which is ranked No. 1 in The Times’ preseason top 10 rankings, can’t rely on the same personnel it had last year as the Class 5A state runner-up.

Quarterback CJ Opperman is no longer commanding the Vikings' offense, and wide receivers Luke Patterson and Antonio Osorio aren't hauling in any more touchdown catches. All three have graduated, but in their absence, Maximus Grimes is eager to prove his worth.

"It's a lot different than where I'm from, but I like it," Grimes said. "I feel like we have a real winning atmosphere here. Everybody here wants to win, and everybody is competing."

Grimes, who transferred from Lafayette Jefferson, has earned the starting role at quarterback for Valparaiso, and that shouldn't come as a surprise. Over the last two years, he's dominated opposing defenses to the tune of 5,340 passing yards, 68 touchdowns and nine interceptions.

Despite his gaudy stats, the 6-foot-2, 200-pound senior credited the success he's had throughout his prep career to the talented players he's been surrounded with.

That selfless mentality hasn't changed heading into his final high school campaign and is one of the main reasons why Grimes wasted no time linking up with wide receiver Blake Worthington.

"All summer we've thrown together, so we became pretty good friends pretty quick," Grimes said. "We did throw a lot, so we have good timing, and the fact that we both know the meaning of what we're doing (helps). He knows the route concept every time, and he knows why we're doing it."

Worthington, who also plays baseball, is the Vikings' lone returning starter at wide receiver and will most likely be their No. 1 target through the air. The 6-foot-2, 180-pound senior recorded 12 catches for 169 yards and two touchdowns last year and is confident that he can be more productive with an increased role this season — if a full season even takes place.

What a fluid football season could look like in 2020

The coronavirus pandemic has cast a cloud of uncertainty over the 2020 campaign, and five Region teams have already canceled their football seasons.

Worthington experienced the disappointment of losing a season firsthand when the IHSAA canceled spring sports April 2. So, now whenever he's on the field with Grimes and the rest of his teammates, there's an extra sense of appreciation and commitment behind every route he runs and every pass he catches.

"I feel like I lost a little bit of my high school time, you know? Because everybody wants to have a high school season," Worthington said. "It feels good to have a team again. I'm always with a team throughout the year, and that little time that I didn't have anything going on? I hated it.

"I love being with my family again."

Valparaiso coach Bill Marshall commended Worthington and Grimes for their dedication and leadership, especially considering the fluid circumstances the program has had to navigate because of the COVID-19 outbreak. The Vikings suspended their football workouts July 23 due to possible exposure and implemented a self-imposed moratorium until the first day of fall practice Aug. 3.

Since then, the team hasn't had any hiccups and was able to scrimmage Andrean at home Aug. 14. Although no fans were allowed to attend, Marshall believes it was a big step forward for his athletes.

"I think the best thing for us was getting our kids to realize that the season is upon us because what they're seeing (outside of our program) is a cancellation here and something being pushed back a few weeks there," Marshall said. " ... We had two people here livestreaming (our scrimmage), and to see the numbers on Facebook Live start going through the roof, it tells me that there's people in the community, too, that are excited that football is back."

Football is back: Scouting the Duneland Athletic Conference in 2020

Valparaiso will open its season Saturday at Penn, and Grimes and Worthington both said they can't wait to be back under the bright lights.

After losing 27-20 to two-time defending state champion New Palestine in the Class 5A state final last year, Worthington fully understands that returning to Lucas Oil Stadium isn't a sure thing. The coronavirus pandemic is the ultimate wild card, but if the Vikings are able to complete a full season, he likes their chances at potentially winning the program's first state title since 1975.

"We all really bonded last year, and it sucks to lose some guys. We had such a great year," Worthington said. "But it just shows that if we build a family, we can do it again.

"Getting a little taste of (the state championship) just makes us want it even more."

Valparaiso and New Palestine compete in the Class 5A state final at Lucas Oil Stadium in Indianapolis.

5 important stories you need to know from the weekend: East Chicago man whose body was found in lake suffered stab wounds, coroner says

The Vikings may have lost Friday's Class 5A title game 27-20 to New Palestine, but Marshall and the Class of 2019 led the program from turmoil to prominence.

Valpo ties score late in first half against New Palestine

New Palestine hadn’t played in many close games this year, but in the first half of the Class 5A state championship, Valparaiso held tough.

Valparaiso may be losing a deep and talented senior class, but the Vikings return multiple key pieces and say they're as motivated as ever.

Valparaiso's Ben Scott, right, shares a hug with teammate Peyton Krutz Friday following the Vikings' 27-20 loss to New Palestine in the 5A state final at Lucas Oil Stadium in Indianapolis.