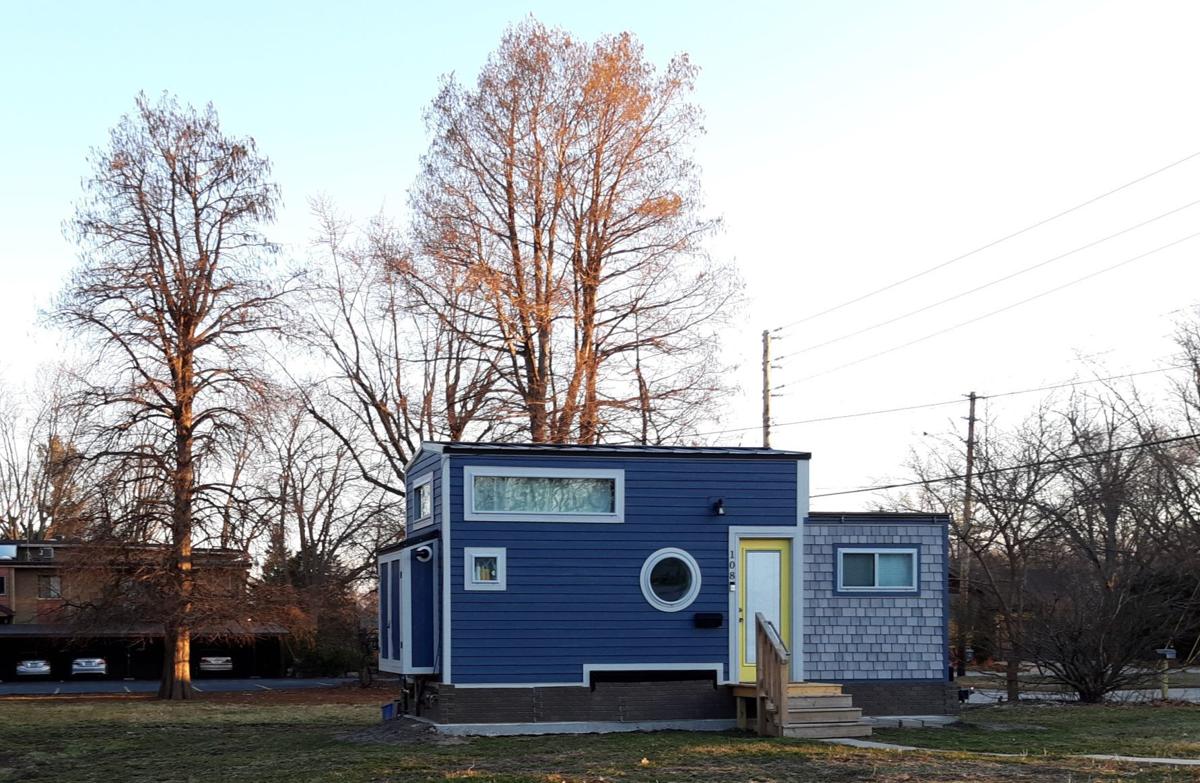 Erica and Jake Markiewicz live in this "tiny house" in Schererville. The 210-square-foot home is the recently married couple's first. 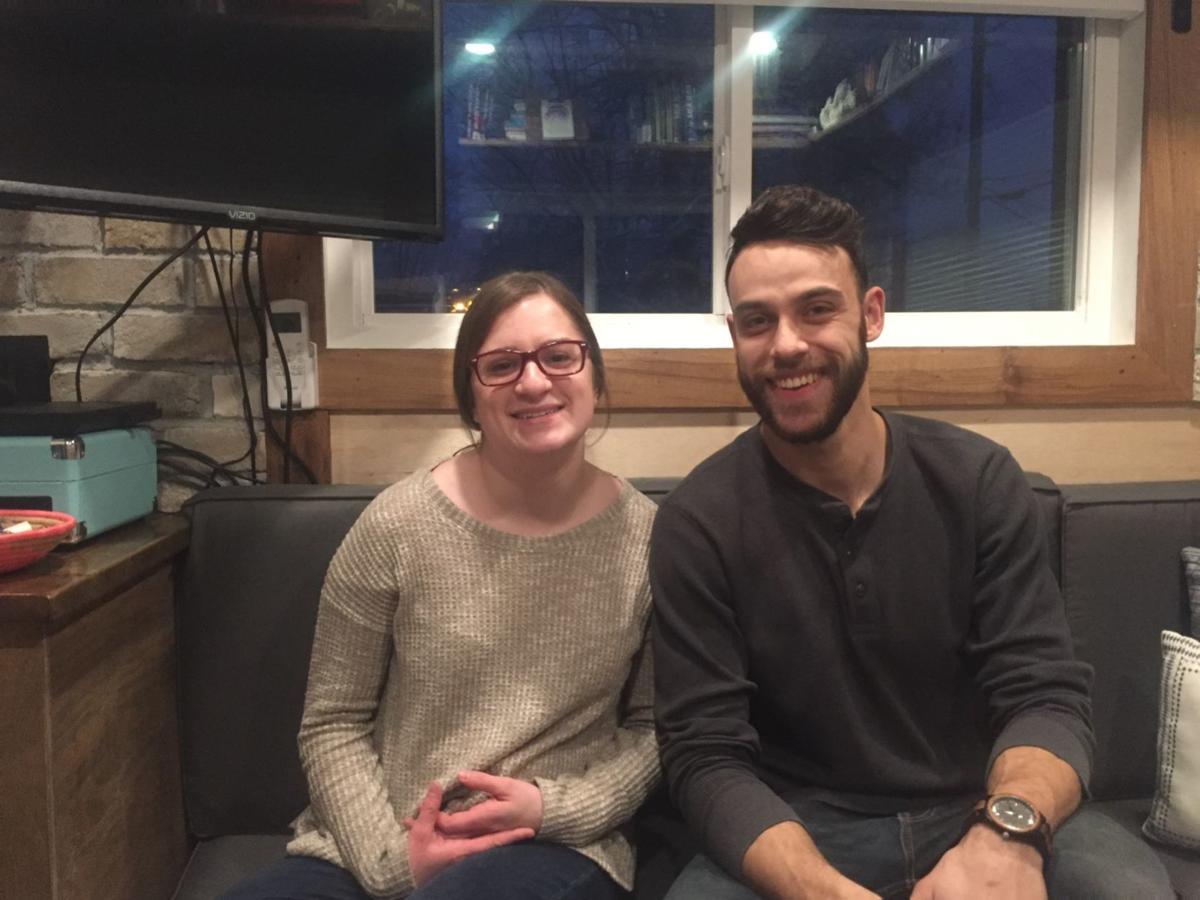 Erica and Jake Markiewicz are shown in their Schererville home. 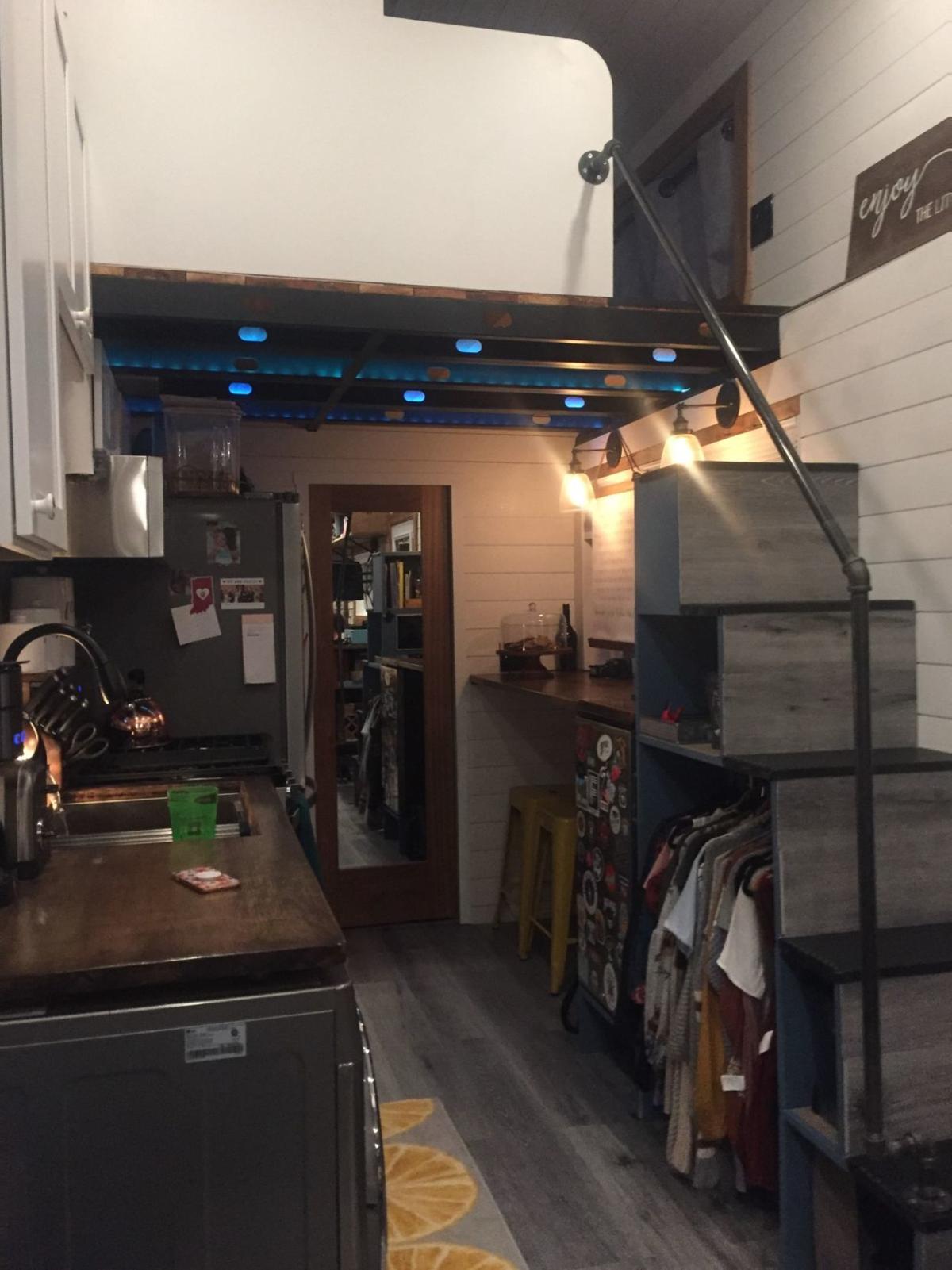 Space is at a premium in tiny homes, including Jake and Erica Markiewicz's in Schererville. 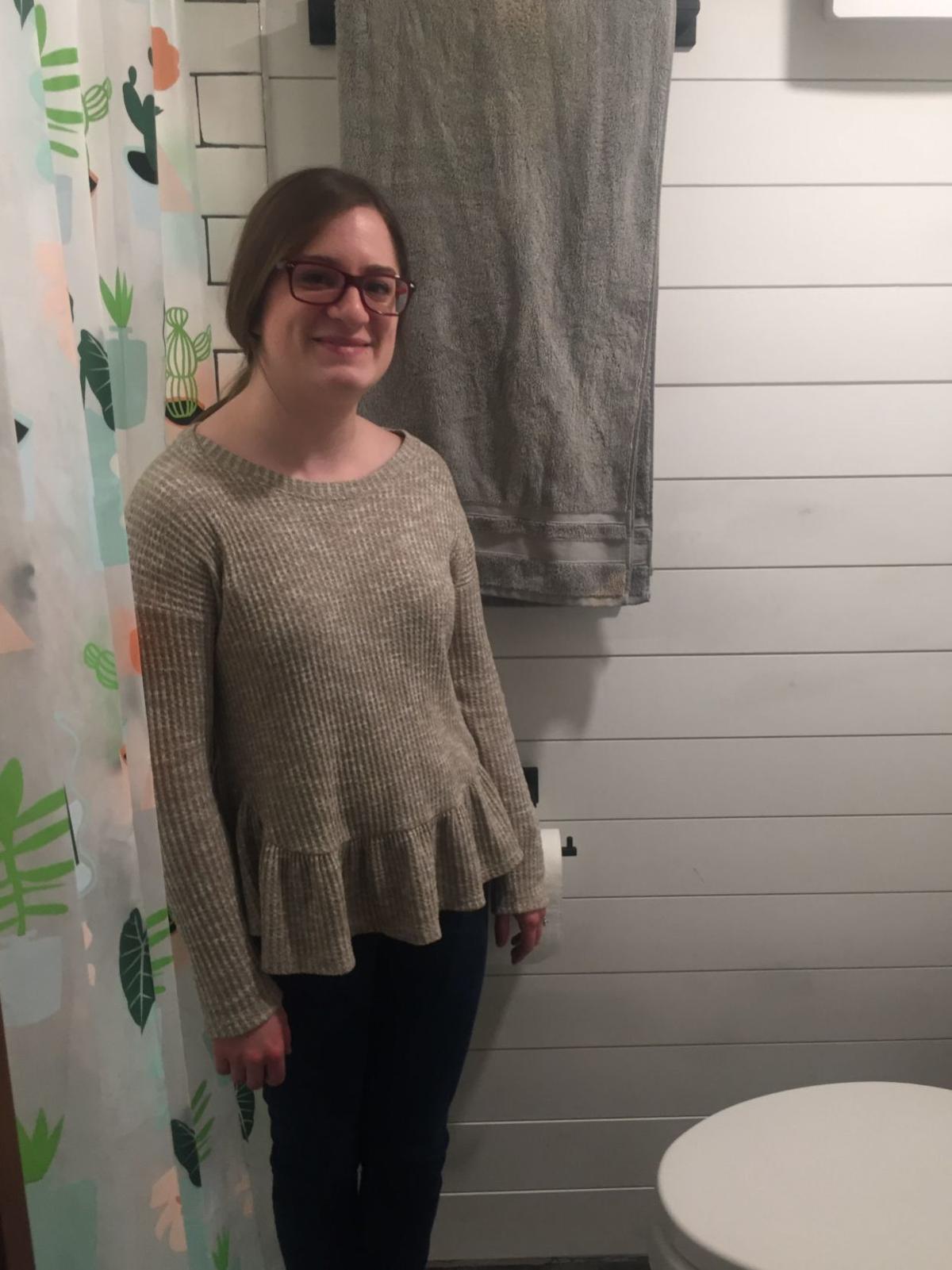 Erica Markiewicz is pictured in her Schererville home. 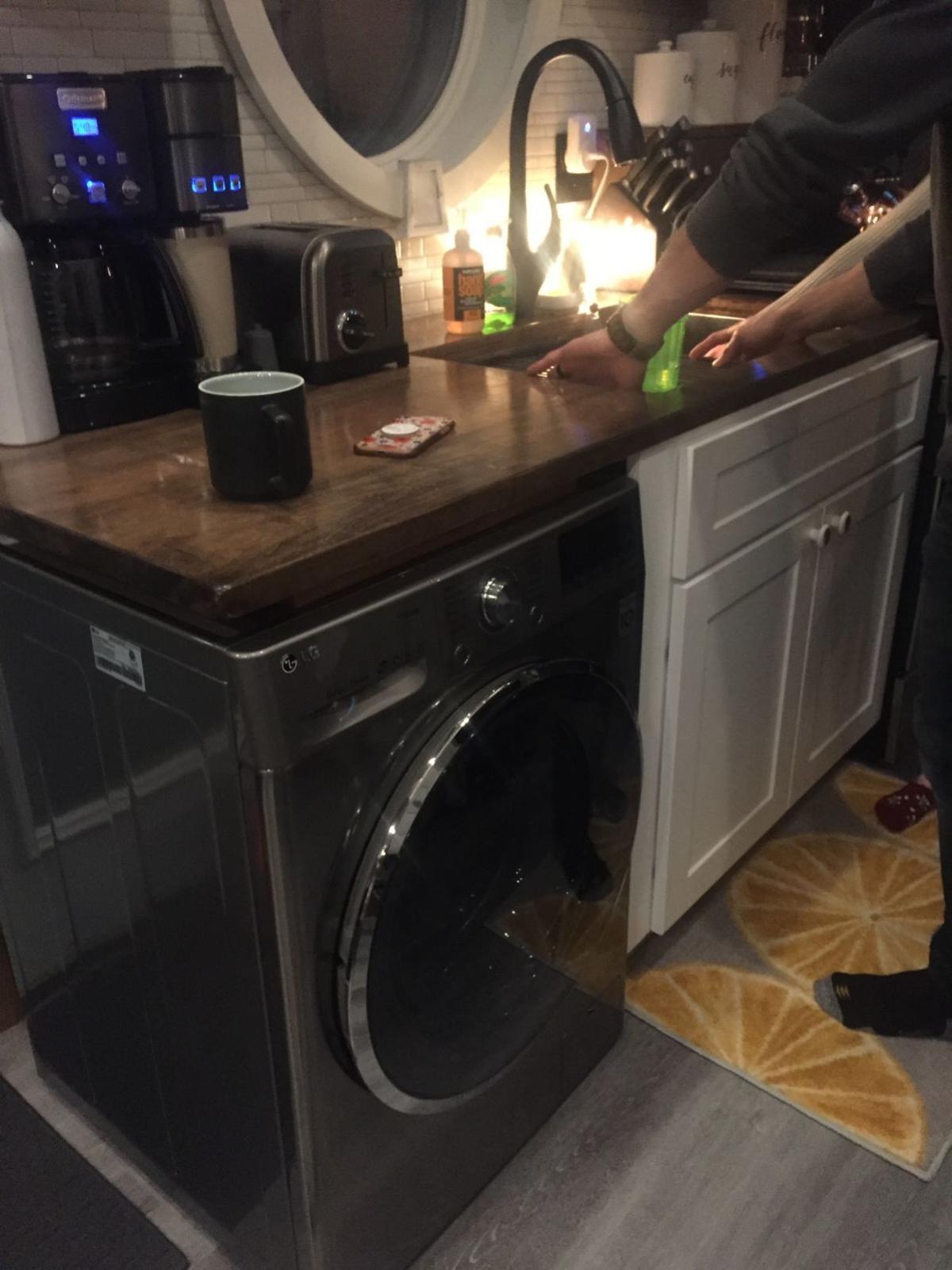 The kitchen space in Jake and Erica Markiewicz's Schererville home includes the washing machine. The tiny home is located near downtown.

It’s safe to say that Erica Markiewicz was a fan of the show “Tiny House Nation” on the A&E Network.

“I watched it all the time, and I told my husband I thought the houses were a good idea,” Erica said. “But he took the idea a lot further than I originally intended.”

Indeed, Erica’s husband, Jake, started drawing up plans for a tiny house to be placed in Schererville near their families. Now, the couple, both 27 and married a year ago, are firmly ensconced in the tiny home, and are loving it, according to Jake.

The homeowners met in grade school. After Jake made the plan for the tiny house, he shared the idea with his boss, Mark Peifer, who helped with the building through his business, Beautyguard Building Products, which helped supply materials.

While in the process of building, Jake contacted Trailer Made Steel Framing in Olathe, Colorado, for the home framing. He then went to Maverick Tiny Homes in Ohio to complete the deal. Maverick, in Eaton, Ohio, supports those who want to design their own homes with tiny home trailer foundations and fully completed exterior shells.

Damon DesChamp, owner of Trailer Made Steel Framing, came to building steel tiny house frames in a roundabout way. His company started in the auto industry, but when there was a slow day, he had his workers cut up some steel and make a trailer. It sold quickly and a new business was born.

DesChamp said he sees the tiny home industry as a great way to live for people in all walks of life. It’s also affordable.

Jake agrees, but, said it was a little time consuming to set up the trailer.

“We assembled the framing in Cedar Lake because it arrived in pieces,” Jake said. “It was like a giant Erector Set.”

They also needed permission from the town to put the home on the Joliet Street lot. The Board of Zoning Appeals approved it with the stipulation the couple remain on the site for two to four years, after which the house would have to be removed. The board required it to be on a concrete slab, and for the wheels to be removed while it is on the property.

When all was finished and the blue, 210-square-foot tiny house was put on the lot owned by Jake’s friend, it became the perfect "home on wheels" for the young Northwest Indiana couple. It had all the bells and whistles, such as new appliances, wood counter tops and a movable table for storage or sleeping, and the utility bills came to just $34 a month.

The Markiewicz home has been up for a few months.

“We picked Schererville because we are excited about our new neighbors, the new bike path and living closer to family,” Jake said.

Erica, who works in Munster and Dyer and attended Indiana University, agrees.

The couple often have as many as eight people in their home for game nights.

The two eventually look to Colorado for a possible permanent move in a few years where they will pick up the wheels and move their home along.

But what happens when the couple have a squabble?

SCHERERVILLE — The big news in Schererville is a little house.

Erica and Jake Markiewicz live in this "tiny house" in Schererville. The 210-square-foot home is the recently married couple's first.

Erica and Jake Markiewicz are shown in their Schererville home.

Space is at a premium in tiny homes, including Jake and Erica Markiewicz's in Schererville.

Erica Markiewicz is pictured in her Schererville home.

The kitchen space in Jake and Erica Markiewicz's Schererville home includes the washing machine. The tiny home is located near downtown.