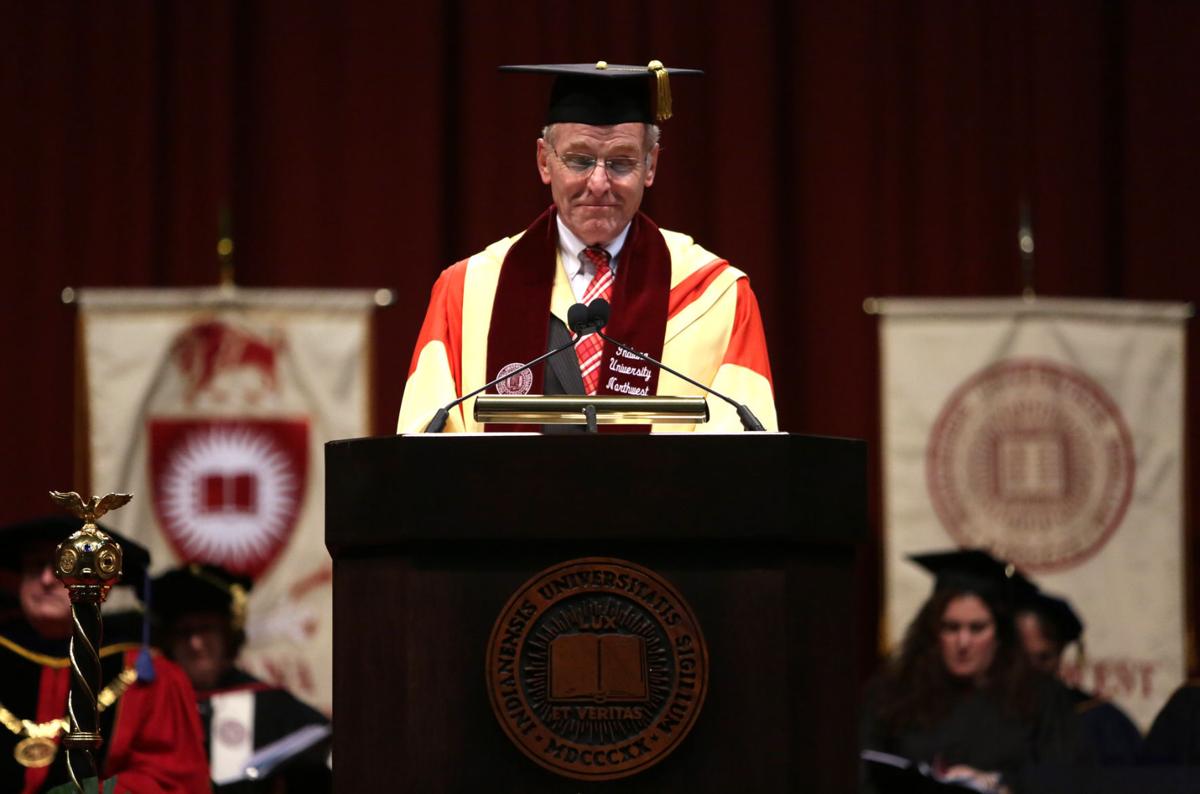 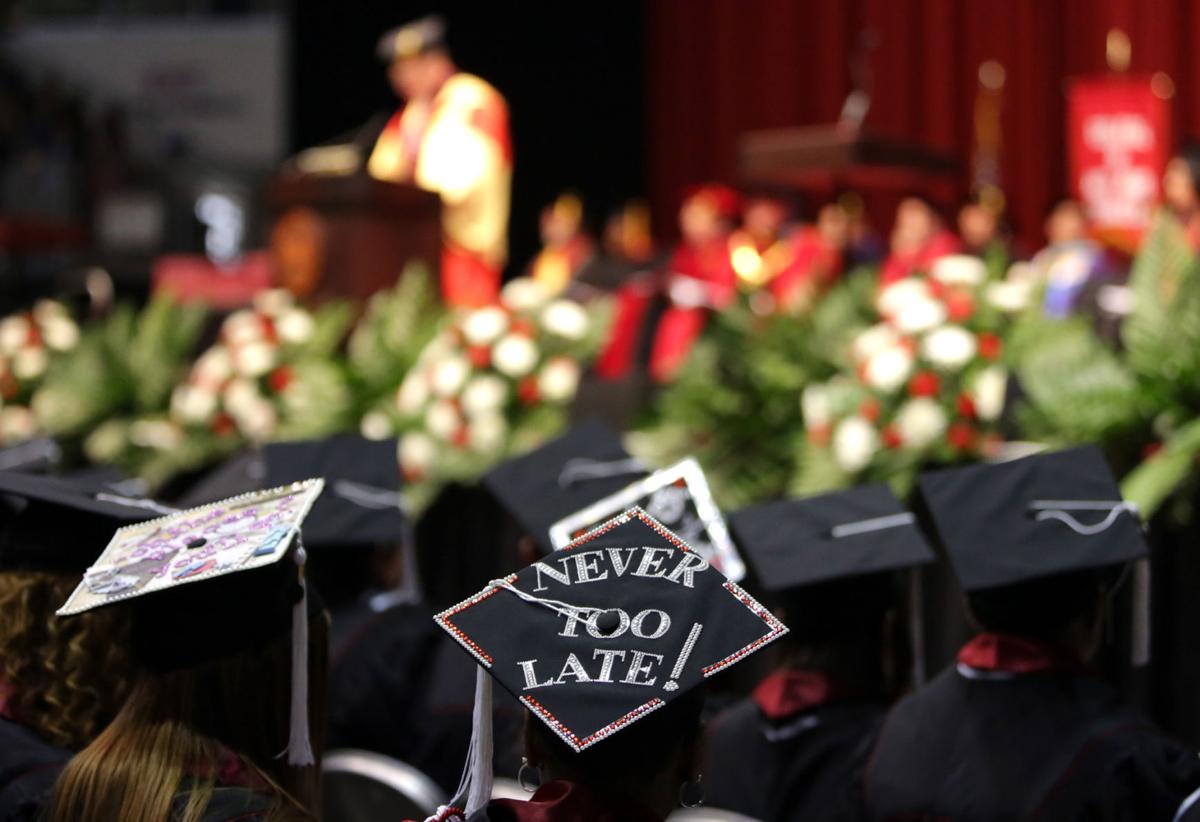 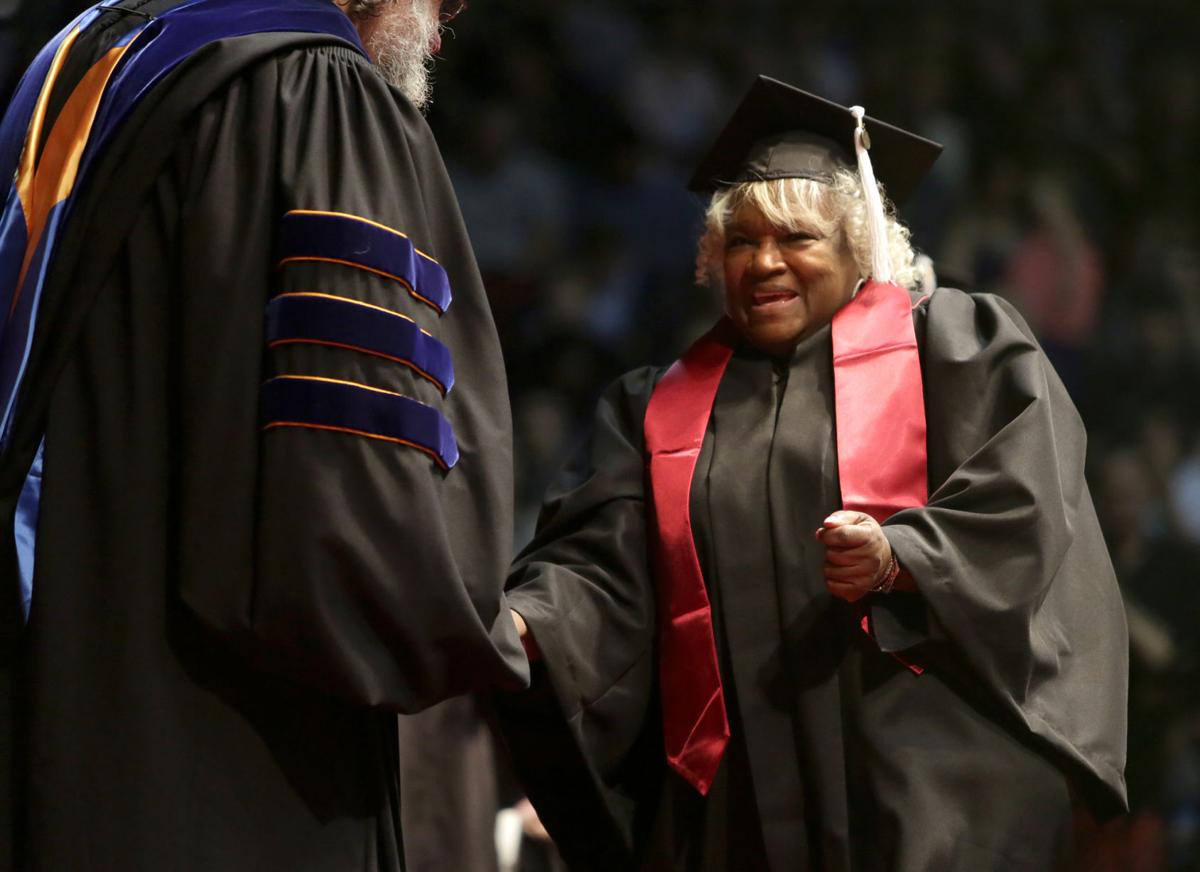 Indiana University Northwest graduate Jacqueline Neal, 74, walks across the stage to receive her diploma Thursday during the university's commencement ceremony at the Genesis Convention Center in Gary. 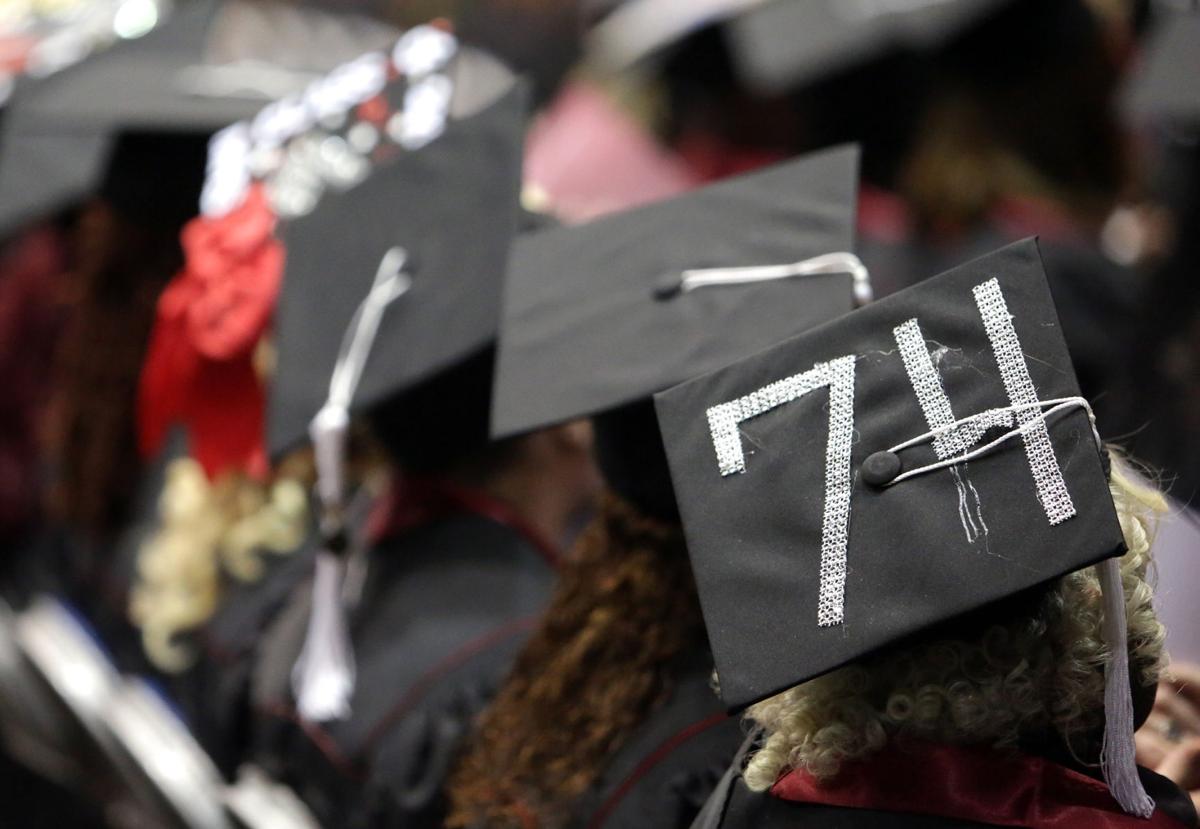 GARY | The day was overcast, but the future was bright, so far as Indiana Northwest University graduates were concerned.

IUN’s 49th annual commencement was held Thursday afternoon in the Richard Gordon Hatcher arena at the Genesis Convention Center in Gary. Parking was scarce, but families gamely traversed many streets and parking lots to reach the front entrance. They even purchased balloons and roses from vendors who waited outside the Genesis Center.

Seven hundred and ninety degrees were to be handed out: 609 of them were bachelor’s, 106 master’s. The remaining 75 were associate degrees. The College of Arts and Sciences, School of Business and Economics, School of Education and College of Health and Human Services were represented, as graduates marched in to the traditional strains of “Pomp and Circumstance.”

Many graduates had festooned their hats with color, glitter or letters identifying the kind of degree they’d be getting. Despina Amanatidia, past president of the Indiana University Northwest Alumni Association, sang "The Star-Spangled Banner" to open the program, and later, “Hail to Old IU” to close it.

*“We’re grateful to the people of Indiana for their support,” said IU President Michael McRobbie. “Look around you,” he instructed graduates, “At the friends and family who’ve given you support.”

“Today is our opportunity to celebrate you,” said Chancellor William Lowe, who took the podium next. Lowe celebrated the diversity of the IUN student body: 40 percent of them were students of color and 50 percent were the first in their family to graduate from college. Ninety percent of them worked while in school and a third are 30 years old or older, he said.

Lowe also singled out graduates whose achievements were particularly remarkable. The graduating class’ most mature student was Jacqueline Neal, 74, of Gary. Neal graduated Thursday with a Bachelor of General Studies.

*Lyndee Govert, 34, a wife and mother, graduated with two bachelor’s degrees, one in math, the other in education. “From one educator to another, I salute your success,” Lowe said.

Jaclyn O’Connell, of Cedar Lake, graduating with a bachelor’s degree in biology, gave the student address. She remembered giving the commencement address at her eighth grade graduation, and again at her high school graduation. Always while giving a commencement address she has imparted some of the life lessons she has learned so far. And she could do no less at this, her third commencement.

“Life is a collection of moments spent one moment at a time,” she said. In keeping with her eighth-grade commencement choice, she also quoted Dr. Seuss: “You have brains in your head, you have feet in your shoes. You’re on your own, you know what you know.”

Lowe, in taking the podium back, said he had to mention, “The wife of Dr. Seuss is an Indiana graduate of the School of Medicine.”

*Editor's note: This story has been corrected from an earlier version.

*“We’re grateful to the people of Indiana for their support,” said IU President Michael McRobbie. “Look around you,” he instructed graduates, “At the friends and family who’ve given you support.”

*Lyndee Govert, 34, a wife and mother, graduated with two bachelor’s degrees, one in math, the other in education. “From one educator to another, I salute your success,” Lowe said.

WATCH NOW: Barber goes from $5 fades in his grandma's Hammond kitchen to cutting the hair of White Sox stars

A Hammond native who started out cutting hair for $5 in his grandparents' home is giving haircuts in a tricked-out Mercedes truck to White Sox stars like Yoan Moncada, Jose Abreau and Luis Robert.

UPDATE: Franciscan Health Hammond Hospital to be shrunk to a tenth its size: 'This is an extremely sad day for Hammond'

Franciscan Health plans to significantly downsize and demolish a portion of one of the largest and longest-running hospitals in Northwest Indiana, which will be reduced to a fraction of its size.

A new concert and wedding venue is going to rock in the long-struggling Griffith Park Plaza in north Griffith.

Indiana University Northwest graduate Jacqueline Neal, 74, walks across the stage to receive her diploma Thursday during the university's commencement ceremony at the Genesis Convention Center in Gary.