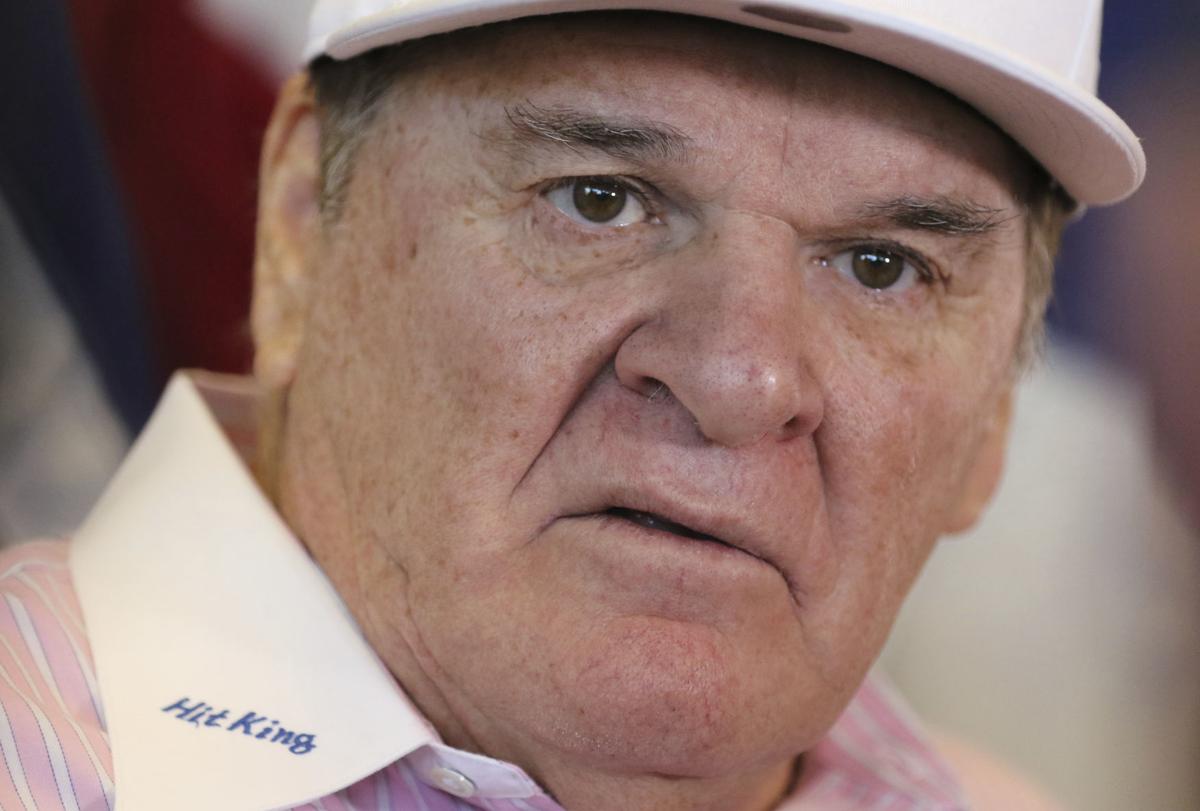 Former player and manager Pete Rose, shown here in 2006, was inducted into the Reds Hall of Fame in Cincinnati. He was suspended for life by Major League Baseball for betting on the game.

Pete Rose, baseball's all-time hits leader (4,256) who is shown batting Aug. 2, 1978, said cheating on the field is bad for the game, and the one thing he never did with his bets is change the outcome of a game.

Pete Rose, shown hustling for the Philadelphia Phillies in an iconic photo June 3, 1981,  said his bets didn't change the outcome of a game.

Former Cincinnati Red Pete Rose waves to the crowd as he is introduced on the field during a ceremony to honor the 1976 World Series champions team, before the Reds' baseball game against the San Diego Padres on June 24, 2016 in Cincinnati.

LAS VEGAS — Pete Rose was taking a break from signing autographs at the MGM Grand hotel when asked a question he’s uniquely qualified to address.

What’s worse, betting on baseball or cheating at baseball?

It’s a fair point, especially when compared to the punishments handed out so far in the worst scandal to hit baseball since the steroid era. What Rose did was wrong — according to baseball rules — but there’s still a lot of people who believe he should be adding a Hall of Fame designation when he signs memorabilia in his adopted hometown of Las Vegas.

Still, 30 years away from the game he was so great at seems like an awful long time, especially when Major League Baseball and other sports leagues have made their peace — and are doing business — with the bookies who post lines on their games.

And face it. If you believe Rose on the details of what he did — and that’s a stretch for some — his betting didn’t have nearly the impact on baseball than a cheating scheme that has brought into question the legitimacy of not just one, but two, World Series.

“Which one is worse, stealing signs electronically, taking steroids or betting on baseball?” the all-time major league hit leader asked. "All three are bad. But at least what I did never had anything to do with the outcome of the game."

The Houston Astros cheating scandal, of course, is still new, at least publicly. A week ago, no one was questioning whether the Astros were really the 2017 champions or the Boston Red Sox a year after that.

Now it’s all in play, and the discussion is beginning to turn to how the sign scandal ranks with other scandals in baseball history.

Pretty high up with each passing day, if only because there are few comparable scandals and two of them involve gambling. The Black Sox scandal of 1919 and Rose betting on baseball games from the dugout in Cincinnati are about the only ones that come close.

There’s also the steroid era, where it was hard to figure out what was real and what wasn't. The players themselves weren't much help, sticking up for teammates and for the most part claiming ignorance of steroid use.

The unwritten baseball code of silence, though, seems to be unraveling quickly with the sign-stealing scandal. That began in November when former Houston pitcher Mike Fiers went on record to The Athletic about the scheme the Astros employed during his time there to steal signs.

Los Angeles Dodgers pitcher Alex Wood, who was careful to hide his signals in allowing one hit in 5 2/3 innings of Game 4 of the World Series, tweeted that he would rather pitch to a player on steroids than one who knew which pitch was coming. That sentiment was echoed by Cincinnati Reds pitcher Trevor Bauer, who added, “All day every day for the rest of time."

National League MVP Cody Bellinger went even further, saying there needs to be major consequences for any players involved.

“That Completely ruins the integrity of the game!!!” Bellinger tweeted.

Rose said he wished the scandal wasn't playing out a month before pitchers and catchers report for spring training. He predicted Commissioner Rob Manfred will have a hard time dealing with the fallout.

But he agreed with Bellinger that if players are guilty, they need to be punished, just as he was.

“If you’re the batter and I give you the indicator, aren’t you just as guilty being the batter?” he asked. “It’s the batter who is benefiting from this, not the guy who was the indicator. You have to look at every player on the team.”

Rose, who turns 79 in April, said there was sign-stealing during his time, though without technology. Mostly, it was a base coach figuring out sign sequences and a runner at second relaying them to the batter, and there were accepted ways to make it stop.

“Usually what would happen is the pitcher would throw it right at a guy’s head,” he said. “Ninety of 100 would stop because they don’t want that chin music.”

But while Rose was guilty of doing things not in the best interest of baseball, he said he wasn’t much of a sign thief.

“I batted 15,000 times and I never wanted a guy on second to tell me what was coming,” he said. "I didn’t want to know because he might be wrong and I wasn't a guess hitter anyway so it wouldn’t have helped me much."

It did help, Rose said, the home run hitters who liked to guess on what pitches were coming. And that, he added, holds true today.

“It’s a bigger thing for home run hitters,” he said. “I played with a lot of guys who were home run hitters and you tell them what's coming and they would hit it out of Yellowstone Park.”

XFL kicks off to fanfare in Washington

WASHINGTON — The debut of the new XFL had a punt blocked for a touchdown, a juiced-up crowd roaring for big plays and a player swearing during an in-game television interview.

CARSON, Calif. — On to the next goal.

PHOENIX — Tony Valdovinos didn't know he was in the U.S. illegally until he tried to join the Marine Corps at 18 and learned he was born in Mexico.

WEST PALM BEACH, Fla. — Count Washington Nationals general manager Mike Rizzo among those not impressed or satisfied by the Houston Astros' attempts to apologize for — and put behind them — their sign-stealing scandal.

LeBron James is considering a return to the Olympics.

DAYTONA BEACH, Fla. — Kevin Harvick put a mic drop on his TV broadcasting career and turned off the dial on his radio show. The moonlighting gigs have been parked, minimizing his distractions, maximizing his family time, but certainly not accelerating any thoughts about retirement.

Former player and manager Pete Rose, shown here in 2006, was inducted into the Reds Hall of Fame in Cincinnati. He was suspended for life by Major League Baseball for betting on the game.

Pete Rose, baseball's all-time hits leader (4,256) who is shown batting Aug. 2, 1978, said cheating on the field is bad for the game, and the one thing he never did with his bets is change the outcome of a game.

Pete Rose, shown hustling for the Philadelphia Phillies in an iconic photo June 3, 1981,  said his bets didn't change the outcome of a game.

Former Cincinnati Red Pete Rose waves to the crowd as he is introduced on the field during a ceremony to honor the 1976 World Series champions team, before the Reds' baseball game against the San Diego Padres on June 24, 2016 in Cincinnati.