On Sunday, Ford unveiled its new all-electric Mustang Mach-E crossover SUV. With its emphasis on affordability and performance, the newest member of the Mustang family appears to be a pointed attempt by Ford to take on Tesla.

One thing that Ford has apparently learned from Tesla is that boring electric vehicles don't sell.

The Mustang Mach-E GT Performance models will get an estimated 459 horsepower, Ford claims, from two electric motors, one powering the back wheels, the other powering the front. Those motors should be able to make the Mach-E go from zero to 60 miles an hour in roughly 3.5 seconds, a time similar to a Porsche 911 GTS. The Tesla Model 3 Performance, meanwhile, produces 450 horsepower and the upcoming Model Y SUV is expected to share much of the same engineering.

For the time being, Ford's electric vehicles still qualify for the $7,500 federal tax credit, Ford executives said. They expect Mach-E buyers will be able to get that full tax credit for at least the first year it's available.

Ford expects Extended Range versions of the Mach-E with 332 horsepower to get an EPA-rated range of at least 300 miles. The standard range version will go about 239 miles, said Ted Cannis, Ford's director of electrification. Prototype vehicles are still undergoing testing and refinement, he said.

Overall, the Mach-E will have the best driving dynamics of any SUV Ford has made yet, Cannis claimed.

"It's a freaking rock star," he said.

But is it truly a Mustang?

Some Mustang fans have expressed dismay over the application of the Mustang name to an SUV. But Ford executives insist Mach-E truly deserves the galloping pony logo.

Since there's no engine, electric vehicles don't need a long hood, but the Mustang Mach-E has one. That's a classic performance design cue, but it also helps maintain the Mustang family resemblance. It also has a black rooftop, no matter the paint color on the rest of the car, creating the illusion of a low sloping roofline. The taillights spread out horizontally to increase the perception of width and make the vehicle seem more planted and stable like a sports car.

Unlike most electric cars, the Mach-E even makes a distinctly audible sound because, Ford designers explained, sound is an important part of the Mustang experience. The Mach-E doesn't make a V8 burble, though. The artificially created sound, which can be heard both inside and outside the vehicle, varies to match the Mach-E's acceleration and speed, like an actual engine sound would. The Mach-E's sound resembles an amplified electric motor whir, but with a hint of a rumble.

The SUV will have three selectable driving modes: Whisper, Engaged and Unbridled. Things like the responsiveness of the steering wheel and accelerator pedal, as well the vehicle's interior lighting, the graphic design of the gauges and the volume of the motor sound will change based on the mode selected.

The Mustang Mach-E also has an enormous central touch screen, similar to the screens in a Tesla. Unlike other touch screens, though, the Mach-E has a volume knob mounted on the screen. That was one thing which people really preferred a knob for, Ford designers found.

The Mach-E doesn't have traditional door handles or, for that matter, any door handles at all in the back. The doors are unlatched using electronic buttons. The front doors also have tiny black winglike projections to provide finger holds to pull the door open.

Like Teslas, the Mach-E will also be able to receive over-the-air software updates to improve things like performance and entertainment options.

One feature that will be added later using an over-the-air software update is the ability for hands-free driving on the highway, Ford executives said. That will be similar to General Motors' Cadillac Super Cruise system and Tesla's Navigate on Autopilot. (Autopilot does not allow for extended hands-free driving, though.) Executives did not say when that would be available.

The Mach-E, which will be built in Mexico, will be available next fall, Ford said. The GT Performance Edition will be available in the spring of 2021. Those in Europe and the United States who are interested in buying a Mach-E can make a refundable $500 deposit immediately, though.

'A niche product at best'

Tesla's new electric truck won't be without some stiff competition. It's going up against the two market leaders in full-size trucks in America. Ford is developing its own electric F-series truck, while General Motors, which makes Chevrolet and GMC pickups, also has its own electric pickups in the works. Earlier Thursday, GM CEO Mary Barra said the auto maker expects to begin selling its electric pickup in the fall of 2021. 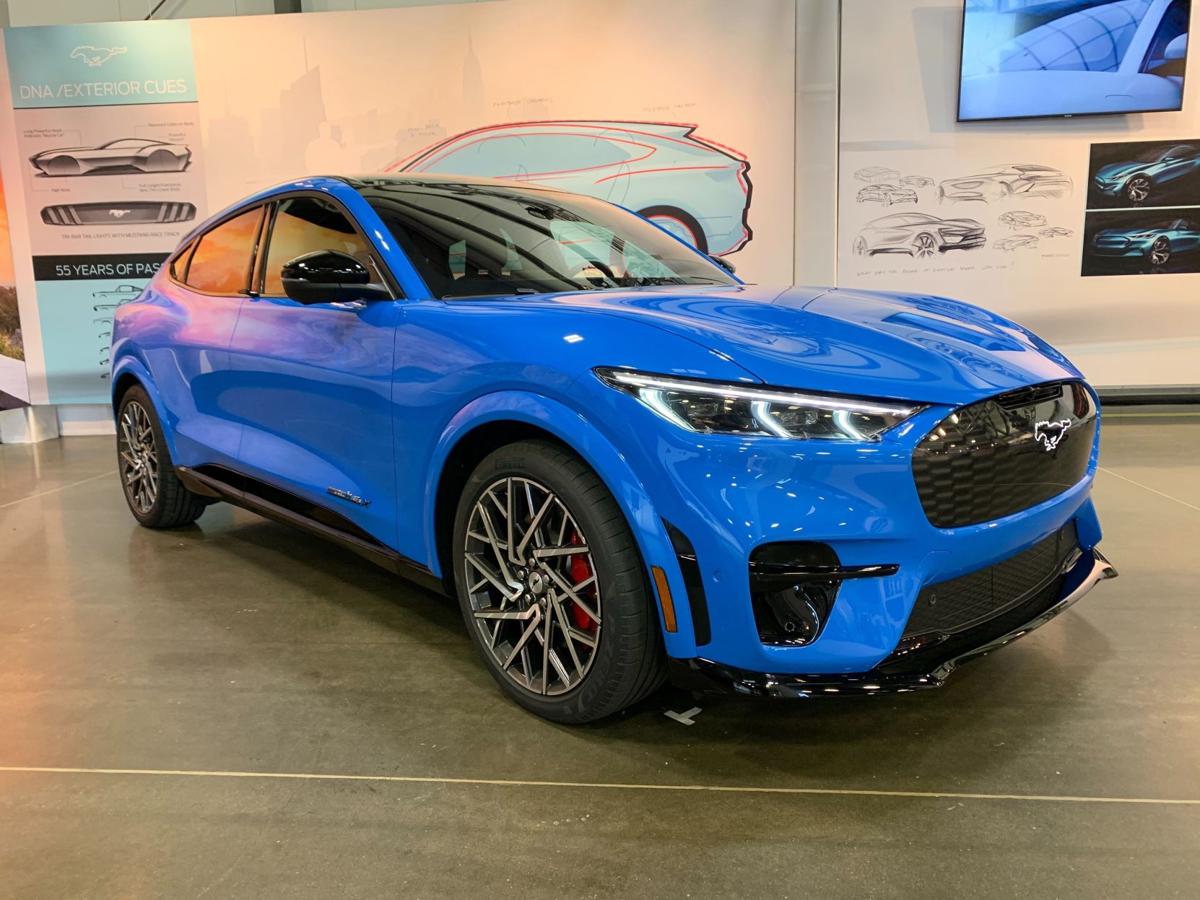 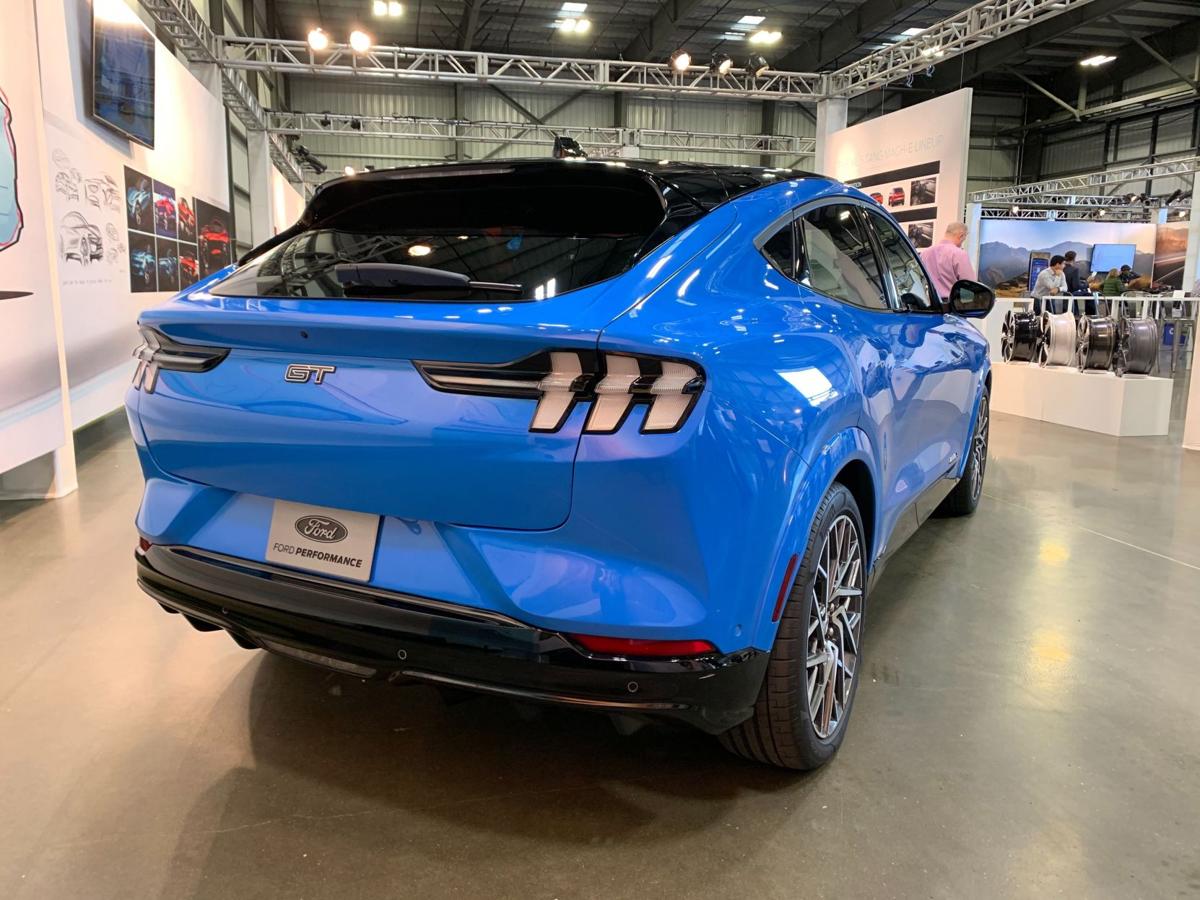 The Ford Mustang Mach-E's taillights are widely spread out to accentuate the crossover SUV's width. 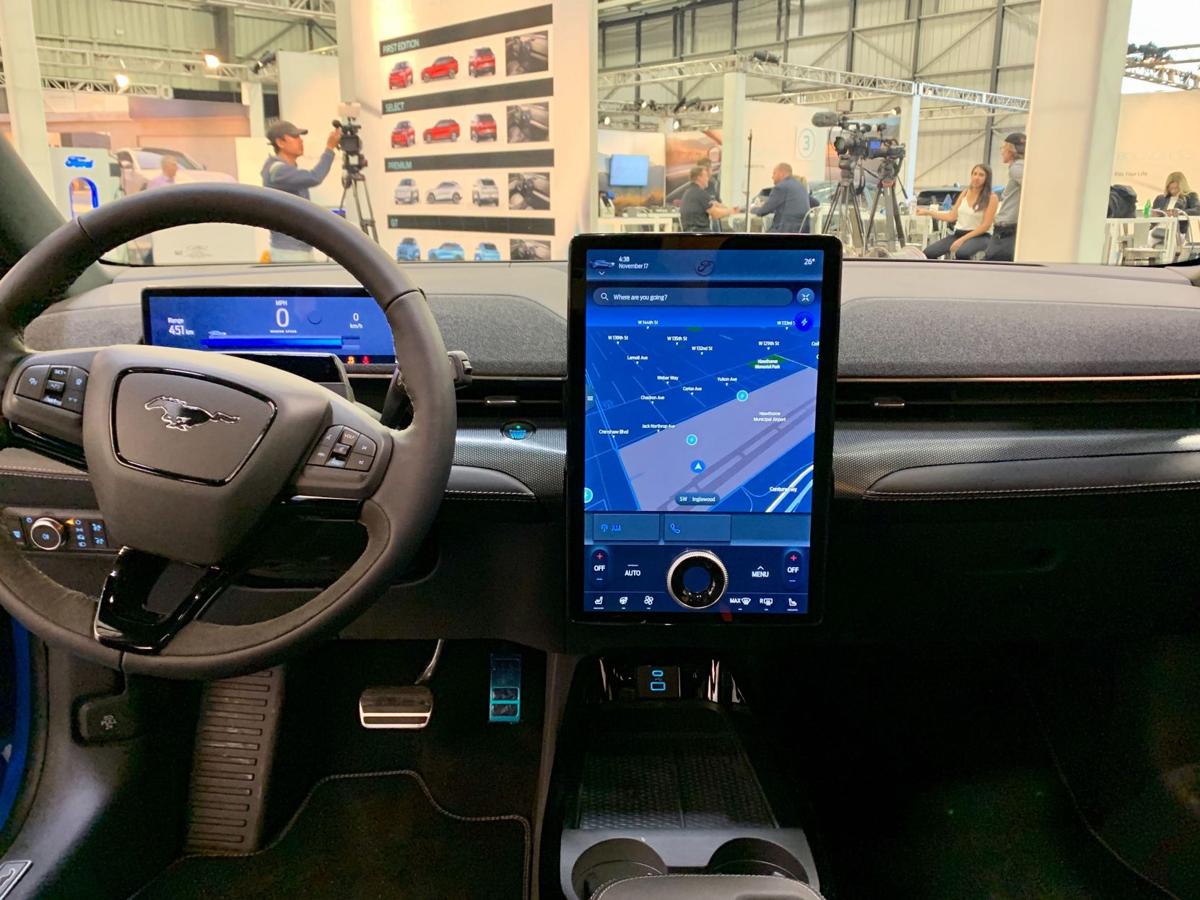 The Ford Mustang Mach-E has a large central touch screen with a volume knob attached. The gauges are rendered on a narrow screen behind the steering wheel.