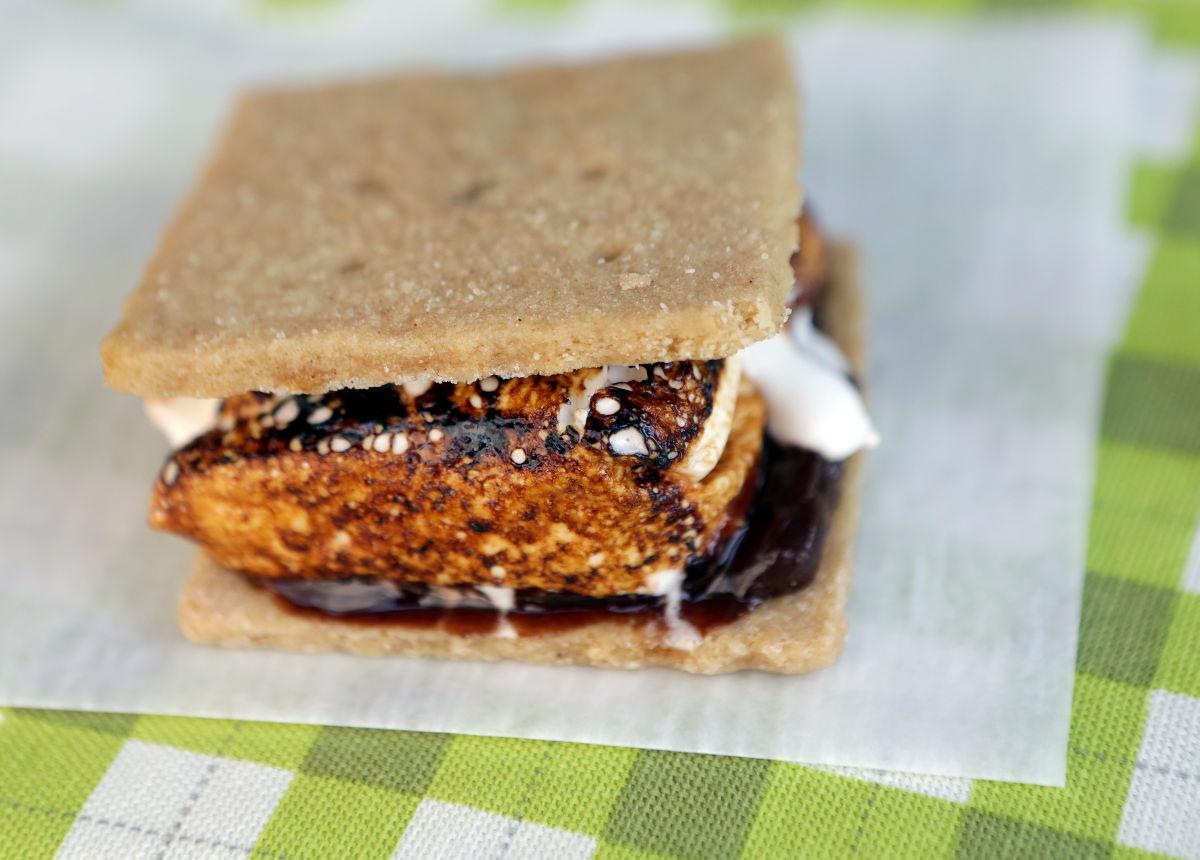 A Classic S'more at Mother Wilma's Marshmallow Factory is served at the Chesterton European Market in Chesterton. 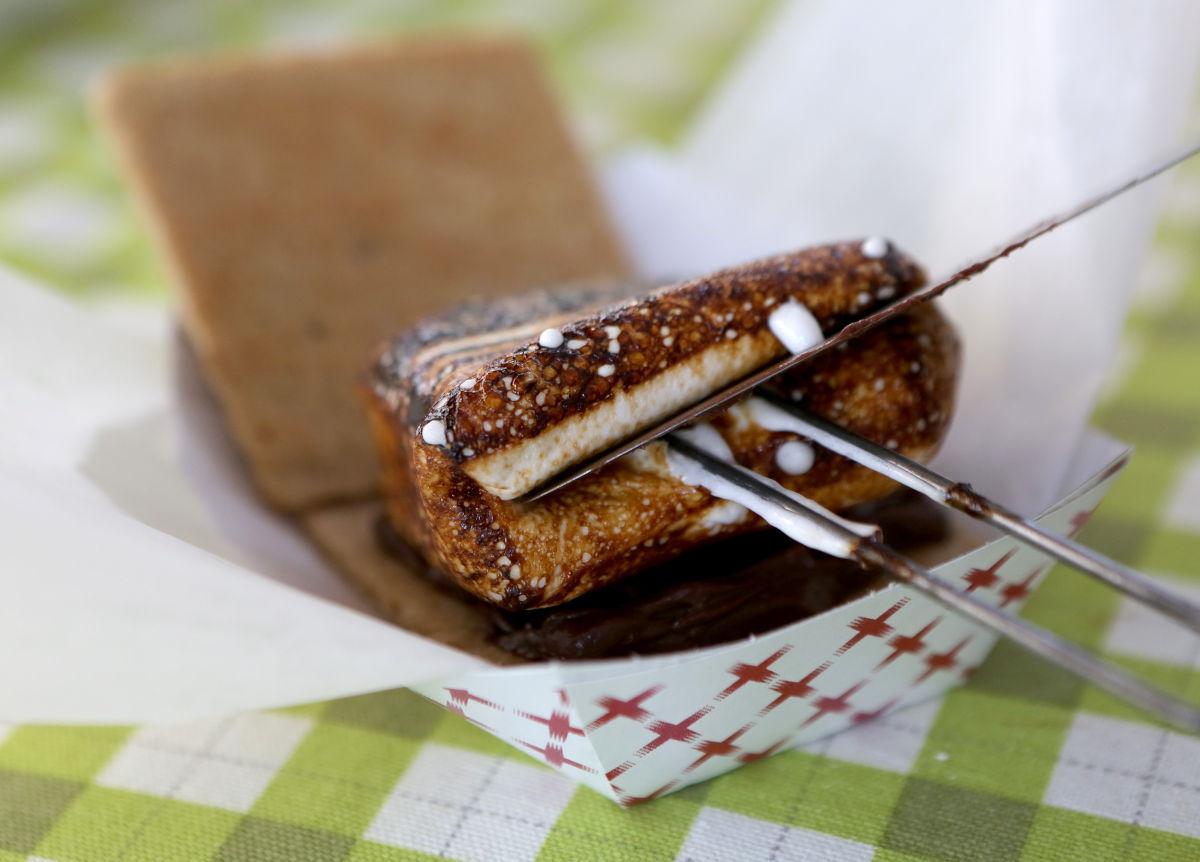 A Classic S'more at Mother Wilma's Marshmallow Factory is assembled at the Chesterton European Market in Chesterton. 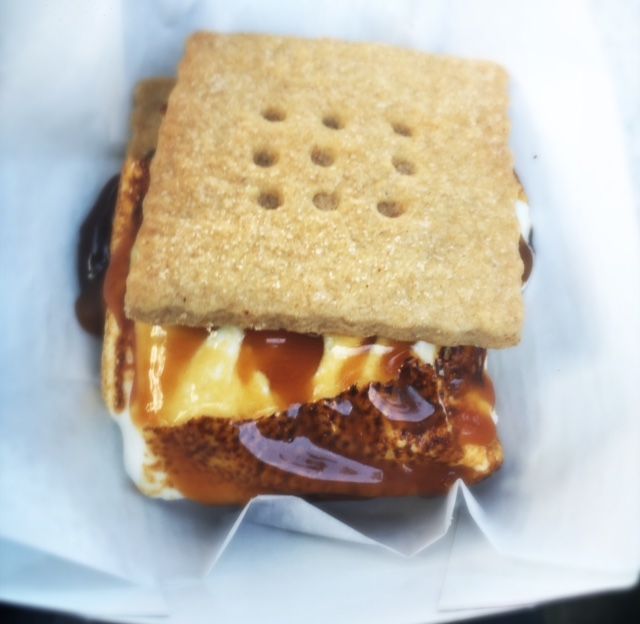 The Salty Dog S'more is served at the Griffith Farmers Market in Griffith. This version is similar to the Classic Campfire but includes a homemade salted caramel sauce and a dark chocolate ganache instead of semi-sweet. 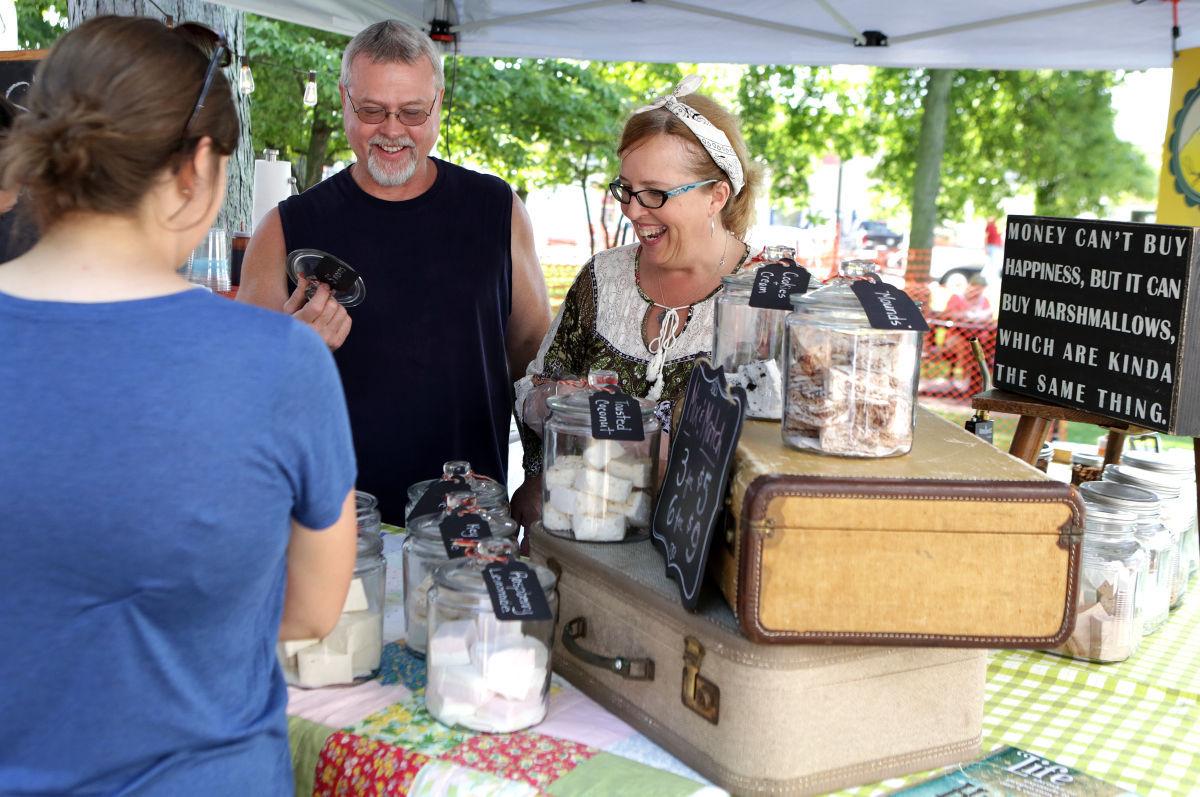 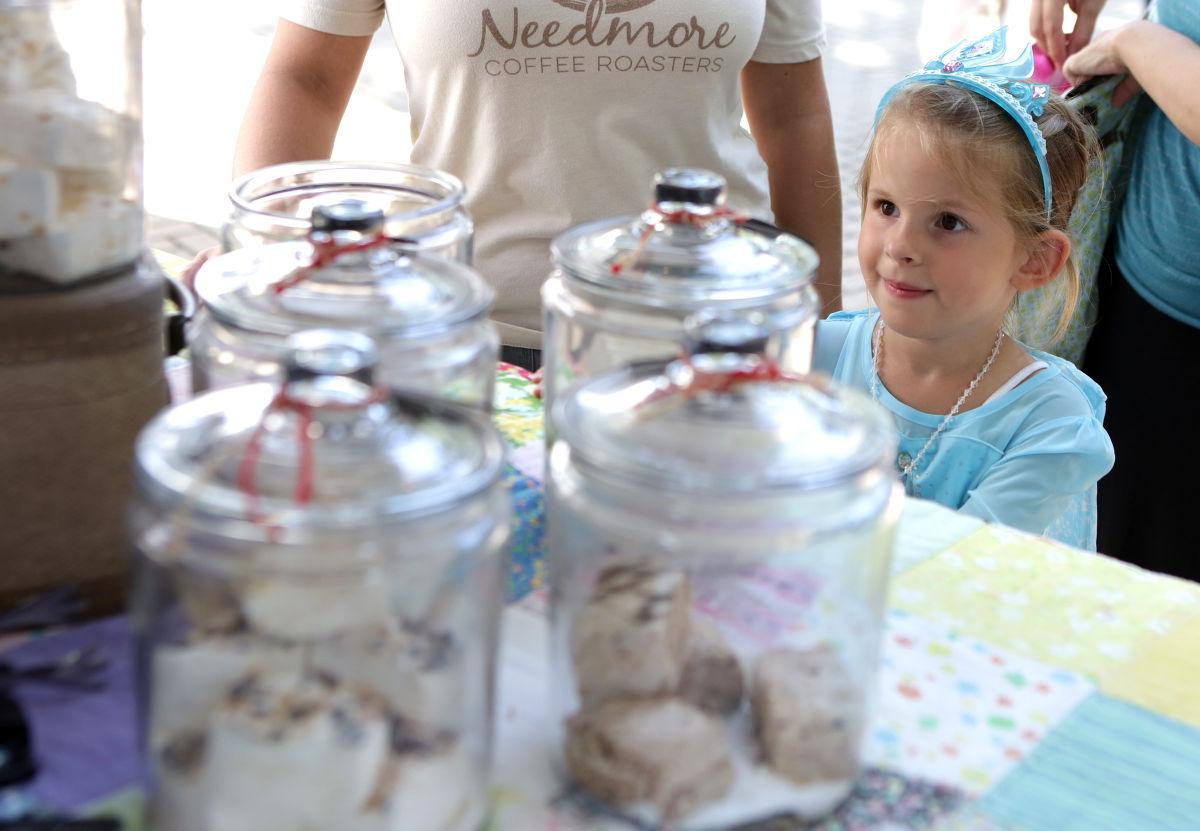 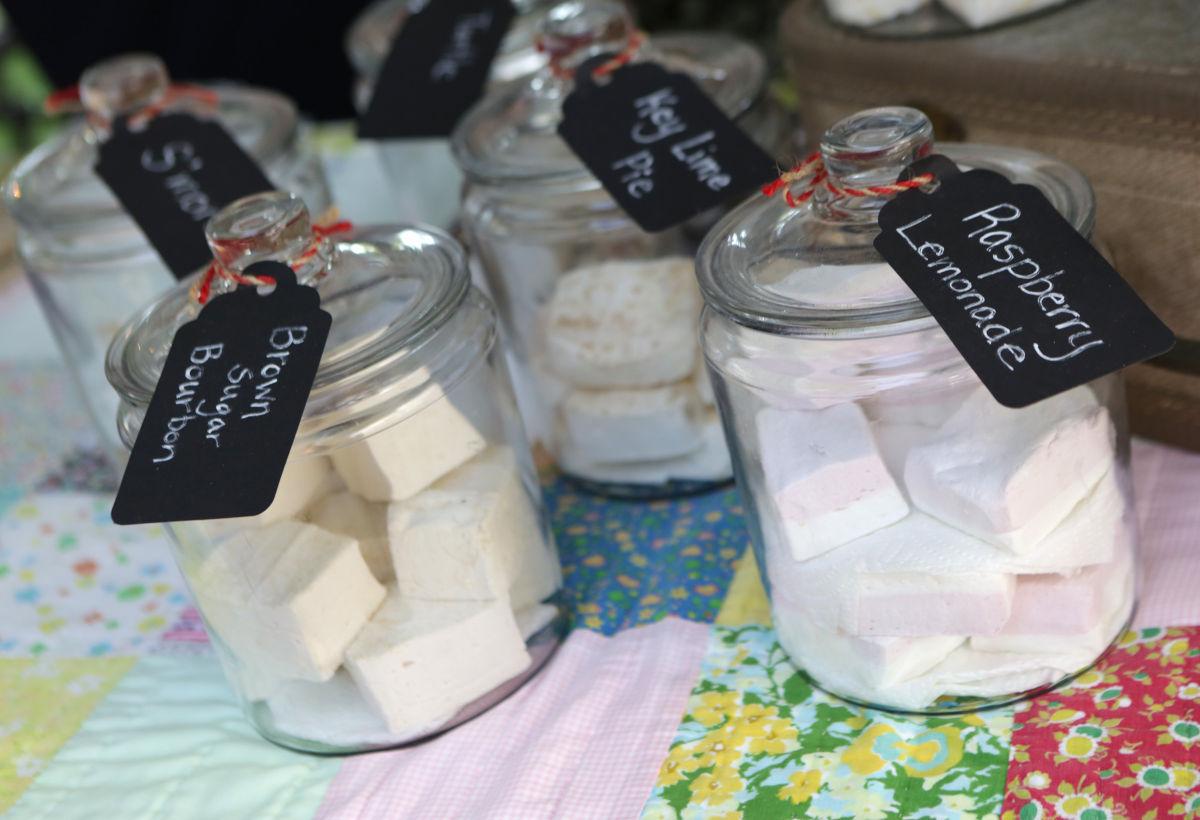 Homemade marshmallows are for sale at Mother Wilma's Marshmallow Factory at the Chesterton European Market in Chesterton.

In less than 10 seconds, Jayme Goffin can turn a block of fluffy homemade marshmallow into gooey decadence with help from a pronged skewer and a propane torch.

The Crown Point woman runs Mother Wilma's Marshmallow Factory, a marshmallow business that started popping up at local markets and fairs since November. S'mores are among the popular items on her menu.

"We roast them right there," she said.

At $5 apiece, the creations come with a "mess kit" of a napkin, fork and wet wipe. The idea is to "savor the mess, eat the love," a catchphrase served with every order.

"I make my own chocolate ganache for the S'mores," Goffin said.

The Squirrel adds chunky peanut butter to the aforementioned treat. The popular Salty Dog is similar to the Classic Campfire but includes a homemade salted caramel sauce and a dark chocolate ganache instead of semi-sweet.

Goffin creates the marshmallows, ganache, graham crackers and other items in a commercial kitchen at a nearby church. A self-described "snob" when it comes to food, she insists on using high-end ingredients such as Ghirardelli cocoa. She also makes her own graham crackers, using honey produced in bee hives in her backyard.

"I always love giving homemade gifts for Christmas," she said.

For a dozen years, she'd pull together a hot chocolate mix and add her homemade marshmallows based off a recipe by celebrity chef Alton Brown. She brought a batch on a camping trip with friends, who said they were the best marshmallows they'd ever tasted. A friend who runs the popular local Hunt and Gather event suggested Goffin bring her talents there.

"It was so well-received there," she said. "The next thing I know, I'm doing five markets a week."

Goffin tinkered with recipes all winter and spring, using trial-and-error on flavors and textures. Now, she has more than 20 flavors and a line of S'mores combinations.

"Most people say, 'I didn't even know you could make your own marshmallows,'" Goffin said.

A common question is: What do you do with them?

"You eat them," she said with a laugh. "People think you just roast a marshmallow, but in all my marshmallow research, I found that, in Europe, they have marshmallow shops and they're saying marshmallows are the new cupcake."

Goffin said she's blessed and grateful for the surprise success. She's already had franchise inquiries, but the former band saw operator needs to assess how it fits into the Martha Stewart-type life she's created in Crown Point.

"I have a nice, quiet life with my chickens and my bees and my garden," she said. "I fell in love with that lifestyle."

Her yellow business cards even feature a sketch she did of a cartoon chicken holding a marshmallow on a stick.

Mother Wilma's Marshmallow Factory initially was known as Melt, which had a fancy, gourmet feel. It wasn't the right fit, Goffin said.

"I quickly realized I felt like I was wearing high heels, when I'm kind of a Converse girl," she said.

Potential customers passed over her booth, thinking the jars of marshmallows were soaps. Instead of chasing them down, she changed the name. It's in honor of her favorite aunt, the late Wilma Keckler.

"She inspired me so much," Goffin said, recalling her cooking skills. "She could make a biscuit that would float off your plate."

Keckler's son Jim Keckler is in town visiting and has been helping staff the booth, a task Goffin's husband Glen Goffin handles.

Crown Point resident Pam Sertich is acquaintances with Goffin. Saturday, she stopped by her marshmallow booth at Chesterton's European Market for a treat.

"They're very fresh, and I like the different flavors," Sertich said. "It's something different, not quite as sweet as candy."

They're fluffier than packaged marshmallows found at grocery stores, she said. She walked away with a handful of flavors Saturday, including key lime and brown sugar bourbon.

"My father keeps raving about these marshmallows," she said.

Goffin hopes to have a website ready by the end of the month. In the meantime, her schedule can be found by searching for Mother Wilma's Marshmallow Factory on Facebook. She recently started an account on Instagram.

Have a sweet holiday: Whip up these Fourth treats

Creating 4th of July fun foods for kids and parents to make can be as easy as using red, white and blue.

A Classic S'more at Mother Wilma's Marshmallow Factory is served at the Chesterton European Market in Chesterton.

A Classic S'more at Mother Wilma's Marshmallow Factory is assembled at the Chesterton European Market in Chesterton.

The Salty Dog S'more is served at the Griffith Farmers Market in Griffith. This version is similar to the Classic Campfire but includes a homemade salted caramel sauce and a dark chocolate ganache instead of semi-sweet.

Homemade marshmallows are for sale at Mother Wilma's Marshmallow Factory at the Chesterton European Market in Chesterton.