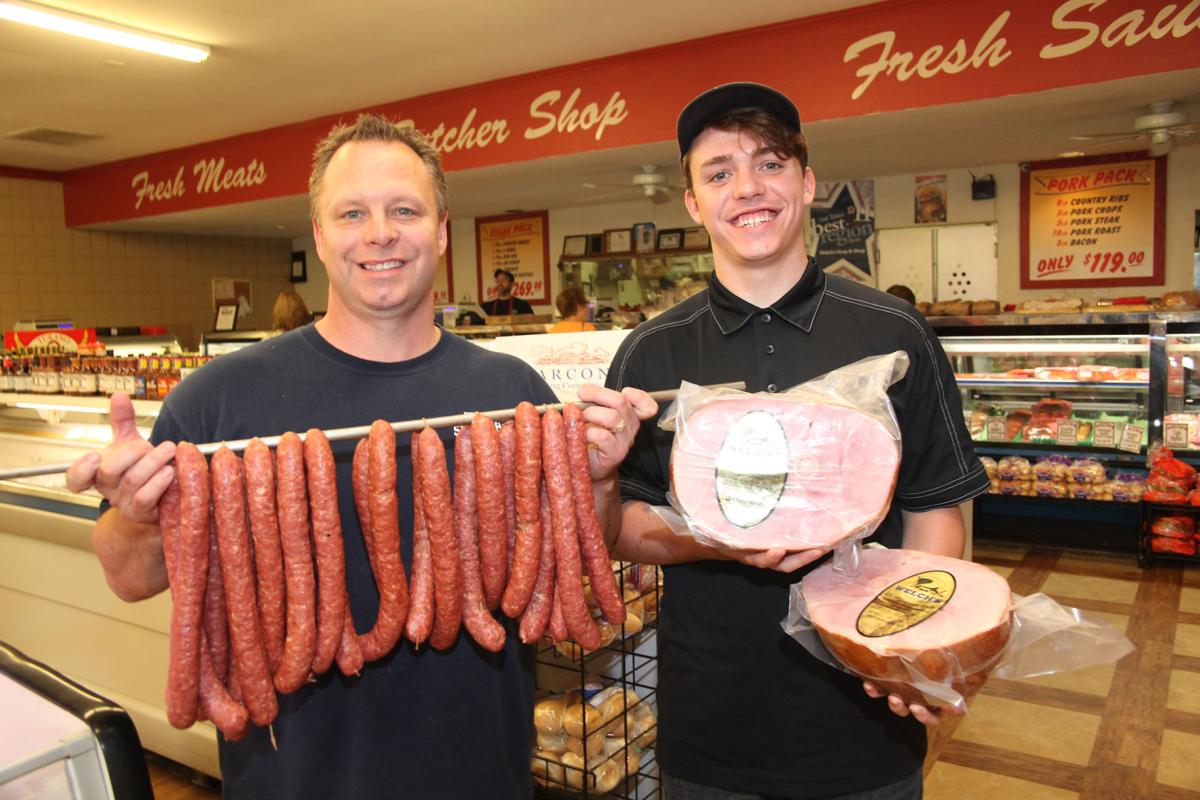 Ed Welch and his son Griffin display Polish sausage and ham, which are holiday best sellers at Welch's Stop & Shop in St. John. 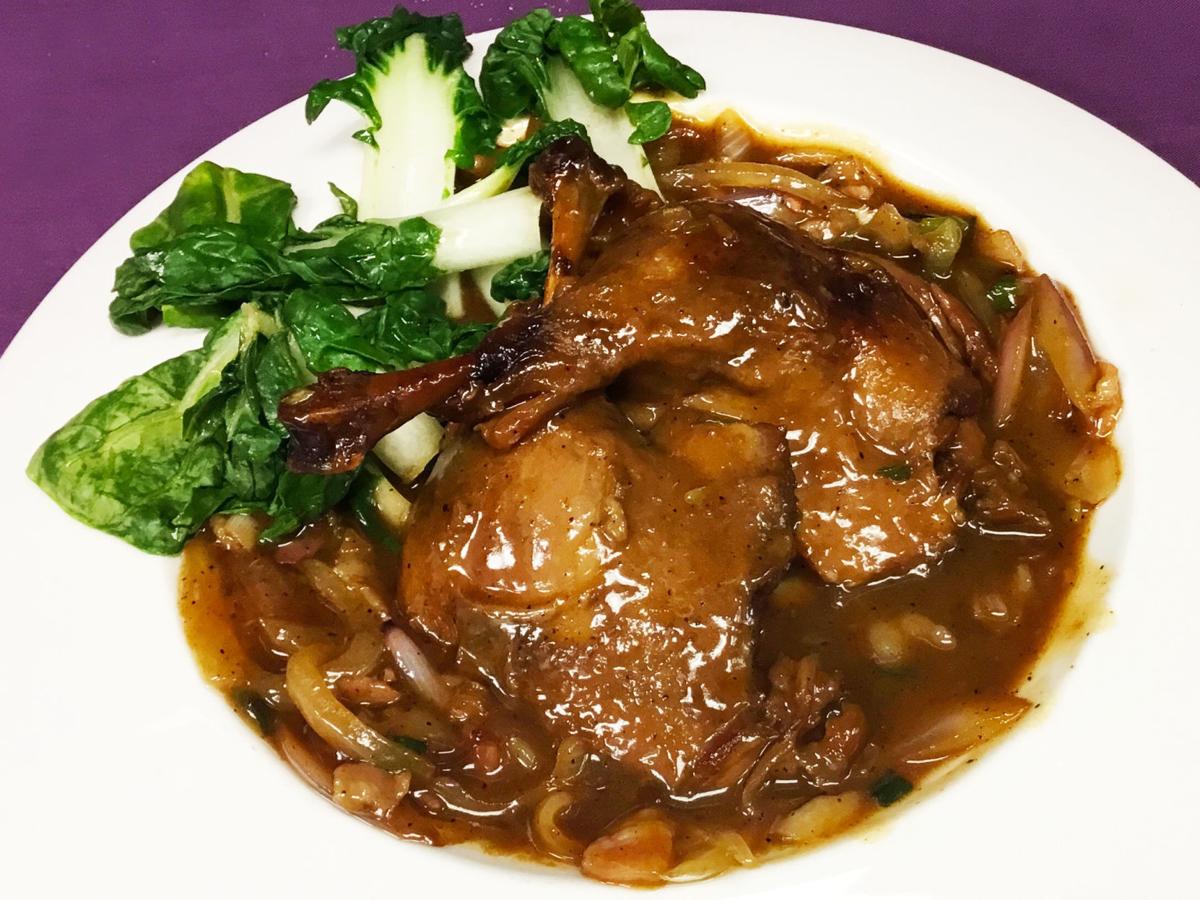 When the holidays draw nigh, Welch’s Stop & Shop, located at 11333 West 95th Place in St. John, is deluged with orders for turkeys, but that’s not all—more and more home cooks are choosing alternatives to the traditional roast bird.

“Our hams, which we have made and cured for us, are big sellers for Thanksgiving and Christmas,” says Ed Welch, a partner in this third generation family business founded in 1953. “A lot of people serve sauerkraut and our Polish sausage, which we make fresh daily for holiday meals.”

Welch’s sells both regular and smoked Polish sausage that’s made in-house in one of the two smokers on the premises (one is large enough to hold logs and the other uses wood chips). Both impart a smoky flavor that accents the taste of meats they sell.

For beef lovers, Welch says they offer prime rib, roasts and steaks cut to order. And though they’re not made on-site, Welch says they can order “turduckens,” the Louisiana dish said to have been invented by the master of Cajun cuisine, Paul Prudhomme. Rich in flavor and spice, this unusual dish is exactly what it sounds like: a boneless chicken stuffed inside a boneless duck inside a boneless turkey, usually with a cornbread or other traditional Southern-style stuffing inside.

From Traditional to Vegan

“We actually have a vegan turkey option on the menu during the holidays,” says Teresa Connell, a cook at Tiger Lily Café, located at 1505 South Calumet Road in Chesterton. The restaurant offers traditional, vegetarian and vegan dining options. “We do it like the traditional turkey dinner but our rolls are made by our vegan baker and instead of chicken broth for making the gravy and stuffing, we use vegetable broth.”

Also on the menu around holiday time is Tiger Lily’s pork roulade—a pork roast which is pounded very thin and spread with a layer of chopped apples and onions accented with sage. The filled meat is rolled up, and slowly braised before being sliced and served.

“They’re very similar in texture and flavor to non-vegan pumpkin pies,” she says. “But we use organic pumpkin puree and substitute coconut milk for cow’s milk. Regular pumpkin pie filling is thickened with eggs, but since we don’t use eggs in vegan cooking, we substitute cornstarch to make it thick.”

In this recipe, the confit, traditionally a French dish, also incorporates the flavors of both Pham’s native Vietnam as well as Thai cookery, with the addition of soy and oyster sauce, bok choy (a type of Chinese cabbage commonly available in supermarkets), Chinese five spice powder, and mango puree. In all, it reflects the Asian and European culinary legacies found on menu items at both her restaurants.

4 duck legs, with thighs (trim excess fat to use later)

Trim excess fat from duck legs and thighs and reserve for later use. Assemble all marinade ingredients and mix together. Marinate the duck legs in covered container in refrigerator for 24 hours.

After 24 hours, when ready to cook the marinated duck, preheat oven to 225 degrees. Drain marinade and reserve for later.

Dice bacon and cook with duck fat in large frying pan that can be transferred to oven. Be sure the pan is big enough to hold all the duck parts as well as the marinade.

Place the duck, skin side down, in frying pan with the cooked bacon and duck fat. Cook for 10 minutes at medium-high heat. Flip duck legs over and cook on the other side for another 5 minutes. Pour all the marinade sauce over the duck in the pan. Cover and cook an additional 10 minutes, then place pan into the preheated oven and cook 2 -3 hours until the duck meat is tender and juicy and easily pulled from the bone.

Remove duck from oven and remove meat from the bones. Steam the bok choy. Plate the finished duck atop and alongside the steamed bok choy. Serve.

Have you ever seen a Taj Mahal haircut?

10 features people look for when buying a car

10 features people look for when buying a car

Why Americans are changing their home decor

Why Americans are changing their home decor

Our sense of smell is more closely tied to memories than any other sense.

Turkey stuffing tips from the experts

We turned to a few Northwest Indiana restaurant owners who shared their turkey stuffing methods along with a few tips.

NEW ORLEANS — For the first time, a new drug given along with a cholesterol-lowering statin medicine has proved able to shrink plaque that is …

Ed Welch and his son Griffin display Polish sausage and ham, which are holiday best sellers at Welch's Stop & Shop in St. John.